No matter what happens on the March 19 special election in Cedar Falls, you certainly can’t say the Democratic Party didn’t do what they could to hold Senate District 30. Presidential candidate after presidential candidate has visited Black Hawk County over the past month to rally volunteers and voters, mobilize students to vote, and knock on doors.

The party has been working overtime to hold on to a key suburban swing district in Cedar Falls and Waterloo. Democratic State Senator Jeff Danielson abruptly resigned in mid-February over a dispute with his firefighting job and the city. The seat has trended toward Democrats in recent years (Fred Hubbell won it 53% to 45% in 2018), but Republicans have a strong, well-known nominee in former State Representative Walt Rogers.

The political mania hit its peak this weekend with four presidential hopefuls stumping for Democratic candidate Eric Giddens, a local school board member who couldn’t imagine what he was getting himself into when he got nominated for a special election during Iowa Caucus season. On a sunny Saturday afternoon, Giddens spoke from the back of a pickup truck to a crowd of 300, including a large contingent of national and international press, with Beto O’Rourke standing behind him.

“This is such a humbling experience,” Giddens said, ticking through education and clean energy priorities for the Cedar Valley. “From pre-K all the way up through our regents universities, we have to fully fund and support our public education. That’s why I’m in this. I care about this community.”

The Presidentials Pitch In

O’Rourke’s visit brought out the most people and press, but Giddens has seen a steady stream of national help since being nominated three weeks ago.

Elizabeth Warren was the first to lend a hand in person, helping kick off a canvass launch with Giddens two weekends ago. Eric Swalwell came in the next day, followed soon by Steve Bullock and John Hickenlooper, who both spoke with students at a bar just off campus. Andrew Yang helped push UNI students to their satellite voting location earlier this week. Kamala Harris had initially planned a visit herself, but a blizzard a few weeks ago scrapped that part of her Iowa trip.

This weekend saw John Delaney out knocking doors for Giddens, and O’Rourke escaped the rabid press corp following just long enough to hit a few houses, surprising one local student who opened her door. Amy Klobuchar helped send off a wave of volunteers on Saturday morning, and Cory Booker plans to rally locals and knock some doors this afternoon.

Several candidates also recorded short videos to encourage students and local voters to turn out, including Kirsten Gillibrand, Booker, Warren, Klobuchar, and O’Rourke. And nearly everyone who has staff placed in Iowa sent their teams up to Black Hawk County to help out over the past month. That gave Democrats a huge advantage in the ground game for what is typically a low turnout election. It’s also expected that Bernie Sanders will use his massive email list in some way to mobilize his supporters in the area. 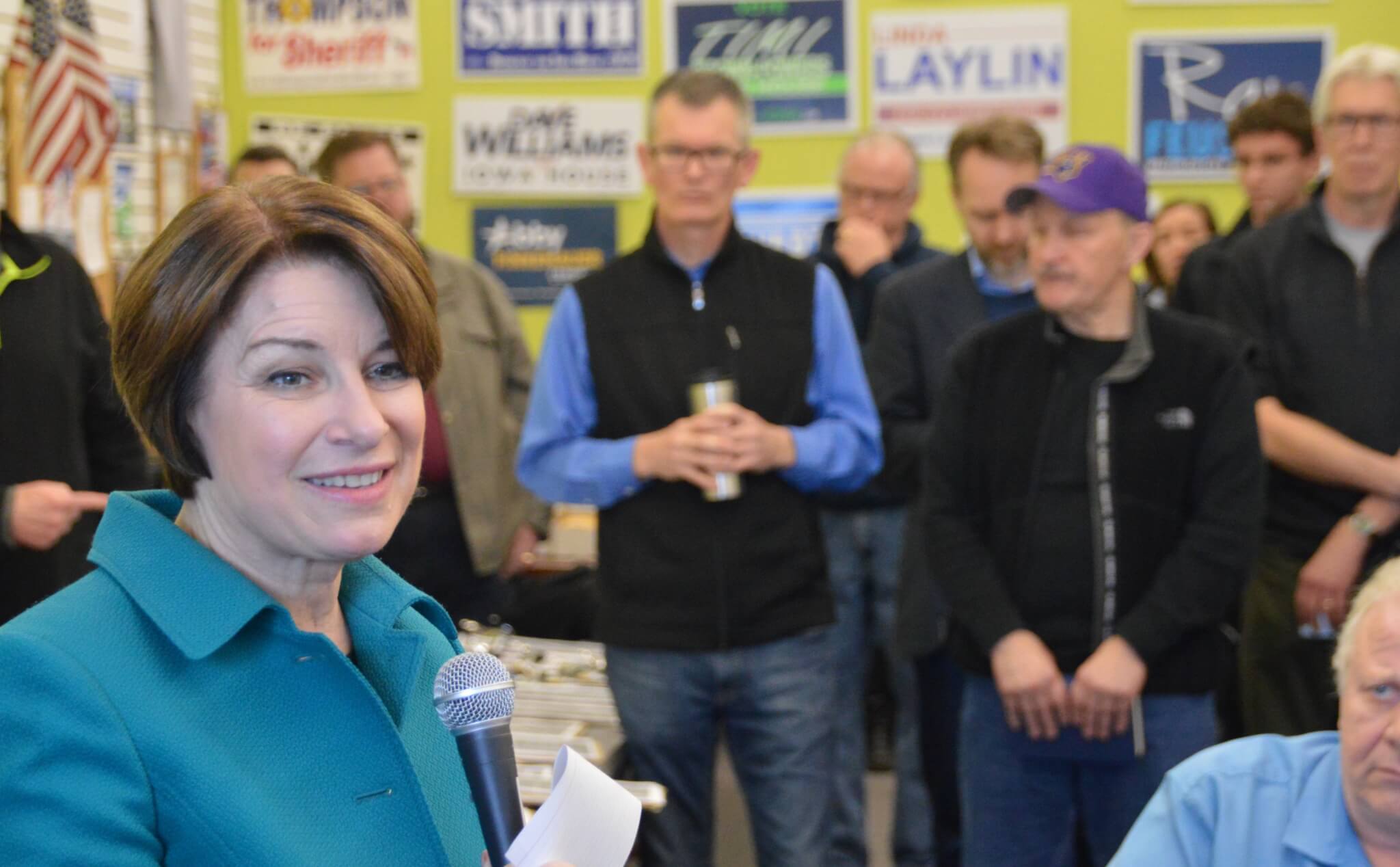 The controversy that kicked off the SD 30 race was Republican Governor Kim Reynolds’ decision to schedule the special election date in the middle of UNI’s spring break. The university’s student body has moved significantly to the left in recent years, giving Democrats a solid voting base here to rely on.

But so far, student turnout has been very impressive. With just two days of satellite voting at UNI before spring break, over 863 people voted on campus. Considering special elections like these may only see turnout of a few thousand voters, that’s an important number. And over 30% of the people who have already voted in the special election are under the age of 25.

Without national figures from their own side coming in to boost base turnout, Senate Republicans and Rogers’ strategy is focused on incendiary TV ads to mobilize hardcore conservatives. They’re running two ads attacking Giddens.

The first ad called Giddens a socialist over his past donations to Sanders, while images of Warren, Sanders, and Alexandria Ocasio-Cortez pop up in the background.

Such attacks are clearly aimed at riling up the Republican and Trump base in the area, which might make sense for some low-turnout special elections. But those races typically see lower participation because they only last a few weeks and receive little attention. The SD 30 race, with constant visits from presidential candidates, has garnered non-stop news.

So, these types of over-the-top messages, which could easily turn off suburban and more-educated swing voters (which is essentially the main electorate in SD 30), may not work as well if there’s high turnout in this race. But if Rogers does emerge victorious, it could get interpreted as a warning sign to national Democrats and the 2020 field – that these attacks on socialism and abortion laws are salient.

Both sides are essentially flying blind into Tuesday’s election. With only a little over three weeks of campaigning, there wasn’t any real polling done, not that it would have been too effective with such uncertain turnout.

Giddens could end up winning comfortably, buoyed by excitement in the Democratic base, a robust ground game boosted by presidential campaigns, and the district’s newly left-leaning tilt. The attempt to suppress the student vote could backfire badly, having only encouraged more students to get to the satellite voting locations and backing the Democrat in a lopsided manner.

Or it’s entirely possibly that Rogers comes out on top. While despised by Democrats for his private schools push while in the Legislature, Rogers is a well-known name in the Cedar Valley who won very tough races before. As long as he gets all of his friends and neighbors out, leveraging his connections he made while serving in the Iowa House, that could be enough for a low turnout election.

1 Comment on "The Cavalry Arrives For Democrats’ Special Election Candidate"