She’s the presidential candidate that you may not have heard about, but millions of others outside the usual political circles have. Marianne Williamson, who has over 2.6 million Twitter followers, a collection of best-selling books, and frequent guest appearances on shows like Oprah’s, crisscrossed Iowa this week as part of her official White House run kick-off tour.

The author of many spiritual and self-help books like A Return To Love, Williamson knows her candidacy doesn’t follow the traditional route, but in a wide-open year like 2020, that’s not deterring anyone.

“I know there will be 1,736 people who will be running for the Democratic presidential nomination, and I’m just honored to be one of them,” she joked in Iowa City.

She also believes it’s exactly someone outside of the regular political establishment that can break through this year.

“The election of Donald Trump proves that people’s feelings really do matter,” Williamson said. “The fact that both political establishments on the left and the right were gobsmacked by his election proves my point. They were not seeing anything beneath the waterline … The chronic economic despair of millions of Americans was going to make itself heard. It was going to make itself heard either in a populism that was progressive or a populism that was authoritarianism.”

Subzero temperatures kept some away from her evening kick-off in Des Moines on Thursday, but as the weather warmed, so too did the crowds. Over 100 people packed in to Iowa City’s Prairie Lights Books on Saturday to listen to Williamson’s presentation. She also held a series of house parties during her three-day trip. Williamson’s stump speech isn’t your usual Iowa Caucus fare, but it is engaging. Part sermon, part history lesson, part rally cry, Williamson typically starts out with a 30,000-foot view of where American democracy and culture currently stand. Asserting that America now functions as a “corporatocracy or an oligarchy,” she lays out how the country has drifted toward authoritarianism before positioning the people – and herself – as the solution to fight back.

Describing herself as a “pretty straight-line progressive democrat,” Williamson ticked off a host of policy priorities, though didn’t go too deep into them during her stump speech. Those issues include a $15/hour minimum wage, universal healthcare, wealth inequality, climate change, and student loan debt.

One topic she expands on is one that’s gotten her some national attention in recent days: reparations for slavery. She suggests the federal government pay anywhere between $100 billion and $200 billion to descendants of slaves.

“People tell me you can’t talk about reparations for slavery in Iowa,” Williamson noted. “Well, watch me, and, by the way, you applauded.” Other issues get touched on as well, from reducing America’s number of nuclear bombers, to putting preschool teachers on economic councils, to institutional racism, to increased funding for the State Department.

All of it largely tied back to Williamson’s bigger vision of kicking off a revolution based on love to change American government and society. 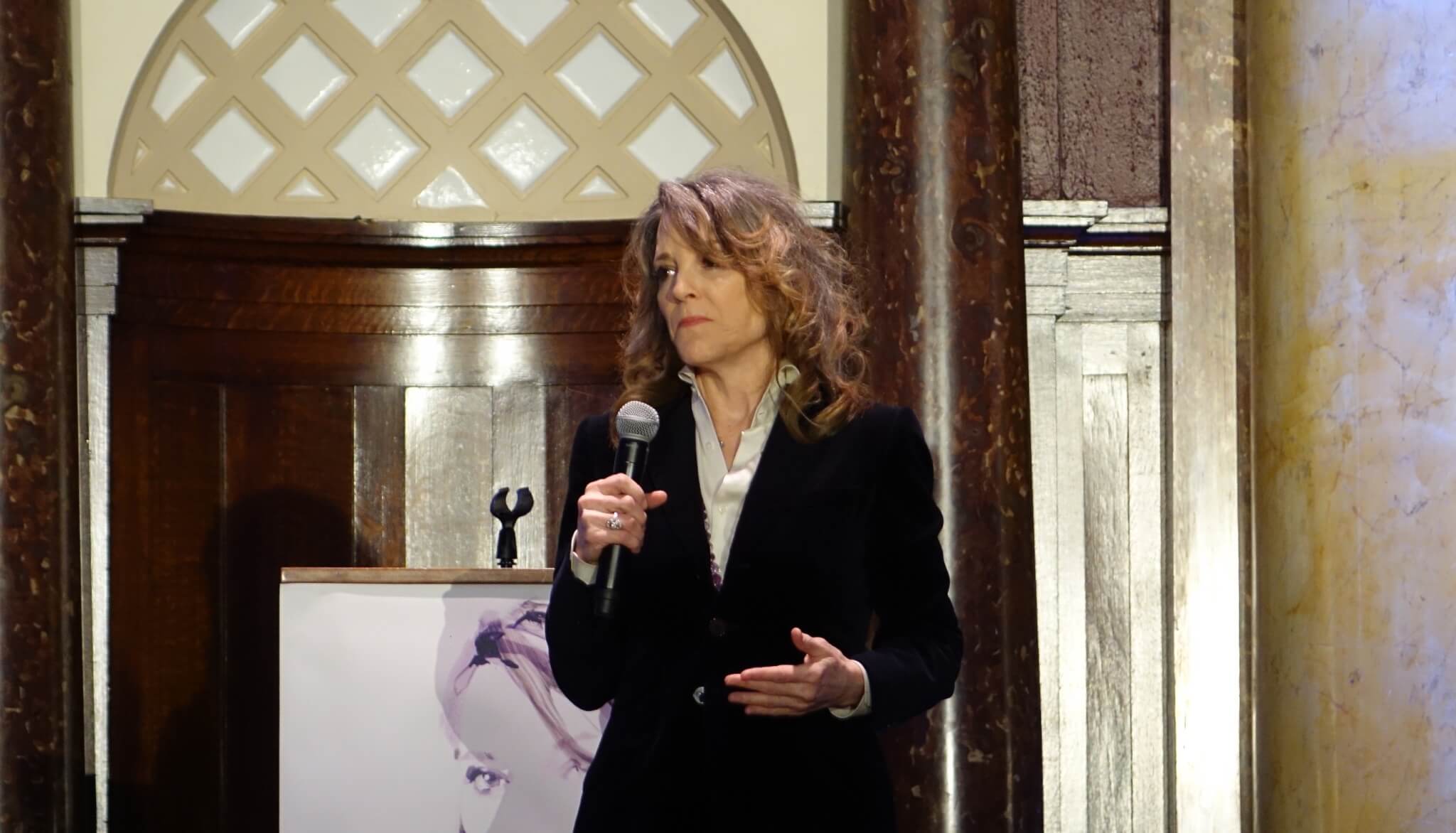 While it’s still plenty early in the caucus process, there were a good number of Williamson fans at her kick-off.

“It’s really the philosophy that she represents,” Blake Long, who attended the Des Moines event and was already familiar with her books, explained. Long said Americans need to learn to be more respectful of each other, and that Williamson fits that bill.

“I’m with her ‘til the end,” added Jake McCoy. “The way she articulates every issue, it’s something to aspire to.” How much broader attention Williamson will attract during her run is yet to be seen, though she starts off with a loyal following. Some volunteers from Fairfield, home to many people who follow the mindfulness way of life that Williamson promotes, came along to help.

4 Comments on "Love, Reparations, And Fighting Back: A Marianne Williamson Iowa Tour"