New York Senator Kirsten Gillibrand made her inaugural visit to Iowa this weekend, forging through a snowstorm to meet local Democratic activists here for the first time. She delivered an impassioned speech at the Iowa Women’s March, shared a beer with Des Moines caucus-goers at a brewery, and hosted meet-and-greets in coffee shops in Sioux City, Boone and Ames.

Starting Line sat down with Senator Gillibrand this afternoon for an interview. The following is the highlights of what we spoke about, along with a couple photos from today’s events.

You’ve only been in Iowa a day and a half, but what have you learned and enjoyed so far?

I’ve learned so much. I really enjoyed meeting Iowans because they’re so concerned about the future. They asked really good questions. They have very strong opinions. They want to be involved, they want to be heard. I think that’s what makes our democracy strong … It’s been really inspiring and fun. I got to bake cookies today! [She stopped in at a cooking store in the East Village].

This afternoon, Donald Trump is rolling out his new proposal for ending the shutdown. It’s not clear what all is in it just yet, but it sounds like he’s suggesting an extension of DACA for three years in return for funding for the wall.

I think Congress has been really clear. Speaker Pelosi and Democrats in the Senate have been very clear. Let’s open the government, let’s pass these basic budgets, and then talk about immigration reform, talk about the hard issues that we need to bring the country together.

Unfortunately, this is all about President Trump. He wants his way. It’s not about the people he’s serving. It’s about him. That’s why people are getting very angry. 800,000 people are going without a paycheck right now …

I think Democrats in general would support some sort of border security. I just think the wall is ineffective. It’s a waste of money … You can invest in an asylum system that actually works and an infrastructure that cares for people when they come here seeking our refuge. 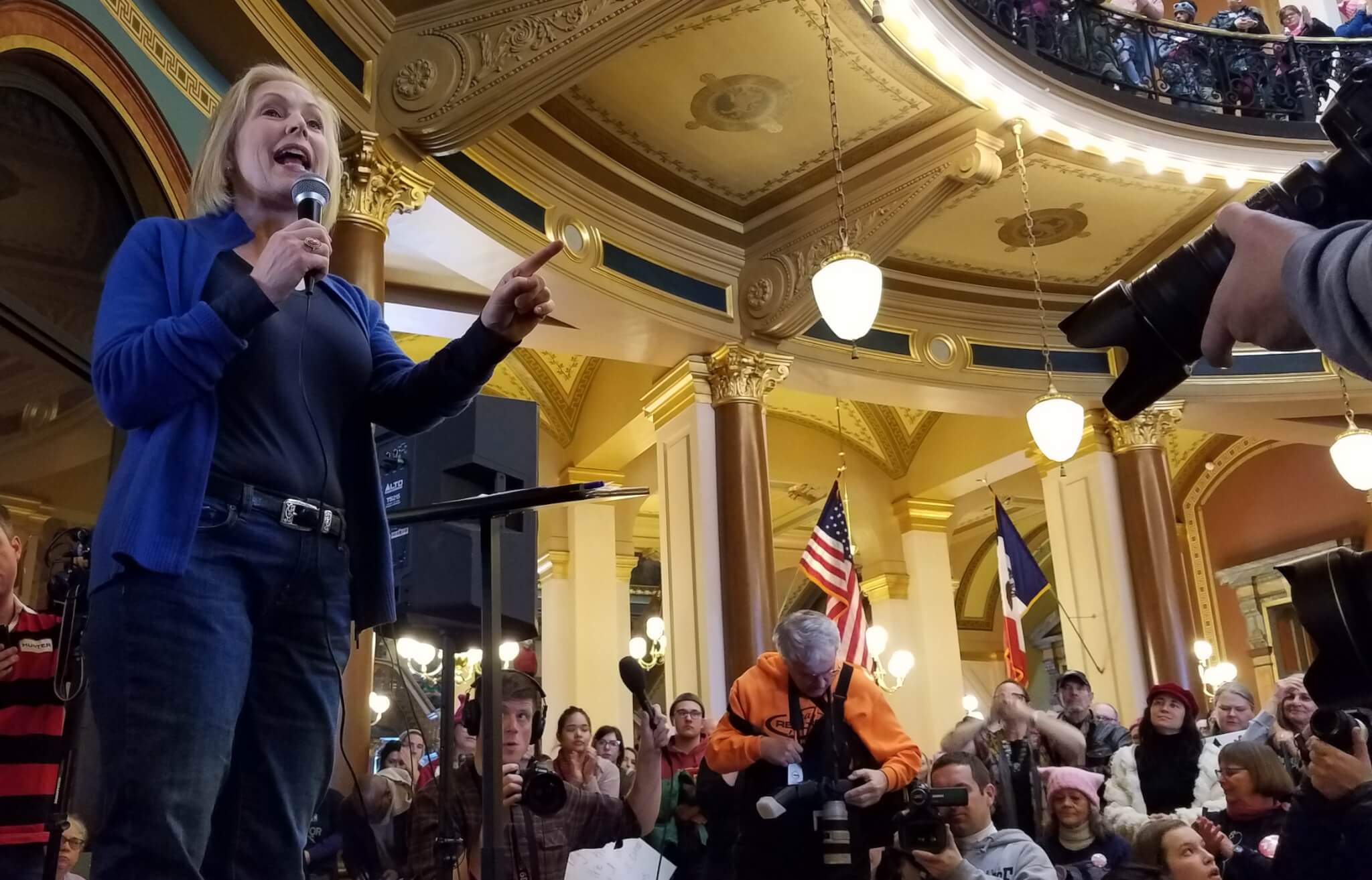 You’d stop spending the money on that thing. I think there is a compromise to be made, but I really wish he’d just open the government and give us time to do those compromises. We can come together. There is common ground …

The fact he’s willing to talk about DACA is good. Because that’s one of the things Democrats would be grateful to do, but we would not want it for a couple of years. We’d want it permanently. 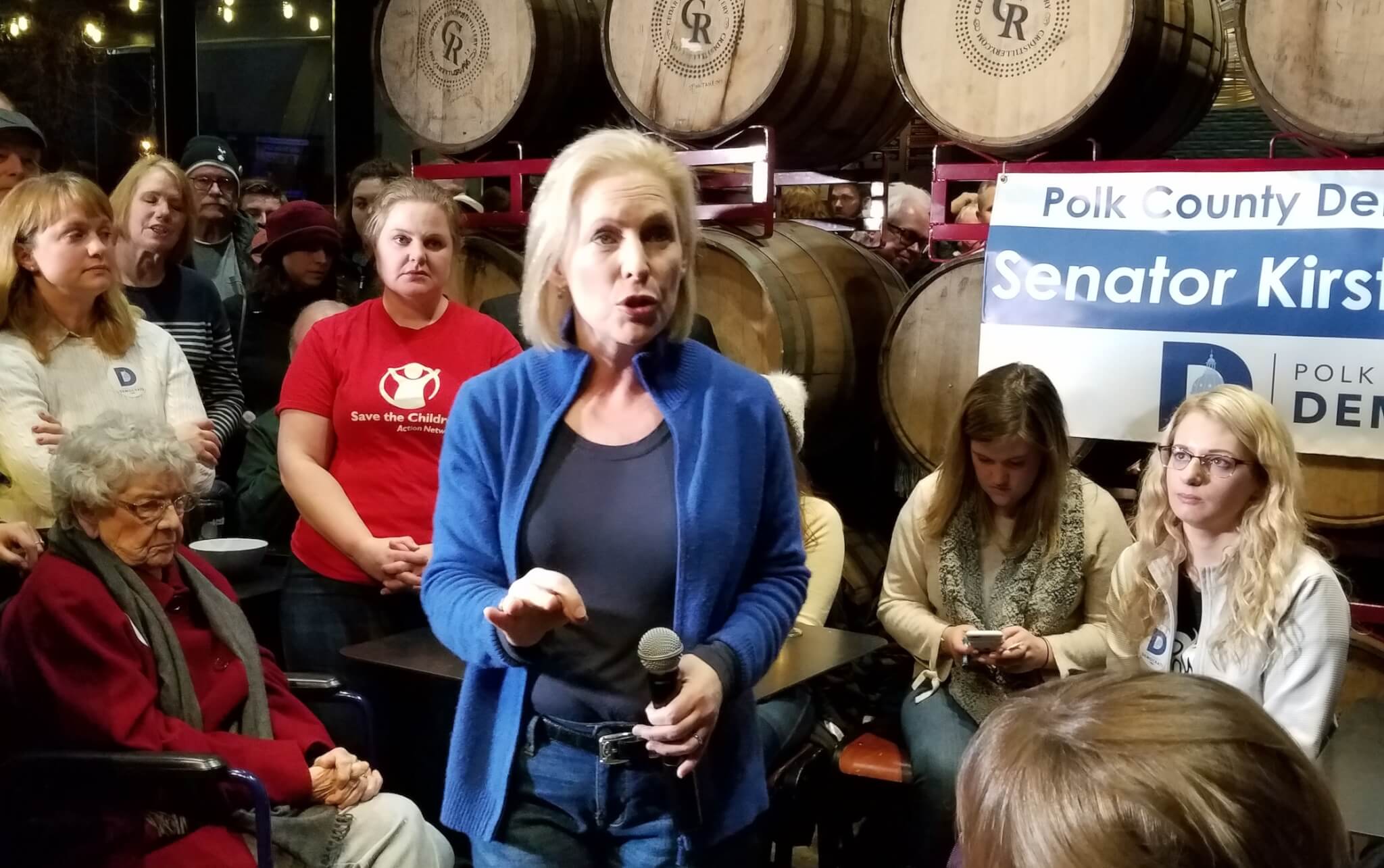 It looks like we’re going to have a decent number of women running for president on the Democratic side. What does that mean to you, the party, and the country?

I think it’s so exciting. America needs to see what leadership looks like for women. You can define American female leaders in many, many ways. And they get to meet four or five women candidates running on their conviction, their compassion, on what they want to fix, what they want to change. I think that’s good for the world. It’s good for boys and girls to see women can be great leaders and aspire to solve big problems.

I think Hillary did a huge service to the world. She got 65 million cracks in that glass ceiling. She inspired people all across the globe to not give up. It matters.

There’s a video bouncing around Twitter today of a group of MAGA-hat high schoolers surrounding and harassing a group of Native Americans at a rally in D.C. [She hadn’t seen it yet and watched the full video on my phone.]

This is the division and sowing the seeds of hatred and intolerance and bigotry that infuriates me. The fact that these children have taken a cue from our president and are participating in a hateful act of protest is disturbing.

I would remind all those children that our job is to love one another, to treat others the way we want to be treated. 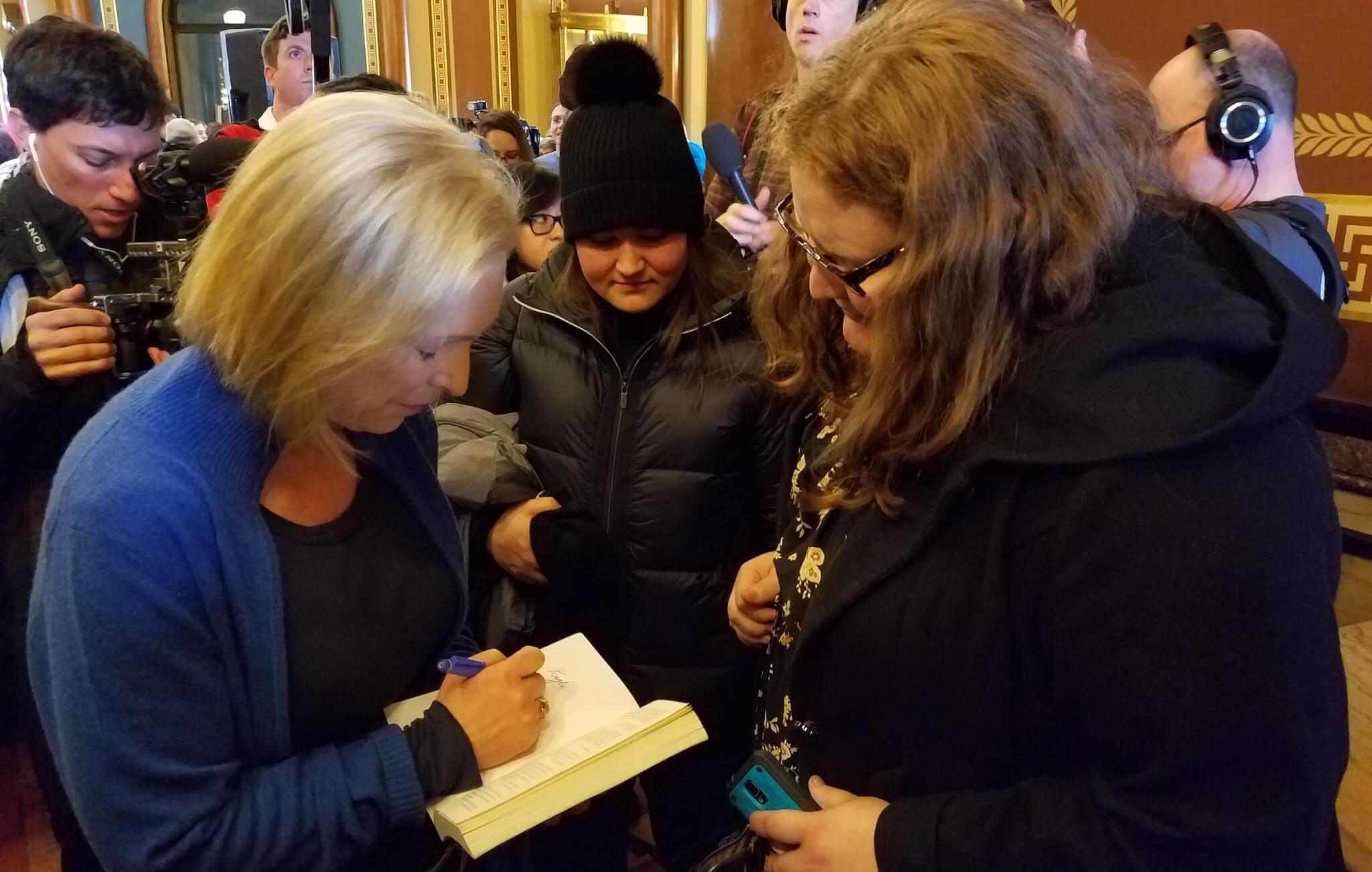 You won a rather conservative/Republican congressional district in New York. What about your candidacy or your message would help you win some of these states in the Upper Midwest that Trump captured in 2016?

[After Hillary Clinton lost] I wanted to go talk to New Yorkers and find out what was on their minds and why they were feeling so angry or concerned … I found that a lot of people, particularly upstate, Long Island, Westchester, they felt left behind. They felt like no one had been fighting for them. The fact that we lost a lot of union votes shows that regular, hard-working, working-class people feel that perhaps we haven’t been speaking out for them and their hopes and dreams for the future.

So, if you want to bring America together, it starts by listening …

I think it’s a lot about who we are and who we fight for. It’s also about inspiring people. Some people stayed home on election day … they felt like their vote didn’t matter. I think that’s changed for a lot of people since President Trump got elected. Women, in particular, are on fire. They are so upset and concerned about the direction this country is going in they’re marching …

I believe Democrats can win back America by listening, by understanding people’s real struggles, then fighting for them and inspiring them with a bigger and better vision for the future …

They want better public schools. They want their kids to have a chance in life, and that doesn’t happen if you’ve got literally crumbling public schools. Access to higher ed, access to college that doesn’t break the bank. Better job training so you can get a better job and more stable hours. Help people organize. Support unions. Paid leave. Equal pay. 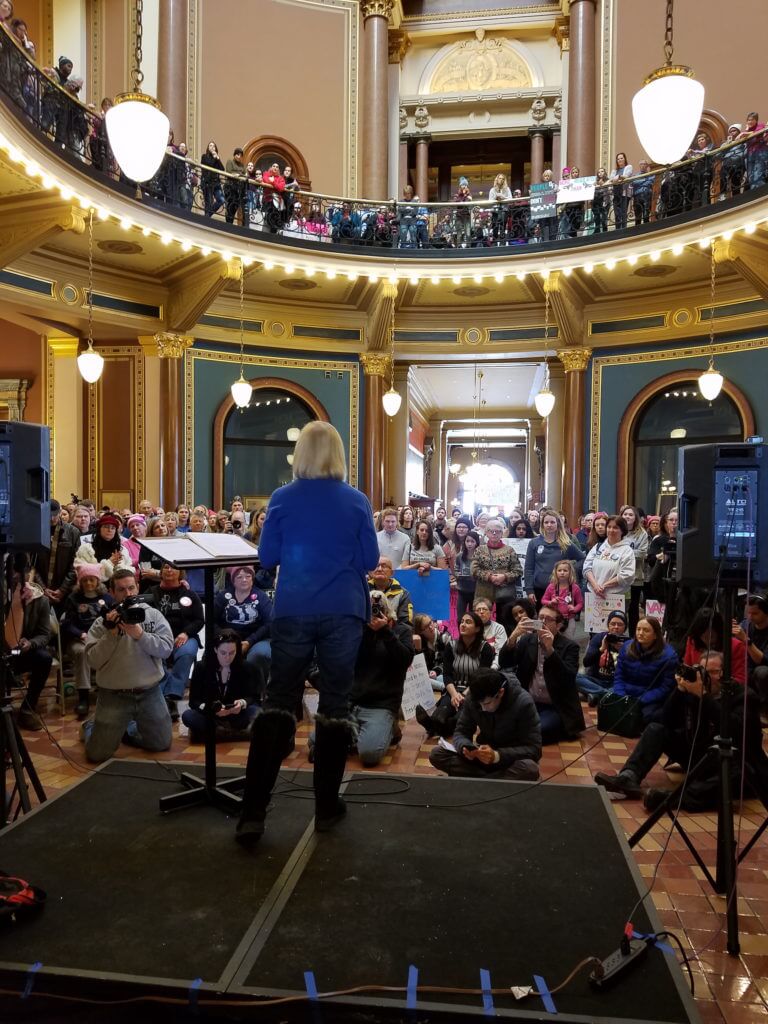 On how she ran as anti-Iraq war Democrat.

When I started campaigning, only 30% of the district was for getting out of Iraq; by election day, 70%. On some issues, you’re going to lead.

On how she also proposed a Medicare-for-All plan during her first run for Congress in 2006.

The second issue I ran on was Medicare for All. When I talked to folks in the district they were talking about how healthcare was too expensive.

If you could buy into Medicare, so you got basic healthcare at a percentage of income like 5%. And overwhelmingly, regardless of political party, people said yes. That would make me feel safer. I would know I’d get basic healthcare, everything would be covered, it was something I could afford.

When Bernie was writing his bill, I asked if I could write the 4-year transition piece because that’s what I ran on, so I did. Anybody can buy in to 4% of income. That’s the way to drive competition …

I run on whatever the solution is because it’s common-sense regardless of what label you’re going to give it, even in a red place. And I think you can take that to red and purple places in the country. 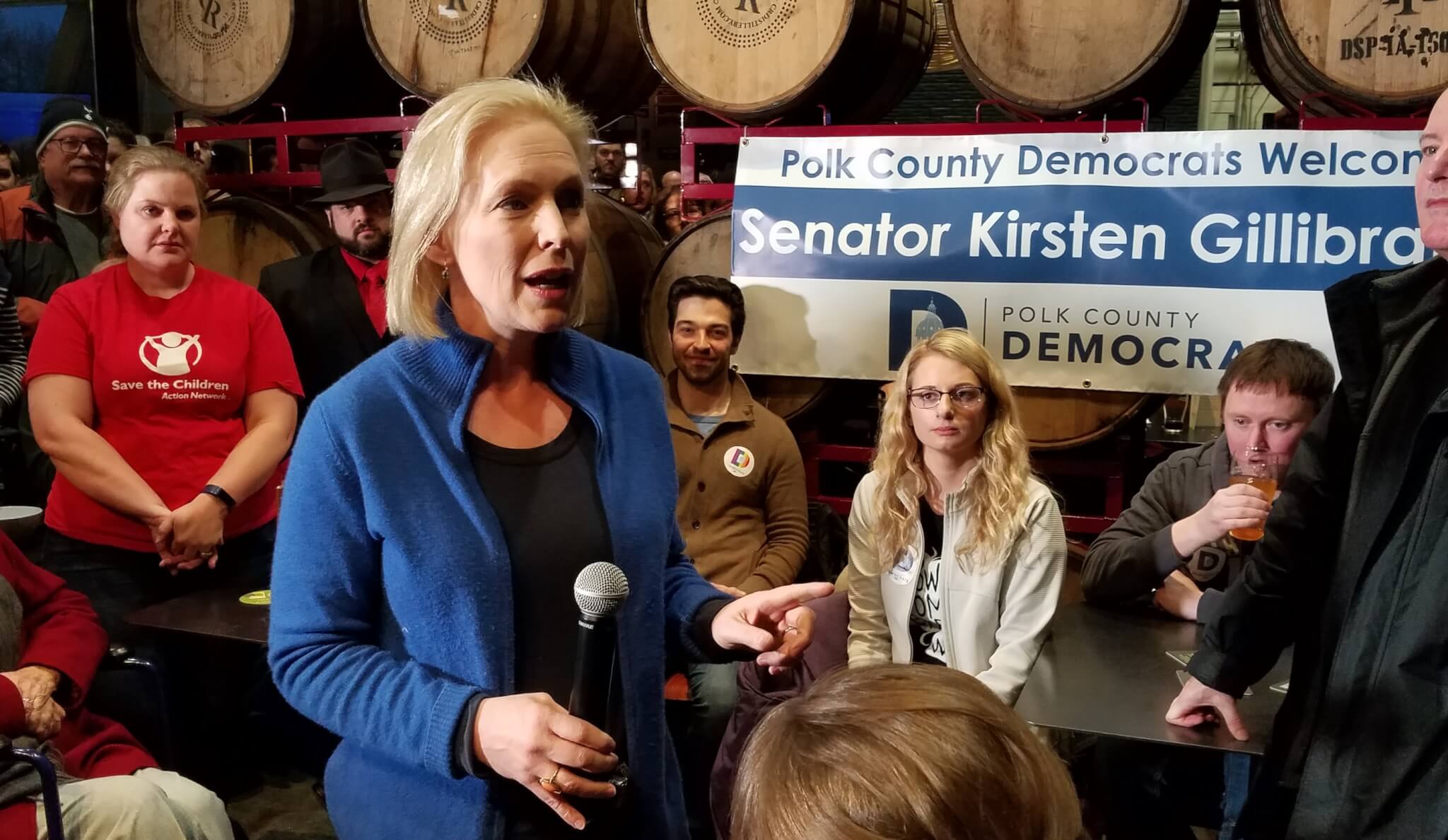 On her goal to get big money out of politics.

That’s why we’re starting the campaign by banning corporate PAC money. Not taking federal lobbyist money. That’s why I don’t think people should have Super PACs. We want to give less power to the moneyed and powerful interests, give more of it back to the people.

Gillibrand has formed an exploratory committee for a presidential run. Her visit to the lead-off caucus state was her first (she didn’t come out during the 2018 cycle), and she had to cancel her Eastern Iowa swing on Sunday due to bad weather, though she’ll be back often this year. You can watch part of her speech at her event in Ames here.