Democratic candidate Kayla Koether has won an important first step in the legal battle to get 33 absentee ballots counted in the House District 55 race, an election where she trails Republican Representative Michael Bergan by nine votes after last week’s recount.

This morning a judge ordered the Winneshiek County Auditor to take the ballots in question to the Waterloo Post Office to have their barcodes scanned. The 33 ballots arrived at the auditor’s office after the election with no postmark, and Auditor Ben Steines refused to count them. The Secretary of State’s office backed up that decision.

However, an intelligent mail barcode printed by the post office on the ballots could be scanned in order to determine which day they arrived in the mail system. Considering mail from Decorah gets routed through Waterloo, which takes about two days, the fact that 29 of the absentee ballots arrived at the auditor’s office the day after the election makes it likely they were sent before Election Day (ballots must be sent the day before the election to count).

What the judge didn’t do was issue an injunction into this morning’s certification of the election results by the Secretary of State, nor did he insist that any ballots that are found to have been sent before Election Day be counted. This move simply ensures that the Winneshiek County Auditor runs the absentee ballots through the post office’s scanning system to try to determine when they were received. The timing on that is important, though, as the post office reuses their barcode system every 30 to 45 days, meaning the ballots’ information could be lost if too much time passes.

The Secretary of State certified the state’s election results this morning, including the HD 55 race, but there are still other legal measures that Democrats can take to contest an election after certification. That process could get rather complicated, which Starting Line will explain in a later post. If the barcode scanning proves that enough ballots to change the outcome of the race were mailed on time, that should bolster any further arguments of whether they should end up being counted.

Koether and the Democratic Party have pointed to a part of the Iowa Code that allows for an “intelligent mail barcode” to be used in addition to postmarks to determine the date a ballot was sent. Reporting on this subject has been mixed, and the real issue at stake is rather complicated.

The Iowa Code does very clearly state that an “intelligent mail barcode traced to a date of entry into the federal mail system” can be used:

However, there is disagreement over what exactly that barcode is, which is why the ballots were not initially counted.

In 2016, HF 2273 successfully added the new language on intelligent mail barcodes into the Iowa Code. It was a solution to the postmark problem (post offices were increasingly not printing them on mail) pushed by Woodbury County Auditor Pat Gill. It allowed auditors to rent and use intelligent mail barcodes, which they would print on their ballots that they sent out to voters. They could then easily track through a free report with the post office when those ballots actually entered the mail. The barcode itself doesn’t actually include any dates; the post office keeps a record of when all the specific barcoded-mail goes through their system.

Gill had these printed on their ballots like so (the lines underneath the address): 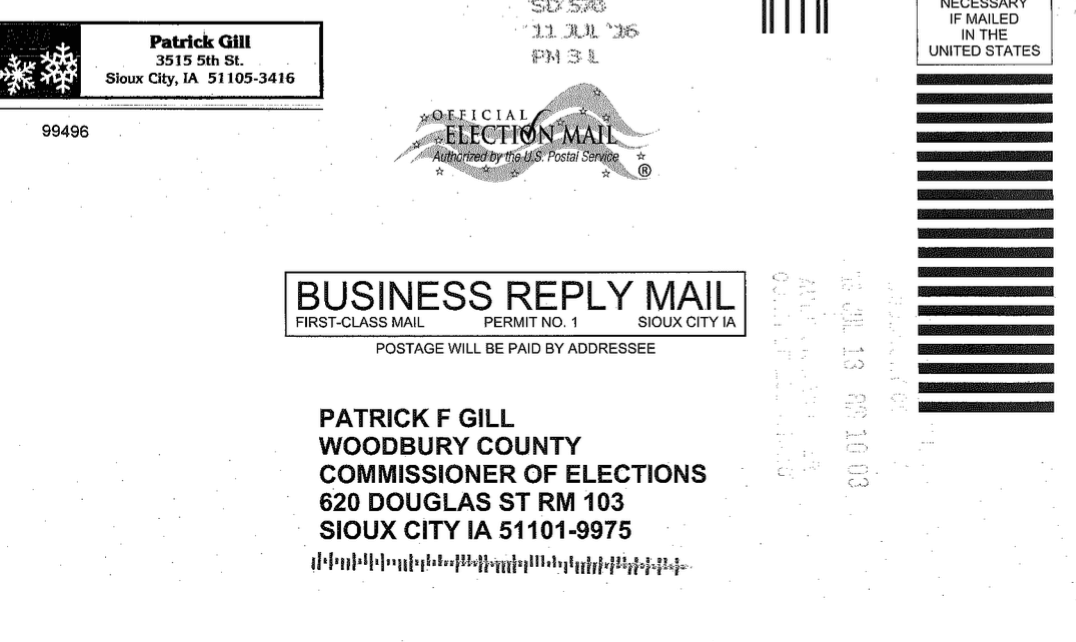 Each barcode was unique to a ballot, which then allowed him to run reports like this to see exactly what date and time it entered the post office:

Gill told Starting Line that the process worked quite well this year, and his county was able to legally count many more ballots that came in after Election Day than they were in the past.

The Secretary of State’s office also put out specific explanations for the process: 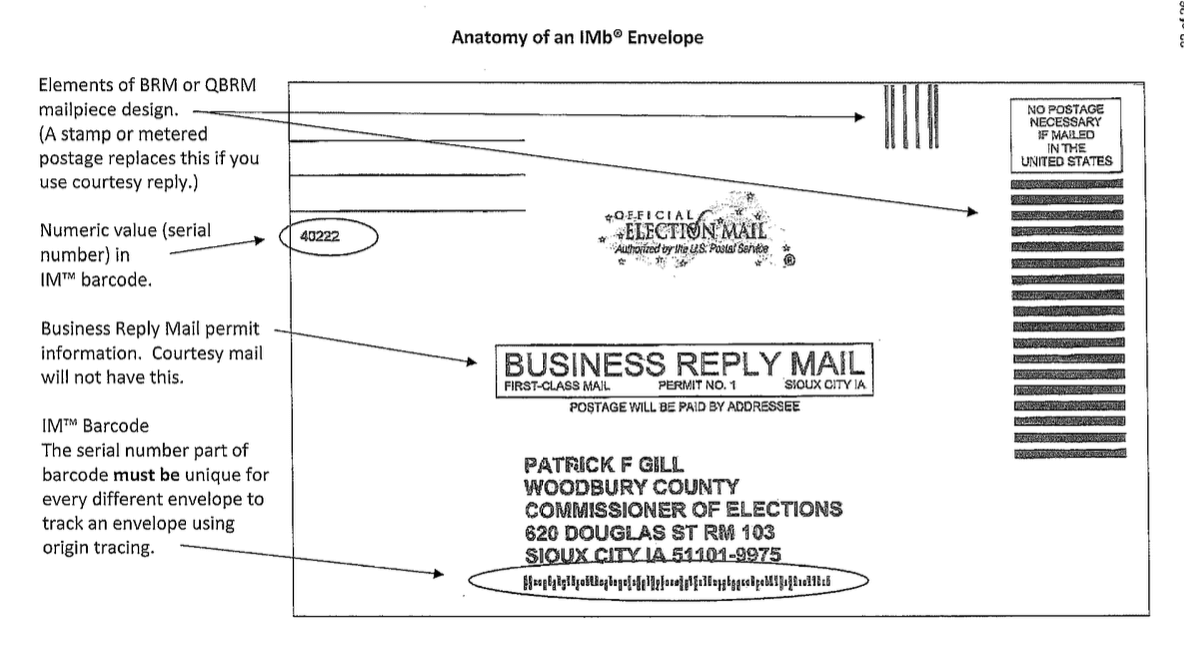 But here’s the problem: when the new code language was passed, there was a debate over whether auditors using these barcodes should be mandatory or voluntary. It was eventually decided it should be voluntary. While counties like Woodbury utilized this, ones like Winneshiek did not.

That’s where the current impasse comes from. There is a barcode on the absentee ballots in Winneshiek County, it’s just not a barcode that the auditor placed on them. Instead, they’re barcodes that the post office routinely places on mail, which also has the ability to be tracked by date.

This is a scan of one of the absentee ballots that arrived after the election date in Winneshiek that is used in Democrats’ court filing: 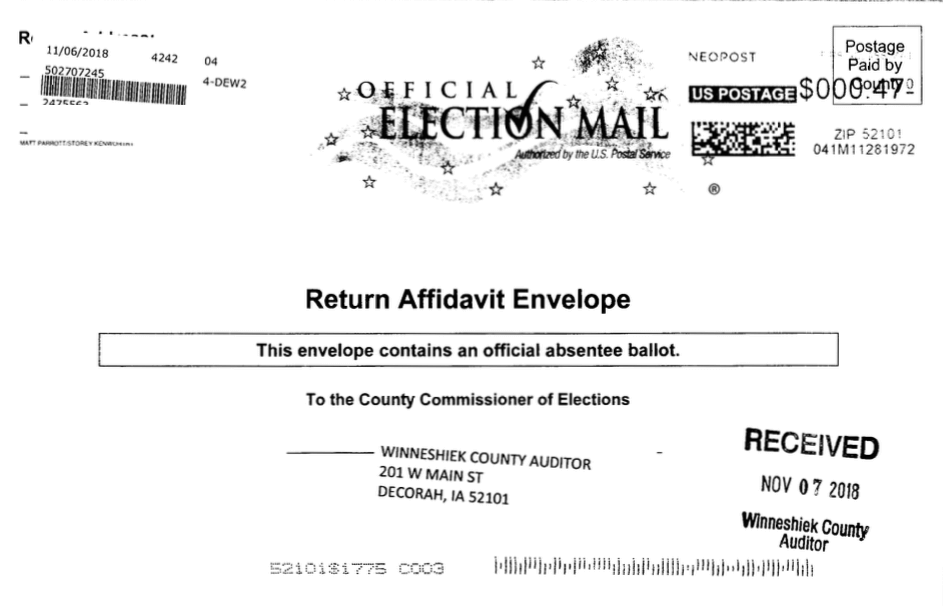 However, adding to even more confusion in this case is that this black-and-white scan apparently doesn’t show a different barcode that is a light-orange color, which is apparently the one that would be used (even though that one in the bottom-right looks like it – Starting Line has been told by several people involved in the issue that there is actually a different one on there too).

Regardless, what Democrats are arguing in their legal case is that any barcode that can be read by the post office’s intelligent mail system to determine a date should be used to get a ballot received in time counted. They point out that the Iowa Code never specifically defines what the “intelligent mail barcode” is. So, even though the Secretary of State may believe that it should only count when an auditor pre-prints the barcodes, Democrats counter that the code doesn’t limit it just to that.

Democrats are also pointing to the inconsistent counting of absentee ballots in the race. In Fayette County, a Republican-leaning county, about a dozen absentee ballots with no postmark that came in after the election were included in the final vote total during an audit. The Secretary of State’s office says that was a mistake, but that there’s no way to remove votes from a total after they’ve been added.

Another court hearing will be held later to determine whether the late-arriving absentee ballots should actually get counted based on the Iowa Code if their barcodes show they were sent on time. Should that be successful, Democrats will still have to challenge the election outright now that the Secretary of State has certified the results. But the case against counting the absentee ballots will certainly get more complicated if this new legal victory for Koether proves the ballots were mailed before the election.