Several Iowa Republicans are facing a serious ethics investigation after a participant in their self-described “hit piece” against Representative Scott Ourth ratted them out to the Iowa Ethics Board. The case revolves around Republican candidate Rebel Snodgrass, his volunteers and former Democratic Representative Dan Kelley’s involvement in a slanderous mailer sent to households in Warren County.

Late this week, the Iowa Ethics and Campaign Disclosure Board gave its director, Megan Tooker, subpoena power to launch a full investigation into the actions of Kelley and Snodgrass’ campaign. At issue is who and which committee actually paid for the anti-Ourth mailer.

A request for investigation from Tooker lays out the full details of the situation.

Around October 12, a letter was sent to people throughout House District 26, where Snodgrass was challenging Ourth for a second election cycle in a row. The letter, supposedly written by Kelley, made a series of vicious accusations against Ourth. It suggested that Ourth was responsible for the suicide of the chief of staff for a congressman that Ourth briefly worked for in the late 1980s because of a story that revealed the staffer’s homosexuality.

Actual news stories from that time tell a much different story, one in which the chief of staff was exposed by multiple staffers for repeatedly sexually harassing his staff and firing ones who refused his requests to join him in inappropriate and compromising situations. Fallout from the event actually led to better protections for congressional staffers.

The letter’s return address listed Kelley’s home in Newton, and the mailer said it was “paid for by Dan Kelley for State Representative.” Kelley was a Democratic state representative from Newton, serving a few terms before getting soundly defeated in a primary in 2016. His increasingly bizarre behavior back in his district contributed in large part to his defeat. Kelley began volunteering for Republican campaigns this past election cycle.

As Tooker explained, this expenditure would be an illegal use of campaign funds, as candidate committees’ funds can only be used on races in their own district. The letter included the sentence, “I urge you to vote for the Republican in this race.” It also would mean that Kelley wouldn’t have to disclose the contribution until 2019, his next required filing date as a non-active candidate.

But as it turned out, the funds may not have really been routed through Kelley’s old campaign account at all. Instead, a campaign staffer for Snodgrass admitted to Tooker that the funds came straight from Snodgrass himself.

“An anonymous person told me Peyton Parker, a campaign staffer for Mr. Rebel Snodgrass, was seen at two post offices in District 26 mailing mass copies of the letter,” Tooker wrote. “I talked to Mr. Parker and he acknowledged his involvement in the letter. He told me Mr. John Thompson, a Snodgrass campaign volunteer, had the idea to do a ‘hit piece’ on Representative Ourth.”

John Thompson has had his own long, colorful career in Republican Party politics. He lost his seat on the State Central Committee in part due to the distractions, and was involved in an ethics complaint earlier this year that involved Snodgrass and Thompson’s brother, Phil Thompson, who won a separate race for state representative this year (it was later dismissed).

Parker said that Thompson wrote the letter himself and then printed the letter at Thompson’s own Spirit of 76 printing company, of which both Thompson and Snodgrass are co-owners. Parker then picked up the letters and took them to Snodgrass’ office, where Snodgrass handed Parker $2,400 in cash to cover the mailing expenses. Snodgrass gave him a little more money later to finish the mailing.

Snodgrass himself has become relatively well-known in Central Iowa for his “unique” campaigns (and for his continued electoral defeats).

The entire operation seemed to be separate from Kelley, whose name and committee was apparently used simply to cover the financial tracks and make it appear that the “hit piece” didn’t come from Snodgrass. Parker informed Tooker that Snodgrass gave him a check for all the other official mailings that were done with the campaign; this was the only time he was paid in cash.

The letter created quite a stir when it began hitting mailboxes. Starting Line received many emails and messages from HD 26 residents informing us of the letter. Tooker must have as well, as she called Kelley shortly afterward to inform him that such a mailing from one committee into a different district was illegal.

“You were very evasive with me and refused to tell me where you got the money,” Tooker wrote Kelley in an email after the call on October 17. “You told me four things that all cannot be true: 1. You don’t have any money in your campaign account. 2. You have not raised any money for your campaign account this year. 3. You acted alone in sending this letter. 4. You didn’t use your own money. The only reasonable explanation is that you are attempting to misuse your dormant campaign committee to conceal or at least delay disclosing who was involved and where you got your money.”

“I am very frustrated with your lack of candor,” she added.

Kelley responded to Tooker’s questions with a long letter that probably put him in more legal jeopardy. In it, he tried to explain the real reason for the letter.

“My intent was to fight back at folks associated with the IDP who have continued an intimidation campaign against me while showing that I am willing to fight back at Democrats now that I have changed parties,” Kelley wrote in a letter dated October 19. “I wanted to establish that I am loyal to the Republican Party. This mailing will support me in a future campaign as a Republican.”

Kelley added that he told an unnamed Republican friend that he wanted to strike back at various Democrats by writing letters about their “corruption.”

“My friend told me that he would specifically pay for mailings to attack Democrats to establish a reputation for me as a Republican candidate,” Kelley wrote.

Tooker also advised Kelley that making any expenses in other districts would have to be done with a PAC, not a candidate committee. She also noted that he couldn’t start up a PAC in his name so long as he still had an active candidate committee set up.

Several days after Tooker and Kelley’s interaction, a new PAC was registered with the Ethics Board. It was called Dan PAC USA.

That move should only get Kelley in further trouble, as his defense for using his candidate committee in the initial letter was that its purpose was to benefit himself personally. Creating a PAC to get around those rules about helping out candidates in other districts seems like admitting that the real purpose was to help Snodgrass, who allegedly personally paid for the mailer.

There’s other issues for Snodgrass. Tooker wrote that Parker, the campaign staffer, had been paid by the campaign with a corporate check from Rebel’s Custom Designs, Inc., the company that Snodgrass runs. That’s another illegal financial action, as corporate entities can’t make in-kind contributions like that to a committee.

The Ethics Board gave Tooker the power to launch a full investigation with subpoena power, so Snodgrass, Kelley and Thompson’s legal problems may be just beginning. This is certainly not the first time this small group of peculiar Republican activists’ antics have made news (Starting Line has kept a close eye on them for a while), but it may be the most consequential.

One thing to watch as it goes forward is whether Representative-elect Phil Thompson gets ensnared into the debacle. He appears to have become friends with Kelley during this campaign cycle, and got help from Kelley on his own campaign: 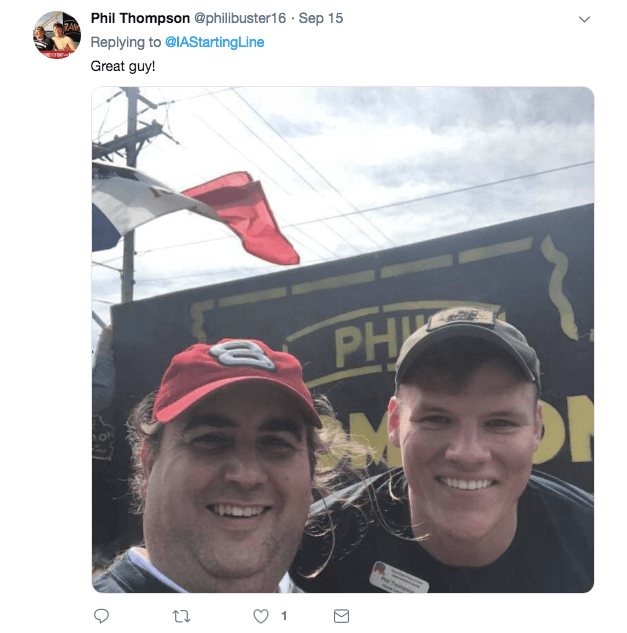 Phil Thompson has long been involved with his brother and Snodgrass’ capers. He already found himself involved in a previous ethics complaint with Snodgrass and the Iowa Firearms Coalition earlier this year. It was interesting to see someone with his background win the Republican primary to replace Chip Baltimore in House District 47, which he won in a narrow victory in the general election.

While the Snodgrass/Thompson/Kelley group will be facing more legal scrutiny after this year’s election, one of them will be serving in the Iowa House come January.