Thousands of Iowans are casting their ballots every single day as we enter the final 20 days of the campaign. Democrats started out with a big lead, but it’s recently narrowed to what the party has typically seen in the past.

Looking back at the 2014 midterm early vote numbers is still comparing apples and oranges due to Republicans reducing this year’s early vote window by ten days. Iowans simply haven’t had as many days to vote early and the parties pushed back their absentee request mailers.

However, we’re far enough into the early vote cycle that we can at least try to compare, just take it all with a grain of salt. You can view my spreadsheet data in Google Docs here or download the excel file here.

So, Democrats are doing slightly better than Republicans versus their 2014 totals, but both lag behind, most likely due to the reduced early vote days. Also, at this point in 2014, Democrats led Republican ballot requests by 15,277. Right now in 2018, Democrats lead by 19,117.

What is more interesting is comparing what’s happening in all the individual counties. There we can see which parts of the state are more or less motivated to turn out to vote in 2018.

We’ll look at those as opposed to just raw totals. Because here’s the top ten counties based on raw number of absentee requests for Democrats. It’s basically just the most-populated counties:

Here’s the top ten counties for percentage of registered Democrats requesting a ballot:

And here’s a fun map to visualize it all. The dark blue counties are the ten best, the light blue the next 10 best. Red are the worst 10 for percentage of registered Democrats requested and the salmon-colored counties round out the bottom 20. 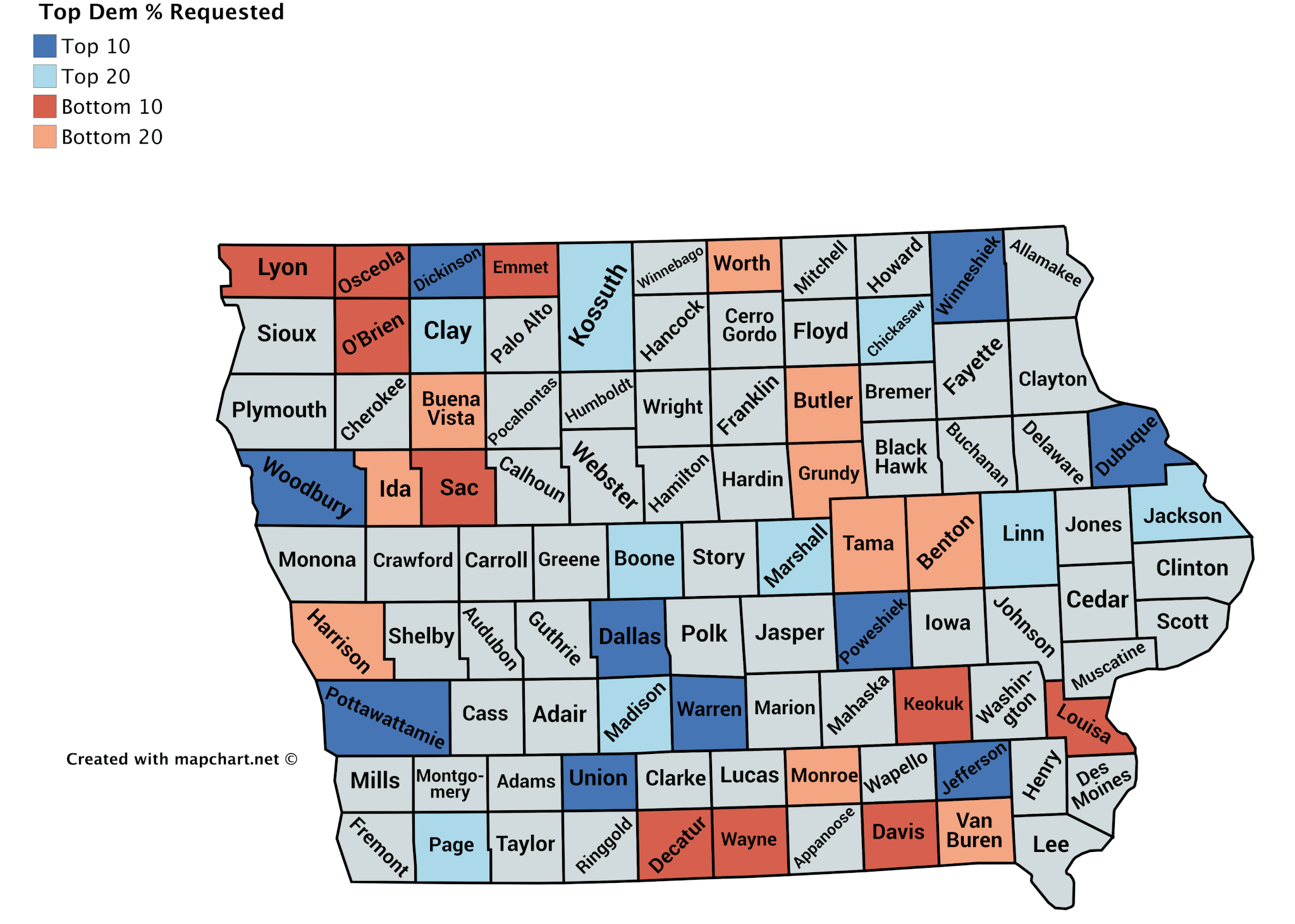 A few things stand out here. The Central Iowa counties around Des Moines have a high percentage of Democrats looking at early voting. Field efforts look to be going well in the two main Western Iowa counties of Woodbury and Pottawattamie. Meanwhile, those rural counties in the area between Cedar Falls and Marshalltown are lagging, and Southern and Northwest Iowa have some of the worst percentages.

However, this doesn’t tell the full story. Some counties in Iowa just historically have a high (or low) percentage of early voters. Other counties, especially some rural ones, have voters who just prefer to go out to the polls on Election Day.

So, to try and find specific enthusiasm, it can be interesting to compare the current number of absentee requests to the final number of early voters in 2014. For example, Winneshiek County is the 7th best in the state for the rate of registered Democrats wanting to early vote. But they often are. They’ve developed a tradition of voting early up there. But when you compare it to how many Democrats voted early in 2014, they’re at 71% of that total, which is the 37th best in the state.

Meanwhile, Mills County in Southwest Iowa is at 118% of their Democratic 2014 early vote number, meaning there is literally more people who have already requested to vote early in 2018 than actually voted early in total in 2014. As in, there are 448 registered Democrats in Mills County requesting a ballot now; 379 registered Democrats voted early there four years ago. That would suggest that Democrats’ final turnout numbers will be better than they were in 2014.

Here’s the top ten counties for current requests versus their final 2014 early vote:

And here’s the map: 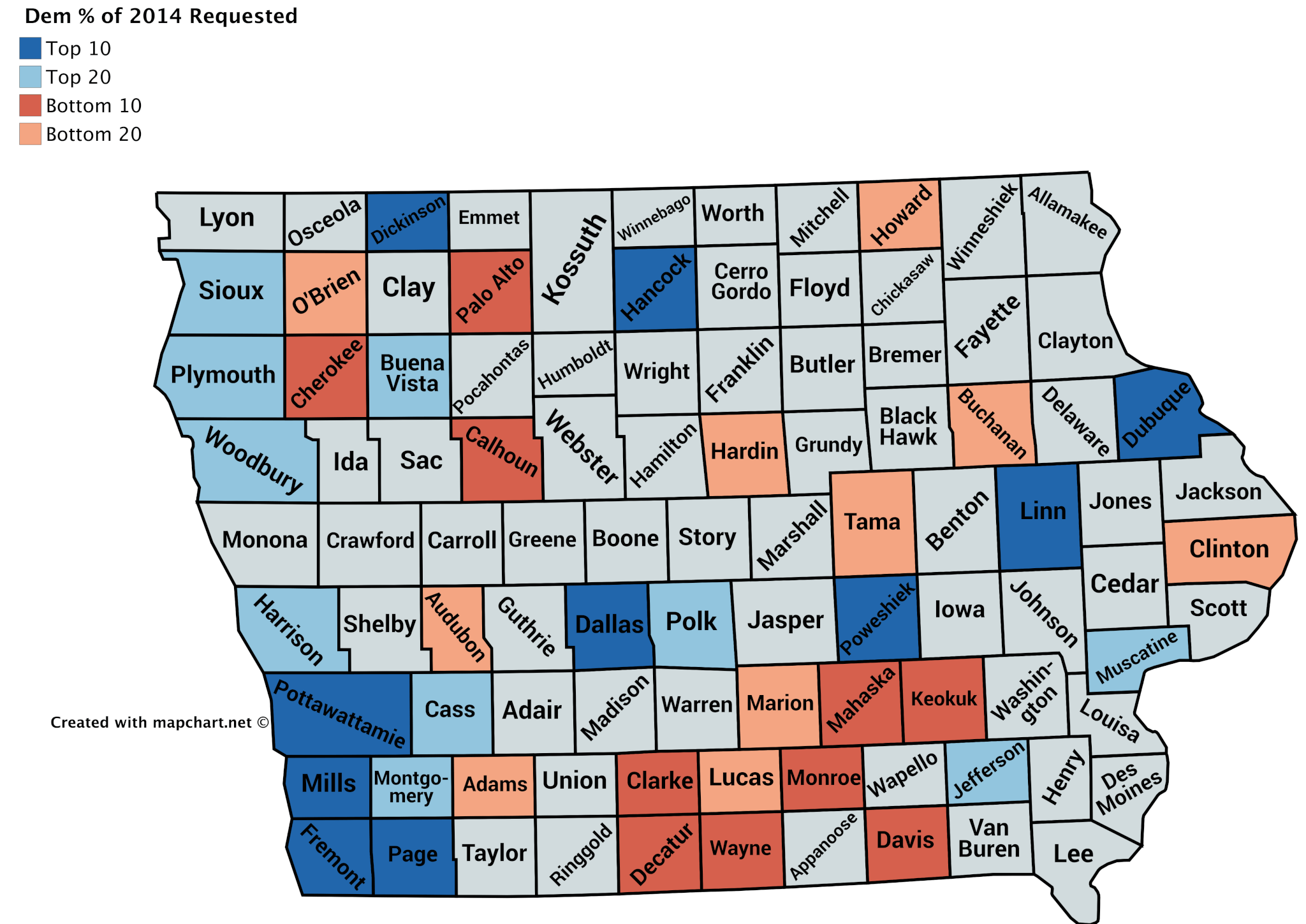 Here we start to see some very clear trends. For one, Southwest Iowa Democrats are much more eager to vote early this year than they were four years ago. That’s good news for Cindy Axne in her 3rd District race; these numbers could help keep her margins competitive in her rural counties.

However, what’s more impressive is that there aren’t many big local races out there that are driving this. You have Charlie McConkey’s race in Council Bluffs, but all of Pottawattamie County is over-performing this year. That tells me that Democrats’ field operation in Southwest Iowa is really strong.

Meanwhile, South Central Iowa is doing very poorly on both the percentage of registered Democrats voting early and their comparison to 2014. Fortunately, there aren’t too many targeted races down there. Mary Stewart has her SD 41 race, but at least Jefferson County is doing exceptionally well, while Davis and Van Buren are falling behind. Some of the Northwest Iowa corner isn’t doing great, either.

The good news for Democrats’ statewide chances is that several large counties, including Dubuque and Linn, are headed toward great early vote turnout numbers. They lead both in their percentage of registered Democrats and the pace on their 2014 totals. That’s helpful for Abby Finkenauer’s chances, but also for targeted legislative candidates like Nancy Fett, Eric Gjerde, Molly Donahue and Tod Bowman.

Another county that stands out is Poweshiek. Grinnell had an exceptionally successful early vote satellite location on campus earlier this week, which helped put them into the top ten counties on both measures. Things are going similarly going well for Democrats in Dickinson County.

Dallas County is doing great on both metrics. Some of that is due to the population increase since 2014. But that doesn’t account for all the massive momentum that Democrats are seeing in Des Moines’ western suburbs. And either way, it all means that Democrats will gain a lot more votes in this county than four years ago, which is key both for Axne and House Democrats with Kenan Judge. Their requests already being at 115% of their final 2014 early vote total should be frightening to Republicans.

And looking at the comparison to 2014 numbers also helps give some context to places like Buena Vista County. They’re in the bottom 20 for percentage of registered Democrats planning to vote early, but they’re doing better than past years. That’s still important. A couple counties may lag others that are traditional big early voters, but if they’re improving over their past numbers, that’s still a positive sign for Democrats.

Overall, what’s encouraging for Democrats is that their best-preforming counties are decently spread out around the state. Were it only the urban centers that were doing well, you’d worry that the urban/rural partisan divide might hurt the party in a still-rural state.

Instead, Democrats are seeing positive signs in urban, blue-collar and rural counties. There’s good enthusiasm in Western Iowa, while the party should be able to rack up big new totals in Dubuque, Linn and Dallas counties. Western Iowa may not build up Democrats’ statewide margins too much, but it’s interesting that 14 of Democrats’ top 20 counties for early vote improvement over 2014 are west of I-35.

The only really concerning area is South Central Iowa, but at least there aren’t many targeted legislative races down there.

Now to the Republicans. Here’s their top ten counties for percentage of registered Republicans requesting an absentee ballot:

And the map for their best and worst 20 counties in terms of percentage of Republicans requesting ballots. I’m using brown and light brown colors for the worst counties: 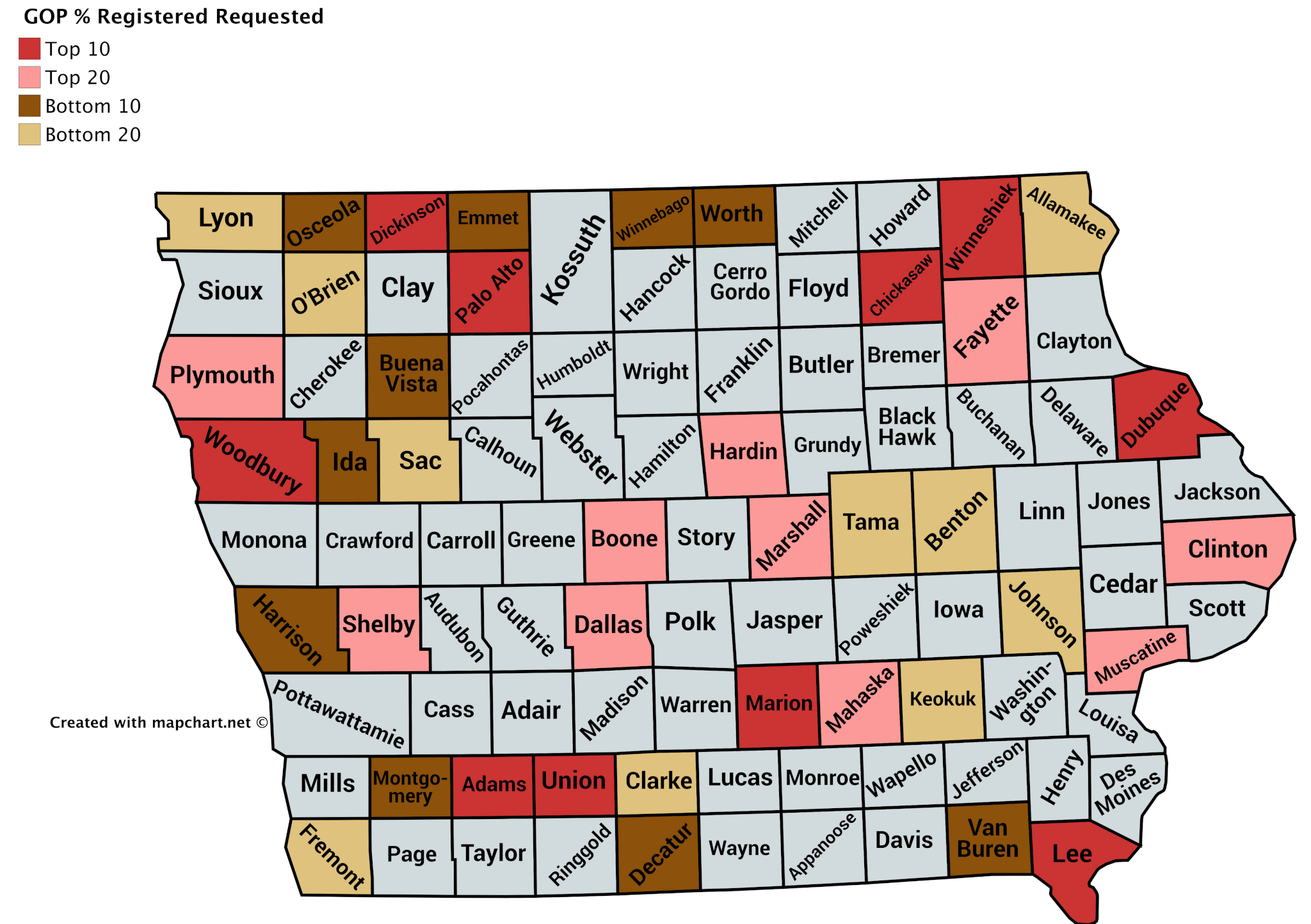 And, just like the Democrats, these numbers only explain so much. Here’s the best counties for Republicans when you compare it to how many Republicans voted early in 2014: 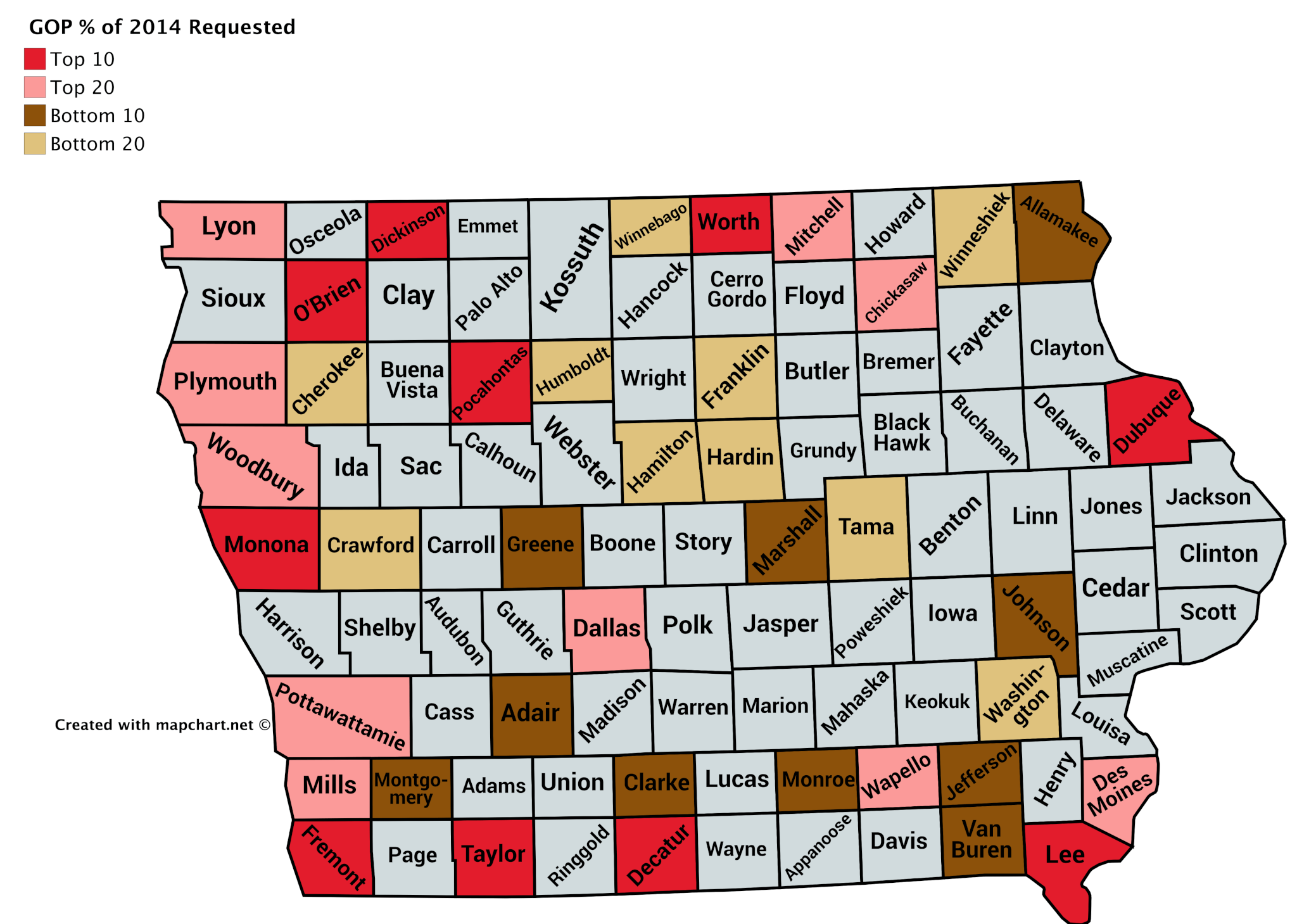 The trends aren’t quite as clear for Republicans as they were for Democrats. There are some counties along the southern tier in the state that are doing quite poorly, and some that are among the best.

Western Iowa Republicans also seem to be requesting absentee ballots at a faster pace than they were in 2014. Again, this is where this specific comparison helps. Northwest Iowa Republicans traditionally like to go to the polls, so that’s why most of the counties up there are in the bottom 20 for percentage of their registered voters. However, they’re still doing better than they were four years ago, so Republicans in the Northwest quarter of the state are choosing to vote early more now.

Dubuque County is also doing exceptionally well for Republicans on both measures. That county is simply turning out for everyone this year, it seems. That should help Rod Blum some in his reelection effort. Woodbury County is doing well, too.

Dallas County looks good compared to their 2014 numbers, but Democrats’ percentages look much better. Democrats are at 115% of their 2014 early vote number in Dallas County, while Republicans are at 73%. So, population increases seem to be helping both parties, but in a disproportionate way in favor of Democrats.

There’s a handful of concerning areas for Republicans, especially in some spots that have targeted legislative districts. Johnson and Washington counties lagging behind aren’t great for their effort to defeat Kevin Kinney. Jefferson and Van Buren aren’t good, though Wapello is doing well, which is helpful for Mariannette Miller-Meeks. Republicans probably want to boost their numbers in Allamakee and Winneshiek for their local legislative races there.

By and large, it seems the most noteworthy thing here is that the Republican base in Western Iowa is choosing to vote early this year more than it did in the past.

Starting Line will keep an eye on the early vote numbers and probably do one or two more posts on the topic before the election.