If Democrats learned anything from the past decade, it’s that holding the presidency while losing statehouses, governor’s mansions and Congress greatly limits your ability to accomplish anything. So, it’s been a delicate balance for 2020 hopefuls as they visit early states like Iowa. You want to introduce and promote yourself, while still helping out the candidates running in tough races this year.

As one of just two declared Democratic candidates for president, Congressman John Delaney of Maryland has been in an unique position as he’s traveled Iowa. He doesn’t need to be coy about his intentions of why he’s in the lead-off caucus state so often (17 times since 2016). But Delaney, who’s had a decent-sized campaign team working in the state for months, has also directed his resources to boost Democrats’ down-ballot candidates around the state.

On the financial front, Delaney, his wife and his campaign have contributed together over $250,000 to Iowa candidates and groups, including Fred Hubbell and all the statewide offices. He also endorsed a group of 22 Iowa House Democrats back in August, which came with contributions to each. 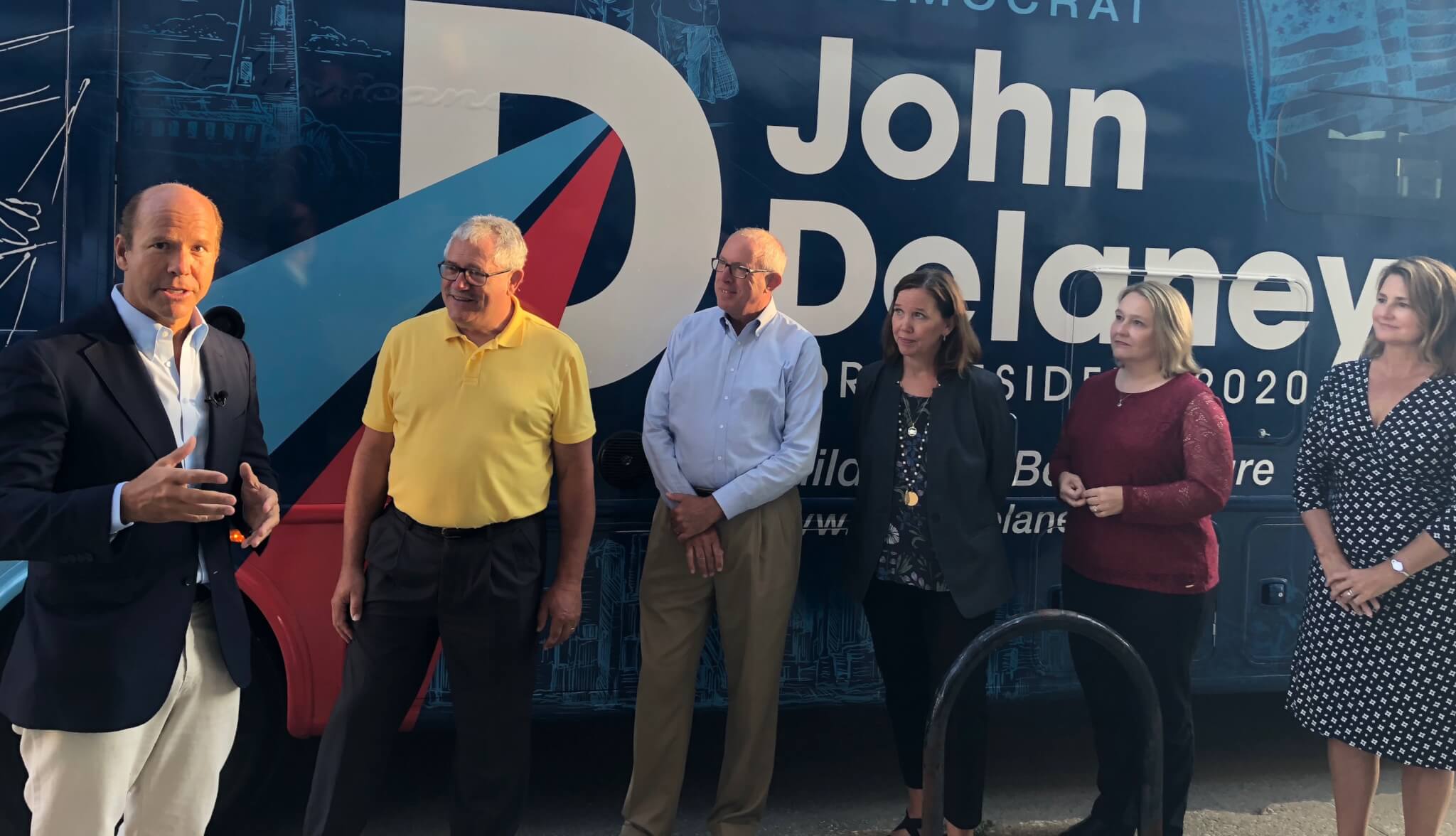 In recent weeks, Delaney has hit the pavement himself with several legislative candidates, going door-to-door in important swing districts to help turn out the vote.

But perhaps most importantly, his field team has redirected their focus over the past month to fully assisting with local Democratic candidates and county parties. The campaign has six full-time field staffers in five different counties.

Kelsey Myers, a Delaney regional field organizer working out of Cedar Rapids, has been lending a hand any way she can to local Democrats. When she first came out to Iowa for Delaney’s campaign in June, about half of her work revolved around planning and advance work for the candidate’s visits during his 99 county tour. A lot of the field operation’s work went into building surprisingly large turnouts for Delaney in even the state’s smallest and most rural counties.

Delaney finished up his tour in August, however, and now Myers’ entire focus is on helping out top-targeted candidates like Eric Gjerde, Molly Donahue and Christian Andrews. She told Starting Line she spends most days at the Iowa Democratic Party’s main field office in Cedar Rapids, checking in with each campaign to see how she can help.

“We’re a little bit less focused on entirely quantitative goals right now, so we can be flexible and help with projects that don’t have typical statistics associated with them but that the candidate really needs someone to do,” Myers said.

She’s become a bit of a jack-of-all-trades organizer in that respect, from driving out to rural counties to teach a county chair how to use the VAN database to finding and organizing data for the Linn County Democrats. Aside from that, it’s a lot of your usual door-knocking, phone banking and help with fundraising events.

“She’s doing a lot of jobs that take a lot of time that we haven’t had a chance to get around to,” explained Gjerde, who is running against Ashley Hinson in the Cedar Rapids suburbs. “What I appreciate from the Delaney campaign is that they haven’t lost sight in that 2018 is our number one priority right now. If we can’t get 2018 to turn out the way we need it to for the state of Iowa, we’re going to have a lot more issues than who’s going to be the next presidential nominee.”

Myers is like many young campaign staffers who will fill out an Iowa Caucus campaign. Raised in Minnesota, she made her way to Delaney’s operation through a college alumni connection. But she’ll enter next year with a wealth of relationships with local Democratic activists and leaders, some of whom she might help get elected to office. That can make a big difference in which campaign recruits the best precinct captains and volunteers for caucus night.

Still, Myers notes that what they’re able to accomplish in this election cycle is just as important for the future 2020 contest.

“This midterm for me is a real referendum on the situation in Congress and the White House. It can be a strong message that can’t be ignored,” Myers said. “Showing that the country doesn’t agree with many of the policies being pushed by the White House and Congress shows support for whoever is chosen as the 2020 candidate.”

Flipping some Iowa congressional seats, the Iowa House and the governor’s mansion would send a strong signal that the party can compete again in the Midwest states that Trump won in 2016. And it would certainly put Democrats here in a much better mood as they enter the 2020 cycle and start getting courted in full by their party’s White House hopefuls.

“State and local elections have a profound impact on Iowans’ day-to-day lives. That’s why our field staff has committed time and effort to down-ballot candidates all across the state and will provide an extra lift as they cross the finish line,” explained Delaney Iowa communications director Monica Biddix. “For the past two years, Iowa Republicans have used their majority rule to shut Democrats out of the conversation and institute hyper-partisan policies that are out of line with most Iowans. John Delaney knows that is not how good government should operate, which is why our campaign will continue to offer on the ground support to help elect Iowa Democrats through November.”

That 2020 race will kick off in full almost immediately after the November 6 election, with many Democrats possibly announcing their candidacies before the year is out. Some will start off that effort by being able to point to real Democratic victories in Iowa that they played a role in. And it’s likely local Democratic activists here will remember that.