Boone County Democratic activists didn’t know they were hosting a major event with Cory Booker until late this past Saturday. About 36 hours later, over 200 cheering people gave the New Jersey senator a hero’s welcome at a Monday mid-day rally in the small town of 12,000.

When Booker entered the county party’s headquarters to an amped-up audience that was literally packed to the rafters, it felt like a real “moment.” Booker had gotten a lift to the event on congressional candidate J.D. Scholten’s “Sioux City Sue” RV. About a dozen people waited out on the sidewalk, peering down the street for the first glimpse of their approach. Some watched the livestream that Booker was recording of the drive on Instagram. At one point, a bald eagle flew by them. 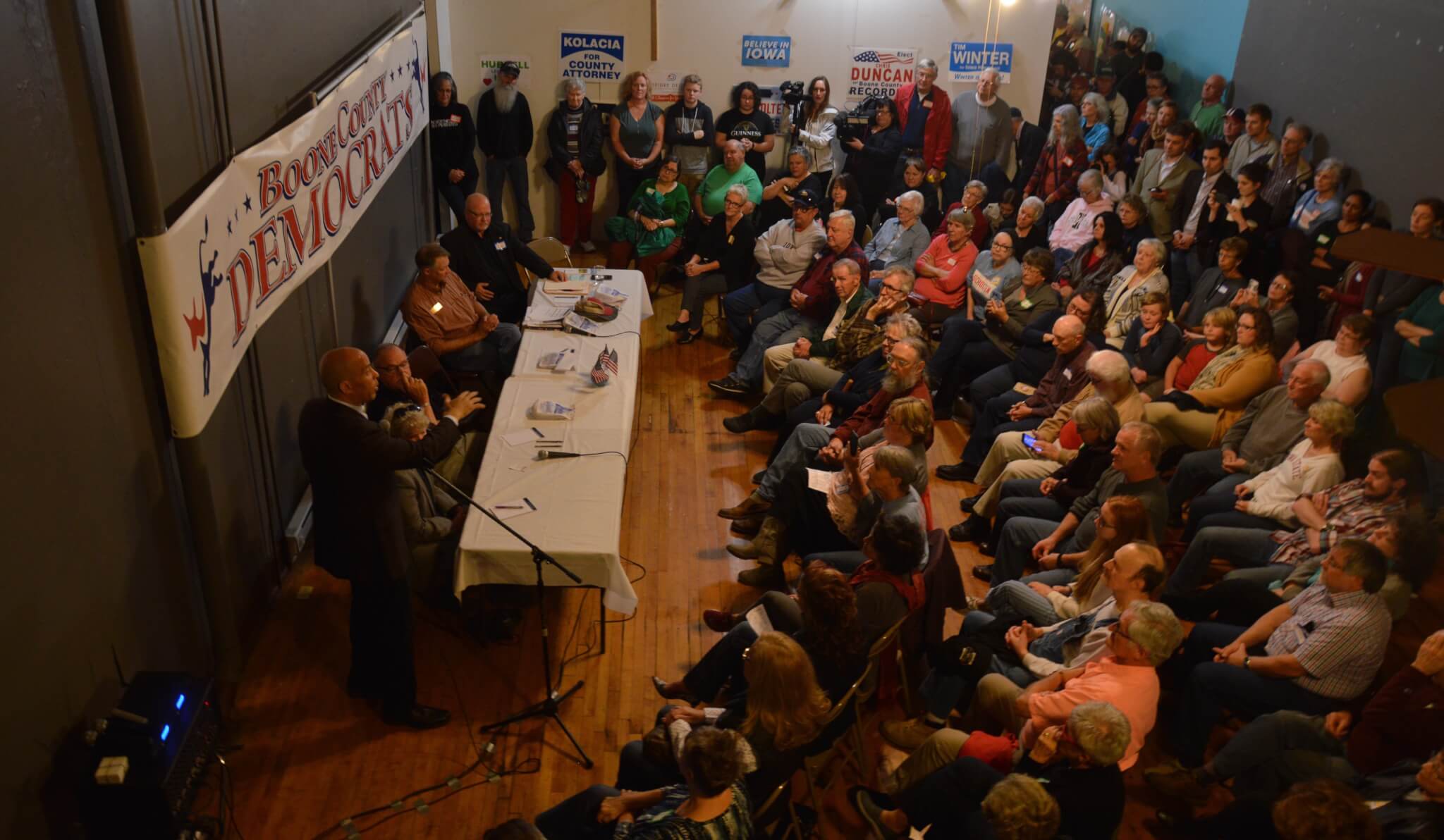 The crowd of Democrats, many of whom who were still seething over that weekend’s Kavanaugh vote, looked like what you’d see a week out from a presidential caucus. The event was billed as a farm forum, and Booker did talk some about his proposed legislation on corporate agriculture mergers. But it mostly was an introduction of Booker’s persona and national message, one that the audience reacted to very positively.

For all the talk in Iowa about Democrats being solely focused on 2018, they certainly don’t seem to mind giving some thought to their potential 2020 candidates, as Booker’s rock star-like entrance showed:

Booker’s four-day Iowa trip, his first during the 2018 cycle, marked the first visit from a so-called “top tier” candidate this year (well, if you discount Bernie Sanders’ much earlier visits). It was supposed to be longer, but the Kavanaugh trip shaved two days off his plans.

While Iowa has seen a swarm of White House hopefuls come through the lead-off caucus state, the national media has taken note that none of the likely front-runners (like Joe Biden, Kamala Harris or Elizabeth Warren) have graced the Hawkeye State with their presence yet.

As I’ve written and commented often, that seemed like a too-cautious approach based in the conventional wisdom of yesteryears. In the age of Donald Trump, and especially in advance of a primary where 20 or more Democrats might run, building up every little advantage you can ahead of time in Iowa is crucial. Relying on high name ID to buoy you with a later entrance seems risky.

The overwhelming response that Booker found on his Iowa journey demonstrated just what everyone else was missing out on. Democrats in the state will remember who came out to help them during their extremely crucial 2018 races. And Booker’s stops were serious boosts to local candidates. Other national Democrats have stumped in Iowa, though most came to pre-built events. Booker turned out crowds that the party hasn’t seen too often this past year. Imagine the enthusiasm boost if Booker, Harris, Warren and Biden were criss-crossing the state for Fred Hubbell, Cindy Axne and Abby Finkenauer in the final weeks of the campaign. 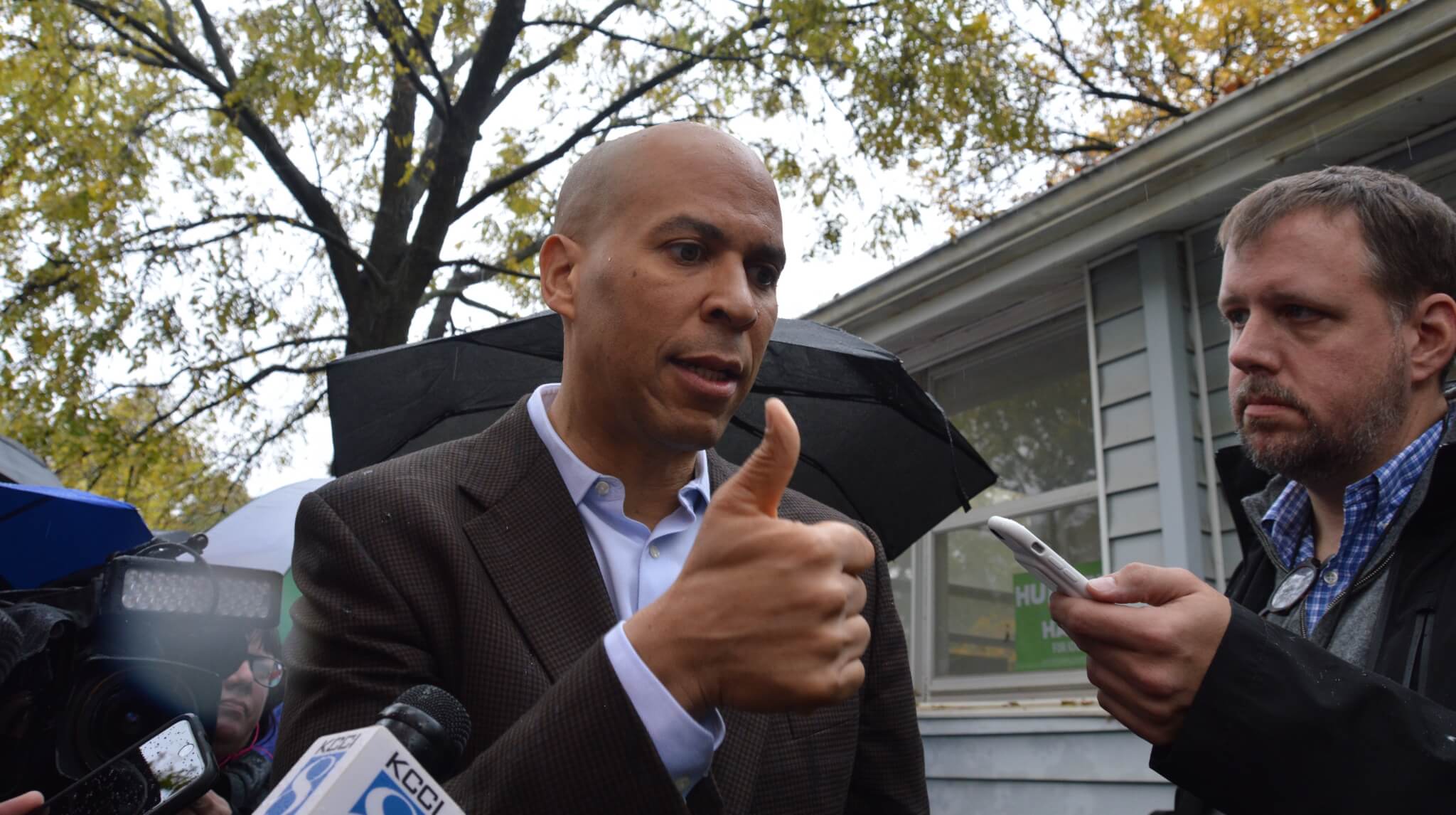 And Booker’s visit does seem to be prompting others to plan trips. The Atlantic reported (and Starting Line has heard the same) that Harris is scheduling an Iowa outing. Starting Line also hears talk of Warren reaching out to Iowa campaigns. And Bernie Sanders has a two-day visit planned to help out J.D. Scholten in the coming weeks.

It all also shows the foresight of Democrats like John Delaney, Eric Swalwell, Tim Ryan and Jeff Merkley, all of whom have made many journeys out to Iowa this past cycle. If they’re going to compete with the excitement factor around people like Booker, they need to put in serious legwork to build up early connections with activists and grow their name ID. Lesser-known Democrats who drop in to the race next Spring can’t possibly stand out in such a large field.

Finally, an overlooked part of the early 2020 race is the fight for experienced and talented Iowa staff. There’s only so many operatives and consultants to go around, and early visits allow for small meetings with potential hires. It’s also helpful to those staffers to see whether the candidate is the real deal in person. Most already had confidence in Booker’s campaigning abilities and overall appeal, but it’s just nice and reassuring to see it play out in front of actual Iowans. 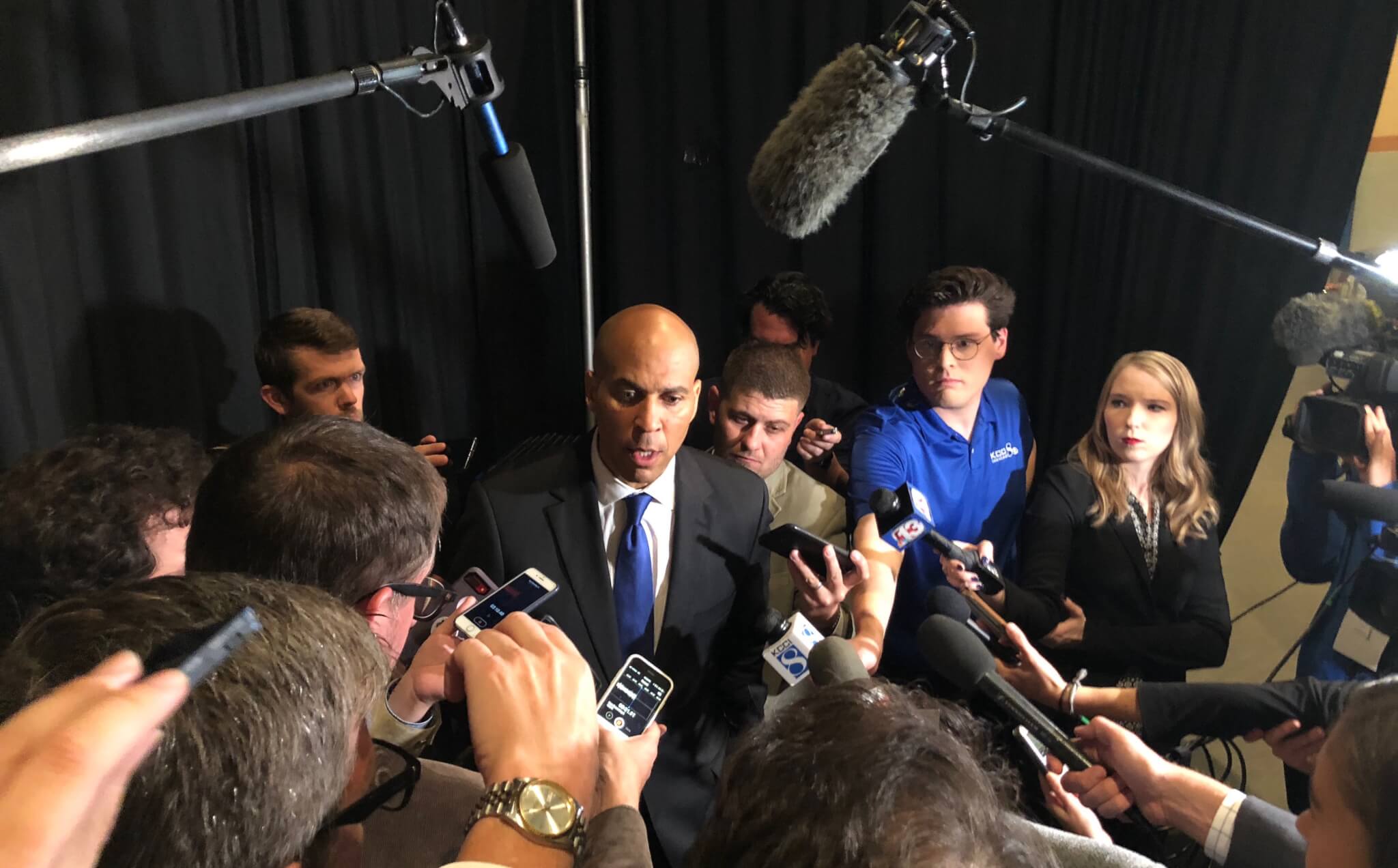 Aside from his public events, Booker also held numerous private meetings with key activists, his own extended family members in Iowa and elected officials. He had dinner one evening at the home of Des Moines City Councilman Josh Mandelbaum, a key influencer in Polk County. And he’s had Jerry Crawford, one of Hillary Clinton’s top Iowa backers, help introduce him around.

Booker isn’t the only one to have a breakout moment in the pre-caucus year. Michael Avenatti lit up a crowd in Clear Lake with his Wing Ding Dinner speech, showing Iowans and the national press that he was serious about 2020 and could come off as a very legitimate candidate. Tom Steyer held several well-attended events with his Need To Impeach/Need To Vote organization, tapping a certain nerve in the party by drawing out a group of rank-and-file Democrats that don’t usually attend political events.

And the aforementioned frequent Iowa visitors like Delaney and Swalwell have used this past year to prepare themselves well through a workman-like approach of extensive travel.

But Booker’s visit was something different entirely, and previewed just how competitive and exciting the 2020 caucus process will be. We may see far larger crowds and greater interest way earlier than even during the 2008 contest. Booker probably secured himself one of the (very) early frontrunner spots in that process. Now we wait to see how the top contenders will respond.