A private poll was commissioned last month on likely Iowa Caucus-goers’ early thoughts on the 2020 race, and the results give us some fascinating clues as to where each White House contender may start off in the lead-off caucus state. Starting Line got a look at it today.

The David Binder Research poll was commissioned by the Focus on Rural America organization and surveyed 500 Democrats who said they would definitely or probably attend the caucus in 2020. It ran from September 20th to the 23rd.

Vice President Joe Biden tops the list of candidates that Democrats say they most want to see run, but there’s plenty of caveats throughout the poll of whether his profile is what the party loyalists wants. For the most part, the field is wide open with few clear favorites.

Let’s start off with the basics of what the poll found. Here’s who the likely caucus-goers said they would “most like to see run for President in 2020:”

The pollster also asked who they would caucus for if it was held today. This combines both people who said they would definitely caucus and those who were leaning a candidate’s way:

Both of those results are obviously good news for the former vice president, who remains extremely popular among the Democratic Party’s base. In such a fractured field, he would start off any contest with a lead in most Iowa polls.

But horse race numbers like this aren’t that helpful this far out. Most Democrats haven’t thought much about the 2020 primary yet, and a full year of campaigning in Iowa from all the candidates will drastically change the dynamics.

What’s more interesting right now is where each possible candidate is starting out in terms of their name I.D. and favorability. On that front, we can see that many Democrats would begin a campaign in Iowa with a decently well-known name and people open to supporting them.

Several interesting things stand out here. For one, Biden’s “strong favorable” towers over everyone else, including Elizabeth Warren and Bernie Sanders, who also have high overall favorables. Sanders also only has a 12% unfavorable rating, showing that whatever remaining Clinton/Sanders divides from the last primary seem to be largely overblown.

The quartet of high-profile senators considering their first presidential run – Warren, Cory Booker, Kamala Harris and Kirsten Gillibrand – all have pretty reasonable name I.D. to begin with, Warren standing out in particular. Booker is a little better-known than Harris, both of whom were in the spotlight during the Brett Kavanaugh hearing (mostly after this poll was taken).

Maryland Congressman John Delaney, who began this year as a virtual unknown in Iowa, has nearly just as high a name I.D. as Harris and Gillibrand. Only 36% of likely caucus-goers haven’t heard of him, likely thanks to his extensive early travels in Iowa and his run of TV ads.

Attorney Michael Avenatti has used his many cable news appearances to his advantage in the early 2020 chatter. Only 36% haven’t heard of him, though he also has the highest unfavorable rating in the poll – 18%.

Former Attorney General Eric Holder is also exceptionally well-known, even though he’s largely been out of the national spotlight for a few years now.

On the other side of the ledger, this poll shows how much work some dark horse candidates have in front of them if they run. Montana Governor Steve Bullock has impressed key activists on his early trips out to Iowa this year, but 72% of likely Democratic caucus-goers don’t know who he is.

The poll didn’t include the names of several Democrats who have come to Iowa often (like Eric Swalwell, Tim Ryan, Jeff Merkley or Martin O’Malley) or who have been in the news lately (like Amy Klobuchar). That, however, will be a long-lasting problem in polling the early 2020 field. There’s simply so many possible Democratic names that you run up the expenses and complications on a poll that would include them all. One big benefit to Delaney’s extensive early campaigning here is that he gets included in these surveys at all.

The poll also queried what kinds of profiles Democrats might be looking for in their 2020 candidate. 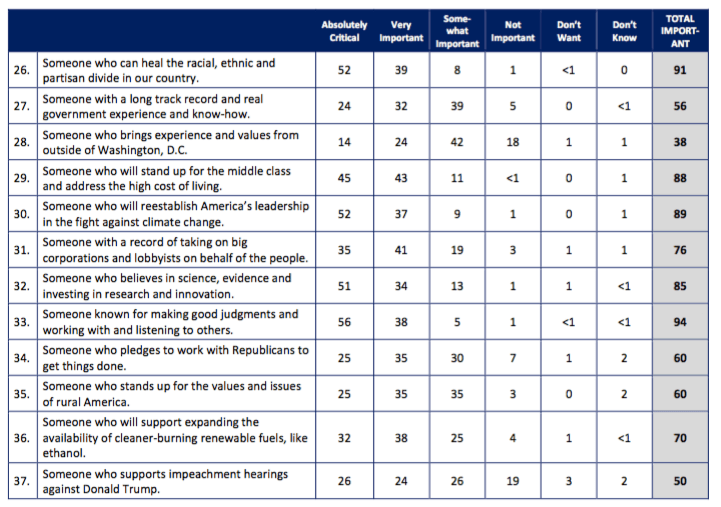 Someone who could heal the country’s many divides polled high among Democrats’ priorities. At the same time, someone who would work with Republicans didn’t get much support. One of the lowest results was for someone who would start impeachment proceedings against Trump (although if the 2020 Democratic nominee won, that wouldn’t really be an issue…).

Democrats didn’t seem to care much whether their candidate had lots of Washington D.C. experience or not. And candidates who emphasized specific issues like climate change polled well.

The poll also asked some key questions that have big implications for a candidate like Biden. 48% of likely caucus-goers said they’d prefer a “younger candidate with fresh ideas who’s not from Washington,” while 32% preferred an “older candidate who has a lifetime of experience in Washington.” That tracks with a number of Democratic primaries around the country this year where younger candidates or ones who seemed more like the outsider (either in biography or ideology) prevailed.

Democrats also seemed to be open to a more pragmatic candidate, with 61% saying they’d like a candidate who can “compromise to get things done” over the 34% who prefer someone who “sticks to their values and beliefs.”

The Focus on Rural America organization has been conducting focus groups and polling surveys in Iowa since the 2016 election, trying to find how progressive messaging can reconnect with rural voters. This poll was mostly about 2020, though they also had some questions on rural/renewable topics: 90% said they want a candidate who backs expanding renewable fuels like ethanol. Another 75% were in favor or year-round access to E-15 fuel.

You might notice in the survey that of the Democrats polled who caucused in 2016, 64% said they backed Clinton, while 33% were for Sanders. Some might wonder about that number since the two candidates nearly tied in the caucus, but early on in the poll they narrowed the respondents to just people who said they would “definitely” or “probably” participate in the 2020 caucus.

What this is likely showing us is that the broad Sanders coalition that showed up in 2016, many of whom hadn’t been engaged in politics before, aren’t that enthused about caucusing again in 2020 (not yet, anyway). We saw a similar drop-off in voters between the 2016 Iowa Caucus and the 2016 Democratic primary for Senate that was held five months later.

Essentially, what we always see is that the people who turn out for every caucus is different. Candidates create and bring out their own unique coalition of voters. That’s informative to the candidates who hope to run as Sanders’ progressive successor in 2020. You can’t just quickly pick up all the pieces of his base by backing the same policies he championed; you have to excite and motivate his former supporters to get involved again. Or, just create your own base.