The Brett Kavanaugh hearing was the talk of the afternoon among the Democratic activists who braved the rain for this weekend’s Polk County Democrats Steak Fry. Party volunteers discussed their reactions to Dr. Christine Blasey Ford and Kavanaugh’s testimony as they intermingled with the Iowa and national politicians who gathered to speak.

The Iowa candidates barely mentioned the hearing when they addressed the crowd, preferring to stick to their usual stump speeches that focused on state issues. But the four national speakers who came in – Senator Jeff Merkley, Congressman John Delaney, Congresswoman Pramila Jayapal and former Obama adviser Alyssa Mastromonaco – blasted Kavanaugh’s nomination and rallied the attendees to work even harder in the final weeks as a way to oppose Donald Trump’s pick for the Supreme Court.

“No one who has ever abused women in that fashion should ever qualify for any office or any judgeship in the United States of America,” Merkley said in his speech. “There’s a lot of other reasons Brett Kavanaugh shouldn’t be serving. He has an imperial view of the presidency. He believes the president can never be investigated. In fact, can’t be indicted. In fact, can ignore the Constitution.”

Merkley found himself in a prominent role in opposing Trump’s last nominee, Neil Gorsuch. The Oregon senator held the Senate floor for 15 hours in the days leading up to a vote on Gorsuch, carrying out a quasi-filibuster to draw more attention to the nominee’s right-wing views and to denounce Republicans’ “theft” of a Supreme Court seat with the Merrick Garland saga.

This past week, Merkley filed a lawsuit to compel the Trump Administration to release 100,000 pages of documents relating to Kavanaugh, which would in theory delay the nomination. But if all these other efforts failed, Merkley pointed to November for the next option to push back.

“The Republicans have plotted for three decades to make the court into a vision that strikes down ‘We The People’ democracy and replaces it with ‘We The Powerful’ government,” Merkley said. “To counter that, we have to have a powerful blue wave of people-power like we have never seen before. And I think this year, right now, in this state, in this moment, in this next five weeks and three days, we have the opportunity to show how it’s done.”

Congresswoman Pramila Jayapal of Seattle also spent a portion of her speech addressing the nomination and what’s it meant to the social and political fabric of the country.

“If you’re like me, these past weeks have taken us to a new low,” Jayapal said. “The horror of a Supreme Court nomination that was being jammed through in the wake of sexual assault allegations from a remarkably courageous and compelling Dr. Christine Blasey Ford. The belligerent, petulant, entitled stonewalling of a nominee who showed his true colors, and even separate from the charges against him, does not have the temperament to be on the highest court of the land.”

But she also encouraged Democrats to not get discouraged, no matter how Kavanaugh’s nomination plays out. Jayapal pointed to how two women telling Senator Jeff Flake of their sexual assaults seemed to move the senator to insist on an FBI investigation, delaying the proceedings. 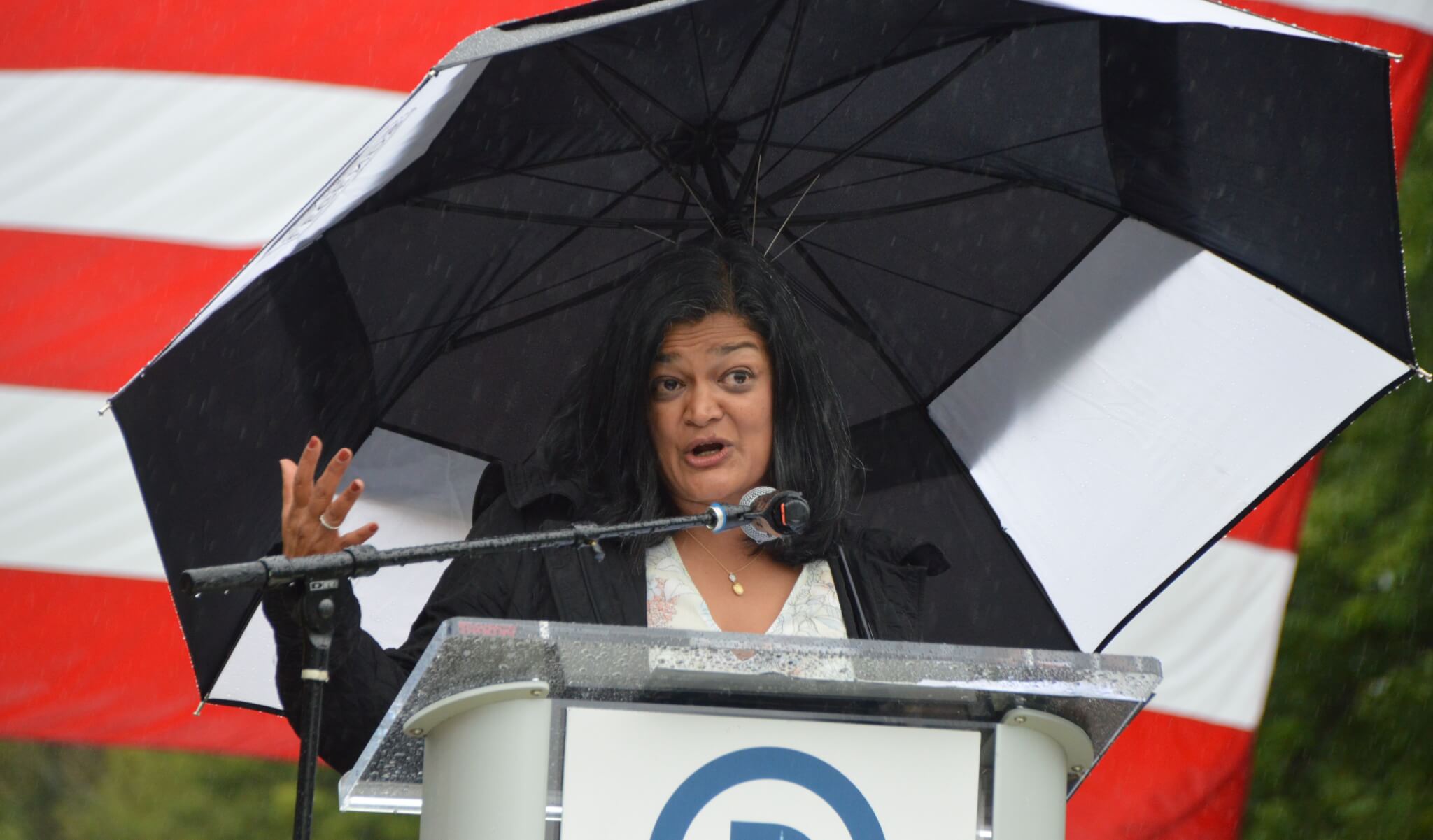 “Because of all that we have a temporary reprieve for a week,” Jayapal said. “It is a victory, and brother and sisters, we have to do everything to let that fill up our tired souls.”

One concern raised frequently among attendees and those at the podium was that Kavanaugh had essentially declared himself an enemy of Democrats at the hearing and would strike back when on the court.

“[Dr. Ford’s] bravery was met with the hysterical testimony by an unhinged man devoid of temperament required for a lifetime appointment to the most important and powerful court in the land,” Mastromonaco explained. “He shouted at senators and refused to answer simple questions, questions that could have had answered had a routine FBI investigation had been done.”

Delaney briefly touched on the Supreme Court at the start of his speech, arguing the past week’s events would be just one more motivating factor to get people out to the polls.

“In the last several weeks, the basic value of human decency when we’ve seen these courageous women step forward and tell their story,” Delaney said “In the context of a world where every 90 seconds someone is sexually assaulted. Every eight minutes, a child is sexually assaulted. 90% of them are women. To see these women have their stories doubted and the disbelief that’s gone around Washington has really been disturbing.”

The Iowa candidates largely steered away from the national conversation in their speeches, but Fred Hubbell and Rita Hart were asked by reporters about their reactions to the Kavanaugh developments.

“I think it just underscores how important sexual harassment is to the nation as a whole,” Hart, Democrats’ candidate for Lt. Governor said. “This is a truly important issue. We all need to be working as best we can here at a state level to make sure we are eliminating sexual harassment.”

Hubbell was asked about how State Senator Nate Boulton fit into all of that. Boulton withdrew from the governor’s race in May after allegations of sexual misconduct were reported on, but does not plan on leaving the Senate.

“If you’re a public official, you need to hold yourself to a higher standard,” Hubbell replied. “I think it would have been appropriate for Nate Boulton to resign from his senate seat. It’s not a Republican or Democratic issue. This is an issue for all Iowans. We need to have the same standard apply across the board for everyone. That kind of behavior is not acceptable and not tolerated, and public officials need to set that example.”