At least that’s the case for two Iowa reporters that Blum has clearly built up a hatred for after they asked him tough questions or ran investigative stories on his businesses. He lashed out at both this week, in one case creating a negative story for himself out of nothing.

The first incident wasn’t that big a deal, it just highlights how he holds grudges. On Wednesday, Blum lashed out at KCRG and their reporter, Josh Scheinblum, who inadvertently gave Blum his most embarrassing media moment last year. That was when Scheinblum pressed Blum in a TV interview over Blum’s decision to bar anyone from outside his congressional district from attending his town hall meetings. The reporter questioned if the congressman would reject donor money from outside the district, too; Blum got angry and stormed out of the interview, leading to countless mocking stories.

Blum fired back at Scheinblum after Axios put out a helpful tool that shows where congressional candidates get their fundraising from. It shows that his Democratic opponent Abby Finkenauer has a much higher percentage of national donors than his campaign. So, Blum tagged Scheinblum in a Facebook post and accused KCRG of “media bias” for not reporting on this… one day after Axios’ story went up. 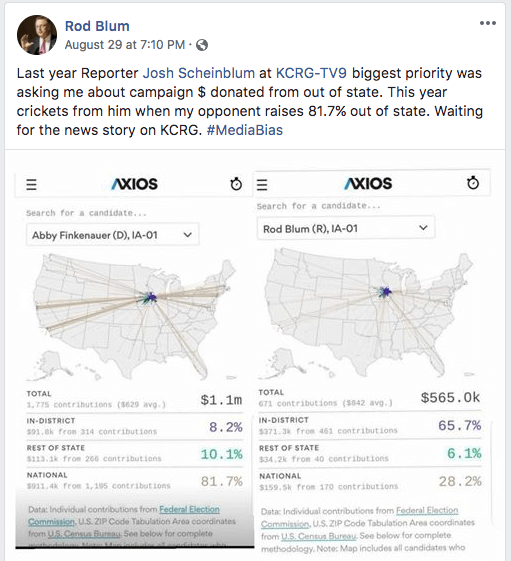 Ironically enough, it’s probably Blum’s lack of national donors that put him front and center in a different negative press story this week. Politico reported on Friday that national Republicans are considering pulling their support from underperforming members, singling out Blum as a potential chopping-block casualty. If Blum was working the phones harder, he might not be so far behind Finkenauer in fundraising from individual donors, in or outside the district.

Still, Blum has a point here. He got knocked for out-of-district donations last year, and yet his opponent has more national donors than he does.

But this brings us to the important point about Blum’s volatile personality and press outreach efforts: he’s awful at it, and it needlessly hurts him. This particular story would be a great one for his team to pitch to KCRG, maybe even offering a chance to sit down again with Blum to make his point. Instead, he publicly attacks them.

And that method was all too apparent when he went after Associated Press reporter Ryan Foley in a Twitter missive last night, blasting Foley for sending a routine email inquiring about a Facebook group of which Blum was a member. Several people accused Blum of trying to dox Foley by putting out his cell phone number in the full tweet. 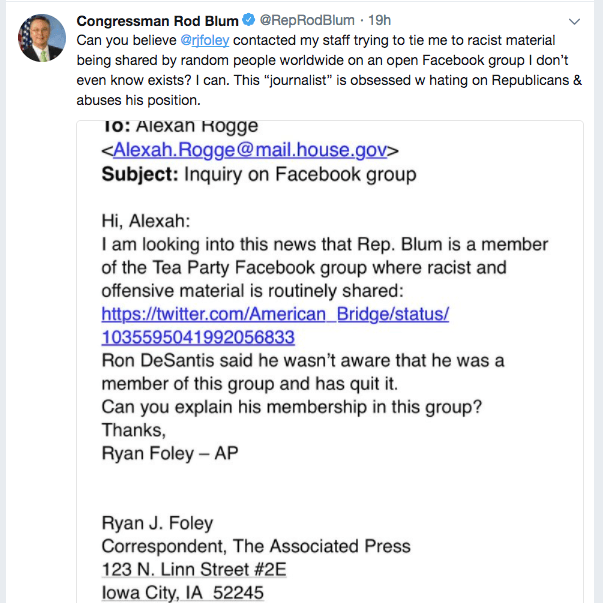 Blum hasn’t seemed to be too fond of Foley after the reporter published several stories linking Blum to running a shady internet company with ties to his chief of staff that the congressman didn’t disclose in personal financial records. Blum’s old grudge may have gotten the better of him here.

What Foley is asking about is Blum’s membership in a Facebook group simply called “Tea Party,” which shares a nonstop stream of incredibly racist and obscene political posts. The new Republican nominee for governor in Florida came under criticism from apparently being a moderator in the group.

Rather than simply responding to Foley’s question or reach out to him personally, Blum put the reporter on blast on Twitter, drawing far more attention to the issue than otherwise would have been necessary. It’s already led to several national stories on the tweet and Blum’s membership in the group. There probably would have been far more had it not been a holiday weekend.

Was any of this necessary? No.

Anyone who’s spent some time on Facebook knows that there are different and odd ways that you might get yourself added to some group or page. Depending on how your newsfeed sorts things, you might not even notice you’re part of some group if you’re not online a whole lot or you don’t interact with their content early on. The Florida Republican candidate took some heat because he appeared to be a moderator; that doesn’t seem to be the case for Blum.

And in Blum’s defense, the Tea Party Facebook page shows him being added by a Michael Tagliano in May of 2015. Tagliano’s Facebook page says he lives in Atlanta and doesn’t appear to have any connection to Blum. In fact, Tagliano’s page looks like it has all the hallmarks of a political bot account. There’s barely any personal information, no photos, no family, and it’s all just shares of right-wing memes and memberships in right-wing groups and candidate pages.

Indeed, this is more likely a scenario where Blum was being targeted, not where he willfully joined and enjoyed some wildly-racist Facebook page. So, what was so hard about having a quick conversation over the phone with a reporter about that?

There have been numerous times where I myself have had polite and frank conversations on background with staffers or candidates about a story I was thinking of writing. And there have even been times where they made a legitimate and informed case as to why a certain story wasn’t really a story, and I agreed and ended up not writing it.

That’s why building relationships with the media is important – so that you avoid needless misunderstandings and so that both sides get a better idea of the truth.

Blum, however, seems so paranoid and hostile toward the media that he ends up turning a story about nothing into one of him doxxing a reporter. That’s the kind of judgement and volatile personality that any voter should question as to whether it makes Blum an effective member of Congress.

And for those national Republican leaders wondering whether they should invest heavily in Blum’s reelection, they have to start wondering how many more self-inflicted wounds Blum will cause himself between now and November.

3 Comments on "How Not To Deal With The Press, A Rod Blum Example"