A man with a long history of bizarre, racist social media posts, including those which claimed Barack Obama was a secret Muslim, thanked Governor Kim Reynolds today for her team’s assistance in trying to get him on the ballot for Attorney General. [Update: Starting Line hears that while Republicans initially helped Anderson with signatures, around noon on Saturday the party and Reynolds pulled their support from his effort.]

West Des Moines Republican and attorney Patrick Anderson waged a last-minute effort this week to collect enough signatures to oppose Attorney General Tom Miller on the November ballot. No Republican had yet filed for the office, though there is a Libertarian running.

Anderson publicly stated he wanted to run after the news that a man who was an undocumented immigrant admitted to the abduction and murder of Mollie Tibbetts. He hoped to challenge Miller over immigration issues, arguing that Miller won’t enforce the nation’s immigration laws. He asked in one of his first Facebook posts (which seems to have since been taken down), “Are you upset about the Mollie Tibbetts murder?”

Others reported that Republican activists specifically saw a “political opening” after Tibbetts’ death. 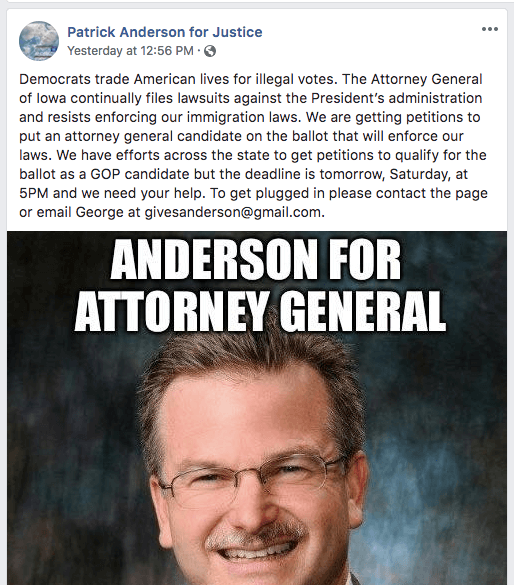 Anderson was ultimately unsuccessful in his goal, saying in a statement this evening that he fell a few hundred signatures short of the 1,500 required by the 5:00 PM Saturday deadline. But he specifically thanked Reynolds for her help, saying her team and activists that support her assisted him in collecting signatures in 25 counties in two days.

It’s certainly understandable that Republicans would want to help out someone who stepped up for a major office they didn’t have a candidate for. But Reynold has already stated that she wanted to avoid politicizing Tibbetts’ death, so giving aid to a man specifically wanting to use the Tibbetts family’s tragedy to get himself elected seems a bit peculiar. And Reynolds team may also have wanted to better vet Anderson. The man has quite the history of weird, racist and conspiracy theory-fueled social media posts.

Scrolling through the past two years of Facebook posts from Anderson shows he frequently opines on and shares incendiary stories from discreditable conspiracy theory websites and far-right click-bait pages. He voiced his belief several times that Obama was a Muslim. 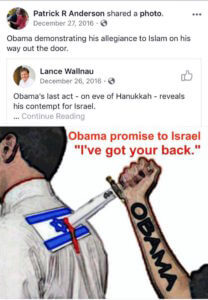 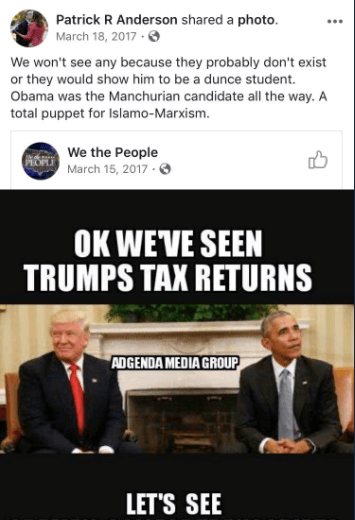 He was especially transfixed on Muslims, believing them to be nothing more than a violent political movement instead of a broader religion. 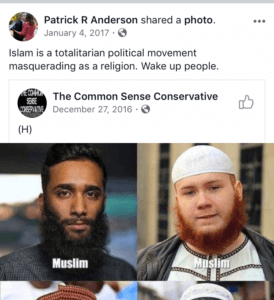 Nor did he seem to care much for LGBTQ individuals. 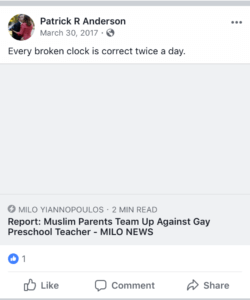 Fortunately for Anderson, however, he was not a “cuck,” as indicated by this survey he shared. 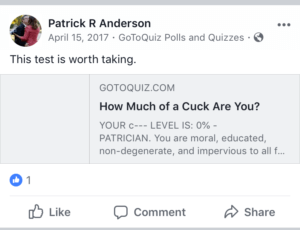 He also will not be a candidate for Attorney General this year.

The only remaining question is why on earth Kim Reynolds’ team thought it wise to help someone beset by fever-dream, far-right racism to try to get on the ballot in order to campaign on connecting Mollie Tibbett’s murder solely to immigration fears.