For an initial Iowa visit to test the presidential waters, Julian Castro hit all the usual marks last week. The former Housing and Urban Development secretary spent his three days in the lead-off caucus state meeting activists, touring the State Fair and introducing his life story and overall vision for the country.

But many of his specific stops – and the warm receptions he got at them – pointed to the strategy he may use if he does throw his hat in the 2020 ring.

At age 43, Castro is more accomplished than many of the potential White House hopefuls looking at a run against Donald Trump. He won his first campaign for a seat on the San Antonio City Council when he was 26. He became mayor of the city several years later, making him the youngest mayor of a top-50 city in the country.

His keynote speech at the 2012 Democratic convention and role as a member of Barack Obama’s cabinet gave him some national recognition, and the Hispanic community seems particularly enthusiastic about him early on.

So, it was noteworthy that many of his initial stops on his first Iowa tour seemed geared to just those strengths. He spoke at separate events with the Latino Political Network and the Asian And Latino Coalition, as well as two different events aimed at younger Democratic activists. Castro’s first stop on his Iowa tour was with a gathering of young professionals from the progressive New Leaders Council group. There he highlighted his life story of getting elected to public offices at a young age. His message at that event focused on a long-term vision for the country and educational opportunities.

“I believe as progressives, we need to focus on what opportunity means in the 21st century,” Castro said. “It used to be you could get by with a high school education. That’s not true anymore. That’s why I believe we need to make at least the first two years of college free.”

A day later, Castro spoke to another group in the same room, this time of slightly younger Iowans at a College and Young Democrats of Iowa fundraiser. There he talked about his race for a seat on the student senate at Stanford, including how he got the exact same 811 votes that his identical twin brother Joaquin received in the election.

“When we get into office, as Democrats, we need to do the reverse [of Republicans],” Castro said, encouraging Democrats to move just as fast on their priorities as the GOP did on theirs once in power. “We need to expand opportunity, to expand the number of people who have healthcare, to expand the number of people who can go to college. My challenge to you, especially those of you running for office, is to be bold. Keep pushing after you get elected.”

Attendees at the events were intrigued by what they saw.

“Hearing him talk about his journey through college, coming up from that low-income background to me is inspiring as a low-income student myself,” said Jaden Deal, a student at Norwalk High School. “Because that’s not something we tend to talk about a lot in Iowa politics.” 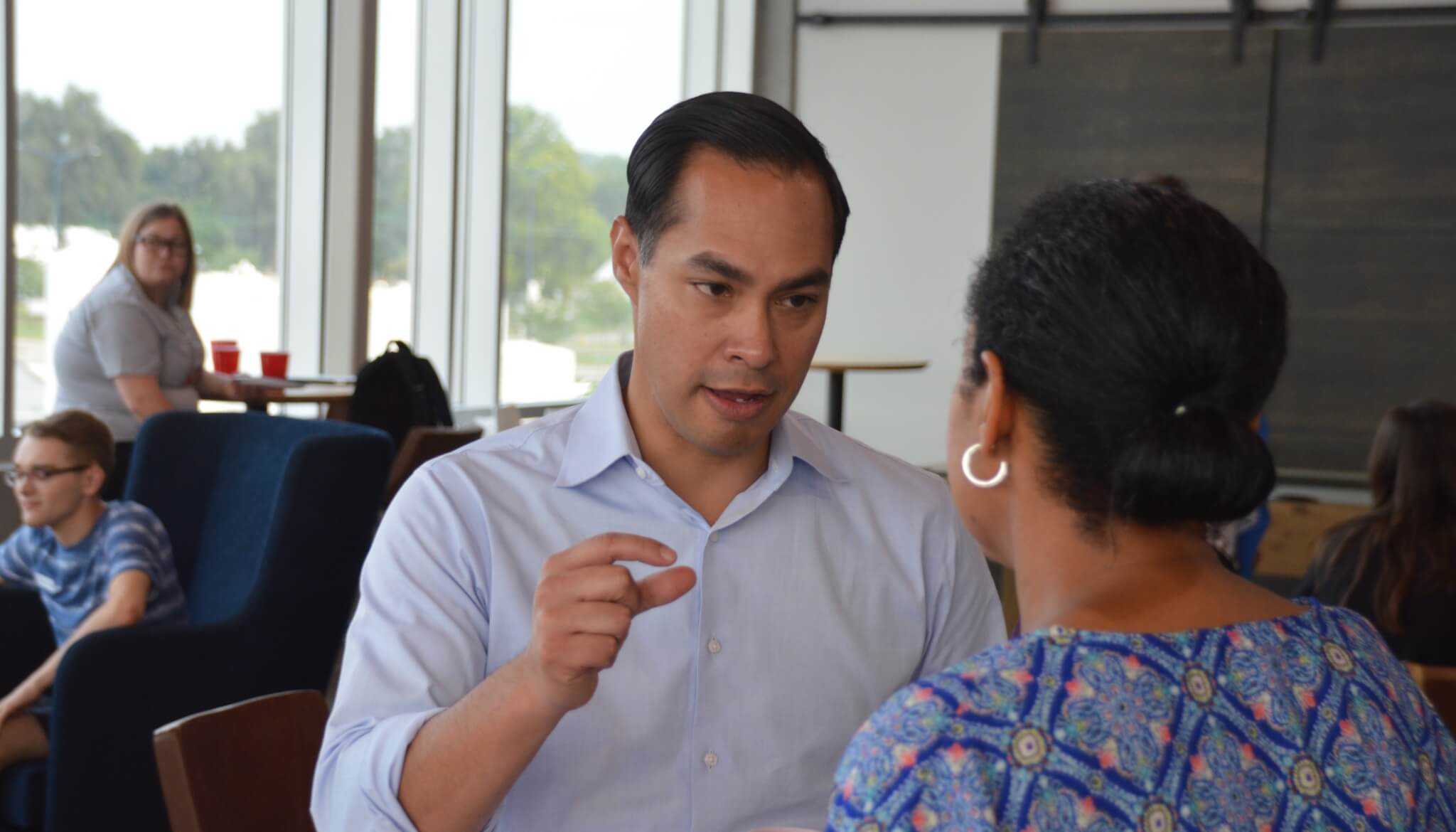 “I think it would get young people really excited because that crowd is looking for more diversity,” commented Maggie Flowers, a Simpson College student, about the possibility of having a prominent Latino run for president.

That sentiment was even more prevalent at a meeting of the Latino Political Network where Castro spoke to about 30 people in a West Des Moines Mexican restaurant. Rob Barron, the group’s leader, said he was initially surprised at just how many people already knew of Castro and were both excited about him and ready to back a presidential bid.

“He’s right at the top with anybody else. I think it’s a wide-open field,” said Barron. “He’s got great name ID, I realized that as I put this together … I like his demeanor. I think he’s real level-headed, mature. He has the energy that comes with youth, but he’s got great experience too. Overall, I look at him and I think he looks the part. He looks like he’s calm, he’s relaxed, he’s ready.”

Ila Plasencia, who has been organizing the Latino community for 60 years in Iowa, explained what Castro’s candidacy could mean.

“I think our community would be behind him,” she predicted. “I think it would bring our country together. We are a growing population. Right now, the administration wants to get rid of Latinos, regardless of what country you come from. But we’re growing and I think this would bring us together … I think the Latinos are becoming more involved. The old-timers like myself, we’ve always voted. But getting the young people involved is important.”

The problem for Castro, of course, is that young and diverse is exactly what Iowa is not. Turnout for the Iowa Caucus skews older and very white, though Obama activated a larger contingent of young people to show up in 2008.

Still, having a base of support to build off of is incredibly important in Iowa. Beginning a campaign with a core group of activists who will volunteer and reach out to other potential caucus-goers is essential. And with a field of candidates that could surpass two dozen, those kinds of inroads to early activist support means that much more. For the rest of a potential presidential run in Iowa, Castro would need to navigate all the usual ideological and personality divides within the party. While speaking at the Des Moines Register’s Soap Box stage at the State Fair, he tailored his remarks more to Social Security in front of an older crowd.

When asked about his stance on healthcare, he signaled support for Medicare-for-all, though he avoided specifics.

“I think we need to embrace Medicare-for-all,” Castro said. “There are different plans out there on how to do that, and I think I’m open to a conversation on which plan to embrace, but we need to move in that direction.”

Castro explained that he would make a decision on whether or not to run for president after the November elections and before the beginning of the next year, with an official announcement right around that timeframe. With a wide-open field and several potential contenders with more resources or higher name ID than Castro, there’s no telling how he’d fare early on. But he’s optimistic about his chances.

“There’s a lesson of Iowa over the last 40 years, it’s that the state doesn’t’ always do what people expect it to do,” Castro told reporters. “I believe that, number one, people are ready for a new generation of leadership … and secondly, they’re looking for people who are focused on the future and focused in a concrete way on what actually matters to them.”