Several minutes into Leonard Boswell’s speech this May at the Polk County Democrats Spring fundraiser, I got a bad feeling in my gut. It was wonderful to see the former congressman up on stage, clearly enjoying himself as he went on a bit past his allotted time, but it very much felt like a final swan song.

Boswell spun a few stories from his time in Congress, praised his former leader Nancy Pelosi (who he was introducing) and reflected on his path from farmer and Vietnam veteran to elected official. Unfortunately, my recorder picked up too much background noise, or I’d transcribe his last words of advice to Iowans here.

And that appearance behind the podium did end up being one of Boswell’s last, as he passed away yesterday from complications due to cancer. It’s likely his illness was connected to his exposure to Agent Orange in Vietnam.

Tributes to Boswell’s life have been pouring in online and across social media. It’s incredible the number of people he inspired, mentored and counseled throughout his career. I don’t have stories about Boswell that are as touching as others, but I do have some.

Leonard Boswell was one of the first elected officials I met when I arrived in Iowa back in 2003. I came from a district in Missouri where I was represented by Ike Skelton, chairman of the House Armed Services Committee, and I saw a lot in common between the two. Sometime after the 2004 Iowa Caucus, I started volunteering and interning for Boswell’s campaign, as did many of my closest friends from Drake University. He always went out of his way to greet and chat with all the volunteers in his office. We all lovingly referred to him simply as “The Boz.” 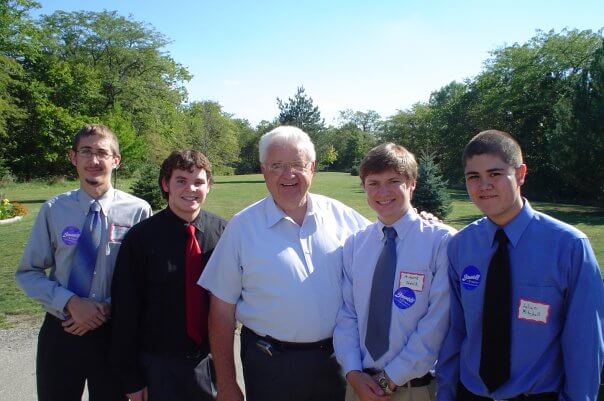 Most importantly, Boswell was always a good friend to the college students in his district. I remember that when I led the Drake Democrats, I could never get a call returned from my local state representative. But whenever we needed a speaker on campus for an event, Congressman Boswell always showed up. That meant something.

There was one particular event the Drake Democrats held in either 2005 or 2006 about college affordability. We got four students to share their unique stories about how they were struggling with tuition costs and students loans, and we thanked Boswell for his continued leadership on expanding Pell Grants.

When Boswell stepped up to the podium afterward to speak, he got so choked up by the students’ stories that he could barely make it through his prepared remarks. He thanked us all and said he was more hopeful for the future when he saw young people raise their voices and get involved in politics. He seemed genuinely moved by what should have otherwise been a routine event on his daily schedule, and we all remembered that.

Watching Boswell’s service was a good life lesson in not getting too caught up in letting larger ideological battles determine how you define someone. Boswell was a Blue Dog Democrat, which some folks in Iowa thought was too “moderate.” But he was with the party on most of the biggest fights, and he was supportive of LGBTQ rights far earlier than many of his colleagues ever were.

Plus, Boswell held down a tough district for Democrats for 16 years, something that is far more difficult than what many activists like to believe. He kept the seat blue even in 2010, when he had no earthly reason to survive reelection in a Republican wave year that wiped out many other Democrats in similar districts.

There are a lot of different reasons people can be successful in politics, not all of which are exactly honorable. Boswell stuck around for so long because he worked hard and was a legitimately nice man who earned the respect and loyalty of practically everyone he interacted with. He was in politics because he cared about people, and that never changed during his decades of public service.