Nate Boulton released a statement late this afternoon saying that he planned to remain in the Iowa Senate. It’s been an open question whether the Des Moines senator would opt to stay in the Legislature following the accusations of sexually inappropriate behavior that drove him out of the gubernatorial race in late May. This announcement made clear that Boulton has no intentions of leaving his elected office.

“I cannot apologize enough for the heartache caused by the stories of those who came forward in May,” Boulton said in his statement. “To those individuals, my supporters, my constituents, and my friends and family: I am sorry. I commit to making sure such questions are never raised again about my conduct.”

He expanded some upon his initial denials of the behavior from when the story initially came out, saying, “I absolutely do have differing accounts, but my perspective is likely clouded by intoxication. Moreover, my perspective has less relevance than the experiences of those who felt that I crossed lines.”

Boulton explained that excessive drinking in recent years had caused him to not handle social situations well, admitting that binge drinking had been a serious problem for him. He had been arrested and charged for an OWI back in 2011.

“I have made progress with my drinking behavior since last year and, to show this is something that I take quite seriously, for months have not had a single drink,” Boulton continued. “I made this change because I want to be the man I believe myself to be – and the man my supporters believed in. No one has seen me intoxicated, act inappropriately, or even appear to cross boundaries since November, when I made this change in my life.”

Boulton could face a challenging situation in the near future with this decision. Some of his close allies in the Senate, including Liz Mathis, Amanda Ragan and Joe Bolkcom, publicly called for him to resign back in May. More importantly, Senate Minority Leader Janet Petersen promised a full investigation into the allegations were Boulton to stay.

She released a statement an hour after Boulton’s.

“I am disappointed by Senator Boulton’s decision,” Petersen wrote. “When I called on Senator Boulton to resign two months ago, I did it because, like many Iowans, I believe that sexual harassment and misconduct should not be tolerated by anyone, anywhere. Senator Boulton will now need to answer to voters in his district, to a potential independent investigation, and to other Iowans involved in the national conversation on this important issue.”

Others wondered if the Republicans would use Boulton’s situation to hit back at Democrats as the party tries to make sexual harassment issues in state government a campaign issue. But aside from some initial statements after the Register story, Republicans have essentially been silent on the Boulton matter, perhaps not wanting to drag up their own problems.

“I believe each of us is stronger than our weakest moments,” Boulton said. “I now strive to make my example one of hope for anyone struggling through a personal crisis. I am motivated to live out that positive example – for Iowans, for my family, and for myself.”

He finished by saying he will return to the Iowa Senate in January, “humbled but determined.”

Boulton is not up for reelection until 2020. You can see his entire statement below: 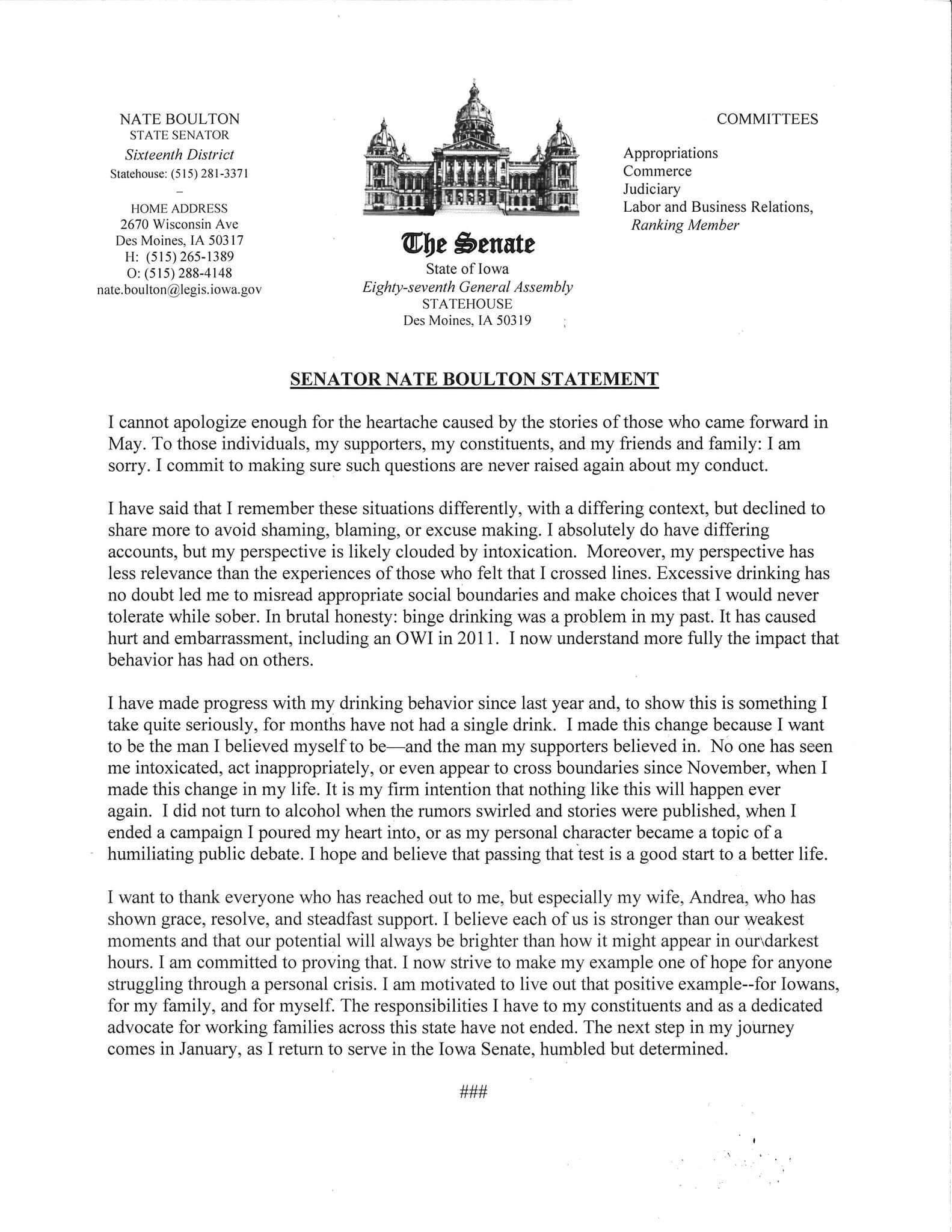 8 Comments on "Nate Boulton Vows To Stay In Senate, Cites Past Drinking Issues"