Jason Kander may have a new personal electoral goal for himself now that he’s announced his candidacy for the Kansas City mayor’s race, but his voting rights crusade will march on in Iowa and other states.

“Nothing has changed about our program here in Iowa,” Let America Vote’s Iowa state director Zack Davis told Starting Line yesterday. “We are continuing to move forward and are looking at ways to actually grow the internship program.”

That’s a good thing for Democratic candidates in Iowa who are set to benefit from one of the largest ground game operations from a national group that’s integrated into the party’s coordinated campaign in recent memory. After launching their field program on June 9, LAV’s interns and volunteers have already knocked over 20,000 doors during 375 canvassing shifts. Their experienced Iowa team aims to have around 60 full-time interns come to the state throughout the general election.

Kander made a big, early investment in Iowa with his organization, and for the better part of the year he’s criss-crossed the state to talk up his mission of causing consequences for Republican politicians who pass “voter suppression” laws. He’s been here more than any potential 2020 candidate, creating chatter about whether he’d look to a White House bid. His decision to run closer to home this year ends that, though he insists his focus on the lead-off caucus state was always about the voting restrictions Iowa Republicans voted for last year.

“Paul Pate is the only secretary of state in the country that was really the driving force behind a voter I.D.” Kander said in an interview with Starting Line during the Democrats’ recent state convention. “We work really hard at the macro level, in the press, where we no longer let these bogus arguments by the Republicans go by [on voter I.D.].” 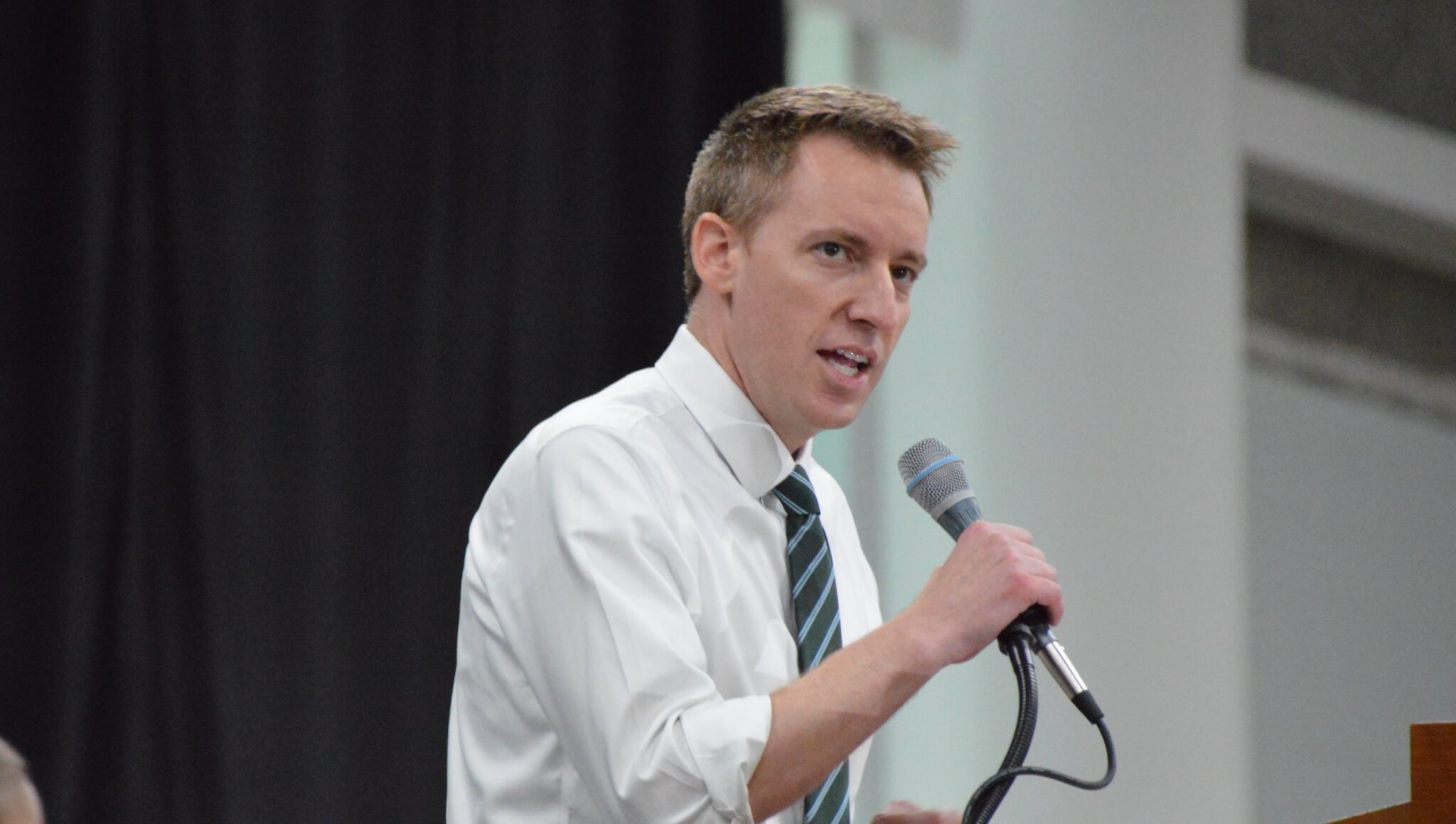 But his organization’s ground game will be focused more on ousting the Republican legislators who took that vote. The messaging on that part isn’t as focused on voting rights.

“At the micro level, in our field program, the answer is we don’t [talk about that],” Kander said. “We beat folks who are bad on voting rights. If that means our volunteers are going to be talking about a different issue that is more hyper-local, then fine. The objective here is to create a political consequence.”

To that end, Davis, a former top staffer on Barack Obama’s Iowa campaign, has worked to develop a different kind of field organization to connect with voters. For starters, it’s actually a part of the Iowa Democratic Party’s coordinated campaign, which means that LAV can share data and plan strategy with the official party operation. That keeps them to working on only non-federal races, but that’s where their focus is anyway.

“The first thing that we did was meet with all the partners in the state and figured out what would be the biggest value-add,” Davis said. “We’re not an organization that was going to come in and throw a ton of money at TV, mail. What would be the biggest value-add, and people said doors. Especially if you take a big chunk of the universe for these legislative candidates … They get to see where we’re knocking, the I.D.s that we’re gathering … The left hand is talking to the right.”

That has LAV targeting many swing legislative districts where pro-voting rights Democrats are working to oust Republican lawmakers who passed the voter I.D. bill or capture open districts. And to hit all those doors they have dozens of interns, hailing from California to Vermont, who have come to Iowa for Kander’s mission. 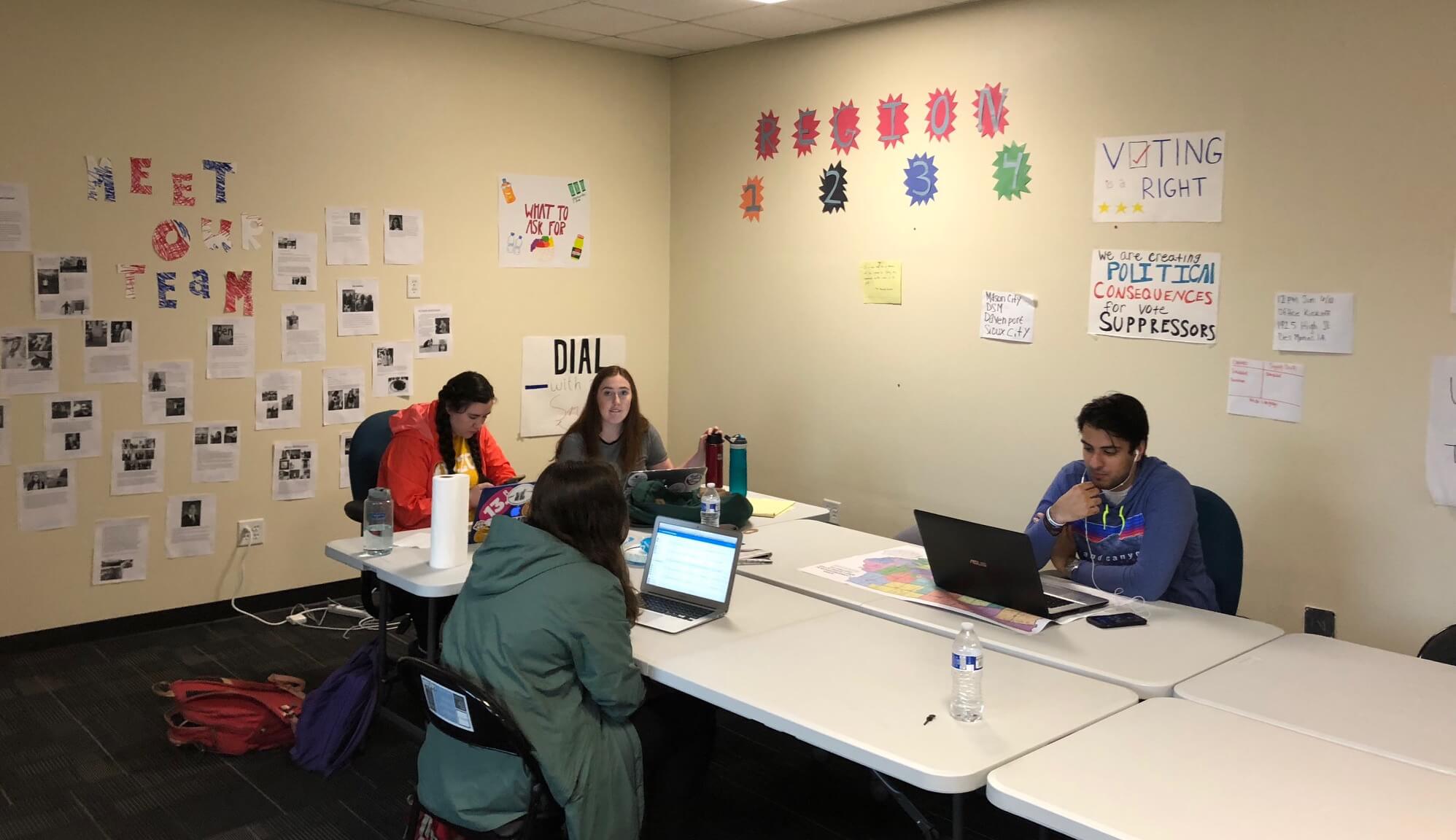 “There’s a hunger by a lot of these interns who want to do more than just grab a door packet every day and go to the doors,” Davis explained. “So, we paired up our interns in teams, usually three to five, and assigned them to either a state house race or state senate race.”

The LAV interns started researching their assigned candidates, looked at their turf and studied local issues before traveling to Iowa. Once here, they sat down and met with the house or senate candidate they’d be helping, then wrote up their own door-knocking script that they felt best reflected what the Democrat was passionate about. 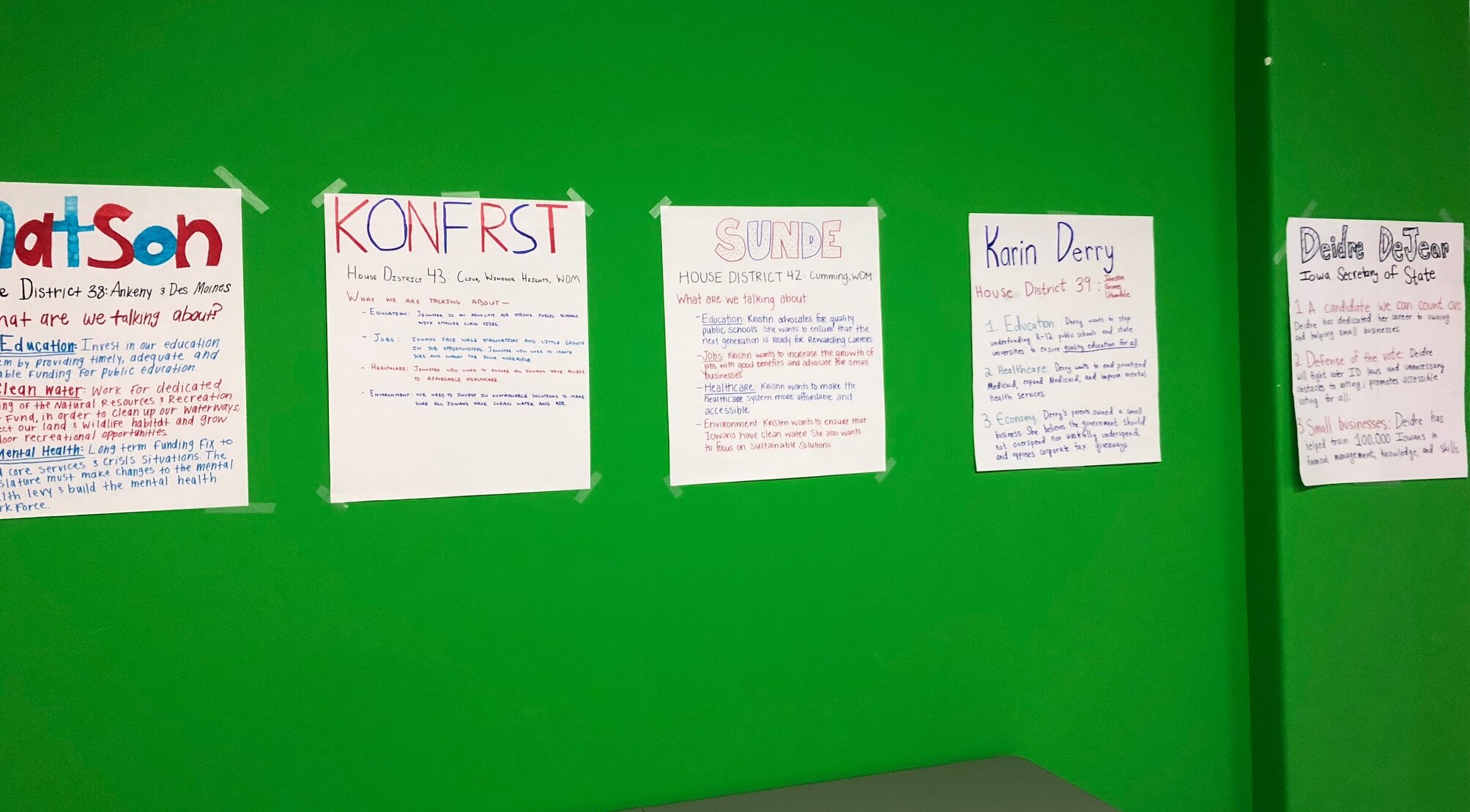 “We are delivering the message they want to in their own words, and we’re doing it from a very heartfelt place because our interns know them,” Davis said.

And that is different than most canvassing operations that Iowa usually sees. A lot of groups will send waves of canvassers to hit as many doors as possible over as many precincts as possible. LAV’s plan is to keep their interns in one district where they’ll get to know their turf, develop relationships with specific volunteers and voters, know the candidate and have real ownership.

That extends to running the program. On a rainy Sunday morning a couple weeks ago, about a dozen interns gathered at LAV’s Des Moines office, checking door packets in and out, calling volunteers and planning their canvassing with the candidates. Each day a different intern runs the reporting process.

LAV has their main Des Moines office, where some of their national staffers are stationed, while other interns work out of coordinated campaign offices in other parts of the state. The Des Moines headquarters, right by Gateway Market, is an old advertising agency’s office, complete with a green screen and recording room. 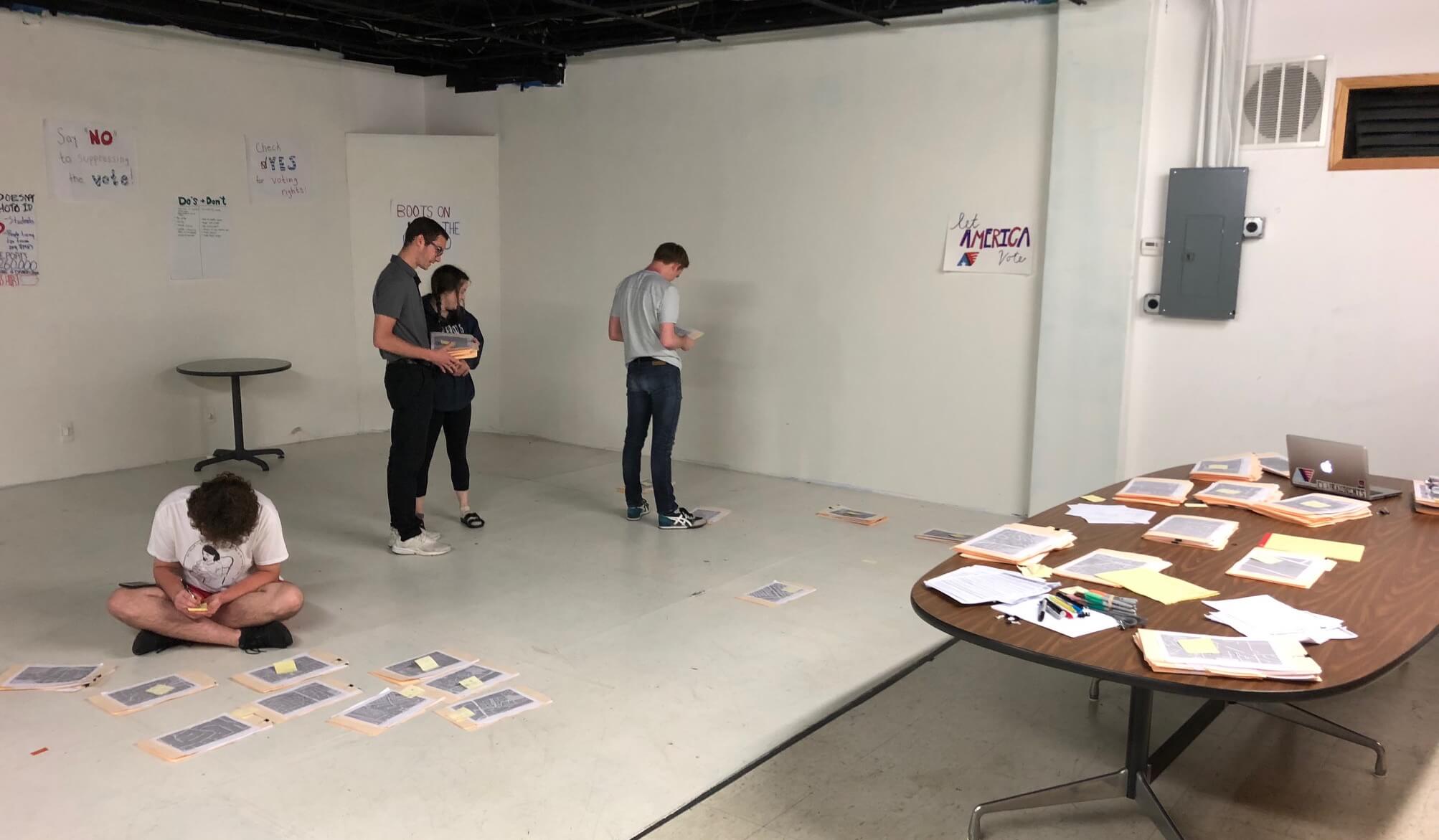 The main legislative targets for LAV is in the Des Moines metro, the Cedar Rapids suburbs, Mason City, Scott County and some Sioux City races. Polk County candidates Jennifer Konfrst, Karin Derry, Heather Matson and Kristin Sunde all have their own LAV intern teams and were on hand at the first weekend of door-knocking.

LAV is also helping in volunteer recruitment for these legislative races, which Kander said is one of the most rewarding ways to be involved in 2018.

“There’s no small jobs on campaigns, and that’s particularly true on a race like state legislature,” Kander said. “If you’re willing to show up often and do what work needs to be done, you’re going to make a huge impact on that campaign. You’re also really likely to spend a lot of time around the candidate and get to know them … when you’re knocking on doors in the heat or the cold, when you’ve spent time stuffing envelopes sitting in a chair next to the candidate who is also stuffing envelopes, you’re just far more motivated to go knock on the next door for them.” 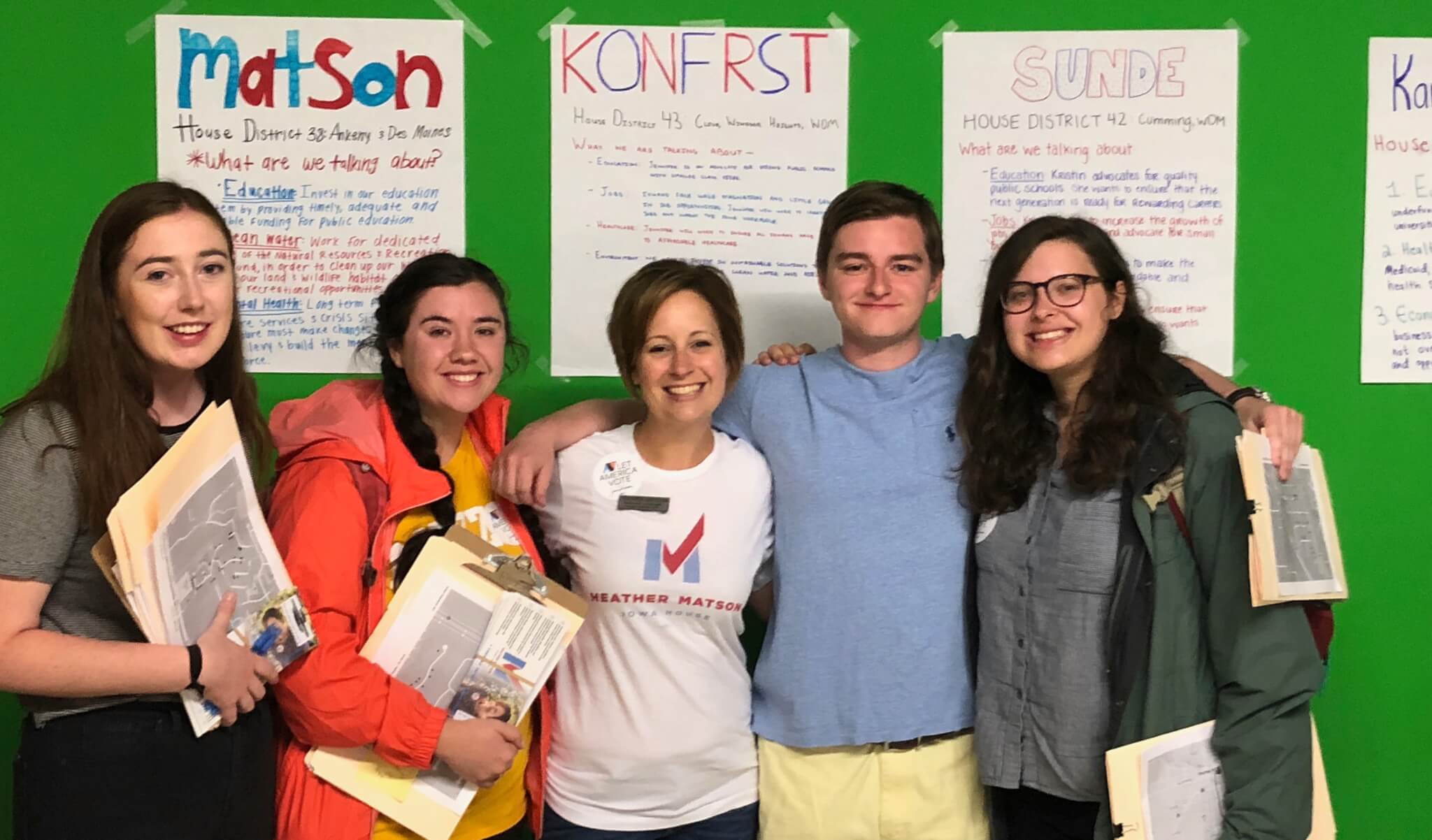 While LAV is starting with organizing down the ballot, they’re also deeply focused on Deidre DeJear’s secretary of state campaign and Fred Hubbell’s gubernatorial bid.

“I’m very excited about Deidre,” Kander said, a sentiment shared by Iowa Democratic activists. “I like her personally quite a lot. I think Iowans are going to be really excited about her campaign … One of the things a secretary of state can do is shape the conversation on voting rights and elections in the state. My belief is that Iowans are going to be excited to have a secretary of state that views voters as customers as opposed to what they have now, which is one that views them as criminal suspects.”

With Des Moines just a three-hour drive from Kansas City, Iowa may still see Kander every now and then as his voting rights group continues to organize on the ground here. And his small army of door-knockers will keep working on turning out the voters that many Republican legislators last year sought to disenfranchise.