That, anyway, is one of the more amusing findings from a recently-released poll from KBUR radio in Burlington. As is always the case with any political polling, the really interesting numbers are in the cross-tabs. And since KBUR also asked likely primary-going Democrats about their music tastes, we get a fun breakdown of how they’re divided among the gubernatorial candidates.

When looking at these cross-tabs, it’s important to keep in mind what the baseline numbers were for each candidate (Hubbell 46%, Boulton 20%, Glasson 7%, Norris 5%, McGuire 3%, Wilburn 1%, Undecided 18%). That means that while Hubbell leads fans of rock music, Boulton is actually over-performing in that measure, while Hubbell is weaker than his statewide average there.

You should also be careful in putting much meaning into these cross-tabs, as in some cases, you’re comparing very small numbers to other small numbers. For example, only 2% of the people in the poll said they preferred rap music, so the variations there are based just off a small handful of people, and aren’t very statistically significant. (Overall, Iowa Democrats’ favorite music was 26% country, 19% rock, 15% classical, 8% pop, 8% jazz, 5% Christian and 2% rap – you can make up your own mind of whether that seems like a plausible representation of the state’s primary-going electorate.)

Still, it is amusing to see Hubbell dominate the classical music crowd, while Cathy Glasson has some work to do with increasing her share of country music fans.

Okay, how about we look at some more meaningful numbers now.

The most useful numbers here are the geographic breakdowns by congressional district. 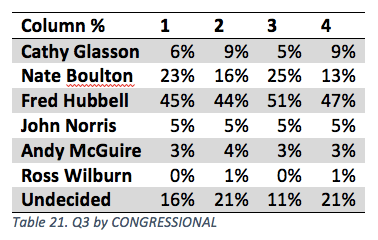 Boulton’s strongest numbers are in the 1st and 3rd Districts (the 1st is Cedar Rapids, Dubuque and Waterloo; the 3rd is Des Moines). That makes sense as he’s been running TV ads in the Des Moines and Cedar Rapids media markets. But only Hubbell has been advertising in the Sioux City and Quad Cities markets, and that’s where he has the largest leads over the other Democrats. Boulton’s numbers in the 2nd (Davenport, Iowa City, Southeast Iowa) are a bit concerning since his hometown strength is out in that southeast portion of the state.

Glasson’s best numbers come in the 2nd and 4th (Sioux City, Ames, Mason City) Districts. This also makes sense that she’s doing her best in the Johnson County-based district. Ames has an outsized impact on the primary vote in the 4th District, and she’s been doing well among the more progressive voters there.

The other interesting divide is among age groups:

Glasson vastly over-performs her statewide numbers among the youngest cohort of voters (though Hubbell and Boulton still lead there overall). I did personally notice at a recent gun control rally attended by many high schoolers that Glasson was the one the students were most excited to get a picture with afterward. Boulton outright wins voters in the 30-39 category, one of the only breakdowns in the entire poll where Hubbell tops the field.

Hubbell’s biggest strength comes from voters age 50 and above, helpful considering that even in Democratic primaries, the turnout is skewed to the older crowd.

When it comes to distinctions between blue collar and white collar voters, there isn’t a big difference from each candidates’ baseline numbers.

Nor is there a huge difference between the candidates among male and female voters. 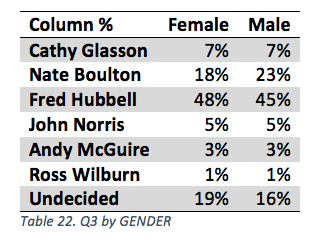 Boulton does a little better among men than women, possibly in part to his support from trade unions that skew a little more male. Hubbell has focused a lot of his campaign on his support of Planned Parenthood, perhaps leading to his slightly stronger numbers among women. The problem for both Glasson and McGuire is that there doesn’t seem to a big movement by female Democrats to back the women in the race.

When it comes to ideological splits, Glasson and Norris are attracting more liberal/progressive Iowans, but there’s not a big difference among the other candidates’ baselines and different ideological groups:

The poll itself was run from May 5 to 6, surveyed 2,315 likely Democratic primary goers, and has a margin of error of +/- 2.04% with a confidence level of 95%. Several folks have pointed out that it’s a Republican-run polling firm, Remington Research Group (though commissioned by an Iowa radio station). Take that as you will.