Exactly two months remain until Democrats decide who they want as their gubernatorial nominee in an incredibly crucial election for the future of Iowa. The candidates continue to criss-cross the state and put in extremely long hours to raise money and meet voters, hoping to close the deal before Election Day arrives.

But one thing that doesn’t feel like it’s in the closing phase of the race? The messaging. We’re in the final stretch here and the candidates are still in a very positive, neutral-sounding mode. Aside from knocking Kim Reynolds on the various news of the day, most candidates’ central pitches remain the same from when they each announced.

Missing is the contrast themes, the hard arguments as to why you should vote against this person and for me instead. There’s been no back-and-forth disagreements between the campaigns. No tough, public questioning over whether any of the candidates can really match up with Reynolds. No serious examination and debate over each candidate’s flaws.

Four of the six Democrats running for governor gathered in Winterset on Monday night for a forum with the Madison County Democrats. Cathy Glasson, Andy McGuire, John Norris and Ross Wilburn all attended; Nate Boulton and Fred Hubbell, both seen as the leaders in the race, were not.

Despite all four candidates in attendance needing the dynamics of the race to shift in some way, all were content with pitching their candidacy in a positive way to the 75 local Democrats in the room. Perhaps it’s seen as poor sportsmanship to whack people who aren’t there because they can’t respond (others would say that’s the point of doing it then!). Or perhaps it’s awkward to do so when you’re sitting elbow-to-elbow with your target. Or they’re just not up to it yet. 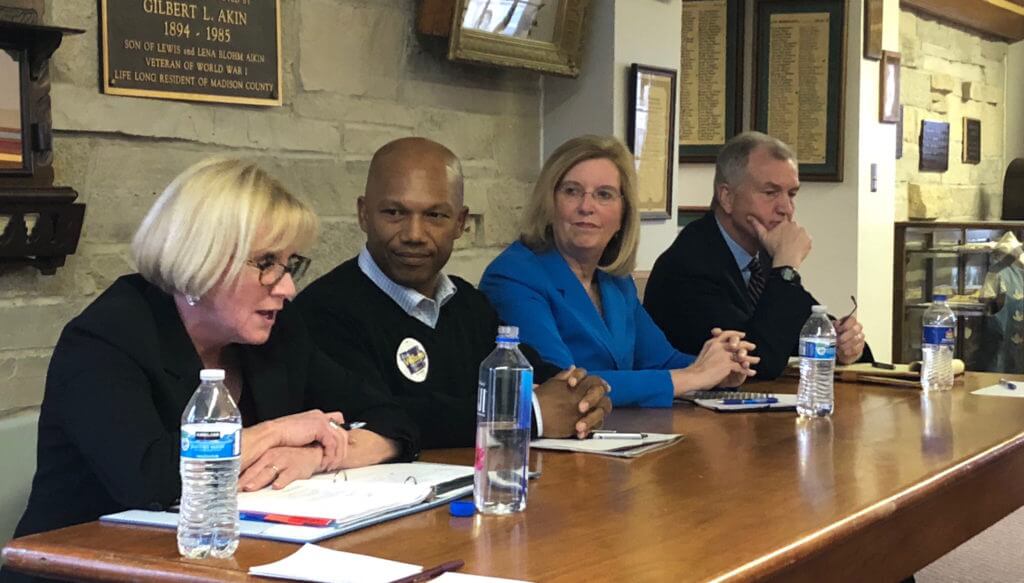 Only Norris made a single swipe at his opponents, though a rather restrained one.

“I’m in an awkward position in this primary. We’ve got well-funded candidates from the wealthy folks in Des Moines,” Norris said, referring to Hubbell and McGuire. “And Cathy and Nate from the labor PACs. But I think I’m the candidate that brings all those folks together in the general election.”

While folks like myself get the point he’s making, Norris probably needs to connect the dots further here for the full impact. Why does any candidate’s fundraising base mean they’ll only appeal to a certain faction of the party? Are Glasson and Boulton’s labor and policy views too off-putting to swing voters and moderate Democrats? Can Hubbell not be trusted on labor issues due to some of his backers? It seems like there’s a “Yes, and”question here that the front-runners’ opponents haven’t made the case on yet.

The more challenging attacks on candidates’ credibility have largely been contained to a small handful of Facebook flamewars started by activists and one tough story in the Des Moines Register on Glasson.

Otherwise, the Democratic primary has been a noticeably peaceful and calm affair. In fact, you might just call it boring.

How did we get this way? And is it a good or bad thing for Democrats overall that the primary has stayed almost uniformly positive?

There’s varying opinions on both fronts. Let’s start with the why.

The biggest likely reason for the harmonious tone is simple: it’s a large field of candidates who face the possibility of the nomination being decided at convention. In any primary with a lot of candidates, you risk blowback when you launch a negative attack on one of your opponents. You might bring down your intended target, but you also get people angry at you.

The classic case of this was the 2004 Iowa Caucus: Howard Dean and Dick Gephardt led the pack until they went nuclear on each other, allowing John Kerry and John Edwards to leap-frog them into first and second place. This is especially a concern with convention delegates. Were Boulton to blast Glasson, he’d have an extra difficult time encouraging her delegates to side with him in realignment phases.

But this all also assumes there will be a convention. And that only happens if no candidate gets 35% of the vote on June 5.

Right now, it’s largely assumed that Hubbell leads the rest of the field statewide thanks to his constant ad presence on TV. Others suspect that Boulton is close up there, as well. But most of the campaigns are doing regular polling. They know if any candidate is starting to push 35%.

Several candidates, including Boulton, Glasson and Norris, believe they have a good shot of winning at convention. If your polling doesn’t show Hubbell (or Boulton) breaking 35%, why risk going on the offensive now?

We’ll see how things play out over the next two months. Both Boulton and Glasson have the resources to run negative TV ads on Hubbell if either are worried he’s getting close to the 35% mark (of course, both of those campaigns also think they can win outright, as well). And a concentrated message on one candidate’s negatives may be all it takes to force a convention.

And there’s risk for any candidate – Hubbell included – in not trying to define your most-threatening opponent, lest they catch fire at the end and overtake you.

So, to the other question: is it helpful or not to have a peaceful primary?

On the one hand, Democrats haven’t forgotten the lasting bad feelings from the 2016 presidential primary that undermined the party’s chances against Donald Trump. They are remiss to see a repeat where intra-party attacks whip up candidates’ supporters so much in opposition to each other that it’s difficult for the party to come together and fully back the eventual nominee. There’s also worry that it simply does the Republicans’ job for them by softening up the candidates.

On the other hand, whichever Democrat emerges as the party’s nominee will immediately face withering attacks from Reynolds’ campaign and the Republicans. Nearly all the contenders are first-time candidates. Some Democrats would like to see how their preferred candidate responds under fire (no one wants a repeat of Bruce Braley, who fumbled his responses to GOP attacks).

Others would like to know what kind of potential lines of criticism are even out there for each of the Democratic candidates. Primaries often serve as a vetting process, but there hasn’t been too much of that yet in this one.

There’s also Democrats who remain frustrated over the party’s inability to pass key priorities the last time they held the trifecta of the governor’s office, House and Senate. A lot of activists would like to be absolutely sure that the Democratic candidates won’t tack to the center too much once in office.

The most effective way to clear any of those questions up will be for the candidates and campaigns themselves to openly press their opponents on them. Maybe the best place for that will be the upcoming debates, though those don’t appear to be starting until May. Still, the potential pitfalls of such a strategy remain.

Finally, would a more contentious race bring more interest and news coverage to the Democratic primary, and thus more turnout? Or would a negative TV ad war just turn people off?

As with all things in politics, it’ll be a matter of execution. There’s plenty of ways to compare and contrast yourself with your opponent without stepping over the line of decency or risking party unity. There’s also a lot of ways to screw it up. How the candidates decide to thread that needle will play a big role in how the primary turns out.