Iowa Republicans are pushing a sneakily dangerous resolution through the Iowa Legislature that could upend the nation’s constitution in unpredictable ways if successful. A Senate subcommittee recently moved forward Senate Joint Resolution 8 to full committee, which would add Iowa to a national movement calling for a convention of all 50 states to amend the U.S. Constitution. It’s part of an effort by the American Legislative Exchange Council (ALEC) and Iowa’s bill is literally word-for-word the same as their proposed legislation, as Progress Iowa discovered recently.

Compare the introduction of both documents for yourself. Here’s the text of Iowa’s Senate Joint Resolution 8: 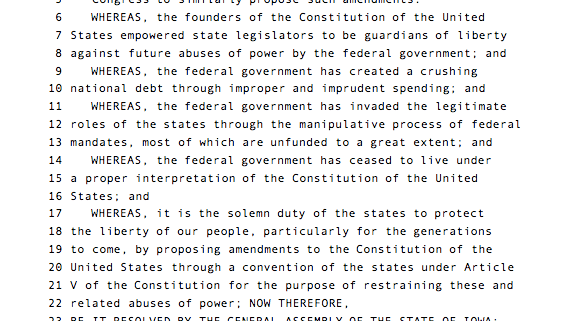 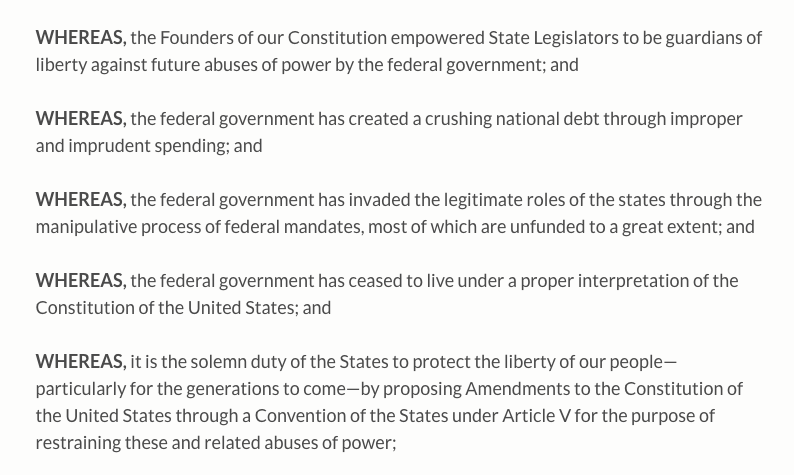 Iowa Republicans have come under fire from progressive groups for several years for their close relationship to ALEC and for pushing the national conservative organization’s legislation upon Iowans. Many Republican legislators have pleaded ignorance of such ties, but the close phrasing of certain proposed bills to ALEC preferred language has undermined those claims. This is one of the most blatant cases yet of where Republicans have simply copy and pasted text from ALEC for one of their bills.

Oddly enough, the constitutional convention bill may not work out exactly as Republicans hope it to, which is why even some fellow conservatives are opposed to the effort. Indeed, the unpredictability of it all is what brings many to call it an extreme and dangerous approach to radically rewrite the Constitution.

There has not been a constitutional convention in America since 1787 – the first and only. Article V of the Constitution spells out the ways to amend the nation’s governing document – the one that’s typically been used is amending through Congress. But states can also force a convention to propose and vote on amendments, so long as 2/3 of state legislatures sign on to the idea.

ALEC wants a convention called in order to push a balanced budget amendment for Congress (though opponents argue there are simply times where the national government has to do deficit spending for national emergencies or defense reasons). Such austerity proposals would certainly cause deep cuts in Social Security, Medicare and Medicaid. Other ideas include allowing states to ignore certain U.S. Supreme Court decisions that they do not agree with. ALEC has already come dangerously close to its goal of getting the 34 states needed for a convention. Iowa’s addition would leave if just a handful of states away from reality.

The problem is that a constitutional convention could very easily become a free-for-all. It’s not clear who all would make up the delegates of such an affair. You could have far-right extremists control the debate who could undermine basic rights under the Constitution. Or, depending on how national and state elections go as a convention is called, liberals could run the discussion, leading to amendments that solidify the right to an abortion, overturn Citizens United or ensure gay marriage isn’t simply legal through a Supreme Court decision.

Regardless of whatever happens with the constitutional convention push, the similarity in language should put to rest the question as to whether key Iowa Republican lawmakers are taking direct orders from the Koch-backed ALEC organization.