Theresa Greenfield’s days start early – and for good reason. As the president of a real estate business and a Democratic candidate for Iowa’s 3rd Congressional District, she has a lot to get done in any given week.

“I’m a farm kid, so I get up with the sun,” Greenfield, who grew up in tiny Bricelyn, Minnesota, says in a recent interview with Starting Line. “Right now the sun doesn’t get up very early, so I get up at 5:00 a.m.”

Her early morning is spent chatting with her husband over coffee, taking her two dogs out for a walk and responding to emails for her campaign and work. She typically gets into her office at Colby Interests, a Windsor Heights-based, family-owned commercial real estate company, around 7:30 a.m. There she works on business-related matters, and once those are wrapped up around mid-day, she goes into campaign mode.

Lunches are usually spent with voters or potential donors, afternoons with her campaign manager to talk strategy and go over what she calls the “daily rock” – the main goal for the day. Afternoon and evening is filled largely with call time to raise money, as well as some speaking engagements to local Democratic or community groups. Greenfield is back home around 8:30 or 9:00 p.m., where she goes through a few more work and campaign emails, spends some more time with her dogs and, eventually, goes to sleep.

It’s a tough schedule to maintain, and one she knows won’t slow down if she’s successful in her bid for Congress. But she describes it as nothing less than what voters would expect.

“A member of Congress makes $175,000 a year, and the people of the district need to know you’re working hard to earn that,” Greenfield explains. “Not many people in this district make that kind of money. So, hard work is where you start, and then you need to do more than that in my opinion.”

There is one break in her calendar, however.

“One time you won’t get ahold of me is Friday night – that’s date night with my husband,” she says.

All those hours on her campaign will be necessary if she hopes to emerge victorious in November. Democrats have badly wanted to win back Iowa’s 3rd District for years, which contains the heavily-Democratic city of Des Moines (as well as rural, Republican-leaning Southwest Iowa). But the party has come up far short in its past two efforts – Republican David Young won by 11 points in 2014 and 13 points in 2016, despite Democrats’ favorable trends in the Des Moines suburbs.

Young’s dogged work ethic (he visits all 16 counties of the 3rd District every month) and seemingly-moderate persona (he still votes nearly all of the time with Steve King) makes him a tough incumbent to beat in this swing district.

To even get to a matchup with Young, Greenfield first needs to win in a competitive, seven-way Democratic primary. One of her opponents, Eddie Mauro, can and has self-funded to give himself the cash-on-hand advantage in the race ($330,000 compared to Greenfield’s $210,000). Another contender, Pete D’Alessandro, just received the endorsement of Bernie Sanders. And a third Democrat, Cindy Axne, has a strong campaign that appeals to many of the same voters that Greenfield’s does.

But Greenfield has been impressing people in recent months. She found herself on the cover of Time Magazine a few weeks back for a story that highlighted strong female candidates around the country. She’s raised the most funds from individual donors in the primary, turning some heads with her initial $200,000 haul in last year’s 3rd quarter – an solid sum for a first-time Iowa candidate. And several labor organizations have endorsed her, including AFSCME Council 61 and the Southwest Iowa Building Trades. So has Illinois Congresswoman Cheri Bustos and Des Moines Councilman Josh Mandelbaum. 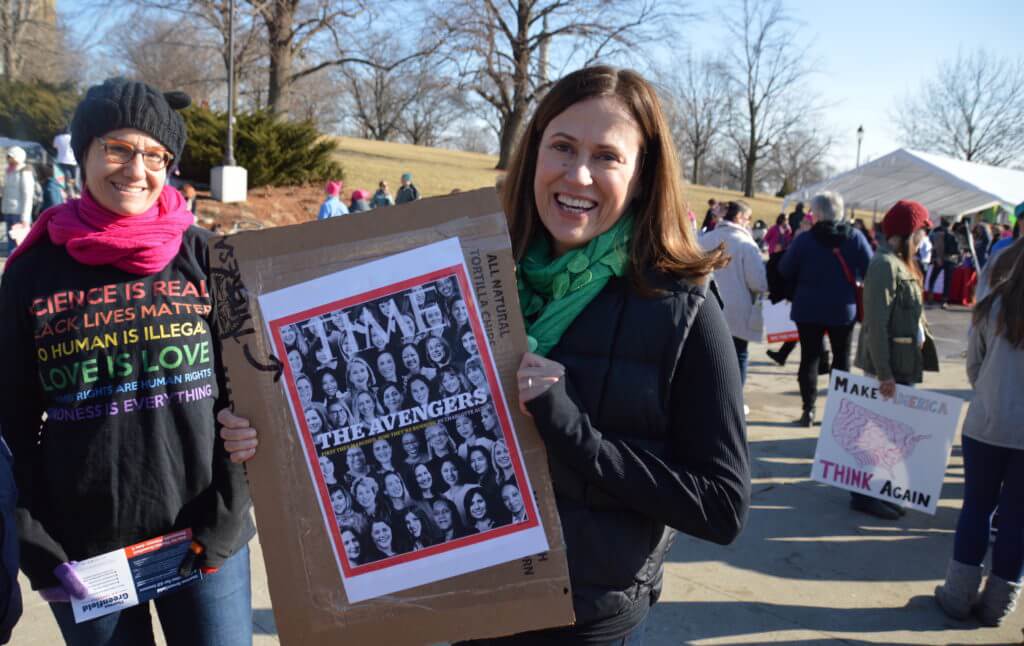 Most importantly, she’s impressed Democratic primary voters with her speeches and her own personal story at events around the district. Raised on a farm in Minnesota, she’s worked her way from an urban planner at a home-building company to the president of a real estate firm.

But it’s the tragic moment from early in her personal life that gets many people’s attention.

Her first husband was a journeyman lineman and IBEW (electrical workers union) member who was killed on the job. At the time of his death, Greenfield was just 24 years old with a one-year-old son and four months pregnant with another. Social security, workers’ compensation and help from her family kept her on her feet during that time, allowing her to go back to college to train for a new career track to take care of her family.

It’s not an easy story to tell, especially on the day she visited an IBEW union hall in Des Moines. Inside the building is a piece of art designed by one of Greenfield’s cousins, who was close friends with her first husband. It’s a painting of a lineman’s boots next to a pair of heels, symbolizing the family bond of a worker who goes out each day for a dangerous job. After some initial tears, Greenfield pulled herself together to walk into the union hall and give a speech to the members.

“Yep. It is very hard,” Greenfield says of recounting her life story to rooms filled with strangers. “Everyone has a story that they struggle with, whether it’s suicide in their families or something else – what it reminds me of everyday is that everybody has theirs. They’re just like me. It takes bravery to tell those stories. We can’t fix it or help people with it if we don’t know about it. Getting rid of some of that stigma – in my case, it’s those lazy people, that’s what those benefits are. That’s not what they are. They’re a hand-up … to people that are headed to poverty. People who have had some really bad things happen to them that need assistance.”

Connecting with people on a personal level is a key focus of Greenfield’s, who feels that a lot of the Democratic Party’s problems recently is that voters just don’t feel respected by the party. Even if Democrats’ core issues poll well, when candidates can’t relate with voters, they won’t get their vote.

“I don’t know if voters are looking for you to match up with you on every single issue, but they are looking for us to understand and be appreciative of what Iowa is, which is a state of small towns and of small businesses,” Greenfield explains. “They just haven’t felt heard by the Democratic Party. If that’s how they feel, then it’s true, in my opinion … It’s a lot of sense of elitism, like Democrats are just this elitist group. And we’re not. And we are. Whatever. If they think we are, then we are.” 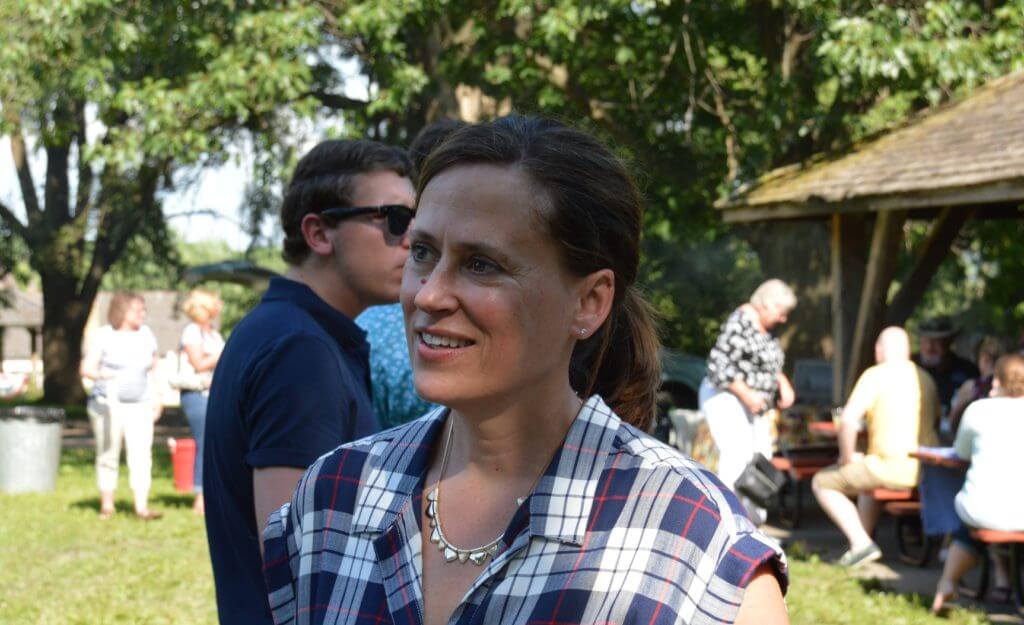 She hopes that her background as a farm girl can help relate, even in a district that’s largely urban. While most voters here live in the city, she notes that many of them originally came from rural Iowa or have a strong affinity for it. She describes how she sat next to a woman at a community event in Des Moines last month who was originally from Lake Mills, Iowa, just over the Iowa-Minnesota border from her hometown of Bricelyn.

“They couldn’t be 10 miles apart,” Greenfield says. “Then we started telling stories. I call it Lapland.”

Lapland is how she classifies the 20-mile stretch of land on either side of the state border in which each state’s communities “overlap,” and she takes out a notepad to draw a diagram of it. Greenfield’s father banked in Rake, Iowa, and used the farm elevator there. Their family went to closest Catholic church to them in Blue Earth, Minnesota, which had many members from Iowa. She waitressed at a Country Kitchen there as well.

“We were giggling about all these things that overlap. She said, ‘Oh yeah, I dated a guy from Wells.’ Of course she did. No walls. No walls. Not in Lapland,” Greenfield recalls with a smile.

She’s used that rural upbringing – which she describes as “Heartland wisdom” – to inform her conversations with voters, especially those outside the Des Moines metro area.

“There’s a real economic bubble around Polk County, Dallas County,” she says. “When you look at new business generation, 90% is happening in those two counties. So maybe you go to Page County, where they’ve lost businesses in the last 10 years. It’s easy to be in this metro area and say the economy is great – well, sure, but not for your neighbors.”

That’s not to say she’s not also addressing the concerns of people who have been left behind in the metro area’s success.

And that’s where she sees Iowans being poorly served by their current representation in Congress and the White House. Donald Trump’s bombastic talk of trade wars lowered commodity prices for farmers. Young’s vote to repeal the Affordable Care Act has undermined everyone’s healthcare security.

“I’ll let people decide if they like or dislike David Young or Theresa Greenfield. But how he votes is not in the best interests of the majority of Iowans,” Greenfield says.

If Greenfield does emerge as the Democratic nominee, she will join a number of female candidates in Iowa (and many more nationally) looking to defeat Republican incumbents in a year where female empowerment has been at the forefront of American politics and culture. To her, though, it’s just one more step in a larger, ongoing struggle in America.

“I’m thrilled that it’s this point in time, but my whole life has been this point in time,” she says. “When I was coming of age, that’s when Title IX came on board. I’ll never forget we got our first official basketball and volleyball teams. It was still really skewed toward the boys. We got hand-me-down uniforms … We got to use the gym, but only when the boys didn’t want to use it … So, here we are with the Me Too conversation, and I’m delighted that we’re having it. And there will be conversations in the future, too.”

She hopes to be at the table in Congress when those conversations happen, noting that it’s unacceptable that only 20% of Congress is female in the year 2018. To get there, she’ll keep up her daily routine of long hours on the campaign trail and pitching her story to voters, even when its difficult.

“Sometimes it’s hard. But hardworking families are worth it,” Greenfield says. “They are taking it in the shorts out there right now. Wages haven’t kept up, we know that. The cost of everything’s gone up. If telling my story can help people, good. Because those decisions in D.C. really do affect people’s lives.”

The primary for the Democratic nomination is on June 5. If no candidate receives 35%, the race goes to a nominating convention. Greenfield’s website is here, her Facebook page is here and her Twitter handle is here.