State Representative Chip Baltimore was removed from the chairmanship of the House Judiciary Committee this morning following his arrest last week for an OWI and weapons charge. Speaker Linda Upmeyer announced that Representative Zach Nunn will be taking over in his place.

Baltimore, a Republican legislator from Boone County, was pulled over on Highway 30 in Ames around 3:30 a.m. on Friday after local police got calls of an erratic driver on I-35, the Ames Tribune reported. When Baltimore was stopped, police found he had a 0.147 blood alcohol level, nearly twice the legal limit to drive. He was also charged with possession of a weapon while intoxicated.

The four-term incumbent certainly did his reelection effort no favor, which was unfortunate timing for him considering that not even 24 hours before his arrest, a strong Democratic challenger announced his candidacy.

David Weaver, a local farmer, launched his campaign on Thursday for Baltimore’s House District 47, which covers Greene County and most of Boone County. Weaver is a native of Rippey, a small town in Southeast Greene County with a population of 285. He’s a member of the Iowa Farm Bureau and the Iowa Soybean Association – he also is part of the Practical Farmers of Iowa organization, and plants about 20% of his acres with cover crops.

“I’m incredibly proud to have been born and raised in Iowa and I’m running for the Iowa House to bring positive change to our state and get us moving in the right direction again,” Weaver said in a statement last week. “I’m running to fund our public schools, raise wages in our local communities, and to help fix our broken health care system.”

Weaver, a graduate of Central College, farms the same land his grandparents once did. Several members of his family have served in elected office in Greene County, including his mother, who was president of the East Greene School Board.

Although Baltimore has won his last two races by large margins, this is exactly the kind of rural district that could flip to blue in a wave election year. With an incumbent Republican weakened by an embarrassing OWI charge, this seat could be competitive even in a normal electoral year. 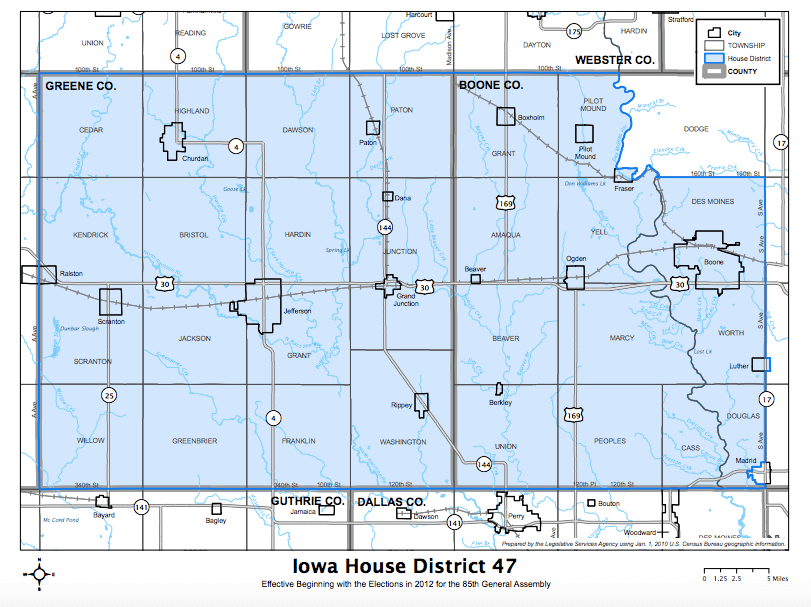 Donald Trump bested Hillary Clinton here in 2016, 55% to 38%, but Barack Obama defeated Mitt Romney in the district 52% to 46% four years earlier. In the 2014 secretary of state race, which many Iowa political watchers use as a good judge of how well a strong Democratic candidate can do in a Republican year, Democrat Brad Anderson narrowly edged Republican Paul Pate in HD 47, 48% to 47%. There are 6,939 registered Republicans, 5,619 registered Democrats and 7,867 registered No Party voters.

Boone County Democrats are a particularly strong organization – local activists got several progressives elected to the Boone City Council this past November. We saw in the recent Sioux City special elections how a well-functioning local county party can help move vote margins in Republican-leaning districts.

Baltimore himself had pretty close races before the previous two cycles. He won his first race in 2010 by ousting Democratic incumbent Donovan Olson by just 23 votes. He defeated Olson in rematch in a redistricted district in 2012, 52% to 48%.

With Iowa Democrats sensing a chance to win back a majority in the House this year, Baltimore’s district could become a major pick-up opportunity in 2018.