On a bright and sunny Saturday afternoon, one year to the day of Donald Trump’s inauguration, close to 10,000 people gathered outside the Iowa State Capitol building for this year’s Women’s March. Thousands of activists, voters and concerned citizens came out sporting pink clothing and hats, homemade signs and a passion for fighting back in 2018.

Angered by both the Trump presidency and Iowa Republican legislators who rolled back rights and healthcare access for women last year, the crowd was once again one of the largest demonstrations in recent Iowa history (though smaller than the 2017 gathering). Beyond the issues discussed by the event’s speakers, the attendees had thoughts about Trump’s presidency, the campaign for Iowa governor and getting local Democrats elected to the state legislature.

“We’ve made so many strides in the last 30, 40 years that basically everywhere you turn, there’s somebody trying to undo it,” said attendee Rachel Prescott, who wore one of the pink hats that’s become a common sight at Trump-era protests. “And now they have the power to undo it and it makes me angry.”

Alex Schuman and Tiffany Morlan marched at the Inauguration Women’s March in Washington, D.C. last year and have since moved to Iowa.

“It has been a crazy year,” Morlan said.

“The last year has really shown us that most of the fears we had at the beginning of his administration have come into fruition,” Schuman, who used to be a journalist in D.C., said. “[Trump] pushed me to the edge to go and get involved, rather than not have an opinion.”

Vicki Stark and David Johnson (not the senator) noted that they were frequent international travelers, and were embarassed when explaining overseas how Trump managed to get elected.

“Battles we fought in the ‘60s are now the same battles people are fighting today and it seems just ridiculous,” Stark said.

Many people brought their own homemade signs to the event, covering topics both around female rights and just progressive policies in general. 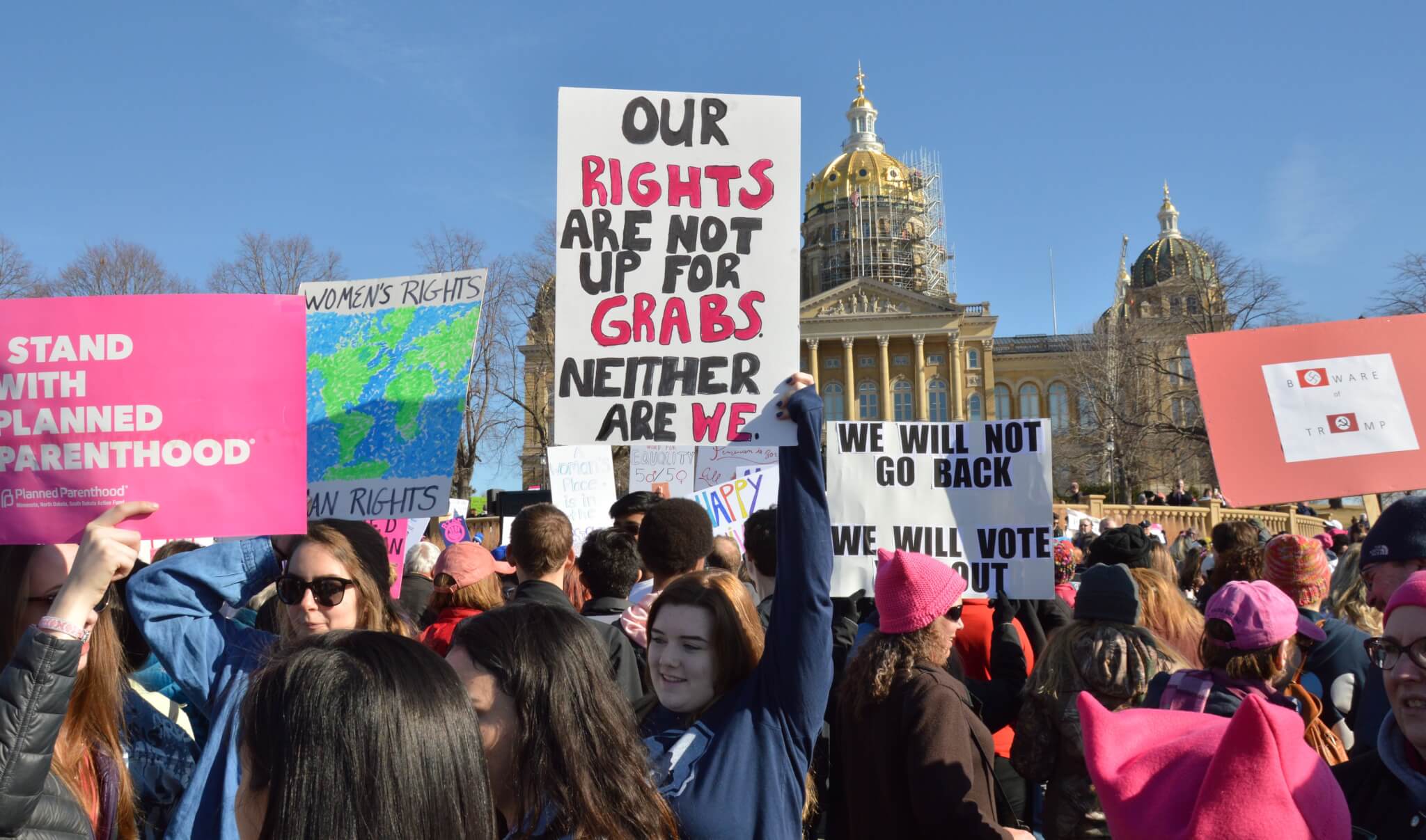 Some had messages of defiance and hope. Others were designed to get a laugh in support of the overall cause. 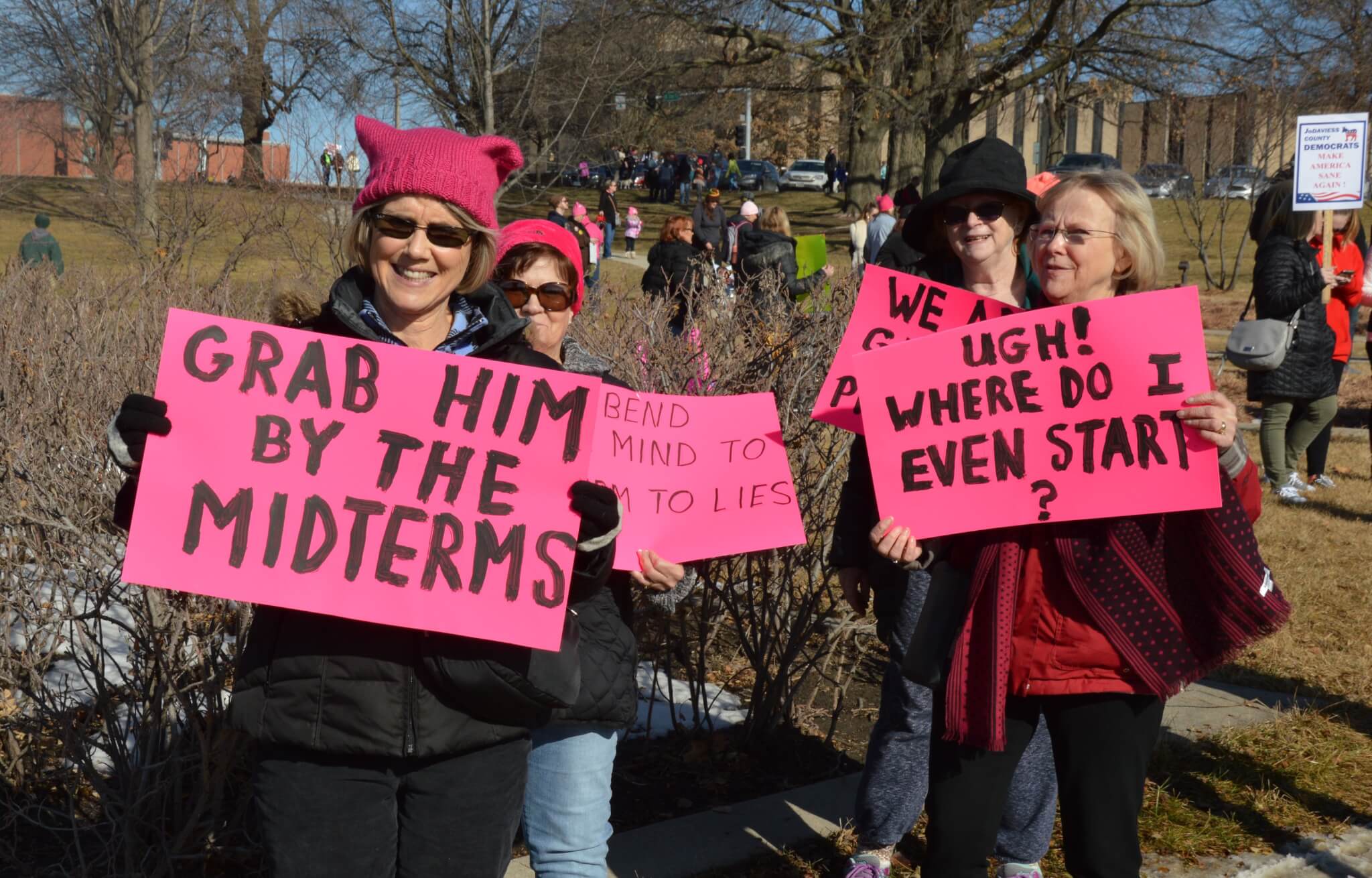 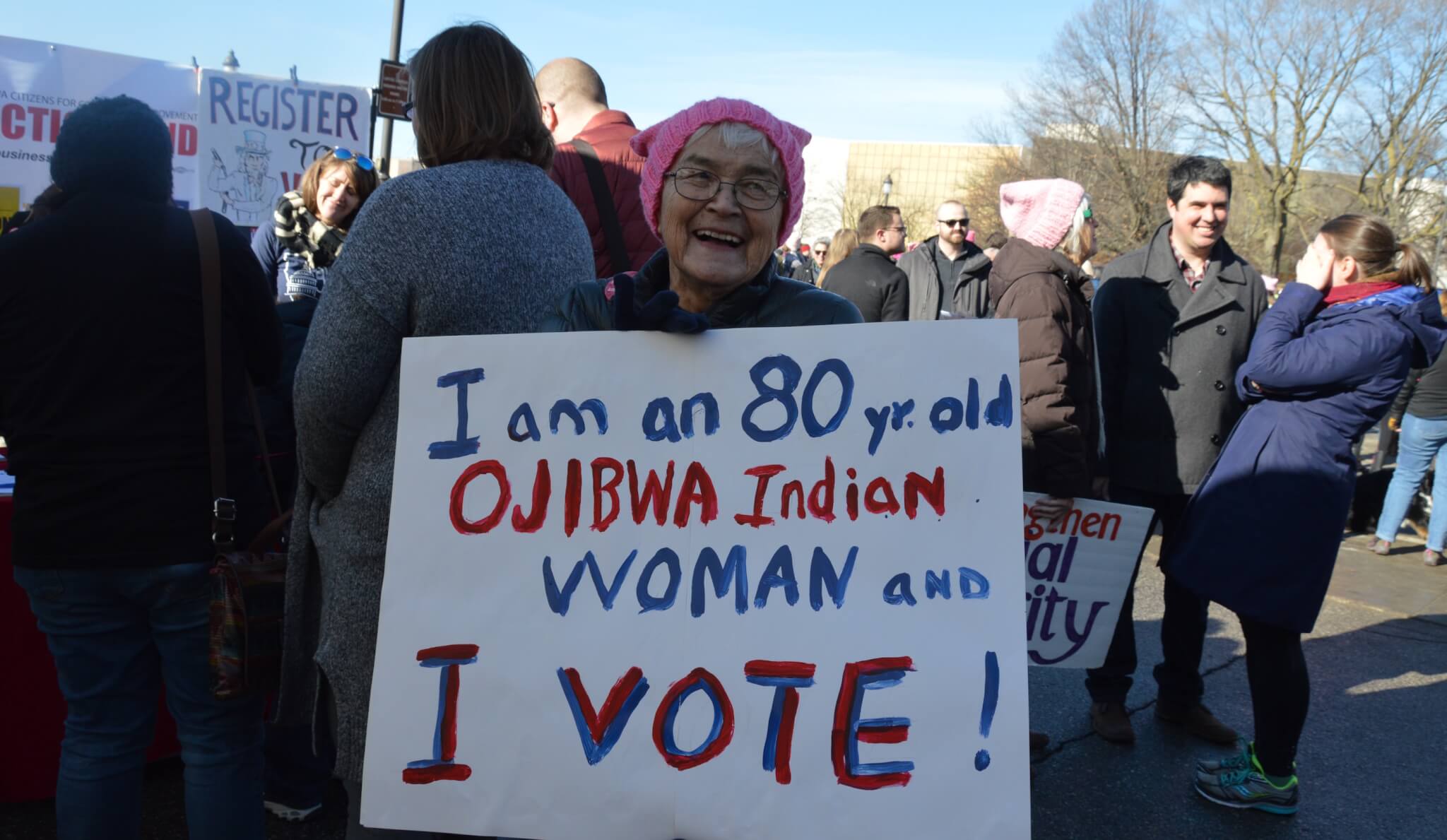 While the audience was probably around 80% female, plenty of men attended as well to show their solidarity and support. 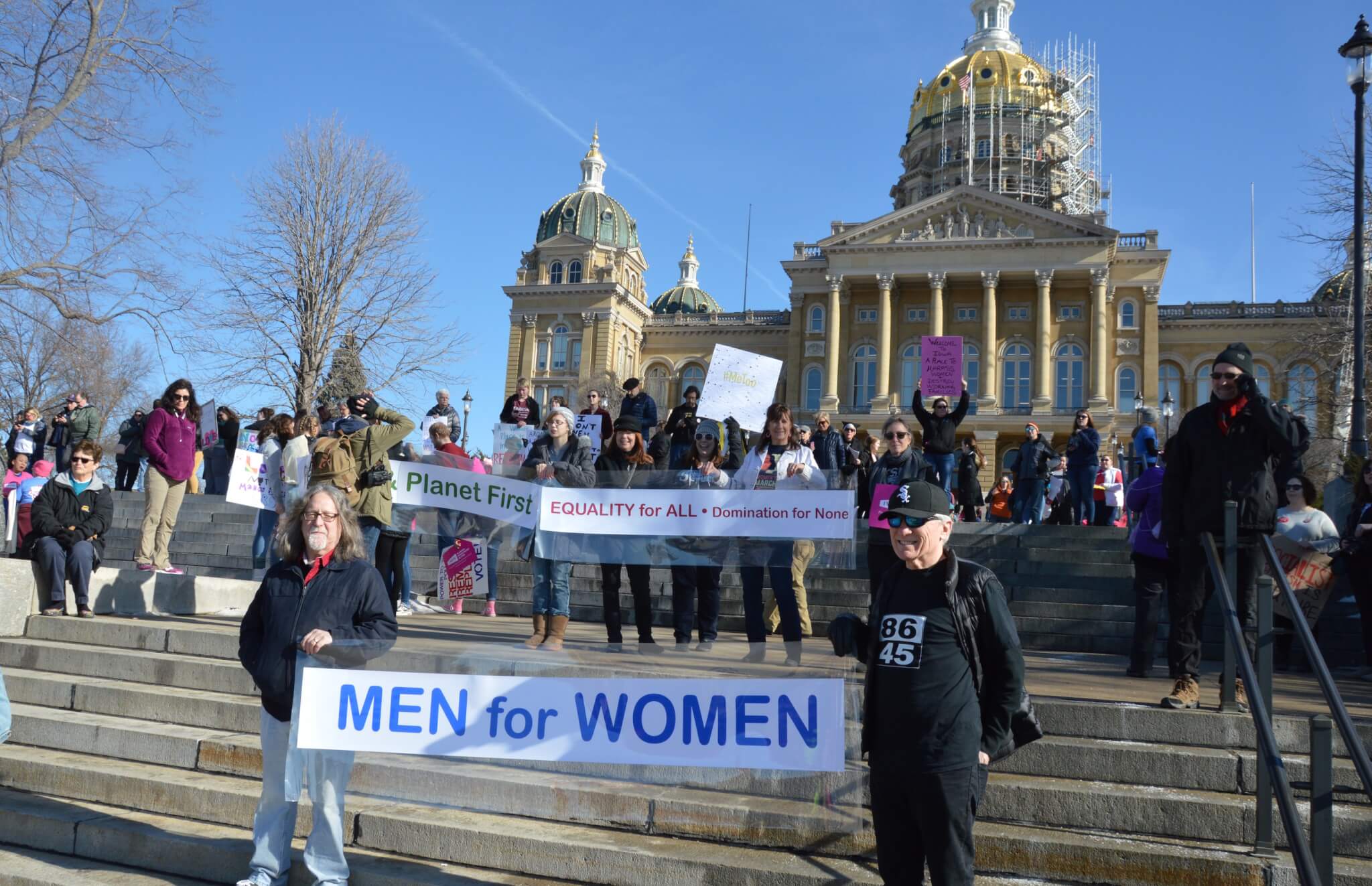 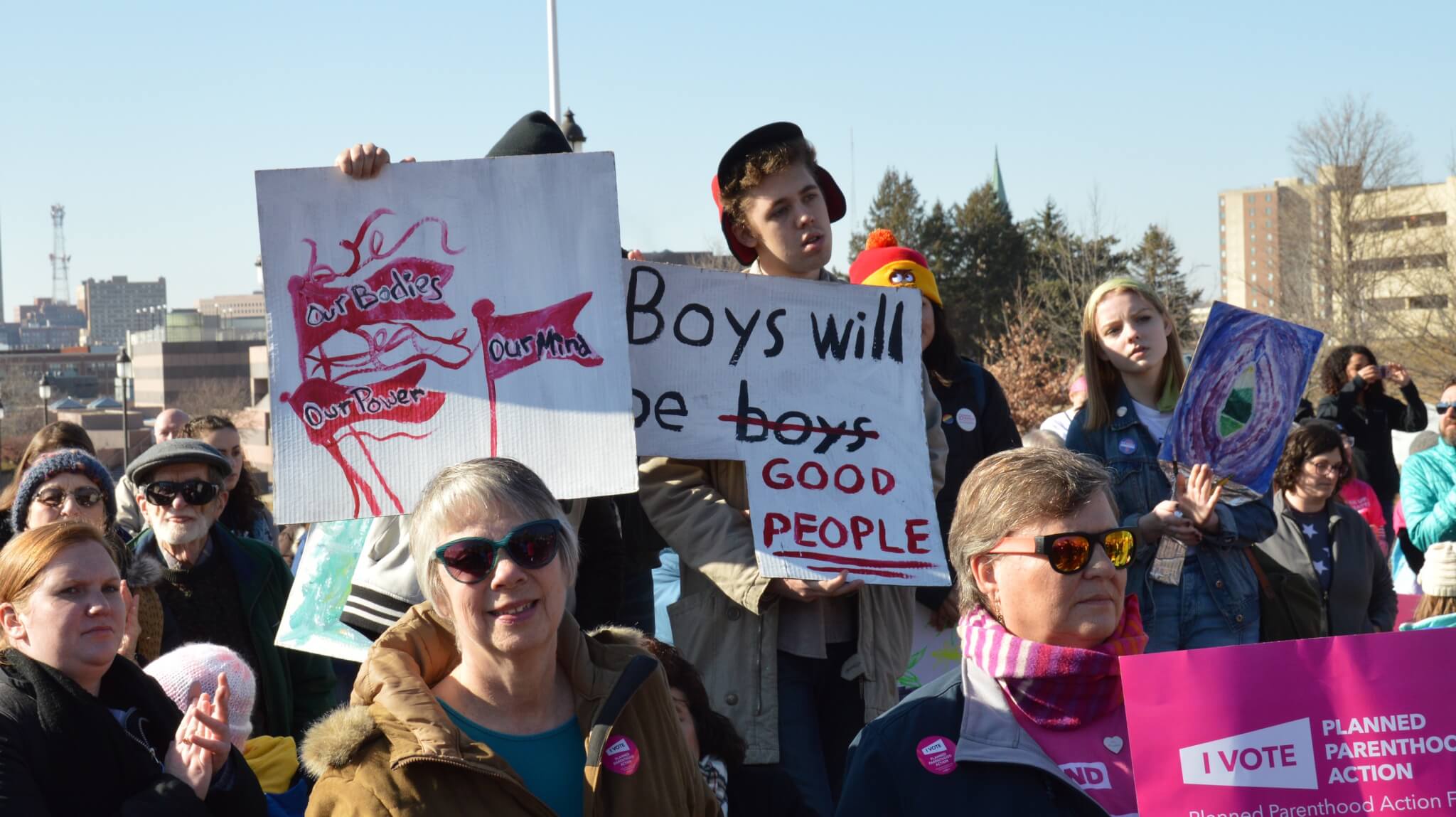 Christopher Bates attended the rally as one of many people spurred to new action from Trump’s election.

“We’re all a little distraught with the direction this country has taken … after [Trump’s] election,” Bates said. “I decided I wouldn’t just sit out at home and mope, but get out and get involved.”

The featured speakers at the rally was a group of women with diverse backgrounds – some were elected officials, some were activists.

“We can’t sit down and pop popcorn, we’ve have to get up and walk and we have to make our voices heard,” said West Des Moines City Councilwoman Renee Hardman, who won her seat this past November in a bit of an upset. “We have to organize and we need to make a difference!”

Several speakers touched on the fallout from specific legislative changes that Republicans pushed through in last year’s legislative session.

“Until recently, I was using a NuvaRing as my form of birth control and I loved it,” said Chelsea Chism, a student and Planned Parenthood volunteer. “It was covered financially under the Iowa family planning waiver, making it accessible to me. However, the Iowa family planning waiver has since been defunded due to politicians here in Iowa who targeted Planned Parenthood and are targeting patients like myself.” 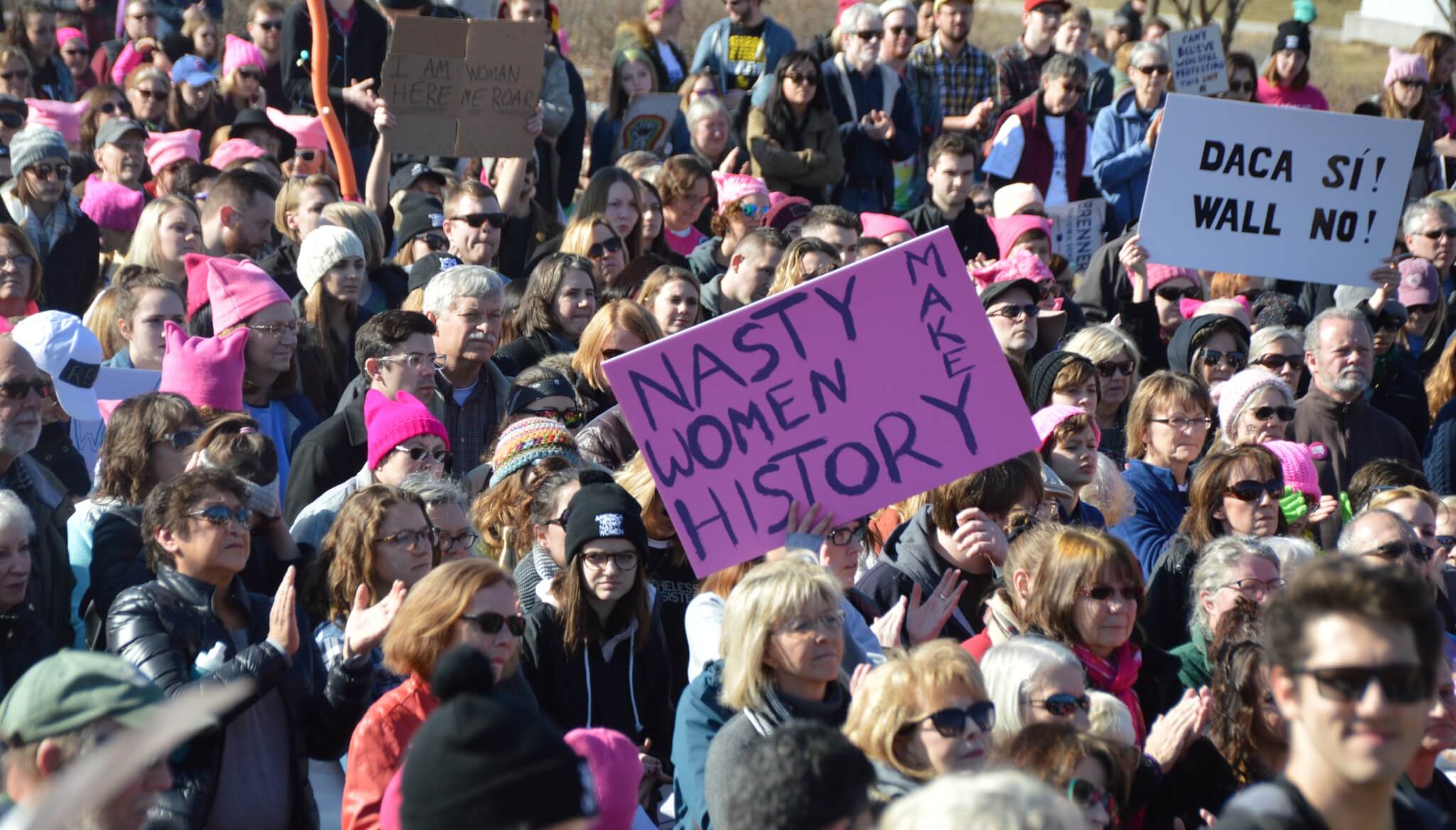 Dema Kazkaz, a Syrian-American activist and faculty member at Hawkeye Community College encouraged optimism in the crowd that their efforts would have an impact.

“We must rise – change is on the horizon!” Kazkaz said. “When we stand together, nothing and no one can diminish our voice, and this darkness will soon vanish. If you cannot hear our voices, please hear our votes.”

Cecilia Martinez, the student body vice president at Simpson College and a DACA recipient, told talked about how their DACA waiver would only last for several more months. Martinez’s brother had been deported, and Martinez worried about the inability of Congress to come up with a long-term deal to fix the issue.

“We need legislative action and we need it now. We need to pass a clean DREAM Act,” Martinez said. “I am two semesters away from graduating college … I will not apologize for my existence in this country.”

Mazahir Salih, recently elected to the city council in Iowa City, related her immigrant story as a way of inspiring others who may want to run for office. 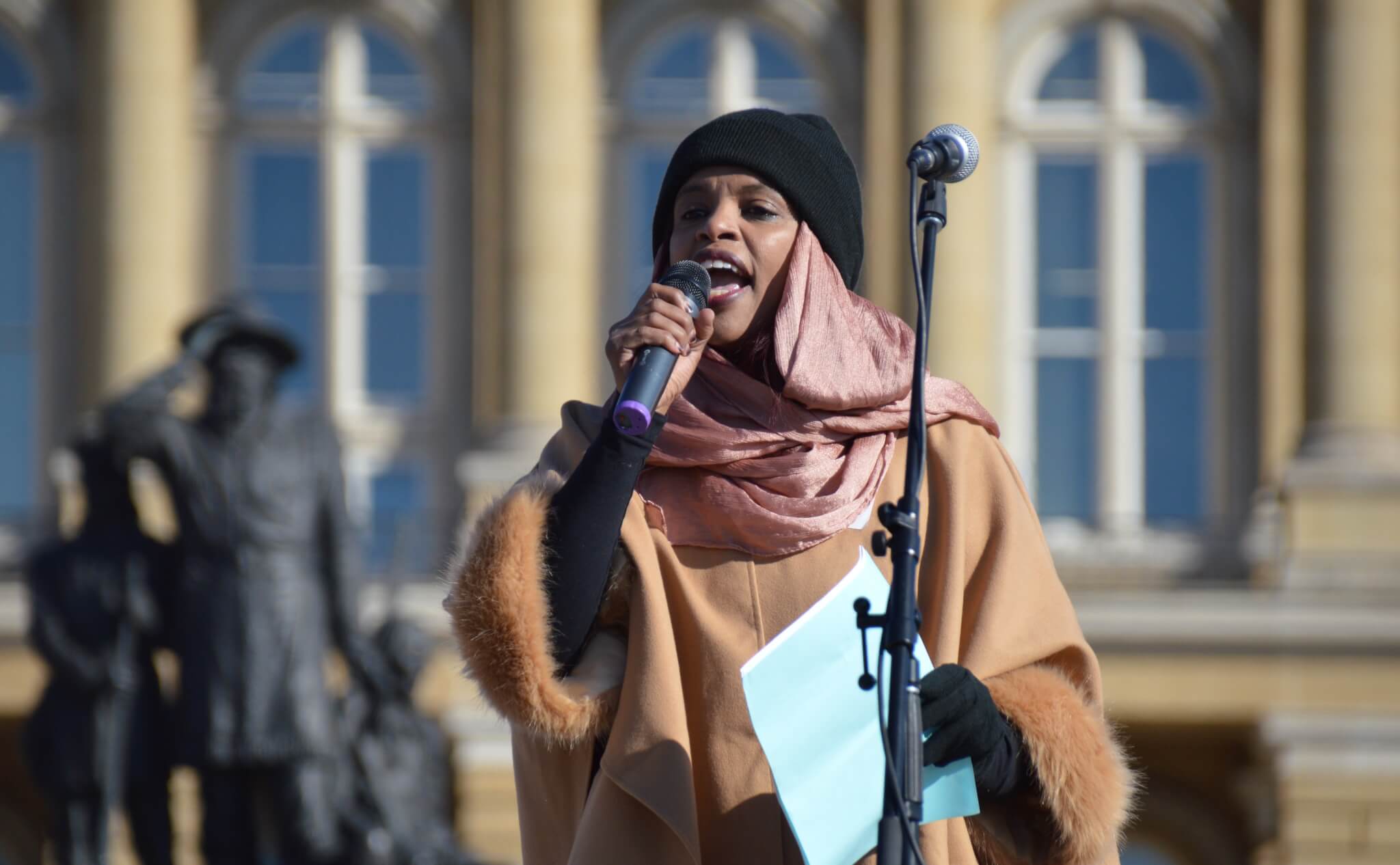 “I have been told that I am the first Sudanese-American to hold elected office in the whole United States,” she said. “But I am not going to be the last … We will stand up to the people who would force us to stay down. But this is only the beginning. People who were here a year ago left ready to get to work. Some of them got to work on getting elected. I am here today because last year this march reminded me that we are strong together.”

And State Representative Liz Bennett of Cedar Rapids had words of warning for the Republican politicians that many of the attendees were there to protest. 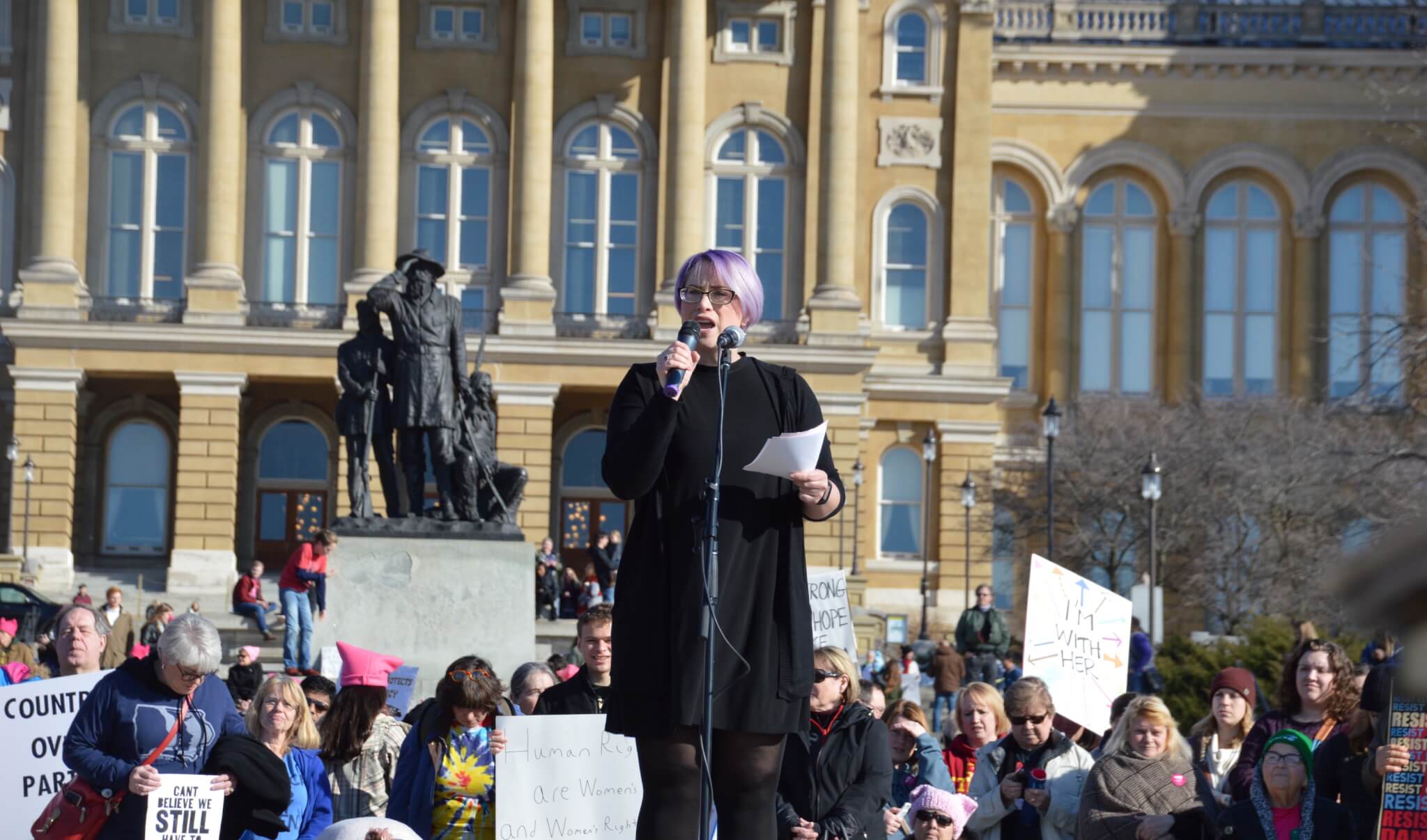 Many Democratic candidates running for office in 2018 were on hand for the event. Starting Line spotted gubernatorial candidates Andy McGuire, John Norris, Nate Boulton and Ross Wilburn. Charlotte Hubbell was there with friends for her husband Fred. Many campaigns had field staff on hand to talk with attendees, including Cathy Glasson’s. 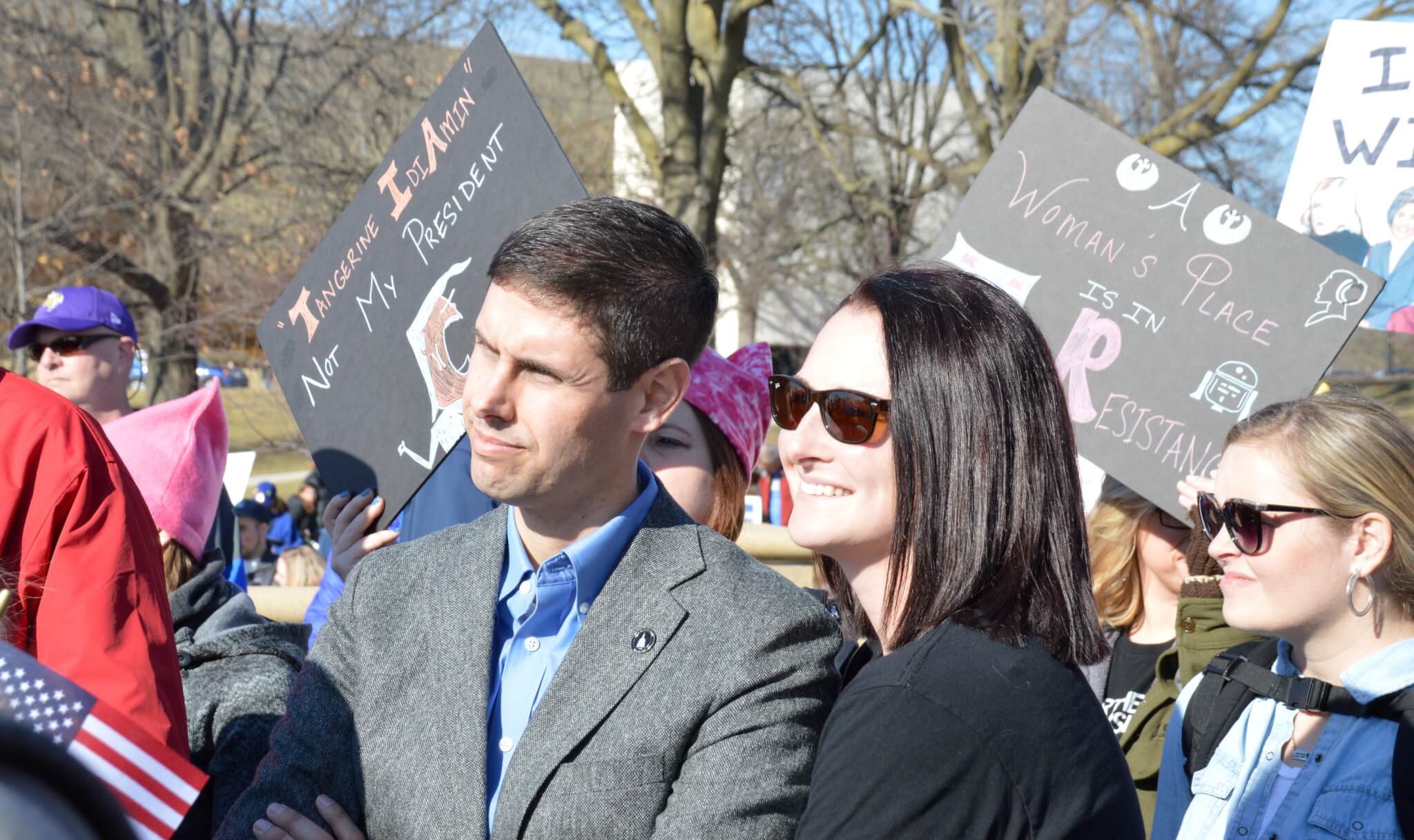 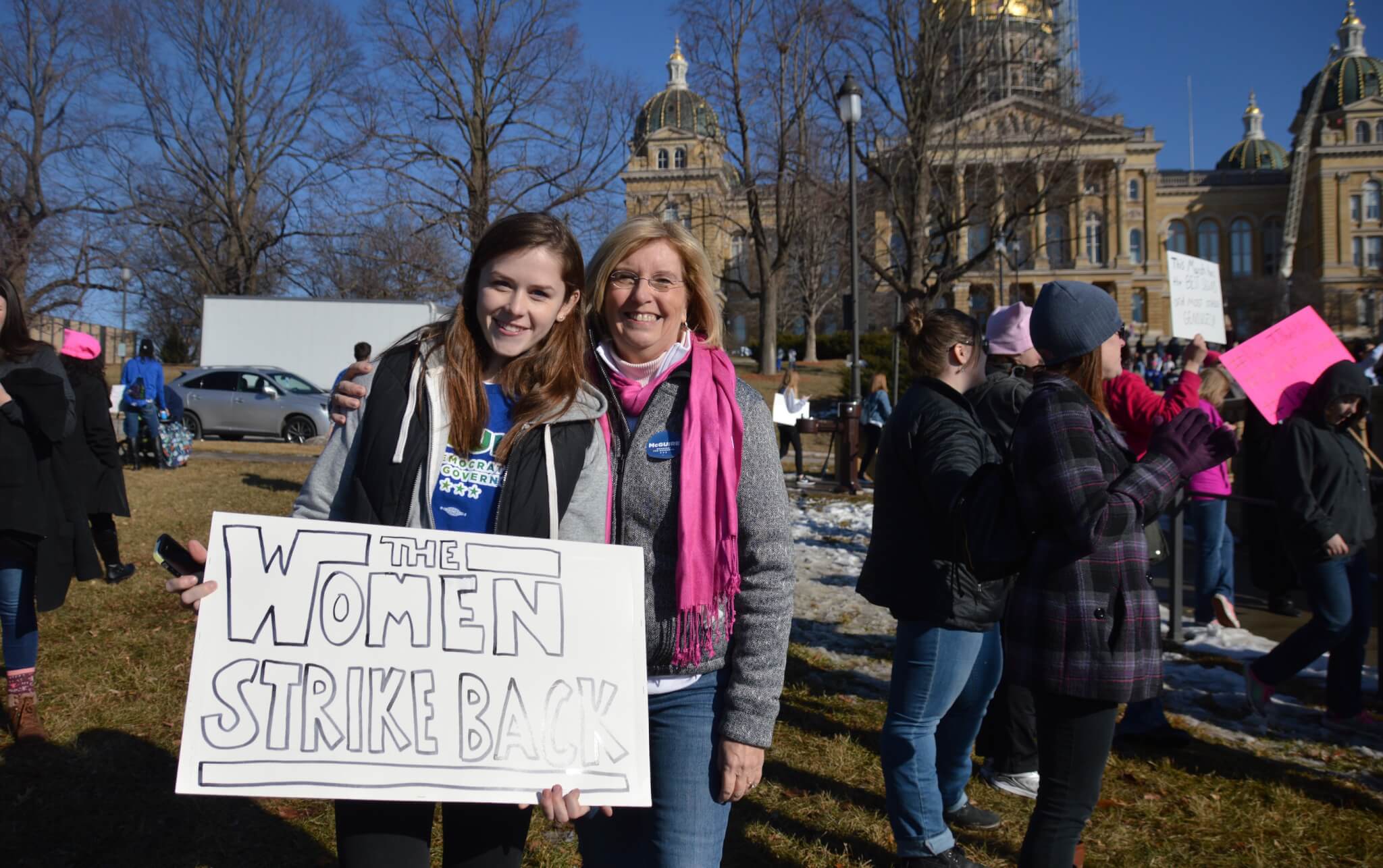 Third District candidates Cindy Axne, Theresa Greenfield, Eddie Mauro and Pete D’Alessandro were there. Secretary of State candidate Deidre DeJear and State Auditor candidate Rob Sand were on hand. There very well may have been others, it was just difficult to spot everyone in a crowd so large (drop us a line if you were). 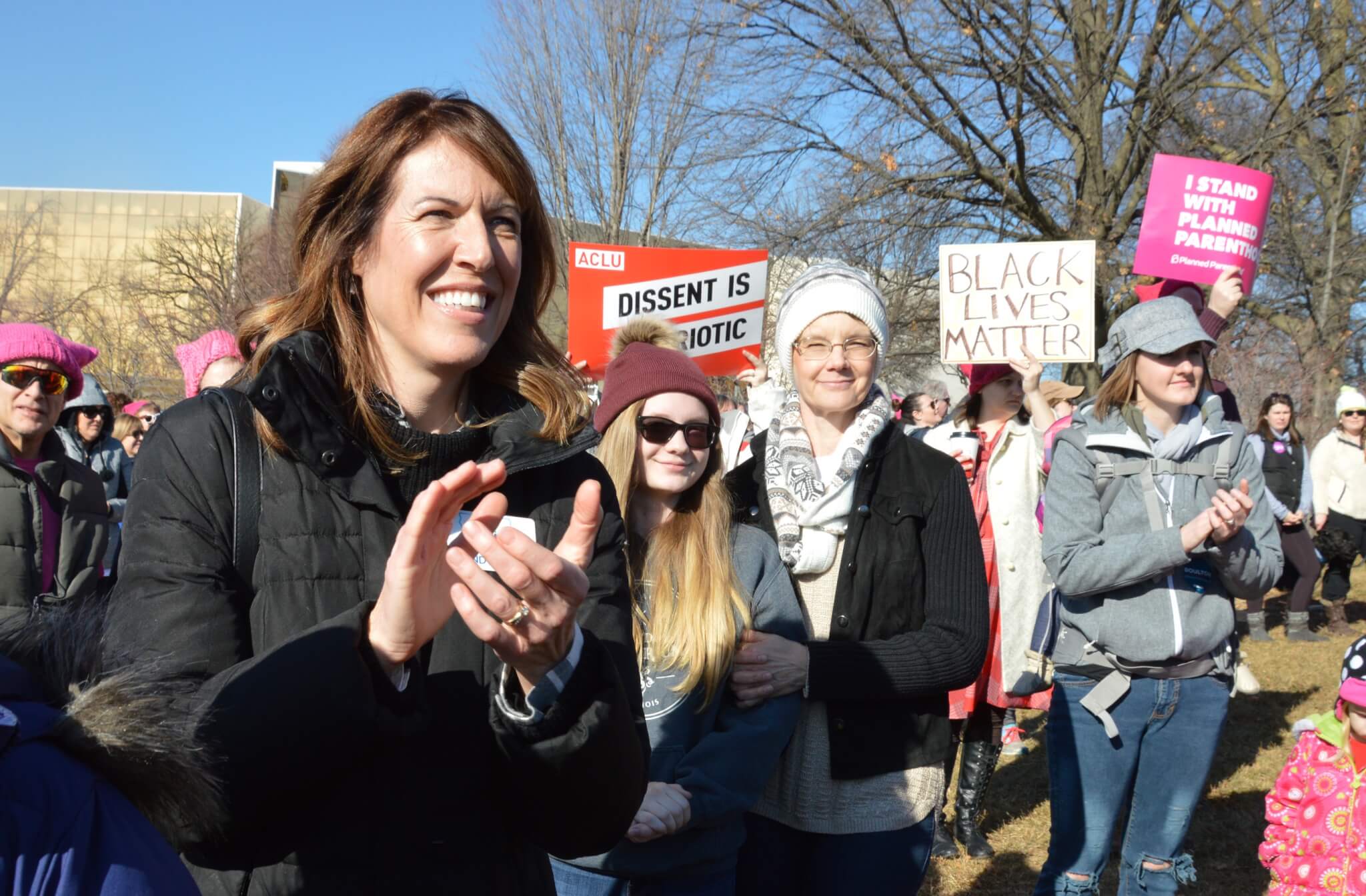 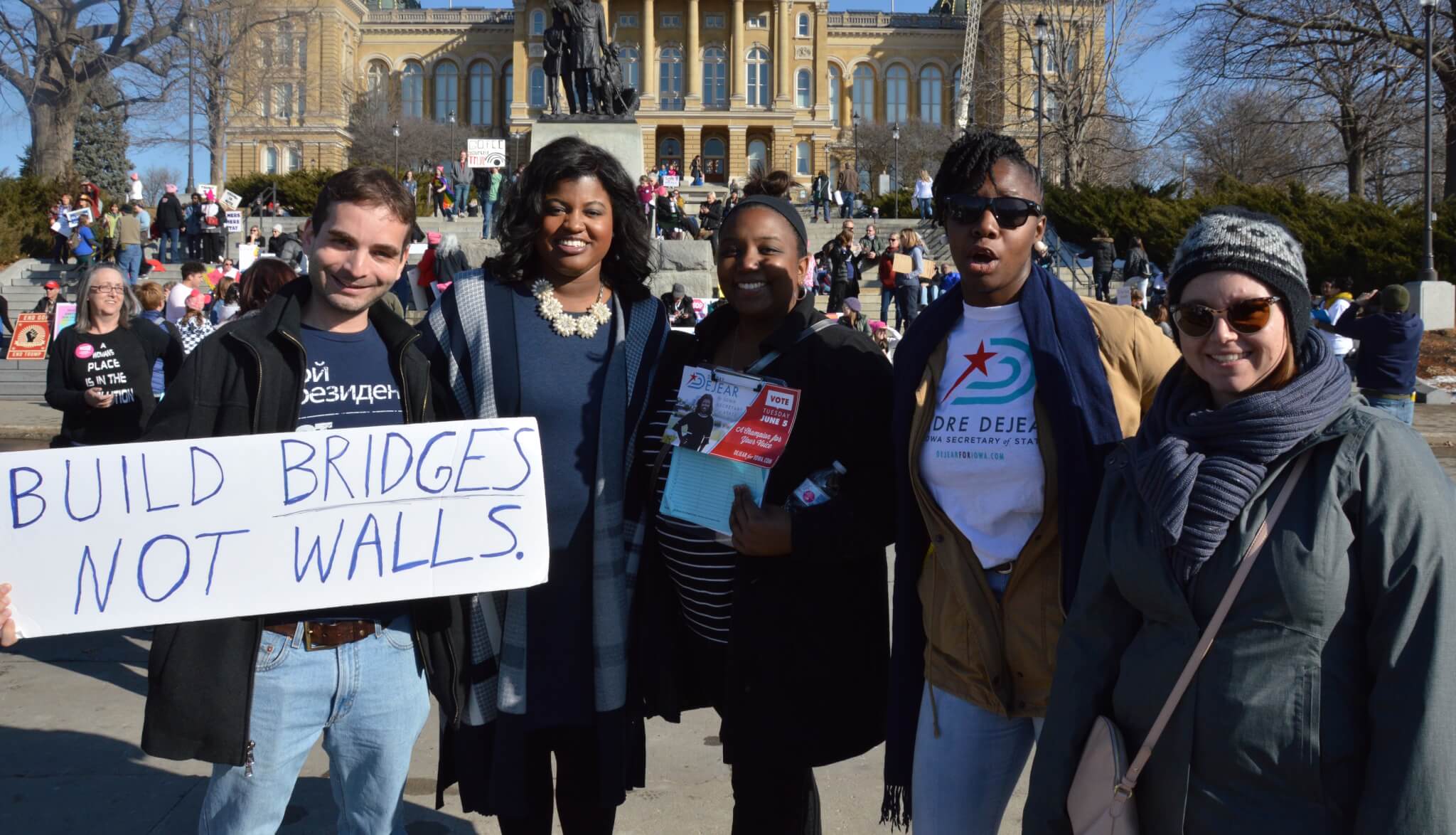 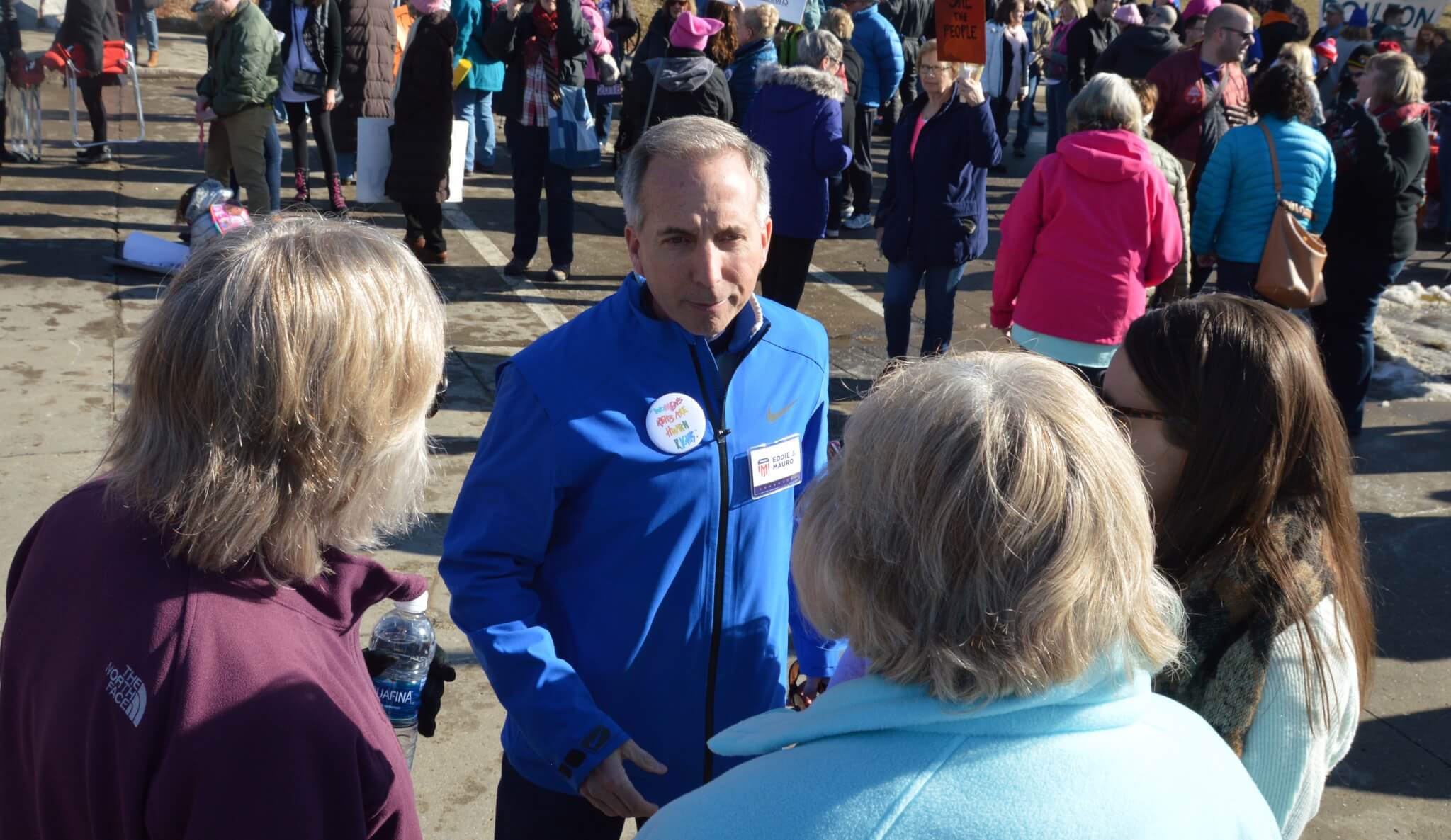 Theresa Greenfield had a particularly unique sign for the event. She appeared on the cover of Time Magazine this week with a group of women running for office. 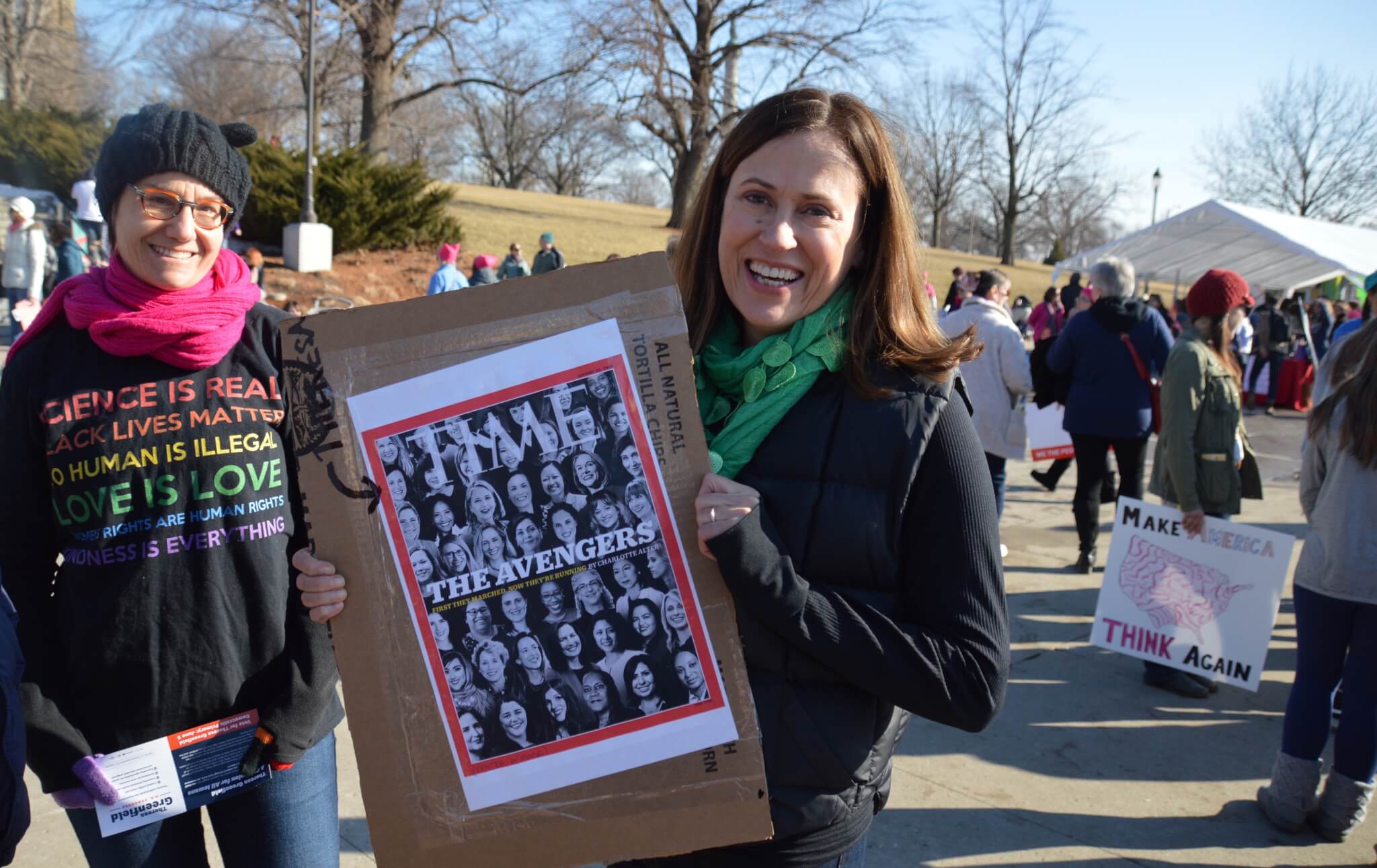 4th District candidate J.D. Scholten came down from Sioux City. He’s seen here with a group of students from Ames, standing in the back. 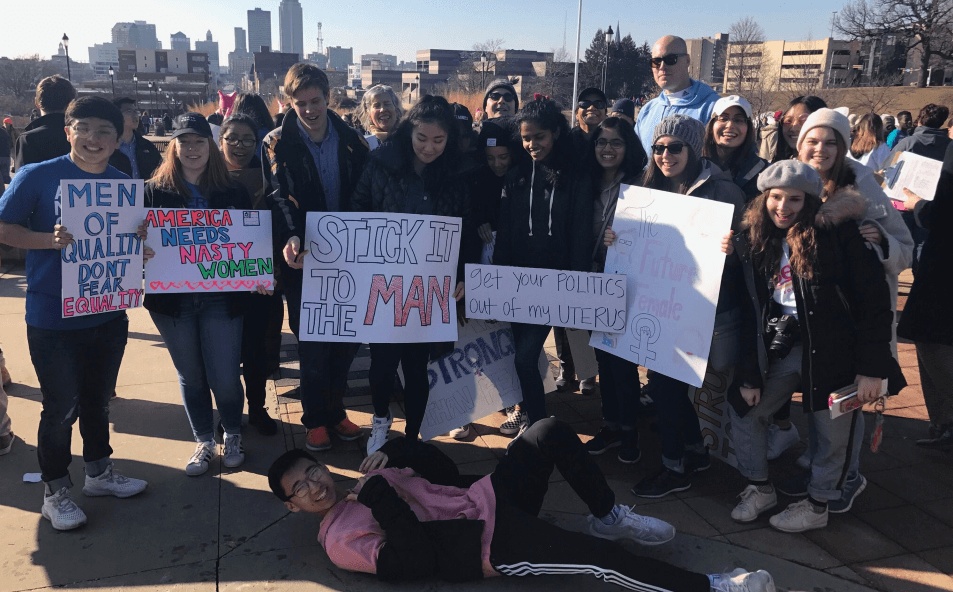 McGuire held a pre-event get-together at her campaign office a few blocks away and was joined by many of her friends and family members for the march. This week her campaign rolled out additional endorsements from well-known Iowa female activists and community leaders – over 70 women on the list added their names to McGuire’s candidacy.

“Andy has a particular knack for identifying and tackling problems,” Bonnie Campbell said of McGuire. “Her experience in the medical field no doubt has had a hand in how she handles challenges — head on. Andy is focused on getting results on healthcare and education.” 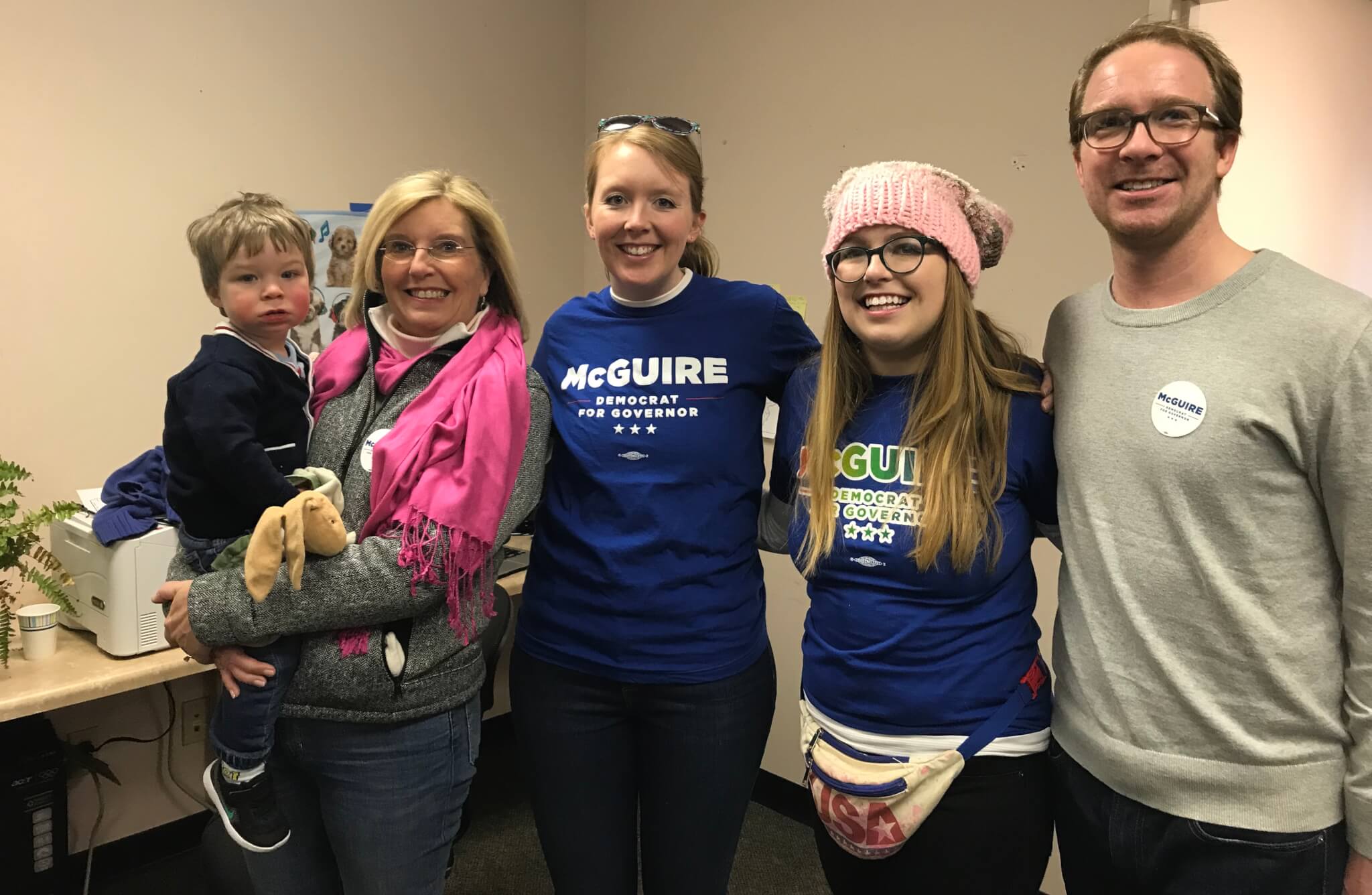 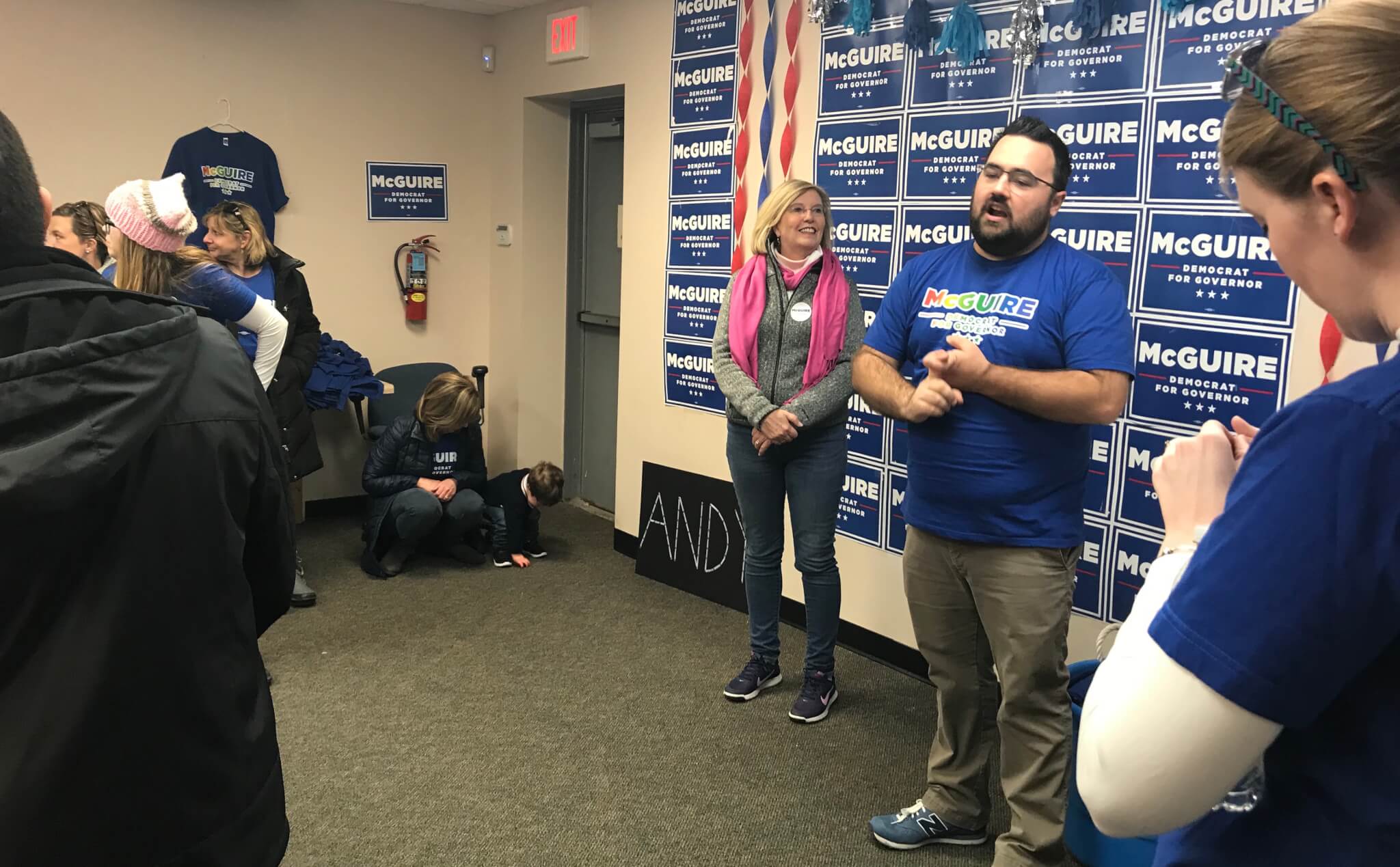 “As we celebrate the progress we’ve made since [2017], hundreds of first time candidates running for office and an empowered movement combating sexual misconduct, we are reminded of the fight still ahead, which is getting strong progressive candidates, like Fred, elected,” Gajewski said. “That’s what brought our team together, and what motivates us every day. We are excited to continue sharing Fred’s lifelong fight to expand a woman’s access to quality health care as Chair of Planned Parenthood, and build a strong coalition of voters committed to showing Iowa is a progressive place for all to succeed.”

Many attendees spoken to at the rally didn’t have a set candidate they were planning on supporing in the Democratic primary just yet, but they did know one thing.

“Anybody would be better than Kim Reynolds,” Amber Aplara-Carrier said.

“What I know is that we have to get Kim Reynolds out, because she’s dangerous,” added Rachel Prescott.

Here’s some additional photos from the day’s events: 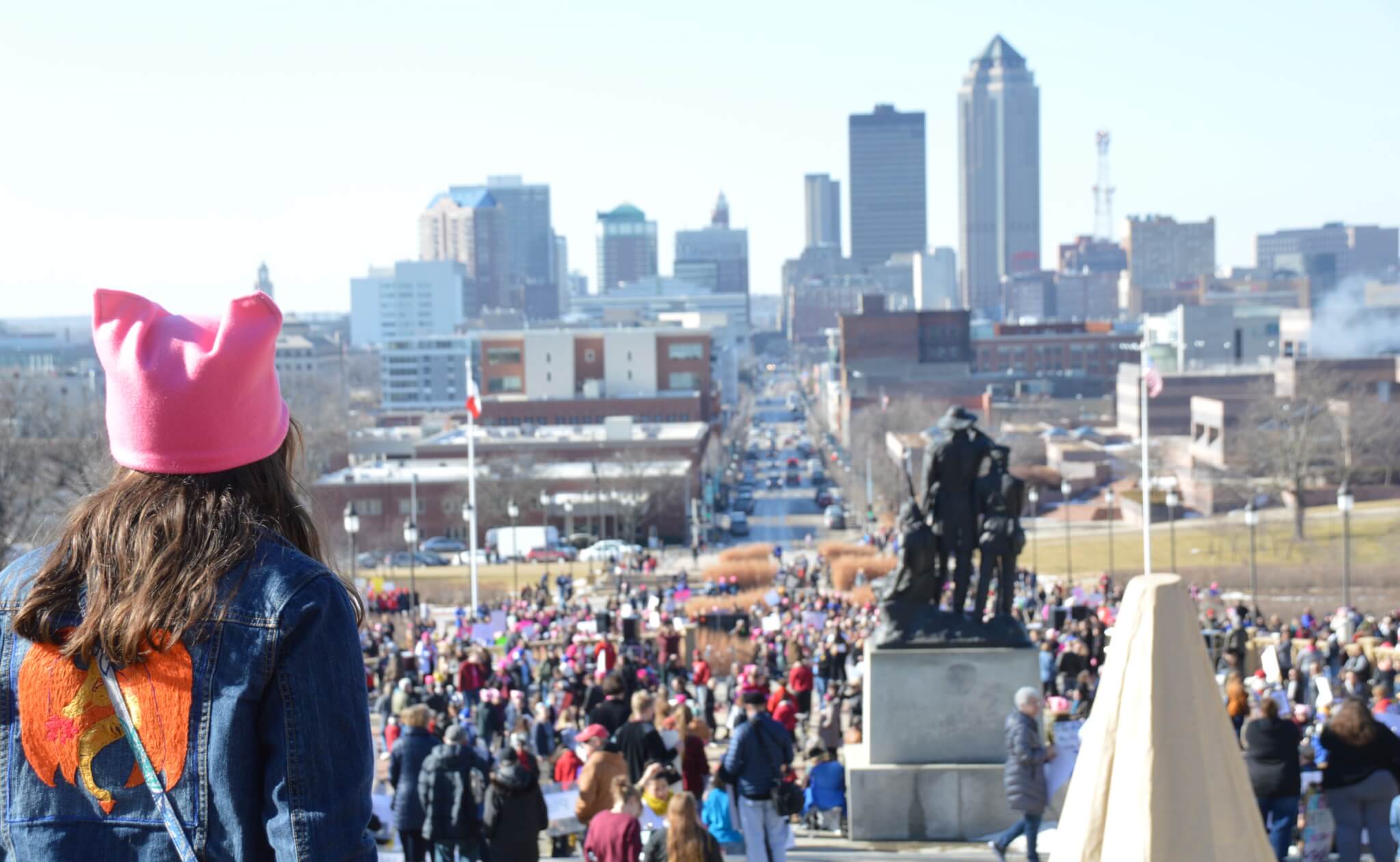 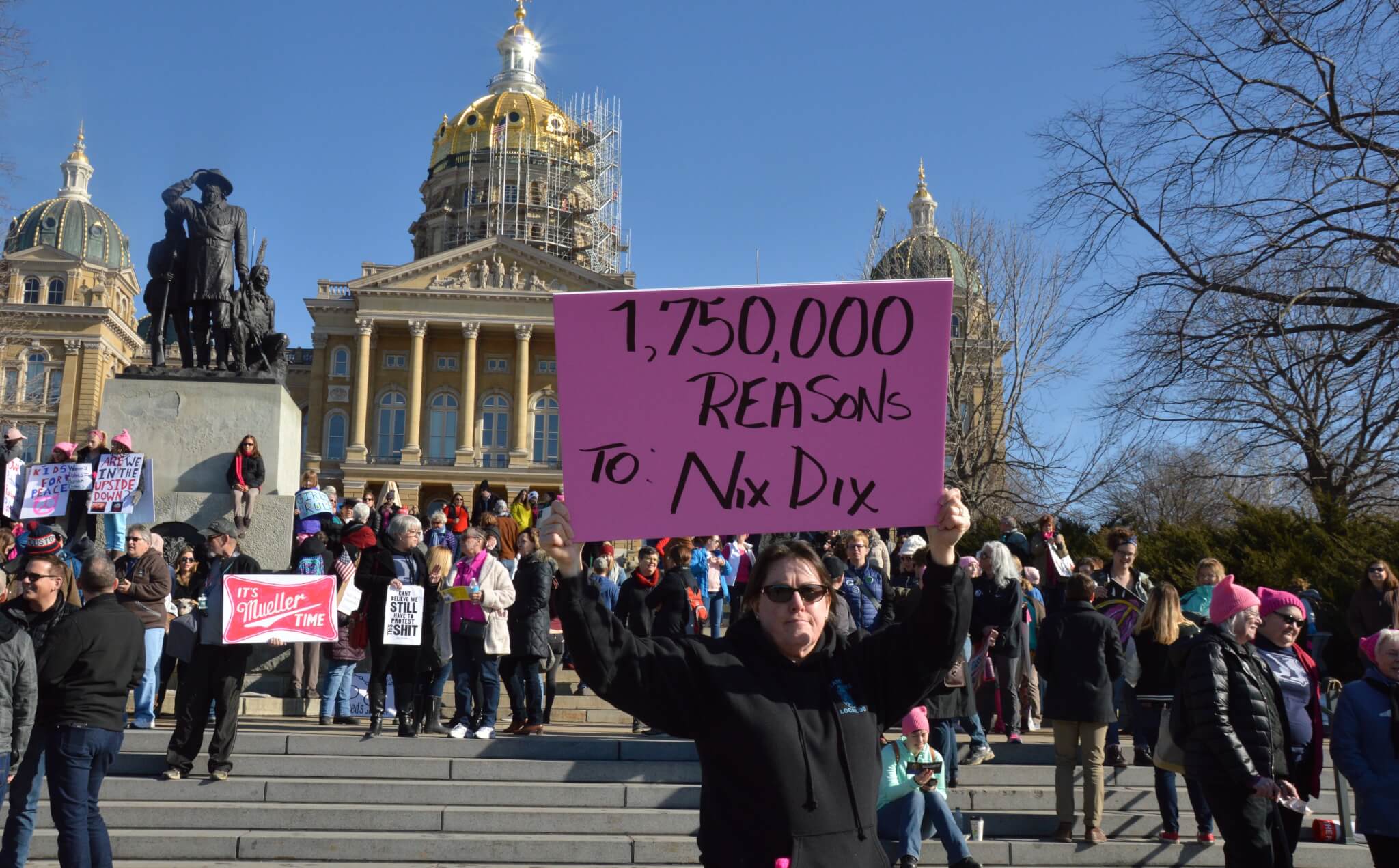 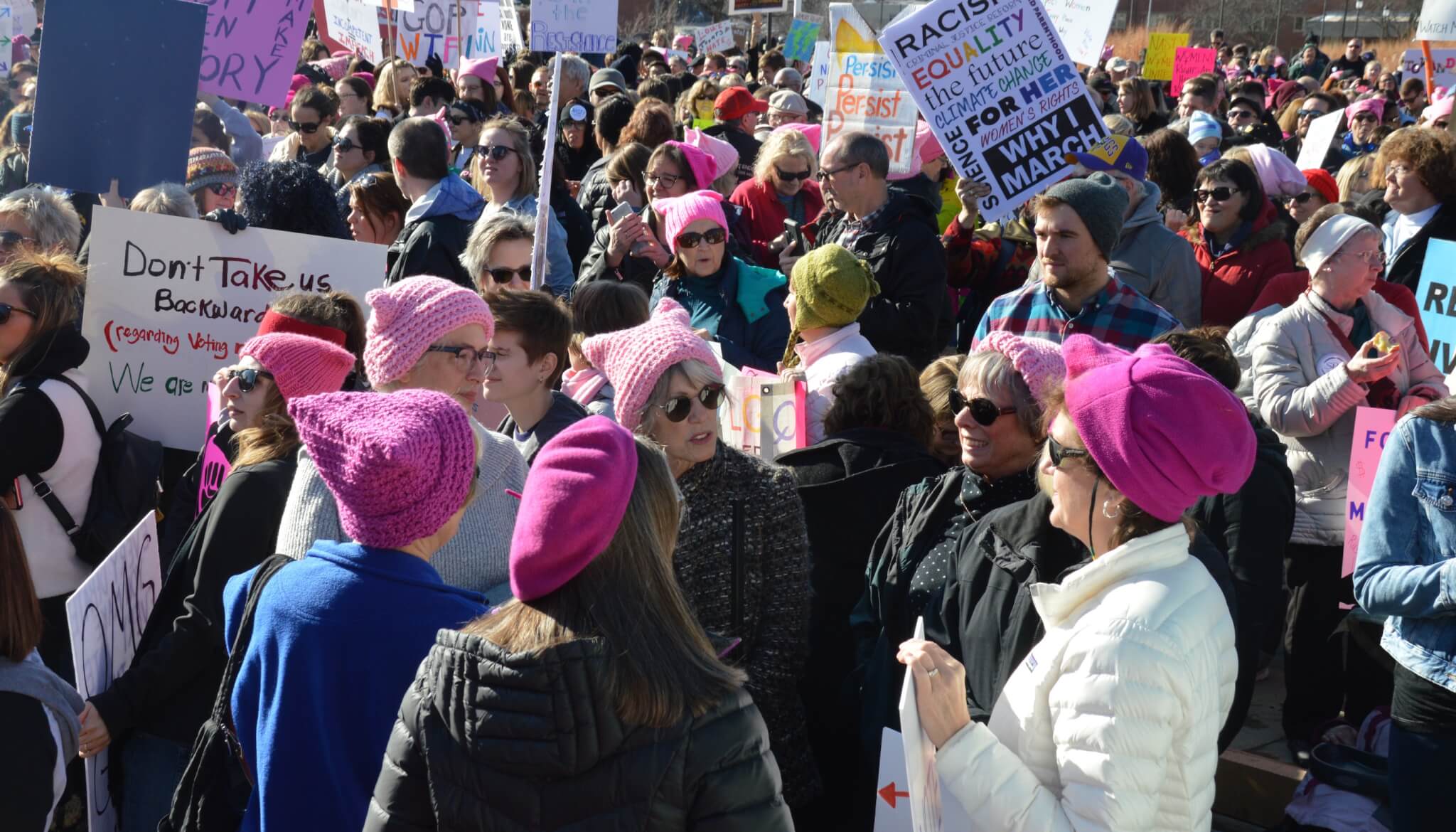 3 Comments on "Iowa Women Defiant At Women’s March: The Speeches, Sights And Signs"