There were 40 sacred items placed in that cornerstone as a reminder to future generations of their significance to the founding of the nation and the state of Iowa. Here are some of the items deposited in the Capitol time capsule: The United States Constitution, Declaration of Independence, President Washington’s farewell address, President Lincoln’s Emancipation proclamation, Holy Bible, Star Spangled Banner and an honor list of Iowa soldiers that served in the Civil war.

Number 11 on the list is especially significant in recognizing the crucial value that our forefathers placed on welcoming immigrants to Iowa. That item consists of five copies of a pamphlet entitled, “Iowa, The Home for Immigrants.” 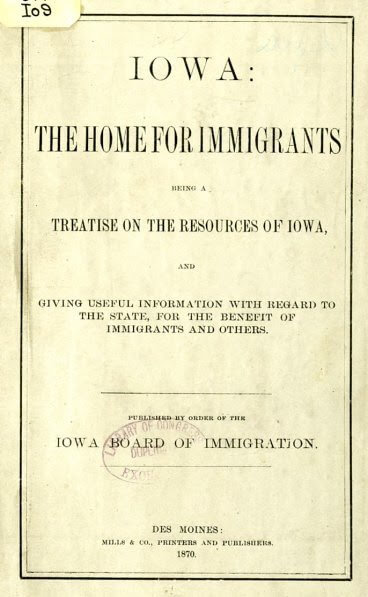 Copies of the pamphlet are each printed in different languages: English, German, Danish, Swedish and Dutch. Iowa’s forefathers honored Iowa’s immigrants by placing this pamphlet among some of our state and nations most sacred documents. In addition, they demonstrated their respect for the immigrant heritage of each by printing the pamphlet in their native languages.

In Governor Samuel Merrill’s ceremonial address at the laying of the 1871 cornerstone, he called out the immigrant contribution to Iowa’s growing population. He referenced the increasing number of immigrants populating the state since the establishment of the territory.

“We have made rapid progress, not only in population, but in all that makes a state great. Then we had a few immigrants from the East and Europe. Now, every year, more of them, perhaps more than the population of the day, come among us, and are scattered over our state, as permanent citizens,” said Merrill.

The pamphlet, Iowa, The Home for Immigrants, was written by the state of Iowa’s Board of Immigration. It was basically a welcoming guide used to greet immigrants coming to Iowa. The subheading reads, “Giving useful information in regard to the state of Iowa, for the benefit of immigrants and others.”

The Board of Immigration published the welcoming pamphlet in 1870. The Board could be thought of as today’s state economic development and state welcoming agency. The board consisted of the board president, then Governor Merrill, and a representative from each congressional district. Their stated purpose in printing this pamphlet was to persuade immigrants to come to Iowa and take up residence. In the forward to the pamphlet they offered to provide “resources and information as might prove useful to immigrants.”

It’s basically a 100 page sales pitch used to convince immigrants to come and take up residence in the state of Iowa. It attempted to answer nearly every conceivable question an immigrant might have about the state. It described in detail the weather, geography and geology. It explained the educational, religious and ethnic makeup of the state. It provided guides to homesteading, farming and opening businesses in the state.

In Burlington, which served as the eastern railroad gateway, they offered a temporary “Immigrant Home” to welcome incoming immigrants. The Board predicted the Burlington Immigrant Home would be remembered by the “immigrant wanderer” entering Iowa as an “oasis in the desert”

They described the Immigrant Home as a “gratuitous accommodation to immigrants… it is arranged in apartments for the various nationalities and meets a want that has been sorely felt by strangers in a strange land.”

That was the welcome that the Governor of Iowa offered to immigrants to Iowa in 1870. The Iowans of 1870 recognized that for the state of Iowa to flourish if desperately needed immigrants.

The Iowa immigrant need of 2018 isn’t so different than it was in 1870. Iowa’s small towns are dying, rural schools are closing and Iowa has a severe labor shortage. Iowa needs immigrants to grow our state, build new businesses and start young families.

However, the attitude offered to immigrants in 2018 is far different from the welcome they received in 1871. Today our Iowa Dreamers (DACA children) are left in political limbo and our immigrant communities live in fear of deportation. President Trump and Congressman King want to slam shut America’s doors to immigrants.

Iowans like Congressman King have forgotten that we were all once immigrants to America. They are betraying Iowa’s 1871 commitment to strangers in a strange land.  Perhaps as Governor Reynolds sits in her Capitol office with that cornerstone at her feet, she should read the pamphlet prepared by Governor Merrill and consider embracing our immigrant heritage by rejecting King and Trump.