Democrats face large primary fields for the 1st, 3rd and 4th congressional districts in Iowa, making it a little tough at times to figure out how things could shake out. But after months of candidate announcements, the races are starting to come into focus. At this point it seems like everyone who is going to get in is in, and yesterday’s 3rd quarter campaign finance filings gave the first full picture of where the candidates stack up money-wise.

Starting Line will be taking a look at each congressional district this week for the Democrats and Republicans running, analyzing the finance reports and relating what we hear from the district on the state of the races. For each we’ll show the general overview of the fundraising numbers, dig into each candidates’ reports and then summarize where the field stands at this point. First off: Iowa’s 1st District, one of the top swing seats in the country.

This was Finkenauer’s second filing of her campaign. She raised $156,015 in this year’s 2nd quarter, bringing the total for her candidacy so far to $308,120, along with $139,534 total spent. That burn rate is far less than the Republican incumbent she aims to take on next November, but it’s still a little high compared to some of the other Democratic candidates raising five and six-figures. There’s nothing that looks odd in her expenses, however, it’s just all the usual costs of a full campaign that are adding up (salary for a few staffers, consulting firm payments and office costs).

Finkenauer has run two successful races for the Iowa House in a heavily-Democratic district and started with some fundraising contacts from that, but has largely had to reach far beyond her usual Dubuque network for this race. Looking through her contributions list, her funds appear to come from four main sources: major Iowa Democratic donors, women’s rights groups, labor unions and the entertainment industry in California. 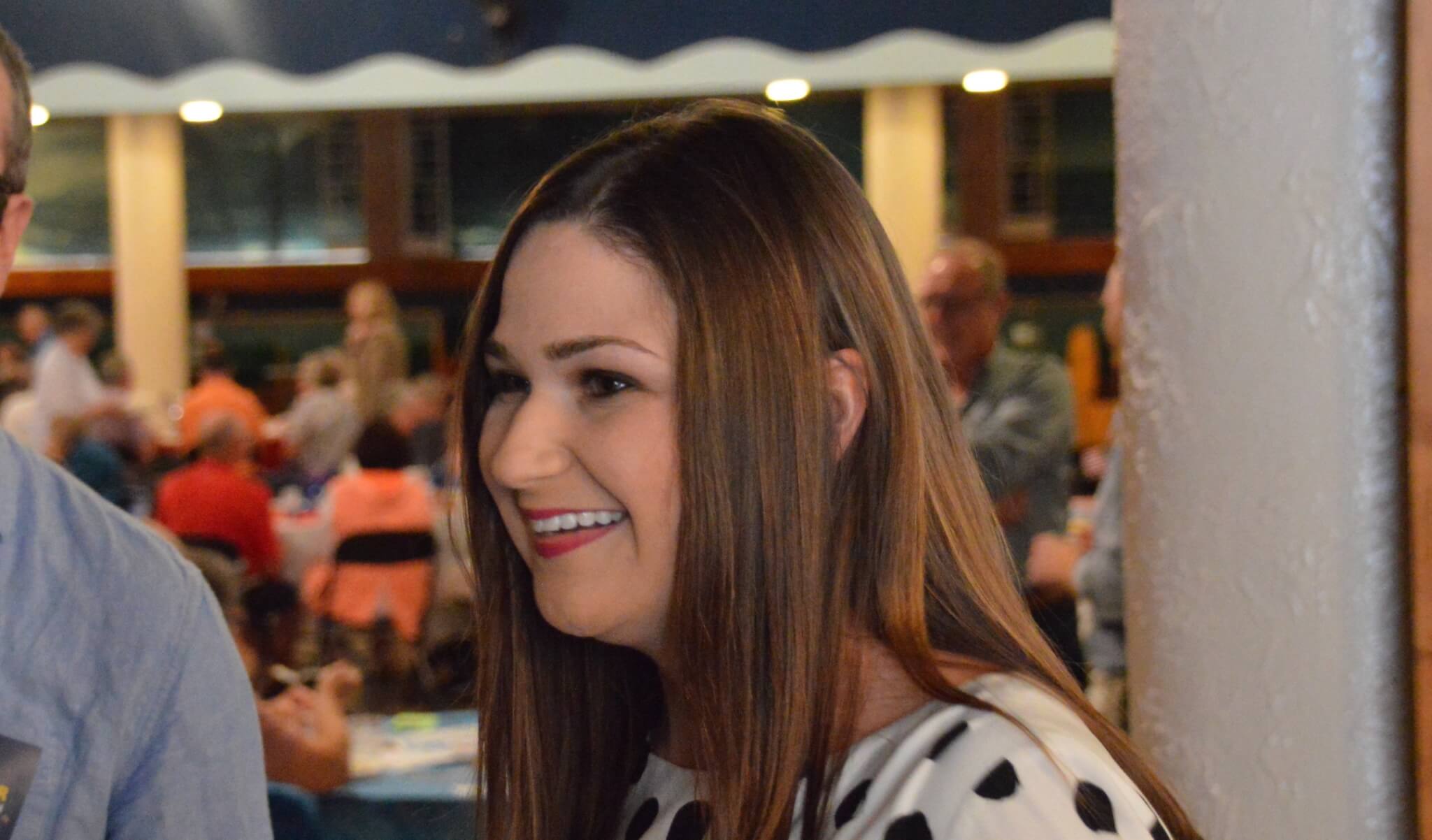 She was also endorsed by EMILY’s List early on, which helped bring in funds from around the country. About $4,000 was earmarked to Finkenauer through EMILY’s List, and she also got $1,000 from Progressive Choices PAC, $1,000 from the Fair Shot Campaign, $2,500 from the Tri-State Maxed Out Women PAC and $250 from a Women Under 40 organization.

EMILY’s List can also help open a lot of doors to other national donors, often providing helpful call lists to big Democratic donors who like to donate to key swing races. A big chunk of that for Finkenauer came from the Hollywood crowd, many of whom maxed out with $5,400 ($2,700 for the primary, $2,700 for the general). This part of her report is particularly fun to look through. Her donors included Rob and Michelle Reiner, Everyone Loves Raymond creator Phil Rosenthal, Forrest Gump writer Eric Wroth, famous Hollywood talent agent Ari Emanuel, 80’s actress Heather Thomas, Gladiator and Memoirs of a Geisha producer Doug Wick and Lion King film score composer Hans Zimmer. And, most importantly, The Simpsons creator Matt Groening and his wife Agustina both maxed out to Finkenauer. Barbara Streisand kicked in 750 bucks as well. Call time doesn’t sound so bad if you get to talk with folks like this on the phone.

Other noteworthy contributions include $1,500 from Al Franken’s PAC, $1,000 from April Delaney (wife of 2020 presidential candidate John Delaney) and $1,000 from Congressman Eric Swalwell’s PAC. She got a lot of $250 and $500 donations from Iowa donors, while most out-of-state contributions were in the $1,000 and higher range. Senator Pam Jochum, Representative Liz Bennett and former IDP Chair Sue Dvorsky gave to Finkenauer. She had $17,522.84 in unitemized donations, which is usually your smaller dollar donations that don’t reach the $200 required reporting amount.

This was Heckroth’s initial campaign finance report. He put up a solid total for his first quarter, coming in around $18,000 less than Finkenauer, but he did it in a much different way. His report is filled with donations between $50 and $200 (he fully listed nearly every single donation, regardless of whether it hit the $200 mark or not). His funds appeared to come from three sources: Iowa donors (especially in his Waverly and Cedar Falls home base), the Harkin-affiliated Washington, D.C. network and the New York finance scene.

There’s quite a few people in Heckroth’s list from D.C. law firms, congressional staffs, political consulting groups and federal agencies. I don’t know the extended Harkin network that well, but I do recognize a couple names from his former office with D.C.-area addresses. It’s probably safe to assume that most of those donors have some sort of connection to the large family of former Harkin staffers and their friends. 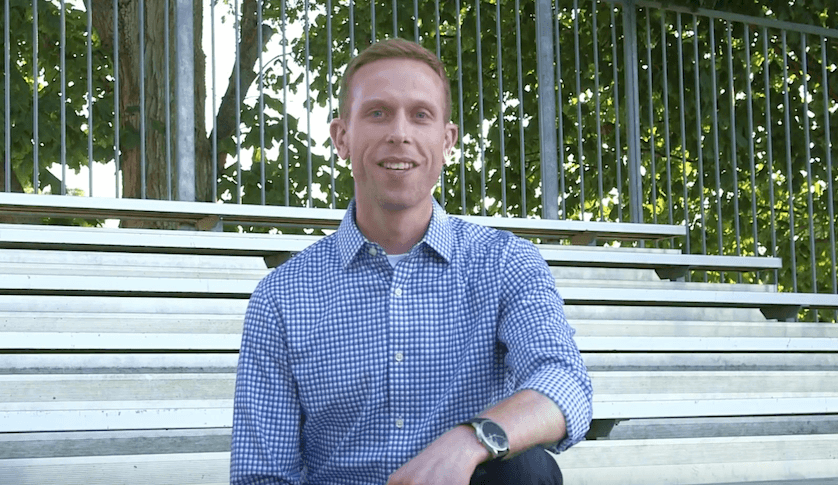 He also got checks from several current and former legislators, likely thanks in part to his father, former Senator Bill Heckroth. Former legislators John Beard, Tom Courtney, Jack Hatch, Dick Dearden and Ro Foege all showed up in Heckroth’s filing.

Heckroth had a much lower burn rate for his expenditures – nothing there really stood out, just your usual consulting firm fees, some printing, travel expenses and staffer salary.

This was Ramsey’s first filing. The candidate loaned his campaign $2,400, while most of his donations were unitemized (so mostly under $200). He had three donors aside from himself who gave over $200. He spent nearly everything he raised. 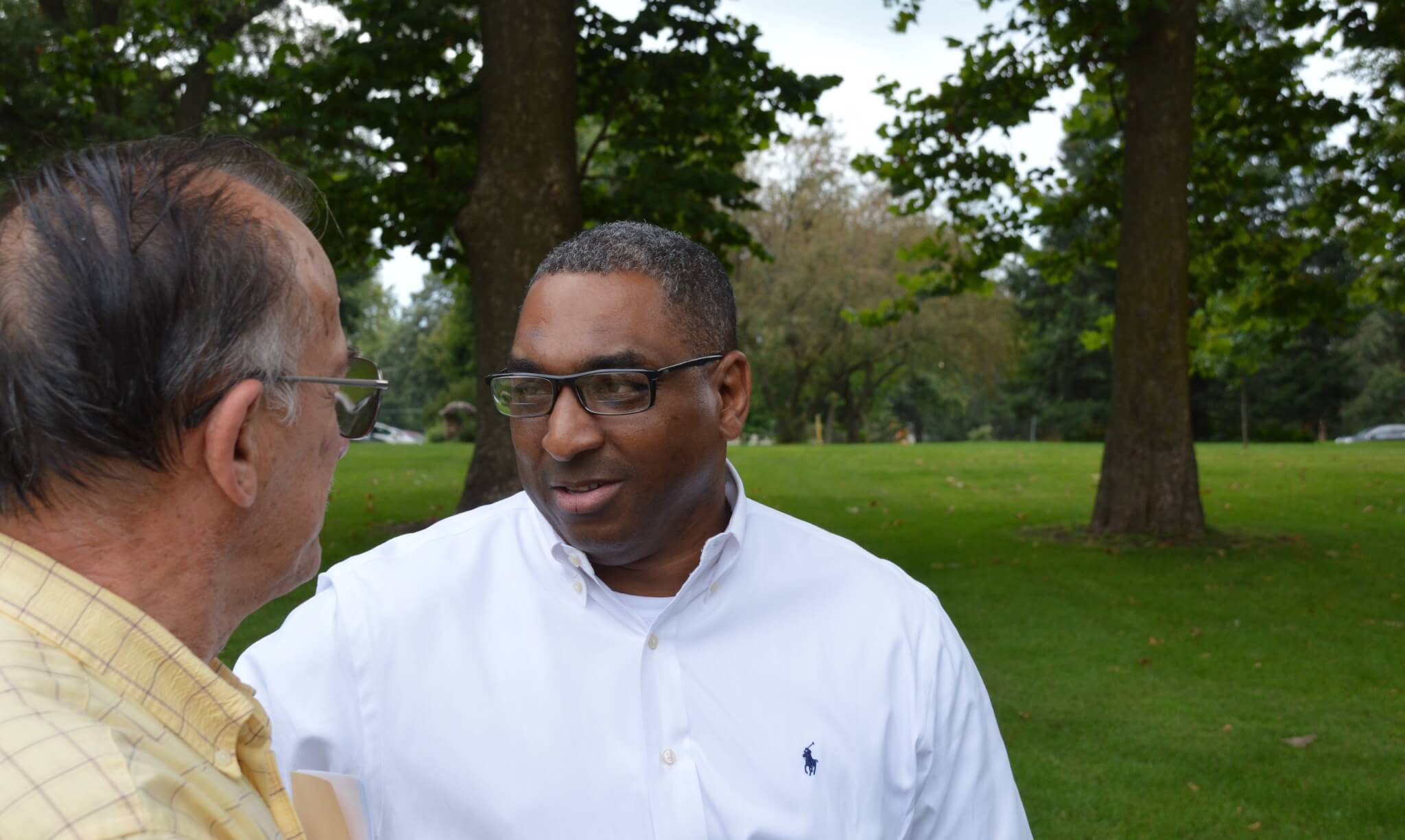 This was Rowe’s second filing. She reported $516 in donations, all unitemized, bringing her total money raised for her candidacy to $2,912. 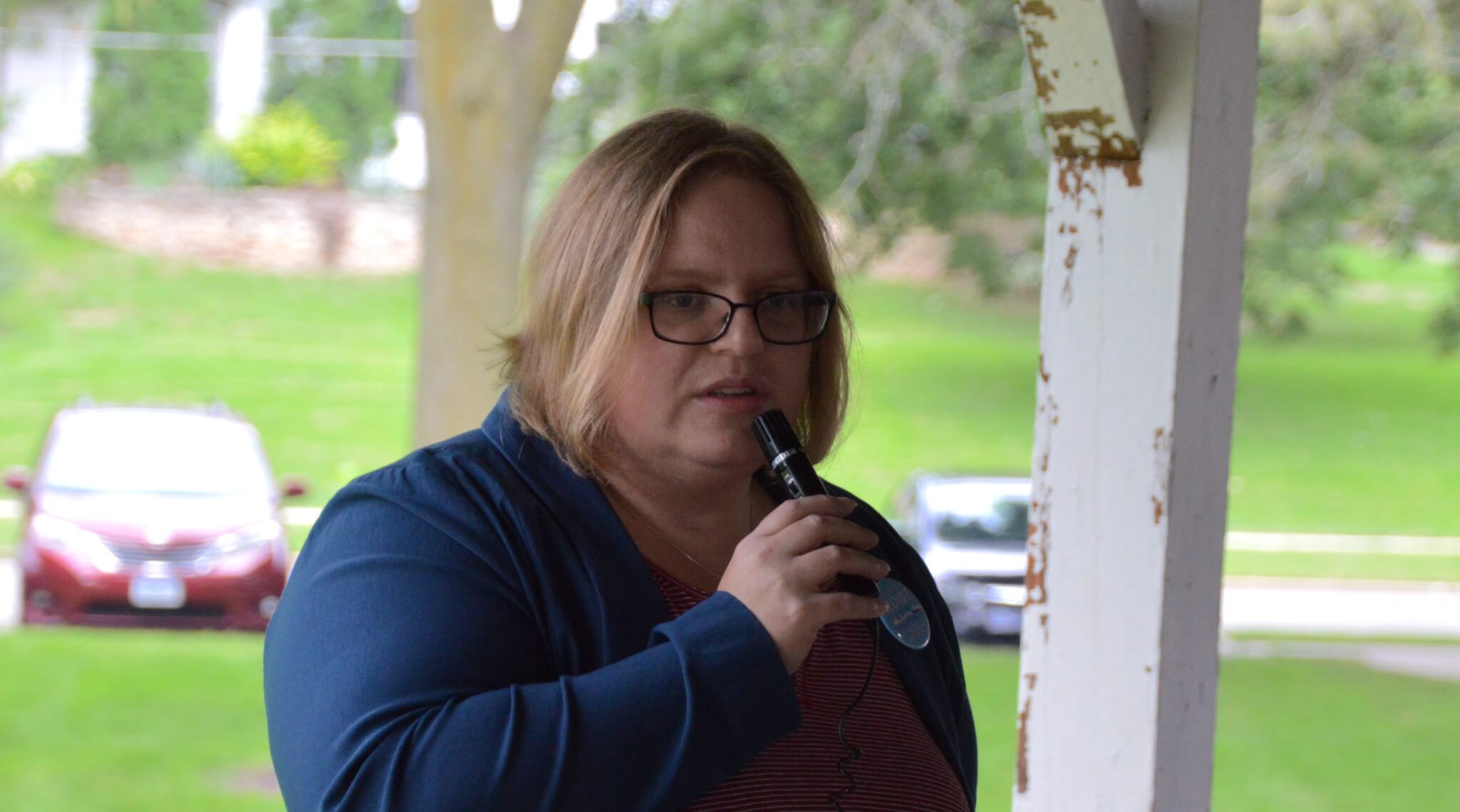 Finkenauer is largely seen in Iowa and national circles as the frontrunner in the primary. When a national Democratic PAC commissioned polls last week in Iowa’s 1st and 3rd districts, they tested Finkenauer against Blum in the 1st while testing “generic Democrat” against David Young in the 3rd. The poll found Finkenauer up two points on Blum, a worrying sign for the Republican incumbent in this highly-targeted race. The Cook Political Report just moved the 1st District into their “toss-up” ranking as well. Finkenauer is pitching herself to activists and donors as a good profile contrast to Blum – a young, 28-year-old woman from a working-class union family up against a multi-millionaire man.

There’s good reason to view Finkenauer as the candidate in the lead here. In the 1st District, a coalition of labor and female voters is a pretty potent advantage for a Democratic primary, which is what she appears to be putting together. To combat that you need to have a strong regional advantage in one of the district’s three major population centers. Heckroth will certainly dominate the mid-sized town of Waverly, but having recently moved back to Iowa, he doesn’t have as deep of ties to his new home of Cedar Falls as past candidates Monica Vernon did to Cedar Rapids or Pat Murphy did to Dubuque.

Still, Heckroth’s ability to almost keep pace with Finkenauer’s 3rd quarter filing shows he’ll have the funds to run a full campaign and compete seriously for the nomination. And given that some of Finkenauer’s biggest donors maxed out for the general, Heckroth is even closer to her on primary election dollars than the reports suggest. Heckroth is a first-time candidate contending with someone who has significant support from major forces within the party and is still keeping the cash-on-hand race relatively close in his first filing.

The gubernatorial race will suck up all the oxygen during next year’s primary, and sometimes one really great ad in a less-watched congressional race can catapult a candidate over the finish line, even if that person doesn’t have the most money. Heckroth could also take the same path to a win as Bruce Braley did back in the 2006 1st District primary, where Braley solidified his home base of Waterloo and then put together enough votes in the rural counties to offset the Linn and Dubuque County advantages of his opponents. Heckroth’s pitch to voters is that he’s a guy from rural Iowa who went to work for Tom Harkin and understands policy, so with a couple good ads that might be enough to get to victory next June.

On the fundraising front, we can expect to see Finkenauer put up even better numbers each quarter as the race gains more national attention and gets even more competitive in national rankings. By this time in the 2016 cycle, Monica Vernon had raised close to $630,000 for her bid, though she had been in the race longer than Finkenauer at this point and had run once before. In the 2014 cycle, Pat Murphy had brought in $227,907 by his 2013 3rd quarter filing. So, Finkenauer is running ahead of Murphy’s performance, but doesn’t have as big a financial advantage as Vernon once did just yet.

The good news for Heckroth is that all these $50, $100 and $200 donors can probably give several more times between now and the primary. The bad news is that it just takes a really long time for donations of those sizes to add up without a nice helping of $2,700 checks. Heckroth must have put in a big effort on the phones to get this sheer amount of donors in his first quarter, but will need to find some bigger donors to help pad his donations from his personal network.

Ramsey and Rowe don’t look to be major factors in the primary. Rowe is planning a fundraising push for later on in the campaign [updated], and there’s still a chance Ramsey could put something together. Both have particularly good personal stories that would resonate well in local election contests, and they’ve been working the district hard in traveling to events. But 32,255 people voted in the 2016 Democratic primary for the 1st District, and you simply can’t reach enough of those people by driving around to party events without also sending out mail and buying TV ads. It is highly unlikely either will pull enough votes to keep Finkenauer or Heckroth from getting to the 35% necessary in the primary to avoid a convention.

The Freedom Caucus congressman won’t have any primary challengers. Blum has gotten a little better at fundraising, bringing in more individual contributions these days, but a good chunk of his donations still came in through PACs. Nothing much to dissect on this side until later.