When State Senator Nate Boulton received the endorsement of Steelworkers Local 310 at their union hall earlier this year, he was in a familiar place. Boulton and his family travelled from their home in Columbus Junction to the Des Moines labor headquarters for Christmas parties a few times when he was in elementary school. But growing up in a union family, he also saw first-hand the tough fights that organized labor went through, attending strikes and rallies. Those experiences shaped his life and his current bid to be Iowa’s next governor.

Much of what Nate learned came from his father, Randy Boulton, a lifetime union worker and Steelworkers official, who is now an integral part of the campaign.

“I just wanted my kids to have a good education, go out and have good lives,” Randy said when asked by Radio Iowa at the endorsement event in May about his work. “People who work in these facilities just want to work for dignity. Just to make a decent wage so they can have a decent vacation, a decent house.”

Randy worked at the rubber plant in Muscatine as he worked his way through college, and got involved with the United Rubber Workers (which would merge with the Steelworkers in the 90’s) after graduating. There he went from president of the local union to district representative to international representative. He brought Nate along to lots of union events and political gatherings.

“Growing up in that environment, I saw just how important it was to support working families and understand how meaningful it is,” Nate said. “These aren’t just imaginary jobs. These are real jobs held by real people who are great contributors to communities … We had good health insurance and benefits because of a union contract.”

But the Boultons also experienced the more trying times that union workers go through. A lengthy strike at Titan Tire and Firestone plants in the early 90’s when Nate was a young teenager tested the local workers. Nate attended many rallies and picket lines with his father.

“One of the things I remember was the food drive that was happening for workers that were surviving off of a dwindling striker fund payment,” Nate recalled. “The community came together around those workers and brought bread and other food to help them get through a very trying time as they were standing up together for their quality of life … Both those strikes were long strikes and very trying. They stood together and they’re proud to still be union facilities today.”

Many of those lessons stuck with Nate as he worked his way through college and law school. Right after graduation he went to a workers’ rights law firm, specializing in worker compensation claims when people were unlawfully fired or injured on the job.

“He had a lot of honors in college and I wasn’t sure what direction he was going to go,” Randy said. “I know he had offers to make a lot more money to go work for some… businesses, let’s put it that way. And he chose to go for working Iowans. I didn’t have any influence, I didn’t tell him, but I was very proud when he made that choice to go that direction. Kids have to make their own decisions.”

Nate saw it as a clear choice.

“It was the perfect fit for me to go right into a workers’ rights practice from day one,” he explained. “I would not find rewarding a profession that helped me maximize a profit for someone at the expense of individual workers, being on the other side of that table. My calling in the legal profession was to be an advocate for people who were in the most trying times in their lives.”

That experience prepared Nate rather well for this year during his first term in the Iowa Senate. Although a freshman senator from Des Moines’ East Side, Nate was given the lead on collective bargaining and worker compensation legislation. Those high-profile fights ended up catapulting Nate into the statewide political spotlight and set him in a position to make a strong run for governor.

Randy was glued to his computer screen during the all-night, 26-hour marathon debate in the Iowa Senate on collective bargaining, watching his son giving impassioned speeches and trying to add amendment after amendment to the bill.

“It was hard to go to bed, wanting to hear what they have to say or what next amendment Nate was going to offer,” Randy said. “Basically, they won the arguments, not the vote … [The Republicans] just weren’t listening. If you noticed, that whole time the debate was going on, none of them got up and defended what they were for. Nate kept asking the questions, putting the questions forward, wanting to know why would they do this. No answers. Silence. So I got to listen to the Democrats … It was impressive to watch, just didn’t have the votes.”

When Nate announced his run for governor, endorsements from a multitude of labor unions came rolling in, with Randy helping with outreach efforts behind the scenes. And the entire Boulton campaign has become a large family affair. Randy and Nate’s wife, Andrea, join him often on the campaign trail and also speak on his behalf at events, while other family members pitch in from their home base in Louisa County, which has become a bit of a stronghold for the senator’s candidacy. 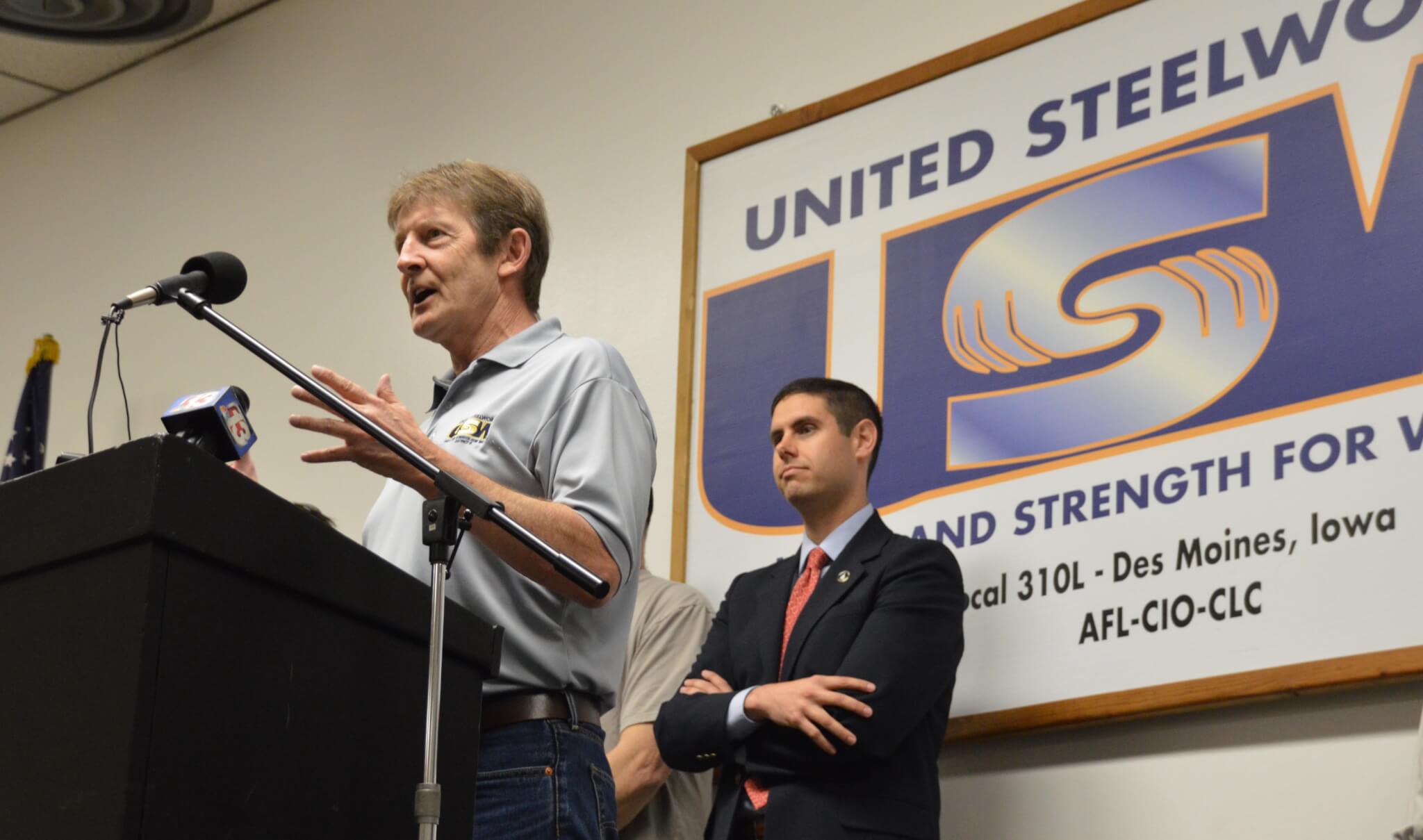 “We’re probably one of the very few Democratic campaigns who have made more than a couple visits to Columbus Junction,” Nate joked (he announced his candidacy in his hometown).

Local Democratic activists in Louisa County – many of whom are old friends and neighbors of the Boultons – are putting together a large fundraising effort next month for Nate. Meanwhile, his mother and step-father have been helping Nate at Democratic events throughout Southeast Iowa. And his grandfather, the former chief union steward at a packing plant that Nate talks about often on the campaign trail, made a float for his grandson in the Wapello parade.

But it’s not all work. This last Saturday Nate and Randy were at an event in Mt. Pleasant. Since the Hawkeye football team had a night game that day, the two were able to get some good use out of Randy’s season tickets and attended the game together.

“It was nice to spend a little time off the campaign trail with him too,” Nate said.

Randy has been happy and eager to do as much as he can for his son, and he also had some advice after his own decades of experience in Iowa politics.

“Have a thick skin,” Randy suggested. “It’s a long race, we all know he’s a marathon runner, but it is. You’ve got to be ready to have some long hours, long days, long months. It’s bad enough for me when I do shift duties at some of my locals. I can’t imagine doing this week in, week out. Takes up your weekends. My boy, I just want him to have a good life and that’s what his choice is. I’m happy to support him.”