Janesville school board member Cathy Myers hopes to knock off Speaker Paul Ryan in Wisconsin’s 1st District next year, but her story in politics began in Iowa. And just like any good Iowa politics story, it involves Jimmy Carter, motorcycles, national conventions, a legislative legend and some corn detasseling.

Cathy Myers is the daughter of Dick Myers, who was once the Democratic minority leader in the Iowa House and an all-around institution in Iowa politics. She grew up with her family in Iowa City and Coralville, where her parents ran the Hawkeye Truck Stop at the Coralville exit off I-80. They would add a diner and a Harley Davidson dealership onto it, and that’s where Myers spent most of her childhood.

“I had a really great upbringing,” Myers told Starting Line. “Our lives centered a lot on the truck stop, because when you have a small business everything kind of gravitates toward that work. All of us kids worked there at some point.”

The day after she turned 10, her father asked why she didn’t have a job yet, so she was soon picking up trash, painting islands and doing general “gopher duty” around the truck stop.

Mixed in with that life was local politics. Dick Myers served at nearly every level of government, including on the Coralville city council, as mayor of the town, as a Johnson County supervisor and eventually in the Iowa House. He served in the Carter Administration and ran for Congress as well. His campaigns stretched from the early 1970s to his five terms in the House from 1993 to 2003. Cathy often helped, who began doing door-to-door canvassing at age 10. 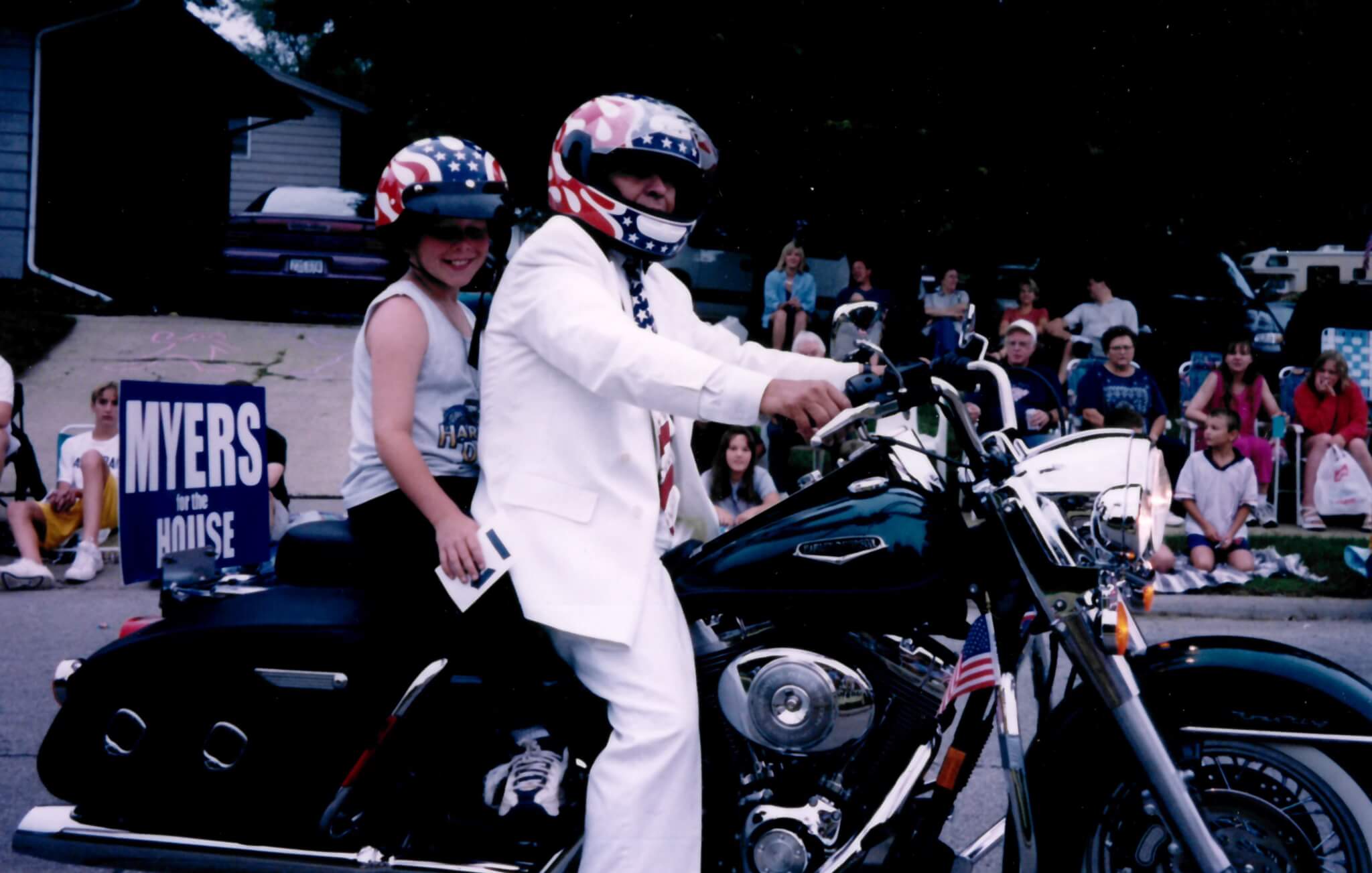 “We were always pretty active, if not in his campaigns, we talked at the dinner table every night about service and politics,” she said.

Dick Myers was an early supporter of Jimmy Carter in the 1976 Iowa Caucus. Carter held a campaign event at their house, and Dick became a delegate for Carter at the national convention. The family turned it into a vacation, and Cathy got a guest pass to go on the convention floor for a day.

She was 13 then, and decided she would run to be a delegate herself for the next convention in 1980. That year she made phone calls, sent out literature, practiced speeches and shook hands and introduced herself at the Iowa Democratic state convention, getting herself elected as an alternate to the national convention in New York City, which began two days after her 18th birthday. 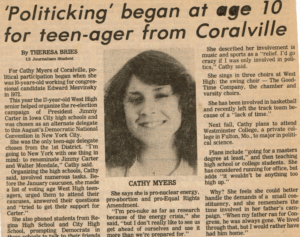 “It was fascinating,” she said of the raucous Carter/Kennedy convention. “I worked three jobs that summer to pay for it. I detasseled corn, I was a camp counselor and worked at the truck stop. I took a greyhound bus in because it was cheaper, paid for my own hotel … Even though it was a contentious convention, I felt like I was part of something important.”

Cathy Myers would eventually go into a career in public education, teaching high school English for 23 years. She made her way to Wisconsin, and has lived in the Southeast Wisconsin congressional district since 2009.

“I was raised in Iowa, but Iowa and Wisconsin are so similar in the kind of people you have,” she explained. “I really feel at home in Wisconsin because it shares a lot of the same values that Iowa has.”

There she successfully ran for the Janesville School Board in 2013 after Governor Scott Walker’s Act 10 changes upended collective bargaining rights in Wisconsin.

“School boards and administrations suddenly felt like they didn’t have to talk to their [teacher] representative groups,” she noted. “I felt if they weren’t going to talk to their teachers, they could talk to this teacher. We were able to stem the flow of teachers leaving by making sure we protected their benefits as much as possible. But we also worked with them, and we started talking to each other to try to solve some of our problems like insurance. The atmosphere has been changing back as slowly and surely as we can to a pre-Act 10 kind of atmosphere, but it wasn’t easy.”

This year she has her sights set on a bigger challenge: running against the top Republican in the U.S. House, Paul Ryan. She faces a Democratic primary that includes Randy Bryce. But she’s hopeful in her chances to defeat Ryan if she’s the nominee, as she’s seen a shift in voter sentiment locally ever since Donald Trump’s election.

“I think there’s a fair amount of buyer’s remorse in Wisconsin’s 1st Congressional District regarding President Trump,” she said. “And that’s filtering to Paul Ryan, because people don’t see him standing up to Trump. They don’t see him exhibiting any kind of leadership. People have come to realize that he’s not the wonder boy they always thought he was before. His approval rating is below 50% in the district.”

Myers will be getting some help from her parents and all their old Iowa friends in her campaign. She was returning to Iowa City this weekend for her mother’s 80th birthday, and her parents are putting together a fundraiser for her this Saturday evening.

“I’m also going to be seeing a lot of people I knew from my childhood, people who were on all these different campaigns with us,” she said.

She’s also gotten plenty of advice from her father on campaign strategies, but most of them boil down simply to working hard, not taking anything for granted and being yourself in your campaign.

Myers’ fundraiser in Iowa City will be this Saturday after the Hawkeye game, from 4:00 to 6:30 at 112 S. Dodge Street in Iowa City. Her campaign website is here.