If voters in Southeast Iowa are searching for a spiritual successor to Curt Hansen’s brand of respectful, determined political representation, there seems to be none better suited to the role than Democratic nominee Phil Miller. A Fairfield veterinarian and school board member, Miller is running to fill Hansen’s seat in the state legislature for House District 82, which covers, Jefferson, Davis and Van Buren counties.

“Curt seemed like he put politics aside as much as possible, and that’s the way I look at myself,” Miller told Starting Line this week. “That’s what we need in Des Moines: legislators who can work together. Here’s the problem, how do we solve it?”

When Hansen unexpectedly passed away in June, a special election was quickly called by Governor Kim Reynolds to fill the seat, scheduled for August 8th. After Hansen’s funeral, Miller was on the phone with another Democratic activist in town to discuss what would happen next – he joked that by the end of the call it was decided that he would be the one running.

While Republicans held a five-way special nominating convention that Davis County farmer Travis Harris ended up winning, Miller was the only one to run at the Democratic convention. Libertarian candidate Josh Miller and Constitution Party Edward Hee will also be on the ballot.

The district contains a relatively even split among registered Democrats and registered Republicans, but this is a part of the state that swung big in Donald Trump’s favor. Trump beat Clinton by 22 points in House District 82, but there’s optimism that local Democratic candidates with deep roots to the community can still win in the area.

Miller himself had known Hansen since 1975 when Miller and his wife Connie came to town. And just like nearly everyone else in Fairfield, their family got to know the Hansens through school and church.

“In a community like this everyone knows everyone, especially back then,” Miller explained. “We had four kids that grew up and went to Fairfield High School, and they all had him for Drivers Ed. They have family pets that I’ve taken care of. And they’re members of the same church that we are.” 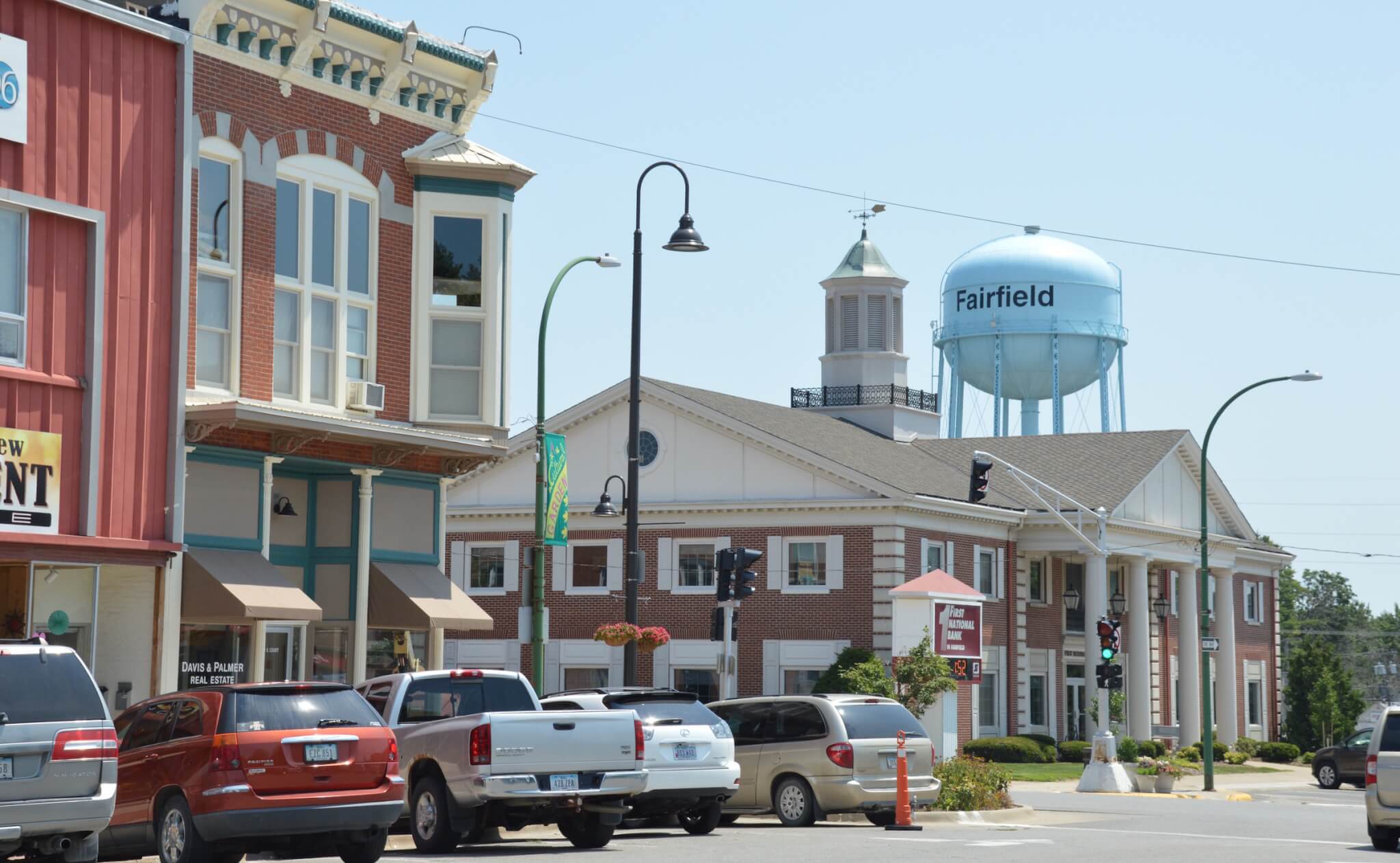 But they became particularly close when Miller first began serving on the local school board four years ago as the two discussed education policy ideas. During the legislative session, Hansen would stop by Miller’s office about once a week to chat about what was going on at the Statehouse.

Despite the Southeast Iowa district trending Republican in recent years, Hansen continually won – first in a 2009 special, then in the difficult years of 2010 and 2014. There wasn’t any big secret to Hansen’s success; he simply was very well-liked in the community, worked hard and avoided nasty partisanship.

“Curt just was himself,” Miller said. “The people who knew Curt liked him, so they voted for him. So my mission is just to make sure I get out and meet people. Because I know if they meet me and visit, if they don’t already know me, I think they would vote for me. I’m one of us. One of them. I’ve lived here my life with my wife and my kids and my grandkids … I’m all for people coming together. I’m for teamwork.”

Miller’s background is similar to Hansen’s in many ways. Just as Hansen got to know nearly every family in Jefferson County by teaching decades of high school students how to drive, Miller has built relationships through taking care of people’s pets and farm animals.

“As a large and small animal veterinarian, I get to see lots of good folks in the community,” Miller said.

That’s offered him plenty of opportunities over the years to have conversations with local residents over issues that come up often at the Statehouse.

“I get to interact with a lot of farmers, and we talk about things,” he noted. “I learn how the farmers I work for, that are maybe small livestock farms, they’re concerned about the environment. They’re concerned about soil conservation. They’re learning and going all-in on cover crops. That’s something that’s taken off at the grassroots level.”

“Is that a pun?” Miller added with a smile. “Grassroots cover crop?”

Miller explained that sometimes those issues become extremely partisan in Des Moines, but things like sustainable agriculture, and work that the Leopold Center does, is happening on the ground in rural Iowa without all the political rhetoric.

But his biggest passion – just like Hansen – is education. Four years ago a seat came open on the Fairfield school board, and Miller was encouraged to run for it. He eventually agreed and won the seat.

“From years of attending our church … after a good sermon you’re told that after you receive all this good message, you’re supposed to give back,” he recalled. “And whenever I decide to do these things and working with other people, it’s just so energizing.”

From that position he’s seen the real-life negative impacts of the underfunding of education that the Republican-controlled legislature has forced upon local districts. They’ve struggled with cuts, and Miller talked about having to make many tough decisions. One rural school had to be consolidated. The Fairfield high school now only offers half as many foreign language courses as it used to. And they now only have one full-time mechanic to service their school busses – a big problem for a rural district.

“We spend 800 to 900 dollars per student just to get them to the door of the school,” Miller said, adding that the school districts for Jefferson, Davis and Van Buren counties are some of the geographically largest in the state. 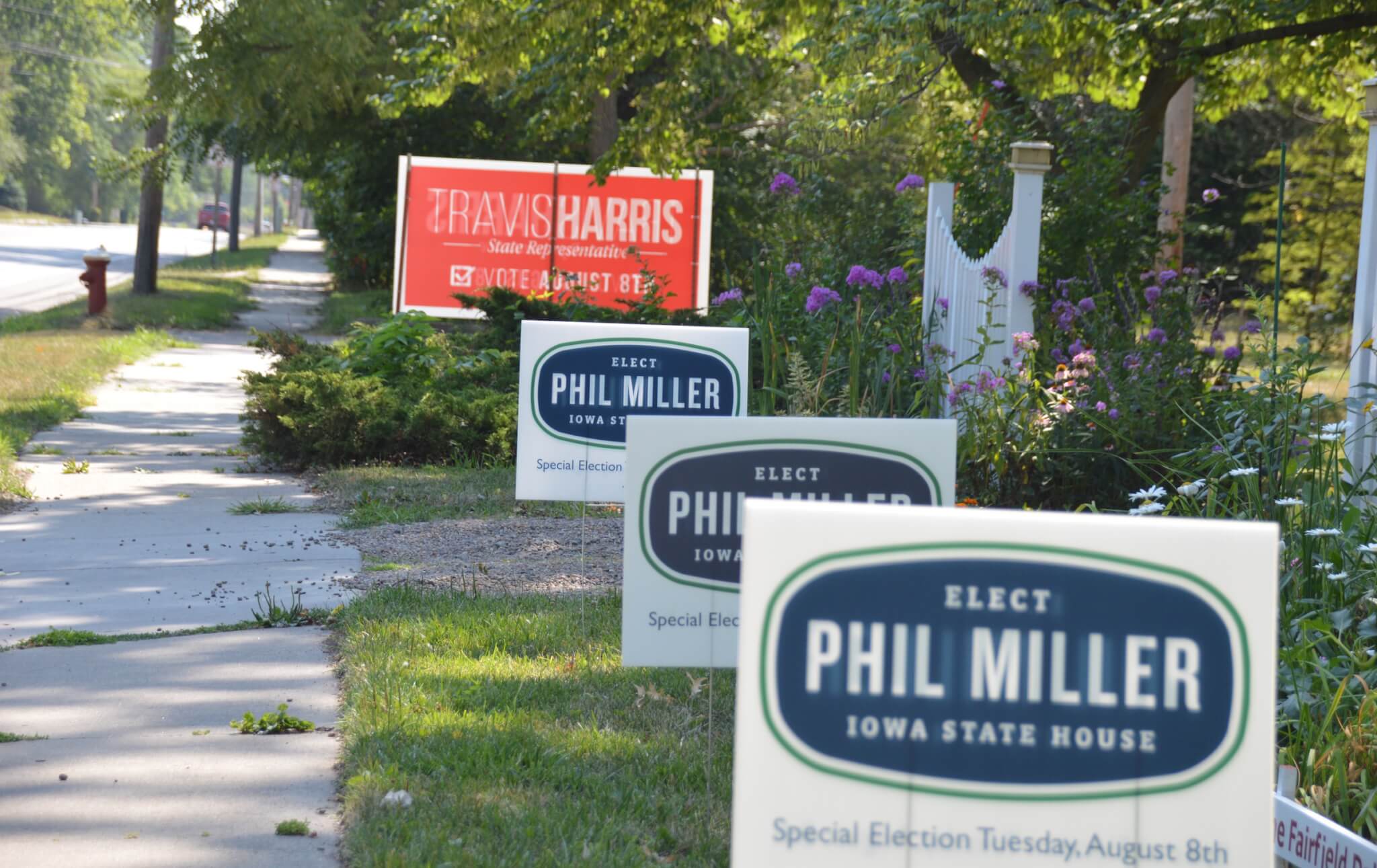 Although it’s been Republicans who have pushed for less education funding over the years, the GOP candidate in this race is running ads on funding support for public schools. The irony isn’t lost on Miller.

“I know what the facts are,” Miller stated. “Since I’ve been on the school board, there isn’t much new money coming to public schools. It’s just not happening. Also, the collective bargaining laws have been taken away. Also, worker’s compensation insurance has been weakened. Those are all things that have direct impact on getting teachers in front of kids. For one side to say that they’re supporting when all these things have happened while they’ve been in control is, quite frankly – I’ll be generous here – I don’t understand it.”

Aside from education, Miller is hearing a lot from voters as he knocks doors about the state’s Medicaid situation.

“Medicaid takes care of a lot of folks in District 82,” he said. “We have poverty here. About 50% of our students are free and reduced lunch. Where do you get the money to pay for health insurance, or just pay the doctor bills?”

There’s also a lot of concern about safe drinking water and a decent minimum wage.

“I’m an employer, I have 20 employees that I sign paychecks for every two weeks,” Miller said. “The minimum wage, I don’t know who actually pays that, but that’s just not enough money. We need to bring that up to the 21st Century.”

Miller has only had a couple weeks in which to campaign in the hurry-up special election. Party staff and volunteers have helped collect absentee ballots for the August 8th election, and are looking for more help. If he’s successful, it’ll be at least one sign that local candidates with community connections and issue-focused campaigns can still win in Iowa’s overly-partisan atmosphere.