Time and again this legislative session, Republicans passed legislation that supposedly polls very poorly with Iowa voters. And yet most political pundits predict that Kim Reynolds and the GOP ticket holds the upper hand heading into the 2018 election. A victory then by the new Reynolds and Adam Gregg team would solidify Republicans’ electoral stranglehold on the Hawkeye state where they control both U.S. Senate seats, three of four congressional districts and five of seven statewide offices.

So why have Republicans been so successful here the last four campaign cycles, despite Iowa’s swing state reputation (former reputation after 2016, perhaps)?

The answer is obviously many reasons, from incumbency to financial advantages to national Republican wave elections. But one key factor that Democrats don’t always appreciate enough is how Republican candidates so effectively present themselves as “regular Iowans” who are relatable to voters. Their electoral successes have resulted much more from their ability to appear to voters as the neighbor-down-the-street rather than a political leader with a clear, conservative policy agenda.

This strategy was on full display the past two weeks during Reynolds’ inauguration, Gregg’s announcement as her lt. governor and Joni Ernst’s Roast And Ride. Newly-elected leaders or new candidates often engage in some biographical myth-making, and Reynolds and Gregg’s were heavy on the “authentic Iowa” narrative.

“I’m a rural Iowa girl who grew up in a small community, was able to run for county office, to serve as a state senator and your lieutenant governor, and now, to serve as the governor of our state,” Reynolds said in her inaugural speech two weeks ago. “It’s reflective of what can happen when you have a passion, you want to make a difference and you’re not afraid to go out there and work for it. I’m a fifth-generation Iowan, born and raised in St. Charles … Growing up in St. Charles, I learned the importance of community and love of country, of hard work and discipline, of fiscal responsibility and penny pinching. But most importantly, I learned to place my faith in God.”

Reynolds related her various jobs growing up, working as a waitress and a check-out clerk at Hy-Vee. It was a nice story, only to be one-upped by her new lt. governor when he was introduced the next day.

Adam Gregg, a former public defender, legal counsel to the governor and the party’s nominee for Attorney General in 2014, started out with a story of how he first met Terry Branstad. When he was a kid living in Northwest Iowa, Branstad came to visit Gregg’s hometown of Hawarden. Gregg showed up as the governor was headed out and raced after him on his bicycle. After getting the attention of Branstad’s state troopers, the governor’s car stopped and Branstad signed an autograph for Gregg, which he still has today.

“[Branstad] really couldn’t have known that his governing partner would have ended up choosing that same little kid as her lt. governor,” Gregg said.

It was a cute story. Gregg then went on to cast himself as the most regular Iowa dude you’ve ever met.

“I’m an ordinary Iowa guy,” he declared. “I grew up in a small town. Married my high school sweetheart. Got a wonderful young family who’s here today. And we face many of the same challenges as other young Iowa families. I’m still paying off student loans. Got a mortgage. We pinch pennies to be able to afford childcare and send our kids to Christian school. If there’s anything left over after that, we usually put it toward their college savings. Yeah, I’m an ordinary Iowa guy, but I have been truly blessed with extraordinary opportunities to serve.”

Watch this particular clip of him to see how he sold it:

“Gee whiz, who would have ever thought that a farm kid like me would end up here” was basically both Reynolds and Gregg’s way of introducing themselves to Iowa.

There was a problem with that, of course. Gregg very well may have had an “all-American” upbringing, but to pitch himself now as an “ordinary Iowa guy” is ridiculous for one big reason: he was a corporate lobbyist as recently as 2012. That session he lobbied for the Agribusiness Association of Iowa, Ruan, Allied Insurance, Nationwide Mutual and many others. Pinching pennies for your kids’ education is easier when your paycheck comes from big corporate interests.

That narrative, however, went largely unchallenged by Democrats. Instead the party hit him with your typical “misplaced priorities” and “failed budget” language, which could be used about most any Iowa Republican these days. There also wasn’t a full-fledged and coordinated messaging effort from Iowa’s left on Reynolds’ inauguration, which seemed like campaign malpractice considering the amount of time there was to prepare. All the Iowa press got was a couple press releases from various groups and candidates about how Reynolds was a continuation of Branstad’s mistakes. A few of the pieces were there, but there was no major amplification effort from key Democratic allies.

Meanwhile, Joni Ernst’s reputation as a fun, rural farm girl and veteran continued apace this weekend at her annual Roast And Ride. Unless you’re actually there, it’s hard to describe how good the image looks of Ernst riding her Harley with over 500 motorcyclists – many of them veterans – following behind her. Democratic activists love to still make fun of her castration ad, but there’s not a single Democratic politician in the state who can come off as warm, friendly or authentic as Ernst. And the sneering, judgmental castration and bread bag jokes only further alienate Democrats from rural Iowans. 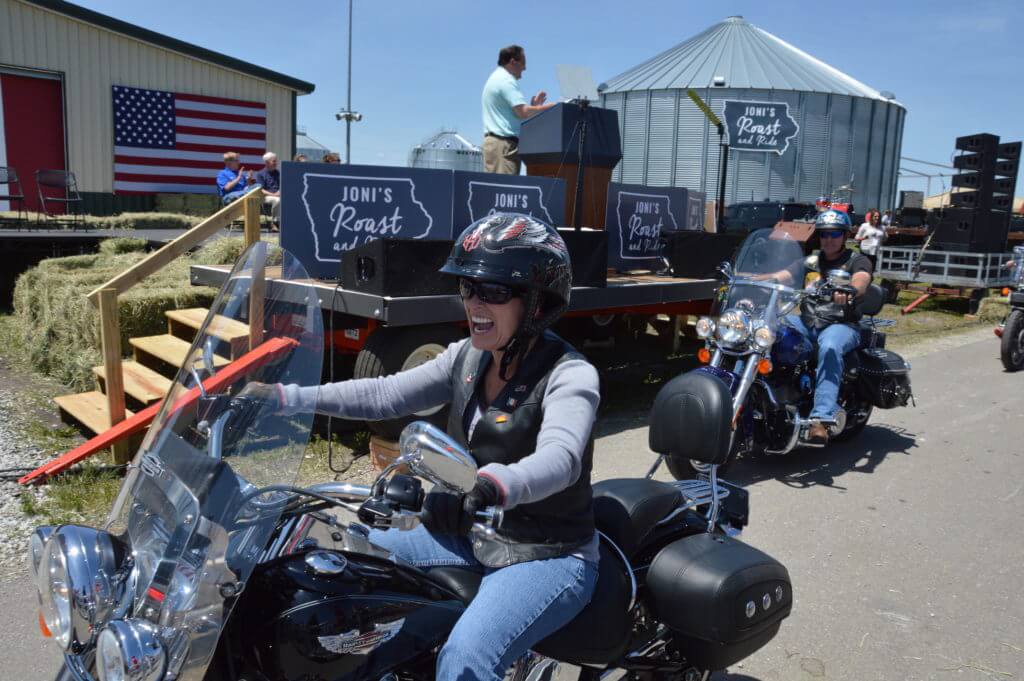 It’s all highly effective at distancing Republicans from some of the more controversial and unpopular policies they push. Consider David Young’s 2016 campaign. A guy who actually brands himself as unexciting, his best ad was one that simply talked about his past jobs (never mind the fact that he was a congressional staffer for decades).

Part of the reason why voters respond to this is due to the weird way we campaign on policies these days. “I’m for jobs!” shouts one party. “No, I’m for jobs!” claims the other. Unless voters studied policies in-depth or follow politics as much as Starting Line’s readers do, you often can’t discern the validity of candidates’ 10-point plans. So the best they can do sometimes is go with the person they feel they trust the most. And if that candidate looks like them, has lived the same life as them, the voter trusts that person is more apt to look out for their concerns.

But it’s not like two can play this game. The problem is that Democrats often fail at it, don’t even try, or put up candidates with too high a hill to climb. Bruce Braley highlighted his working-class upbringing, but was undone by that video of him demeaning Chuck Grassley as a farmer. Many Democrats criticized Staci Appel’s “I’m a mom” campaign strategy for her 2014 congressional race, but she had the overall right idea of making herself relatable, it was just the execution that was lacking. And there’s a reason the one successful Iowa Democrat – Dave Loebsack – constantly talks up his blue collar upbringing in Sioux City.

But to really highlight how Democrats have failed on this front, let’s take a trip down memory lane on an office the party too often fails to prioritize: Secretary of Agriculture.

Although Republicans’ control of the office is now taken for granted among many Iowans, Democrats actually controlled the Secretary of Agriculture office for a full 20 years between 1987 and 2007, with Dale Cochran and Patty Judge both winning multiple elections. And yet in the past three election cycles, Democrats’ nominees have been consistently weak and their biographies have been hard for rural Iowans to relate to.

Things first went south in the 2006 Democratic primary, when Denise O’Brien unexpectedly defeated Dusky Terry in a 57% to 43% upset. Terry was a top policy adviser to Tom Vilsack, and his father had been a well-known farm activist both locally and nationally. At the time, many saw Terry as a potential future governor. O’Brien was an organic farmer with less name-recognition and funding, yet she prevailed, perhaps in part because she was the only female on the entire statewide Democratic primary ballot that year.

O’Brien was decently-funded for the general election, but lost 50% to 48% to Bill Northey. She was well ahead in the polls leading into election day, but a story a few days out brought up an old charge about animal cruelty on their farm. O’Brien didn’t respond right away to it, the story quickly spun out of control, and she lost in a Democratic wave year that saw the party sweep nearly every other Iowa office.

Francis Thicke, an organic dairy farmer from Fairfield, failed to catch on as Democrats’ nominee in 2010, losing 60% to 35% to Northey. But the real problem came in 2014, when the best the party could do was Sherrie Taha, a water quality activist living in Des Moines, who had few ties and little clout in Iowa’s farming community. She received little support from the party and donors, and only got 32% of the vote against Northey.

Many Democrats believe the party’s failure to put up competitive Secretary of Agriculture candidates has damaged the entire ticket’s performance in rural Iowa. Democrats are already viewed with suspicion from many conservative farmers – fielding non-credible candidates for the government office they care most about hasn’t helped.

And the problem wasn’t so much the left-leaning agricultural policies the Democrats’ nominees were pushing as it was they simply didn’t personally reflect Iowa’s farm economy. The vast majority of Iowa farmers farm corn and soybeans. Democrats have put up two organic farmers and a Des Moines activist. It’s made starting the conversation with rural Iowans difficult.

And that’s the problems for Democrats, particularly for those wanting to push the state’s policy agenda further to the left, beyond just fixing what Branstad and Reynolds have wrought. To get to those policies that voters supposedly care about and support – or to push new, progressive ideas – voters first need to be able to trust the messenger. From a simple personal level, the individual Republicans running for office have looked more trustworthy to Iowans in recent elections.

Democrats often get too into the weeds on specific policy fronts, using nuanced research and charts and graphs to make a cogent point on how government should work. But those explanations can take much too long for a voter who only pays a little bit of attention to politics to absorb.

Yes, you can have those important policy conversations with Iowans of what went wrong at the Statehouse, how Republicans are hurting Iowa and why a Democratic agenda is the right one forward. But they have to trust you first. And if you fail to first establish that personal credibility, then you’re not doing the issues you’re fighting for any justice.

Democratic voters should keep that in mind as they approach the many candidates running in various primaries for 2018. The party faithful rightly should back the candidates who advocate the policies they care about most. But they should also keep an eye toward which one is laying out an effective personal story that will connect with voters in the general election, allowing them to pitch those ideas to the broader electorate. Because while some Democrats may roll their eyes at the hog-castrating or “ordinary Iowan” messaging, it works.

13 Comments on "The Real Reason Why Iowa Republicans Keep Winning"