Iowa politics can be fun when you have a long memory. Take today, for instance. Kim Reynolds announced Adam Gregg as her “acting” lt. governor (due to Attorney General Tom Miller’s ruling, he will be essentially a staff role for the time being). In doing so, Reynolds effectively announced the Republican ticket for 2018.

As such, they did what campaigns often do: set up websites and campaign committees and twitter accounts and Facebook pages. Reynolds’ new gubernatorial campaign website is GovernorReynolds.com, which as I noted earlier today, might confuse some people as to what exactly is Reynolds’ political side and which is her official side.

But the fun part came as Adam Gregg was being formally introduced today at a press conference, the website ReynoldsGregg.org started bouncing around Iowa political circles. It was most definitely not created by their campaign. Instead, it ticked off ways in which the Branstad/Reynolds Administration had negatively impacted Iowa workers, schools and the state budget. 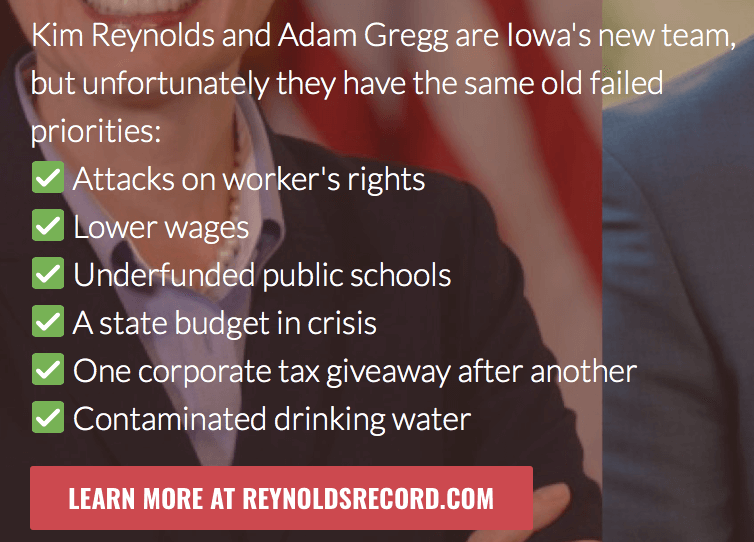 The page then links over to ReynoldsRecord.com, run by Progress Iowa, which contains news clips of negative stories about poor Iowa economic rankings, lawsuits against the Branstad/Reynolds Administration and environmental problems.

All in all, it was a bit of good fun from a progressive organization to creatively call attention to criticisms of Reynolds’ tenure as in office. A few reporters were fooled by the fake @ReynoldsGreggIA Twitter handle for a bit, and several Republican leaders accidentally used it to congratulate the new team. A tad embarrassing, but no big deal in the long run.

So why bring this up? Because when Jack Hatch’s campaign didn’t reserve the HatchVernon.com website, Republican operatives – including some on Reynolds current staff – went absolutely apoplectic on the Democrat’s campaign.

Hatch announced Vernon as his running mate in June of 2014. The Branstad campaign, hearing rumors in advance that it would likely be Vernon, bought up the website HatchVernon.com and used it as a way to criticize the Democratic ticket. On the morning of the Vernon announcement, Branstad campaign operatives like Tim Albrecht and Jimmy Centers endlessly mocked the mistake.

Remember the Iowa Dems big digital machine? Ya, it forgot to secure a domain AND twitter handle @HatchVernon. #iagov http://t.co/496A7byn78

Everyone knows even if you don’t plan to use a domain you still buy it or…http://t.co/fFCMaIvrKG happens. #derp #iagov

They added a couple jokes to the website itself as well.

They had a point (albeit, a very small one – the Hatch campaign already had a website, buying up other names only serves to prevent this, not provide anything), but the extent to which they played it up was utterly ridiculous. The Hatch campaign staffers were the dumbest people in Iowa! Worst campaign ever! Oh, what idiots those Democrats are. Really, Republican operatives just had an absolute field day with it.

And it worked. The Des Moines Register and KWWL ran stories on the whole incident. Iowa political reporters took the bait, hook, line and sinker and debated it non-stop on Twitter instead of the merits – positive or negative – of Vernon’s addition to the ticket.

After all that, after Iowa’s Republican operatives made a Democrat’s failure to reserve a website a huge, massive deal, what happened today?

This time to the Republicans. And what do you know, Albrecht, who led the charge in 2014, works in Reynolds’ office now.

So this is more a question to Iowa reporters than anyone else: Why do you still take these jabronis seriously?

You’ll notice that the Democratic operative circle didn’t go nuclear on the professional competence of the Reynolds new campaign staff. Because we know that while it was an error on their part, it isn’t the end-all-be-all for the Reynolds’ campaign, that it doesn’t mean their staffers are a bunch of morons, and that it certainly doesn’t make a bit of difference to voters. And because some of us actually value our credibility, we didn’t try to push that narrative. In fact, you may have noticed, that the Democratic response to Reynolds’ inauguration has been focused in on the actual policy issues.

However, even without that push, another question for Iowa reporters: why didn’t you respond in the same way today as you did three years ago?

Think on that some, folks.