The Democrats’ quest to retake Terrace Hill kicked off in Quasqueton this weekend, a tiny, picturesque town in Buchanan County. Local Democrats held a county party fundraiser that five gubernatorial hopefuls attended. The contenders chatted with Northeast Iowa activists over a barbeque dinner before delivering their pitches in front of the room. With a loaded speaker lineup – 13 in all – the event stretched on for nearly four hours, but the 100 attendees – angered by recent Republican-passed legislation – stayed and listened intently long after the sun had set.

It was the first time that many of the local Democratic activists had seen or heard of the potential candidates, although Boulton’s name came up the most in interviews with attendees beforehand.

Callahan was one of the workers at the Independence Mental Health Institute that got laid off by Branstad when he shut down the children’s ward there. She now works in child support in Waterloo, and became much more involved after the election – flying to Washington D.C. for the Women’s March and becoming involved in the local Indivisible group. That’s how she stumbled upon Boulton, after following Robb Hogg on Facebook and seeing videos from the Statehouse.

A few others had heard of Leopold, who was the first to announce in January.

“I’m leaning toward Leopold,” offered up John Mann of Fairbanks, noting he’s still listening to the full field. “They’ve got to reach out to the younger voters. What Bernie Sanders was talking about … The idea of getting school free or getting their loans paid. But realistically, they can’t be done without a lot of things being passed … We’ve got to do something about revenue to pay these things.”

Others wanted better geographic representation – this area of Northeast Iowa used to vote reliably for Democrats, but swung hard for Donald Trump.

“I really want someone from Eastern Iowa, not Des Moines, so I’m hoping this Matson guy’s okay,” Julie Hooker, 59, of Manchester said, adding she’d also seen Prichard speak in Elkader earlier. “I was impressed by Prichard. I like that he’s concerned about keeping our water clean and the environment. Helping small farmers and not factory farmers. Away from Des Moines.”

And many expressed their concern over young voters in the area, who they said were motivated by Bernie Sanders in the primary, but then didn’t show up in the general election. Those people were looking for a more inspiring candidate – either in demeanor or progressive policies.

“It was very surprising for me on [election night],” explained Jonathan Werkmeister, 21, of Evansdale. “I didn’t realize there was that many people who voted for Trump around me … I want somebody who will stand up to the President like the California Governor has. It would be nice to have someone locally stand up – be a force to be heard rather than be complacent.”

After a social hour where the candidates worked the tables, the grand marathon of speeches began. Here’s how each gubernatorial hopeful made their pitch, in order of appearance:

Nearly every candidate speaking that night had a story about growing up in rural Iowa, or of family members who still own farms. Carberry described his upbringing in Grant and Benton County, Wisconsin, just over the river from Dubuque, where his father was a large animal veterinarian. Now he’s a county supervisor in Johnson County, and told the crowd his county’s proud of their progressive reputation.

“When I was elected Johnson County supervisor, I was the third vote to raise the minimum wage,” Carberry said. “We were the first county in Iowa to raise the minimum wage to $10.10. That has been taken away from us … If I were lucky enough to be elected governor, we would be working on getting the wage up to a livable wage, and that means the fight for 15.”

He also stressed the need to expand wind and solar production in the state. 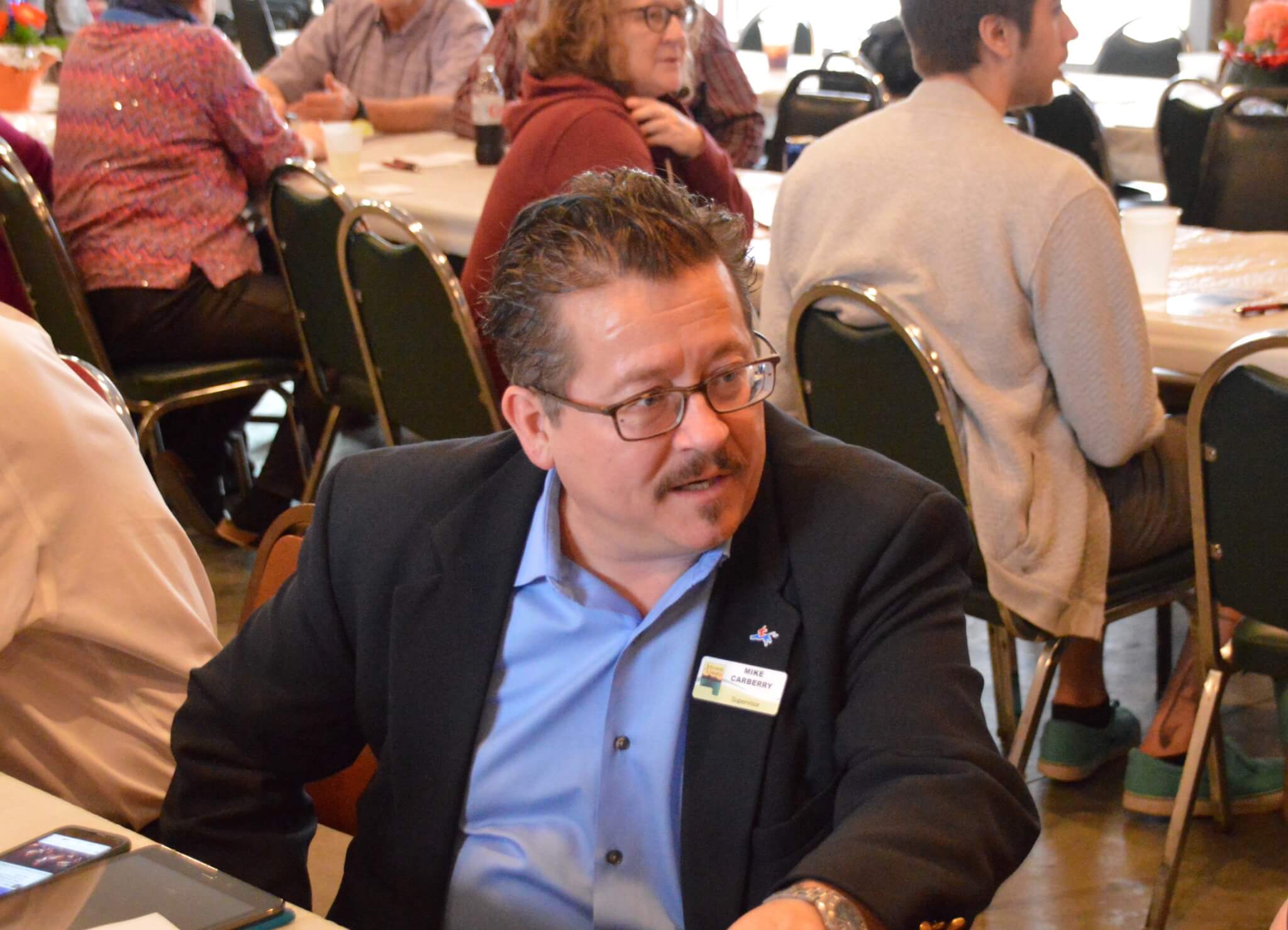 And while Carberry touted his progressive credentials and big ideas, he also pitched a more pragmatic tone when it came to water quality.

“All the time I spent up at the Statehouse being an environmental lobbyist, I realized the most powerful force in the state of Iowa is the Iowa Farm Bureau,” he said. “Nothing – absolutely nothing – in this state gets done without their blessing … I can work with both sides. Sure, we like to win a lot, but when one side wins, the other side loses. What’s really best for the people of Iowa is when each side gets a little bit, and the best deal for the people is in the middle.”

He also decried the focus of Republican legislators this session on things like defunding Planned Parenthood.

“We’ve got a bunch of middle-aged white guys telling women about their healthcare choices,” Carberry opined. “Who am I to tell any woman about what they should do with their healthcare issues? My mom would slap me if I would do that. Some of these legislators need to be slapped.” 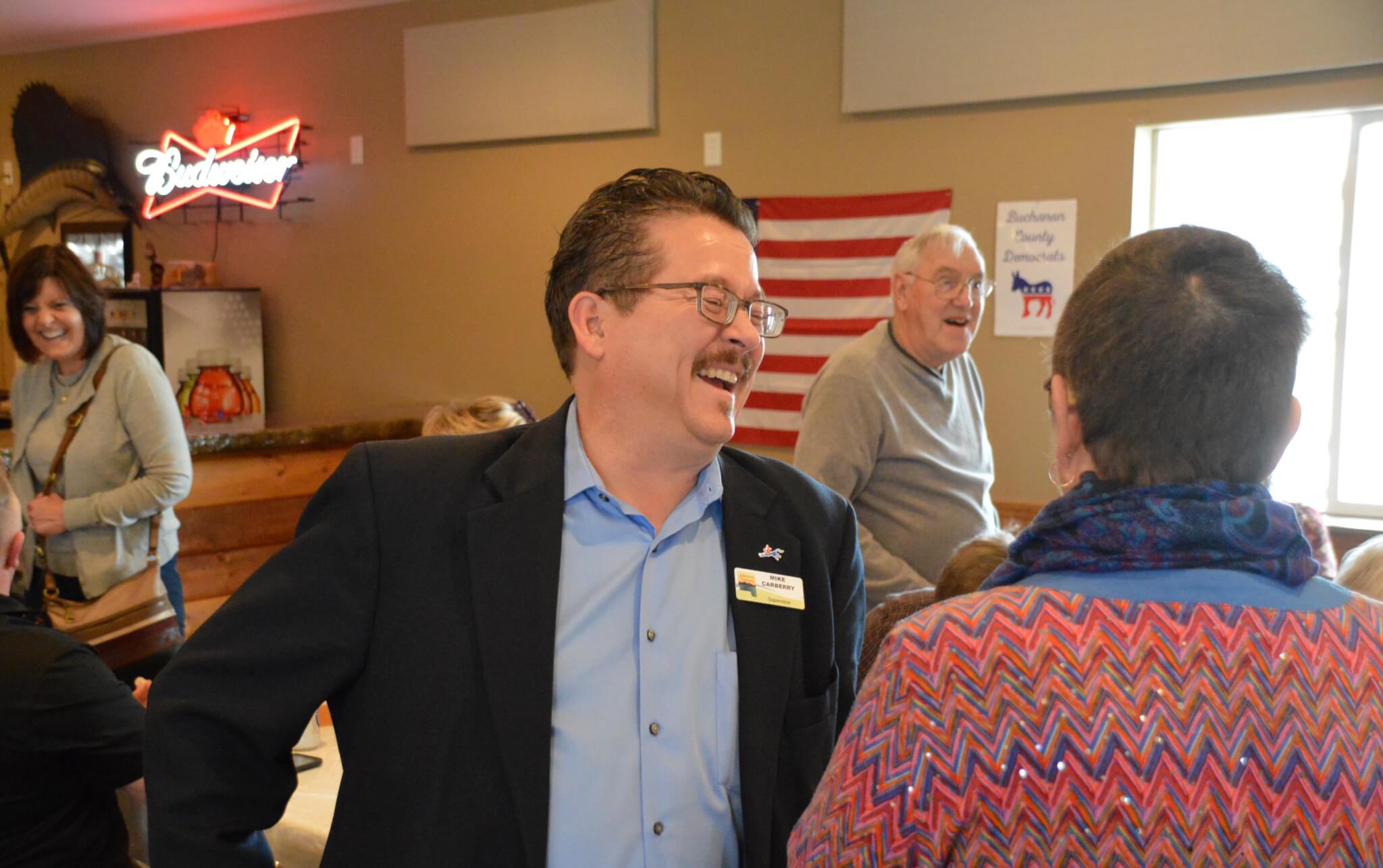 The former Iowa DNR director laid out his campaign slogan of “Going Outside,” meant both to highlight environmental issues and show that he’s not a typical politician.

“I’ve never run for political office before, I’m actually a scientist by trade, an ecologist,” Leopold explained, adding that he’s worked in the fields of water quality, agriculture policy, forestry and endangered species.

He related his frustration over rising water pollution levels, even when he headed the DNR. Part of the continuing problem, he noted, was due to Republicans’ misplaced spending priorities that have driven the budget into the red. And he wanted Democrats to focus more on rural outreach to expose Republicans’ impacts on them. 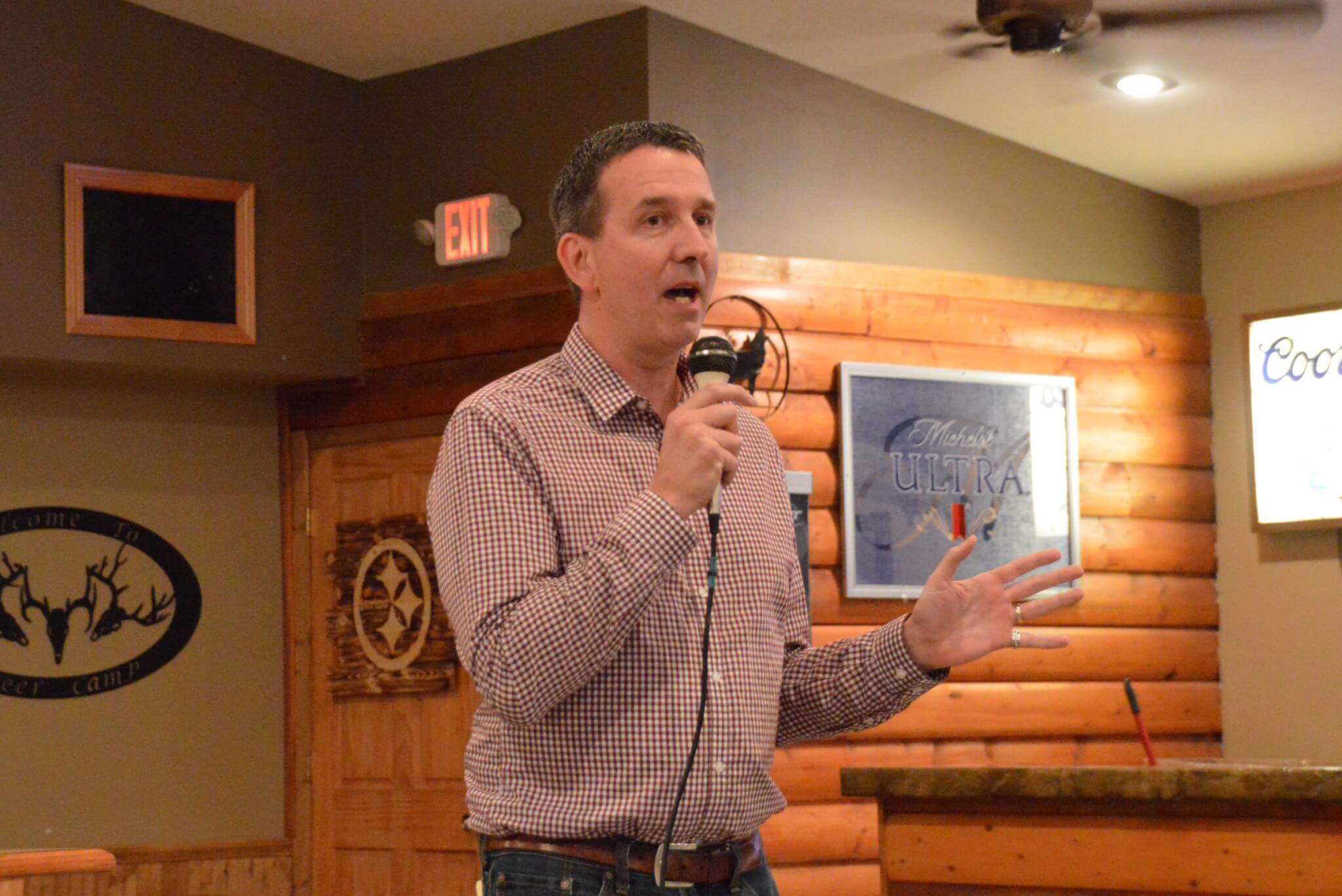 “The recovery has happened, but it’s largely happened in the urban areas,” he said. “In all the rural areas, the Medicaid rolls are still soaring, so what do we get from the Branstad/Reynolds administration? … We get a short program where they invite in some of their cronies, choose a few winners and shove it down our throats.”

But to win in 2018, Leopold argued Democrats needed a fresh approach, and pitched himself as the most electable candidate. Making the same mistakes of past campaigns would doom the party again, he warned.

“I am dedicated to building the Democratic Party,” Leopold told the local activists. “But we have some self-examination, and we know that. We’re doing that. In the last 10 to 15 years, a lot of our Democrats have not been leading, they’ve just been trying not to lose. And we’ve been getting our butts kicked.”

One of the newer names that’s considering a run, Davenport Alderman Mike Matson described a bit of his background as a longtime member of the Army, relating it to leadership skills.

“We understand how decisions in the Capitol affect people on the ground,” Matson said. “When I was in the Army, when I became a Sergeant Major, I was always talking with senior officers about when they make decisions, how does it affect the solider on the ground? Is it going to put more weight in his rucksack? Is she going to have to work longer hours? I see the same thing here.” 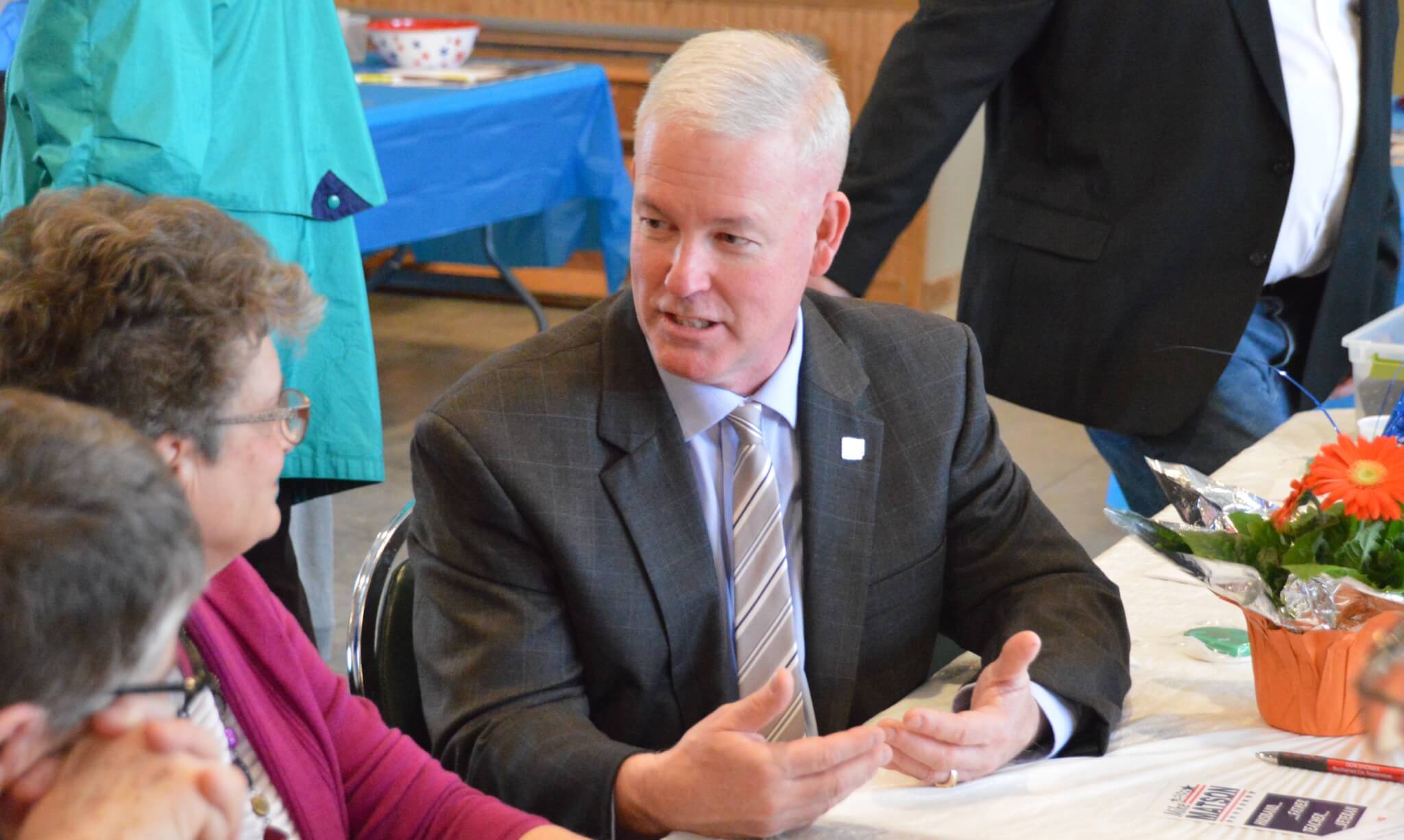 As an ISEA member in the Davenport public schools, Matson had seen first-hand the impacts of both reduced funding and collective bargaining changes.

“For 40 years, we’ve been acting like adults, sitting down with our bargaining units and city councils and school boards and working out our differences,” he claimed. “Now all of a sudden we can’t do that? Maybe it’s because we don’t have adults on the other side to do that.”

And he drew a loud round of applause for bringing up the fight Davenport schools have been waging against the Branstad administration.

“1.1 allowable growth – that’s unacceptable,” Matson argued. “Just in Davenport, we have a $17 to $18 million deficit as we speak. We have a superintendent who might lose his license because he’s standing up for kids. They won’t even allow us to use the funds that we have in our reserves.”

Matson gave one of the shortest speeches – the night had run on for some time – but notably worked the crowd the most beforehand, introducing himself one-on-one to nearly every attendee.

The former Des Moines School Board president and Democrats’ State Auditor candidate started out his speech with a joke, saying the people there probably voted for him in his 2014 down-ballot race, but didn’t remember it. He went on to cast himself as the outsider contender who is fed up with the state’s “politics as usual.”

“If you like the status quo – and I don’t think anybody in the room after what’s happened in Des Moines likes the status quo – I’m probably not your candidate,” Neiderbach said. “I believe we need to change how politics works. We need significant campaign finance reform.”

Neiderbach talked about how he used to work in the nonpartisan Legislative Services Agency, back when the two parties were able to work with each other from time to time. He blamed the influence of big money on poisoning those relationships today. 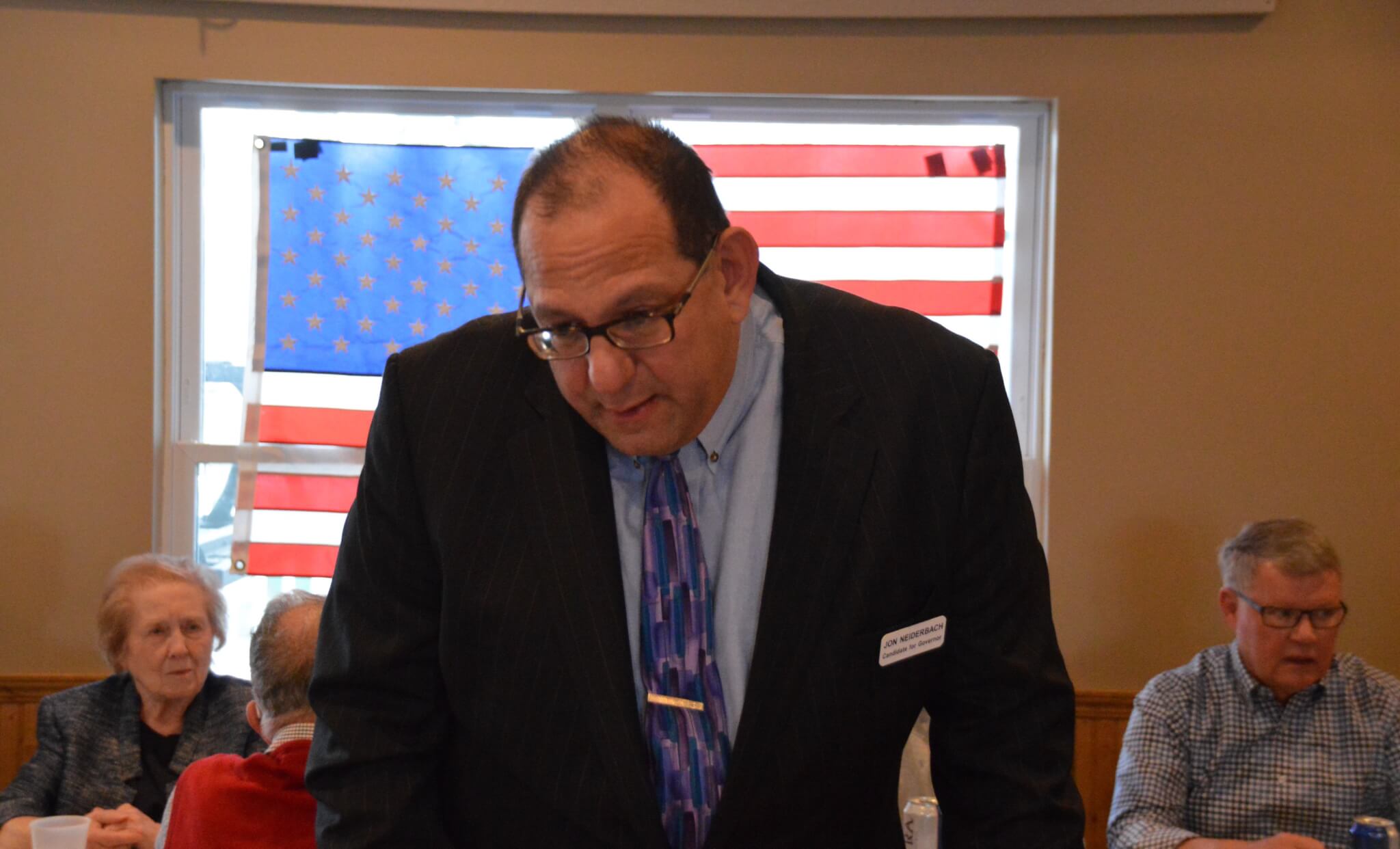 “We shouldn’t be timid … I think we need to set ambitious goals,” he said. “We need to eradicate – not reduce – eradicate hunger in Iowa. We produce more food than almost any other state … There is no possible excuse to have hungry kids in the state of Iowa.”

And Neiderbach promised to defend the Democratic Party’s platform, which he called the most progressive the state party has ever had. He also looked forward to contrasting himself with Kim Reynolds, using his experience working on legislative issues.

“This campaign is going to be fought on fiscal management,” he predicted. “That sounds incredibly dry and incredibly boring. But the fact is the best albatross we have to hang around Kim Reynolds’ neck is this is the worst-managed, most incompetent administration we have had in a very, very long time.”

Prichard couldn’t make it to the event due to his National Guard schedule, but local Representative Bearinger spoke on his behalf, calling his colleague a “quiet, determined man.”

“I’ve watched him meticulously tear apart a Republican’s argument on the House floor and then that same day go work with that guy to craft some legislation,” Bearinger said. “He is a person who is dogged, hardworking and put in the time necessary to get the job done.”

Boulton had to miss the social hour of the event as he was receiving a “Legislator of the Year” award from the UNI faculty staff in Cedar Falls, but walked in the door literally right as it was his time to speak. He began by talking about his union member parents, his upbringing in Columbus Junction and how his mother still lives on a family farm.

Mostly, Boulton related his experience suing the Branstad administration, which drew loud applause and cheers from the crowd.

He went through each – one over Branstad’s veto of funding for workforce development centers, one for illegally shutting down the juvenile home in Toledo, and one involving the MHI facilities in Clarinda and Mt. Pleasant.

“What we’ve seen in this Legislature is a Branstad/Reynolds administration that has only taken away, has only held back, has only disadvantaged working Iowans who actually sacrifice to make our economy work,” Boulton told the crowd. “Yeah, we can be upset about it, but we’ve got to do something more. We’ve got to advance our agenda, we’ve got to share our vision with Iowans of how we move forward. Think of the difference in the quality of life of Iowans if instead of giving away hundreds of millions of dollars in tax credits and tax giveaways, we actually fund education.”

Boulton implored Democrats to not simply be angry about the changes, but to seize the opportunity to lay out a better, optimistic vision for Iowa’s future.