Hundreds of worried Central Iowa residents flooded the Iowa Statehouse Monday morning for a public hearing on the Republican bill to dismantle Des Moines Water Works. Opponents to House File 848 outnumbered supporters 177 to 8 on the speakers list beforehand. Dozens of Des Moines-area residents, local elected officials and water board members – both from Central Iowa and around the state – blasted the legislation as dangerous and as a retaliation for the Des Moines Water Work’s federal lawsuit against polluting Northwest Iowa counties.

“It abruptly places responsibility for the creation of safe drinking water and investment in water infrastructure in entities that don’t have experience or expertise in doing them, just like in Flint, Michigan,” Mandelbaum added.

The Des Monies City Council voted to support the amended plan from House Republicans, which has drawn heavy criticism from many residents. The bill dissolves the water works boards for Des Moines, Urbandale and West Des Moines, giving their former power to the city councils, which will in turn develop a plan for a regional water governing body. 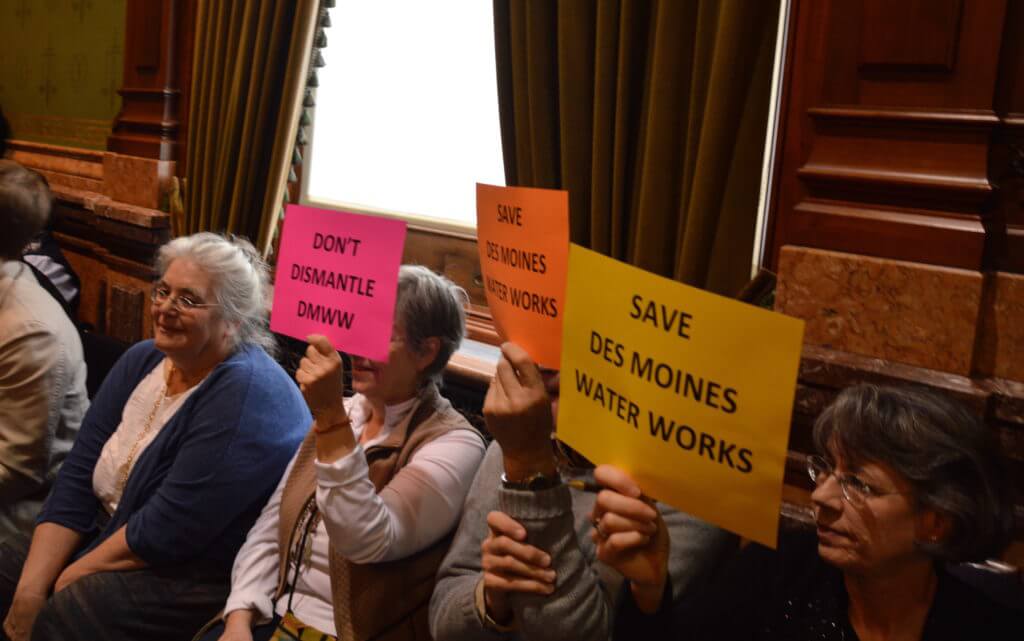 “It’s about political revenge,” charged Matt Sinovic of Progress Iowa. “Republicans don’t like that the Des Moines Water Works is in court, standing up for Iowa families who deserve clean drinking water. Instead of solving the problem, you’re out for revenge and trying to break up the Des Moines Water Works, along with the so-called Iowa Partnership for Clean Water and Des Moines Councilwoman Christine Hensley, pushing to silence Bill Stowe and those who want to stand up for clean water.”

She too cautioned that this could start Des Moines down the path of a Flint, Michigan water disaster.

“Taking assets of a public water utility is the exact kind of state government meddling that created a public health water crisis in Flint, Michigan,” she explained. “This flies in the face of home rule we have in this state.”

Like many other major pieces of Republican legislation this year, little input from the public or the affected parties was sought in this water works bill. Representative Jared Klein, a farmer from Keota, is sponsoring the bill, which was run through the House Agriculture Committee instead of the State Government Committee.

“I have literally been told that I should just trust the process,” complained Zach Bales-Henry, a Windsor Heights city councilman who spoke passionately at the hearing. “I have spent weeks trying to follow this process and I can’t answer the question as to why we need this. I don’t even disagree with regionalization … but I disagree with something coming from this level telling my city how to deal with this.”

The bill has already made it through its House subcommittee and committee, and will come to a vote on the floor relatively soon before working its way through the Senate. This morning’s hearing was the first in a set of three on contentious issues today: minimum wage and voter ID hearings are scheduled for this evening.