Yesterday the Republican controlled Senate Labor Committee passed the most devastating blow to the rights of public service employees in over 40 years.  Republican Senator Jason Schultz, R-Schleswig, who managed the bill opened the hearing by claiming this devastating change is necessary because it’s a “Different world and a different Iowa.” He claimed wiping out public employees’ rights to have a voice in negotiating their futures was simply modernization.

Senator Schultz was unable to provide a logical basis for eliminating over 40 years of a proven negotiating model. He can call it “modernization” or a “different Iowa” but both sides know exactly the motivation. This is a direct attack on unions and their ability to defend their members. Crushing collective bargaining will severely weaken unions ability to raise money and that’s one of the Republicans’ prime goals. In addition, by removing many of the benefits that unions are able to negotiate, Republicans can reduce the power and influence of unions. The losers are the public employees that lose their union voice. Those unions have been fighting for them for over the past 40 years through collective bargaining agreements.

Both Senator Bolton, D-Des Moines, and Senator Bisignano, D-Des Moines, asked Schultz who supported the bill. Schultz admitted the crowds that have turned out at each of these hearings are nearly all in opposition to his bill. The committee room was jammed with all the chairs and standing room filled. However, Schultz claimed he had heard from many people behind the scenes that support his bill. He claimed they weren’t appearing because they were afraid of retaliation. That brought a hardy laugh from the crowd.

He was asked about who he consulted in writing this bill. Schultz claimed he met with unions and got their recommendations. Following the meeting, in a telephone interview, Danny Homan, President of AFSCME Iowa Council 61, disputed that claim. He said he wasn’t consulted and wasn’t able to make any recommendations. He said other union officials were told there would be no changes accepted.

Schultz did honestly admit he hadn’t consulted with any Democrats about his bill. It was very obvious that Republicans don’t care what unions, Democrats or the public think about their bill. They have it on a fast track and are ramming it through in record time.

The only crack in their unyielding march to crush all labor unions is an exception they made for public safety positions. Apparently, public safety employees will retain much of the current collective bargaining rights. Schultz’ lame excuse for justifying this exception is based on his claim that law enforcement and fire fighters enter dangerous places. He didn’t attempt to provide any logical reason about why the “dangerous places” environment made any difference. 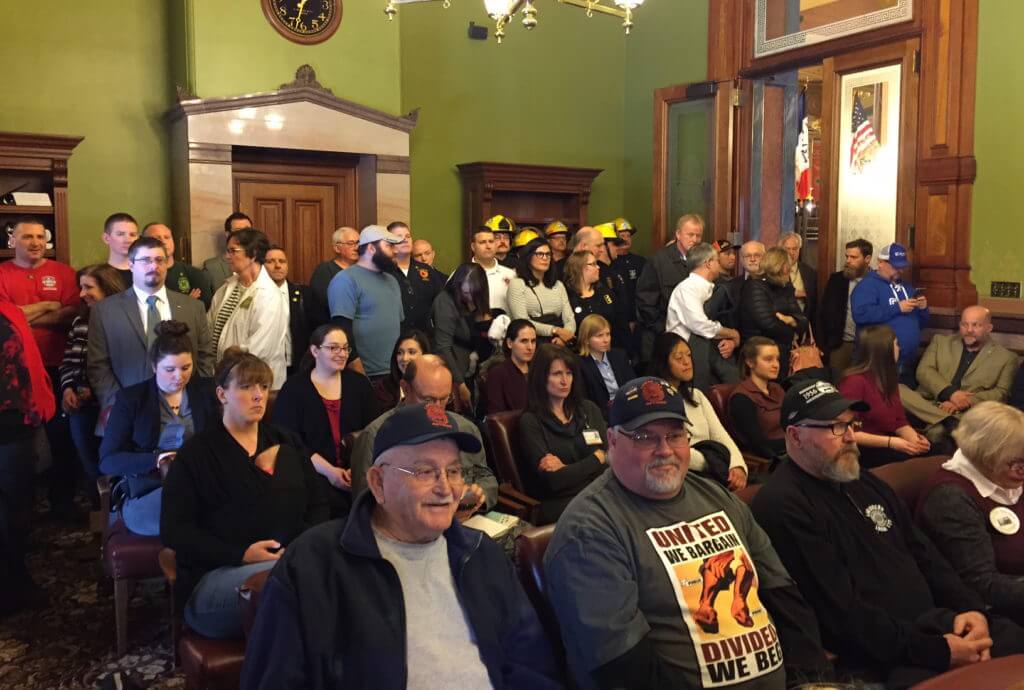 Again, the real reason for this exception is obvious. Republicans fear that if they strip police officers and firefighters of their bargaining rights it might create bad public relations for them. They assume that they can get away with taking rights away from other public service workers without much blowback. However, Republicans don’t want to be seen as harming the police officers and firefighters. They probably think they can steal their rights in another year or two. To Republicans, public service employees are second class citizens to be treated with disdain.

The Democrats didn’t hold their fire, but the Republicans hold a majority vote margin. Democrats attempted to appeal to Republicans on a number of issues but the Republicans were unbending. They clearly came to the hearing with their minds made up and no amount of logic or reasoning would change their course. Iowa Republicans are following Governor Scott Walker’s Wisconsin model of union busting.

Senator Bisignano made that point when he said he wished the Koch Brothers could be there to see what Iowa Republicans have done. The Kochs were very instrumental in assisting Walker in Wisconsin in his successful union busting. Senator Bisgnano described the Republican action accurately when he said they had, “gutted collective bargaining.”

Senator Dotzler, D-Blackhawk, discussed the damage done in Wisconsin that resulted from their union busting. He predicted that Iowa public employees will see the same results. He called the Republican attack on labor as, “shameful and mean spirited.”

Senator Bolton asked the Republicans to slow the process down. He asked, “what’s the rush to disrupt the current process?” He asked that they, “talk to the people in this room.” “The people that have filled this room are worried about their livelihoods.”

Republicans ignored all the facts and passed the bill on a party line vote, 7 to 4. Now it goes to the full Senate where we need to make our voices heard.