At a public hearing today of the Iowa House Education Committee, members of the public voiced their frustration over yet another year of inadequate school funding. Last week Republicans rammed through a bill in one day in the Iowa Senate that provided only a 1.1% increase in school funding for 2018. The measure is now in the House under House File 136.

According to a list of speakers compiled before today’s meeting, more than 200 people signed up to speak in opposition to the bill, while only four were in support. An overflow of public education supporters watched on a livestream in the Capitol rotunda. ISEA President Tammy Wawro criticized House Republicans for intentionally setting the hearing during a time when school teachers could not attend to share their own stories.

A long procession of speakers lined the hallway to get their chance to address the committee. Many Democratic senators and representatives that aren’t on the Education Committee stood against the walls and watched.

“Across the state, class sizes are growing. When funding is cut, schools cannot afford additional staff and vacancies are left unfilled,” said Yvonne Hogan, a retired teacher of 38 years. “[There are] elementary classrooms with 35 students, like the 5th Grade class in Council Bluffs that combines two sections into one this year. Numbers like this are becoming the norm. Teachers’ ability to help students one-on-one can’t happen. Teachers just can’t get to every student with a class that large.”

Most speakers noted that while the State Supplementary Assistance (SSA) for schools was an increase, it once again failed to keep up with inflation, meaning schools would need to make more cuts. Every year of Terry Branstad’s current administration has seen funding levels fall short of matching the pace of inflation. The 1.1% amount would be the third-lowest funding allocation for schools since 1973. 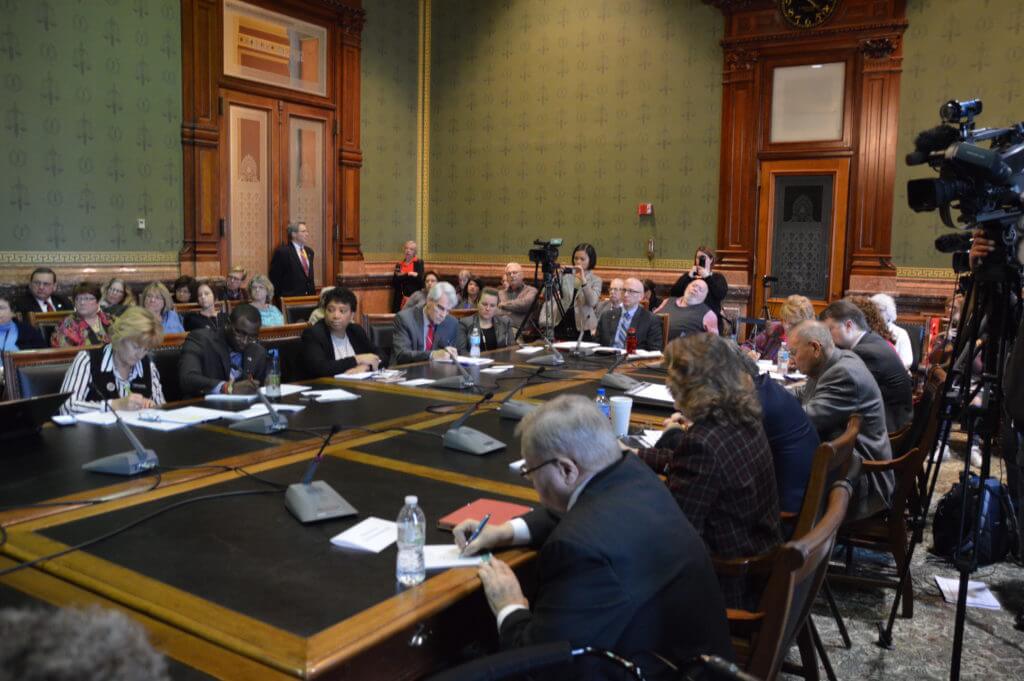 Another year of low funding is particularly concerning for rural school districts, which have seen consolidation of districts in recent years.

“The proposed SSA of 1.1% is disappointing,” commented Gregg Cruickshank, the superintendent of the Sidney school district of Southwest Iowa. “Sidney’s general fund new money will increase by $650,000 to $675,000 over two years, substantial for a small rural district. This is because Sidney certified enrollment increased by 107 students over the last two years. This is an anomaly as a result of financial stress of neighboring districts and the forced dissolution of one of those districts. The prior six years Sidney received a net negative $41,008 of new money.”

Others pointed out that the current budget crunch Iowa finds itself in is in large part due to many tax handouts and cuts for large corporations. Under Branstad’s administration in the past six years, business tax cuts have increased six times faster than education funding.

“That doesn’t sound like our students and our schools are a priority for this legislature,” Brad Hudson of ISEA said of the proposal. “Every Iowa child, regardless of their zip code deserves our very best. $40 million is not our best. Your bill actually reflects a 56% cut in the current year … Iowa’s budget is actually in fine shape, however, if you reviewed our tax policies, I think we could do more for our students and our schools instead of out-of-state corporate interests.”

The Iowa Senate passed the 1.1% increase last week, with all Republicans voting in favor and all Democrats opposed, as well as David Johnson, the one independent senator. Republicans voted down a Democratic amendment to bring the funding level back up to Branstad’s 2% proposal.

The bill also removed the requirement to set education funding levels within the first 30 days of session, a deadline the Legislature has repeatedly missed in the past several years. School administrators warned they can’t set their budgets properly under an uncertain timeline.

Republicans were also expected to release their legislation that would gut Iowa’s collective bargaining law today, though as of 3:00, nothing has been made public. That proposal will likely undermine teachers’ ability to bargain for their wages and benefits, leading to lower salaries and higher health insurance costs for them.