President Trump’s Muslim ban is so incredibly cruel because of the paralyzing fear it has created in America’s immigrant and refugee communities. It is based on a totally dishonest claim that it makes America safer, yet according to many United States Diplomats, it’s already proven to have damaged our security. The Foreign Service is circulating a memo calling the ban counterproductive and suggests it will make America less safe. Perhaps the greatest harm done by this Muslim ban is the shameful betrayal of America’s long commitment of welcoming immigrants and refugees.

The cruelty of this ban is obvious in the fear and anxiety it has generated in the immigrant community as well as the educational community. An Urbandale teacher reported at a recent forum the depth of that anxiety in her classroom that has resulted from this ban. She described one undocumented child’s fear that she might go home to find that her whole family was gone, deported.

Des Moines Public Schools (DMPS) have been reporting that many children have expressed worry and fear about the consequences of this ban. Student apprehension was so serious that the DMPS issued a statement in support of immigrant and refugee students in direct response to President Trump’s executive order. The DMPS message to immigrant and refugee students: “You Belong; We Stand by You.”

The DMPS placed this public statement on their website: “To all of our students who are immigrants or refugees – and to their friends and classmates and teachers who are also concerned because of these recent events – know that you belong here and Des Moines Public Schools stands by you. At Des Moines Public Schools, we welcome immigrants and refugees as our students and families, as our neighbors and friends. Over the years, thousands of refugee students from around the world have attended school at DMPS. Our students, parents and staff come from more than 100 nations, and each day dozens of different languages are heard in the hallways and classrooms of our schools. Our diversity of language and culture and heritage is a part of our strength, in our schools and throughout this community.” 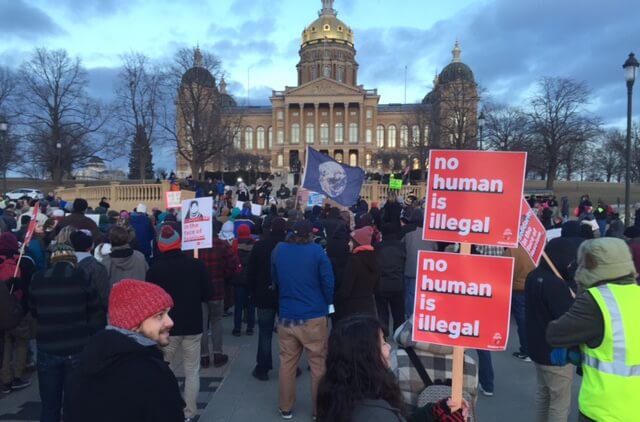 Every American would agree that we must properly vet all people entering the country. However, to selectively and narrowly single out these seven majority Muslim countries does nothing to improve our security. None of the 9/11 hijackers entered the United States from any of these countries. No American has ever been killed in a terrorist attack in the United States that has been carried out by a national of the now-banned countries: Iran, Iraq, Libya, Somalia, Sudan, Syria, or Yemen. It’s far more likely someone coming from Europe on a visa waiver would be a threat to our safety than anyone entering from one of these seven countries.

This does nothing to improve our national security. It is another one of President Trump’s dishonest political stunts veiled in a shroud of fear.

President Trump’s banning the entry of people from seven majority Muslim countries created mass chaos at airports across the country on Saturday.  It is a shocking and dishonorable reversal of America’s long legacy of our growing diversity. The giant tech companies that understand the importance of immigrants to their businesses quickly joined the debate. The CEOs of several tech companies or members of their boards (Apple, Amazon, Microsoft, Facebook, Google, Twitter) called the ban “un-American,” and vowed to do what they could to ease its effects. 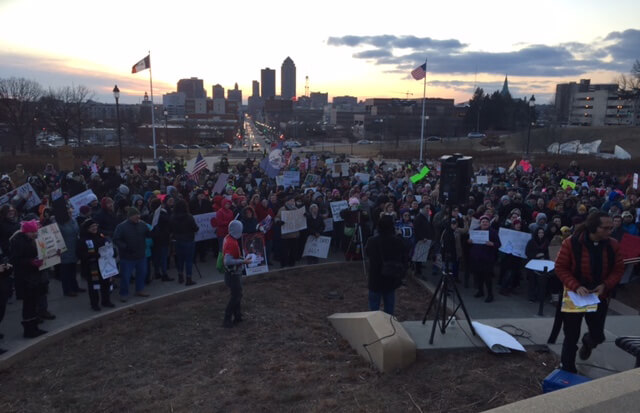 Tech companies understand the importance of a vibrant and functioning immigration policy. Many spoke out condemning the travel ban. The tech industry understands the tremendous value immigrants have made to their success. Many of them are immigrants.

Sergey Brin, co-founder of Google, joined a protest in San Francisco. Brin is a refugee from Russia. Google employees joined protest rallies at several company locations around the world, #GooglersUnite.

Apple CEO Tim Cook, referring to founder Steve Jobs’ Syrian heritage, issued this statement in response to Trumps ban, “Apple would not exist without immigration, let alone thrive and innovate the way we do.”

Facebook CEO Mark Zuckerberg tweeted this about America’s proud legacy of immigration, “My great grandparents came from Germany, Austria and Poland. Priscilla’s parents were refugees from China and Vietnam. The United States is a nation of immigrants, and we should be proud of that.”

Satya Nadella, Microsoft CEO, spoke out as well, “As an immigrant and as a CEO, I’ve both experienced and seen the positive impact that immigration has on our company, for the country, and for the world.”

Amazon CEO Jeff Bezos issued this in opposition, “This executive order is one we do not support. We’ve also reached out to congressional leaders on both sides of the aisle to explore legislative options.”

It’s obvious President Trump’s executive order has damaged relationships with our allies around the world. It is an unnecessary ban that has further divided our country and resulted in making us less safe. The cruelty to our children that this ban has imposed is unconscionable.

We must resist this un-American and immoral ban. Moveon.org began that resistance by organizing office visits at Congressional offices around the country this past week. A group called on both Senator Grassley and Senator Ernst Offices asking them to oppose the ban. 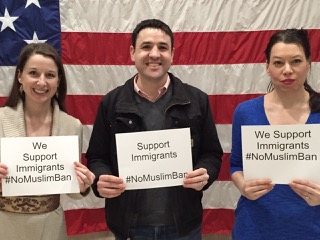 The Des Moines resident and organizer Jordan Hobfoll described the reasons that brought him to the Senate offices. He said, “the ban is un-American and believes it to be unconstitutional as well.” He added that he was heartened that Iowa Attorney General Miller stood up against the ban.

We must keep the pressure on both Senator Grassley and Ernst to stand up for Iowa’s immigrant and refugee communities.