The Iowa Legislature is back in full swing this week, so you know what that means: Republicans are introducing all kinds of crazy-sounding legislation. The big difference this year? With Republicans in control of all Iowa government for the first time in 20 years, this stuff actually has a chance of passing.

Republicans are expected to gut Iowa’s collective bargaining laws sometime early in the session, but previous predictions that they’d do it in one fell swoop in the first week turned out to be incorrect. Instead, Republicans seem to be holding their cards close to the chest on a number of major issues. The only really big piece of legislation filed so far is the Senate Republicans’ bill to defund Planned Parenthood.

On the House side, no real pieces of legislation have been filed yet, just a handful of resolutions on various formalities. It seems the House Republican leadership is running a tight ship – few details on any bill has leaked out. But on the Senate side? Lots of fun stuff. Or terrifying stuff, depending on how you look at it.

Let’s take a look at the top ten craziest bills filed so far that caught Starting Line’s eye. If there’s one we missed that you like (or hate), add it in the comments.

Just one more way Republicans want to end all safe and legal abortion access by any means necessary. Chelgren wants to allow women to sue the doctor who performed their abortion for emotional damages, even if there was no physical harm done to her or any malpractice involved. So essentially if a woman ever decides at any point in her life that she regrets getting an abortion, she could go and sue her doctor (the legislation does note that if she provided signed consent ahead of time, she may get reduced damages, but can still clearly sue). This is one of the most ridiculous ideas for stopping abortion, aimed at punishing doctors for performing a legal procedure. 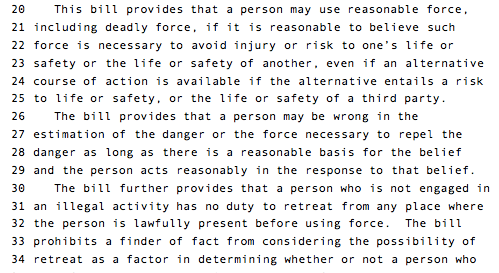 Mark Chelgren has introduced two major pieces of legislation that Iowa’s gun lobby has long desired, and has a good chance of getting passed into law this year. SF 25 lays out the terms of Stand Your Ground, which says you can use deadly force against someone if you are perceived to be threatened, even if there’s an alternative way out of the situation. SF 70 deals more with the use of force inside your home, saying you can use deadly force against someone who has illegally entered your property. Read both of the bills in their entirety (SF 25 and SF 70) to get the full picture.

This is Starting Line’s personal favorite. Are Iowa’s state parks being overrun with people who have three public intox convictions? Are these people so dangerous that they can’t even be allowed on a state park property? I could see banning folks with multiple sexual assault or abuse convictions from campgrounds, but overall is there a huge problem at Iowa’s state parks we’re all unaware of?

This would be a massive redistribution of wealth in favor of the rich in Iowa, putting the burden on providing taxes on middle class families and the poor. It would also make every single thing you buy that much more expensive, often overtaking the savings most households would get from not having a state income tax anyone. It’s a conservative dream, but has massive unintended consequences that end up hurting everyone.

This is the big one. Every single Senate Republican is a co-sponsor of the bill to defund Planned Parenthood, even those from swing districts that are up for reelection in 2018. This bill will attempt to reconstruct Iowa’s Medicaid system by eliminating the current Medicaid family planning waiver system and create a new one largely identical, but that restricts funding from going to Planned Parenthood services (even though no public funds go to abortion already). Read Bleeding Heartland’s piece on this for the full story on why this will prove so problematic, aside from the obvious loss of healthcare options and services for Iowa women.

This bill isn’t that crazy, it’s just funny that Zaun is introducing it again. Hmm, I wonder why the guy who came in first in a Congressional primary, but lost the nomination to the 5th place finisher at the convention, would want to have primary run-offs?

Iowans already have the right to bear arms, but Republicans just want to make extra, super, positively sure. They hope to get an official Iowa constitutional amendment reaffirming the right. This would have to be passed through multiple legislative sessions before it gets on the ballot for a vote. The gun lobby believes this will help strengthen their hand in pushing other gun legislation. The real underlying reason, however, is to help boost Republican turnout when it’s on the statewide ballot.

Brad Zaun thinks if you lose your court case, you should have to pay for the other side’s attorney fees. Anyone with a passing familiarity with the American legal system should see where this gets problematic. Just because you don’t prevail in court doesn’t mean that it was wrong to bring it in the first place. This would punish you for attempting a lawsuit, even though there’s already systems in place to limit frivolous legal action. The end result of this legislation would be extremely damaging to consumer protection. People would be too afraid to sue organizations that have committed fraud because they might have to end up paying for a big company’s expensive legal team.

This study bill gets extra bonus points for essentially telling the Iowa Supreme Court, “Hey, can you write up some legislation to deal with the problems this causes?”

Amy Sinclair has a few minor bills she’s introduced, including this one that would ban people from using food assistance benefits on beverages that have the refund deposit (like the five cents refund for soda cans). Why is this deemed a pressing problem to the State of Iowa by Senator Sinclair? Probably because it’s a common conservative fever dream that poor people are going around, buying up packs of soda with their food stamps, emptying them out, then returning them for cold hard coins at a redemption center, in order to go buy, I don’t know, probably booze or drugs. That’s one convoluted system to misuse taxpayer money, and it doesn’t even really happen in real life. But it’s a chance to demean and vilify people who are struggling to get by in our economy, so that’s why you see these bills get proposed by Republicans from time to time.

As this Des Moines Register story reports, tenure is often misconstrued as a system where you can’t lose your job. That’s simply not the case, but Zaun would like to mess with how universities are run regardless. The funny thing with this bill is that Zaun almost seemed a little surprised that he got a full Register story on it, noting he’d filed this bill many times in the past, but it never got much attention then. Yeah, Senator Zaun, that’s because you were in the minority then, so you could propose whatever you wanted with little risk of it actually passing. Now that you’re in the majority, any of this stuff could. Republicans might want to reconsider whether some of these bills that are often proposed in order to make a political point would actually make good policy if enacted. They have to govern now.