The final days of the 2016 campaign are closing out ugly in Iowa, and not just in how candidates attack each other. An act of homophobic vandalism against a gay candidate in Waterloo and racist fliers on the campuses of Iowa State University and the University of Iowa were reminders that Iowa politics isn’t quite what it used to be.

Chris Schwartz, Democratic candidate for Black Hawk Board of Supervisors, woke up Thursday morning to find his political yard signs and home vandalized.

“I was heading out this morning at about 9am to take my recycling to the curb when I first noticed that signs had been spray painted,” Schwartz says. “As I walked down the stairs on my front porch I saw my sign that had been painted with the word ‘fag.’ I then turned around and saw the ‘Lev 20:13′ had been spray painted on our front door.” That refers to a passage from Leviticus that says men who sleep with other men should be punished by death. That’s why Schwartz considers it essentially a death threat to put such a reference on a gay couple’s door. He and his partner no longer feel safe in their own home, and the local police are now investigating it as a hate crime.

“[W]e have a pro-gay socialist who is to the left of Bernie Sanders, who wants to increase regulation, have a county board increase minimum wage, hurt businesses, employees, and continue to bring debauchery to our community… Does anyone else see a major problem here?” read one of the organization’s Facebook posts earlier this week, referring to Schwartz. “Christians in our community better start stepping up and put a stop to this!” 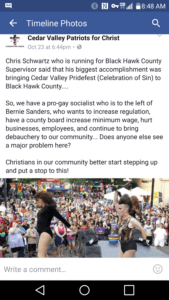 The group also complained about the Cedar Valley Pridefest and Schwartz’s role in founding and organizing it.

“We feel that the timing of the attacks on social media and the hate crime committed at our home are not a coincidence and that at the very least were incited by the hateful rhetoric of Judd Saul and the Cedar Valley Patriots for Christ,” Schwartz believes.

Many locals have rallied to Schwartz’s side in the past week, and the Cedar Valley Patriots for Christ has seen a lot of blowback on their social media pages.

“We want our supporters to continue to take the high road,” he says. “As Michelle Obama says, ‘When they go low, we go high.’ We feel like the most important thing our supporters can do is to help us get out the vote for progressives up and down the ticket by visiting our website SchwartzforSupervisor.com to sign-up to canvass or make a donation.”

Meanwhile, instances of bigotry have cropped up on the campuses of Iowa’s two largest universities. Racist fliers appeared across ISU’s campus, with no real indication of who or what group distributed them.

“White students you are not alone. Be proud of your heritage,” read some of the fliers. Another one read “In 1950, America was 90 percent white. It is now only 60 percent white. Will you become a minority in your own country?”

Similar ones appeared at the University of Iowa’s campus last week, including at student cultural centers.

Every one of the incidents are unfortunate indications of just how badly Iowa’s political discourse and people’s reactions to it have become. Iowa has gone through rough and nasty political races and issue campaigns in recent years, but there haven’t been this many outbursts of public bigotry in such a short time frame. Perhaps once the election passes so too will the extreme passions that are leading some people to do this. But a lot of it will be determined by where the state’s political leaders take the conversation in the months after.