As Donald Trump continues to alienate voters and tank in the polls, Republican legislators in swing districts who still stand with Trump risk their own reelection efforts. Nowhere else could this be as evident as in the Polk County legislative races.

Peter Cownie, who regularly wins reelection by wide margins in the past, has suddenly dumped nearly $200,000 worth of money into ads and mailers. Cownie represents the Polk County part of West Des Moines, and reported $107,645 of in-kind spending from the Republican Party on his race. He reportedly bought an additional $80,000 worth of TV ads in the last week. That’s surprised many Iowa political watchers who figured the well-known Republican would win again in 2016, even if it was a closer race than usual.

Cownie probably conducted a poll that showed him losing to Democratic challenger Claire Celsi. Part of that is likely due to Celsi’s work ethic on her campaign – she’s knocked thousands of doors throughout the district and talked to many voters in-person. But another large factor is likely Trump’s unpopular candidacy dragging down all Republicans in moderate, suburban areas. Trump is faring particularly poorly among college-educated and independent women, a big demographic in West Des Moines. Given how the Republican Party’s extremism and obstruction in recent years gave rise to Trump, there are many voters who are simply sick of the entire party.

None of the three most endangered House Republicans in Polk County have denounced Trump or said they’re not voting for him, as many other national Republican leaders have done. One can only assume that Cownie, Chris Hagenow and Kevin Koester are all voting for Trump.

Hagenow, despite being the Republicans’ House Majority Leader, has found himself in a very tough race with Jennifer Konfrst. His recent finance report showed the party spending an incredible $312,758 on his reelection race, far more than any other House Republican. His Windsor Heights, Clive and West Des Moines district also contains many of the kinds of voters who are fed up with Trump and Republicans this year.

Both Hagenow and Cownie have resorted to personal attacks on their female opponents. For weeks Hagenow has blanketed the airwaves of central Iowa with a TV ad accusing Konfrst of not paying her taxes. It’s a rather misleading ad that heavily implies Konfrst doesn’t pay her taxes at all. It’s also one of the most personal attacks on any candidate being run in Central Iowa – even more notable since Konfrst isn’t an elected official yet. Cownie just started running TV ads that dredge up a decade-old blog post from Celsi in which she complained about a getting a speeding ticket, using it to label her as anti-police.

A Republican Super PAC also sent out a mailer this week attempting to tie Celsi, who has never held elected office, to Obamacare. Amusingly, it calls it the “Celsi-Obama healthcare agenda.” That would be quite the accomplishment for someone who’s never taken a vote on healthcare legislation at the state or national level. 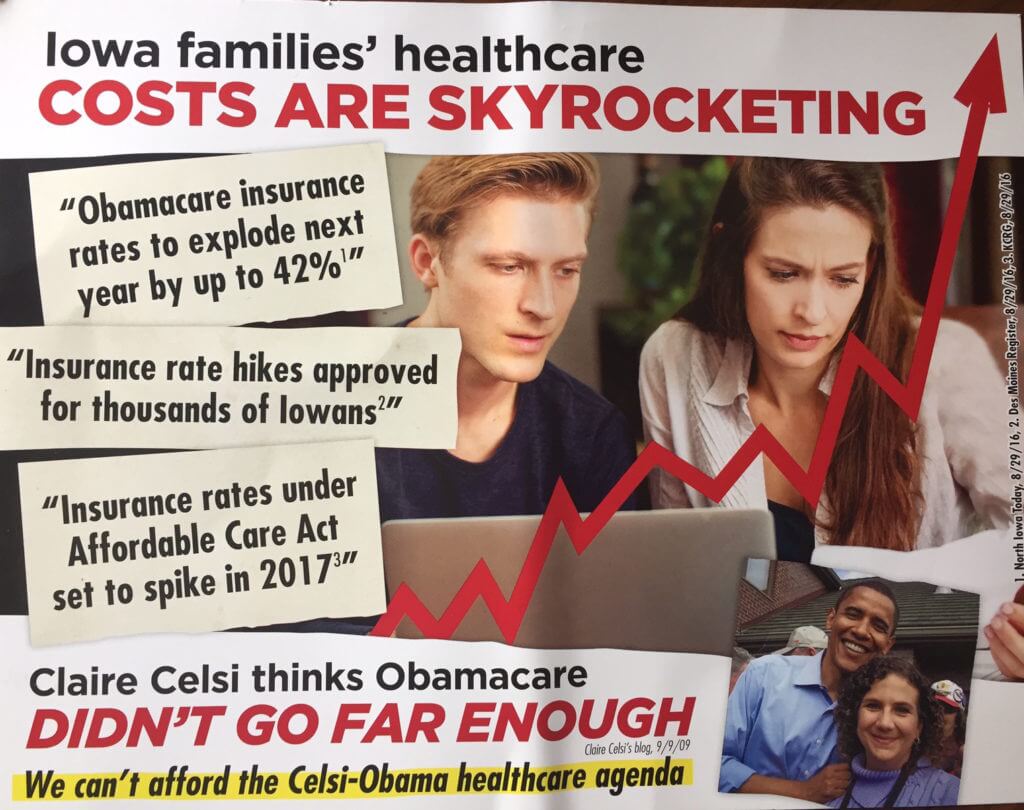 The party hasn’t yet put a lot of money behind Koester’s race in Ankeny against Heather Matson, nor has Koester himself raised much. But the rumor going around the lobbyist crowd this past week is that Koester might now be the most at-risk Republican incumbent. He too represents an area where Republican-leaning voters are most likely to abandon Trump. Voters should watch to see how he reacts in the final two weeks.