That at least must be what the polling shows for a Democratic Super PAC hitting Rod Blum over his support of Donald Trump. Priorities USA, the well-funded organization supporting Hillary Clinton, just released a new ad showing Blum giving a speech where he says, “Send me back to Congress, and you send Donald Trump to the White House!”

The location of the speech is immediately apparent to anyone involved in Iowa politics – it’s at Joni Ernst’s Roast and Ride from September. But viewers might not notice because Joni Ernst’s name has been blurred out from the podium. Here’s the ad:

And here’s what the podium actually looked like (somehow I took pictures of every speaker there except Rod Blum): 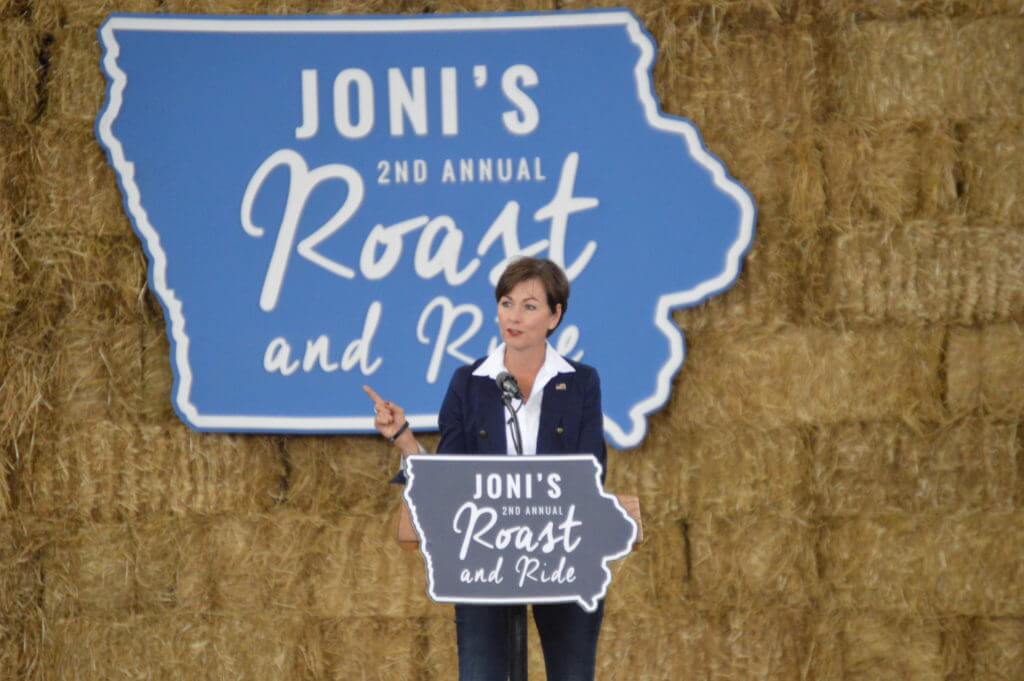 It’s pretty obvious that Democrats are more than happy to tie Iowa Republicans to the flailing nominee, but less so to the still-popular freshman senator from Iowa. It’s not that big of a deal, it’s just humorous that some ad-maker, when putting together this spot had to stop, consider whether Ernst’s name should be in it, and decided to blur it out.

The rest of it does a fine job in linking Blum to Trump. Few Republicans in tough reelection races have been willing to give Trump a full-throated endorsement. So Priorities USA replays all of Trump’s greatest (worst) hits, from mocking a disabled reporter to describing how he tried to seduce a married woman, interspersed with Blum’s endorsement of Trump.

It still remains to be seen how poorly Trump performs in the 1st District. For Trump to be doing so well in Iowa compared to other states this year, he’s likely over-performing in Democratic-leaning Eastern Iowa. But a DCCC-sponsored poll that ran last week showed Clinton up seven over Trump, while Monica Vernon led Blum by one. So Democrats would like to see Blum’s numbers move closer to Trump’s. What probably doesn’t help their effort is Blum being tied to any fellow Iowa Republicans, as evidenced in this ad. The Joni Ernst problem will have to wait for another day.