Voters in Davenport will be stepping over unwrapped Christmas presents on their way out the door to vote for State Senator Joe Seng’s successor, thanks to Governor Terry Branstad’s scheduling of the special election. In an official proclamation yesterday, Branstad set December 27 as the date to choose the replacement for Seng, who passed away late last week.

As one could imagine, holding an election two days after Christmas is a terrible idea for a number of reasons. Many voters will be out of town. They’re not going to want to think about politics around the holidays. The County Auditor’s election staff will likely have to be paid extra to work during the holiday, not to mention it’ll be tougher to recruit the extra workers to man the polls.

But there is one benefit for Branstad: it might give Republicans the slightest bit of a chance to capture one of the most Democratic state senate seats in the state.

The key, of course, is about suppressing voter turnout. Senate District 45 contains more than double the amount of registered Democrats than registered Republicans, 15,209 to 7,582. In fact, with that kind of advantage, even a tricky holiday special election where Democrats will be even harder to turn out will be difficult for the GOP to pull off. But at the very least it will make Democrats spend much more time and money in the weeks after the November election than if it was on a more reasonable date.

But if you read Branstad’s press release yesterday, you’d think that he was unfairly strong-armed into this poor date by the Scott County Auditor, Roxanna Mortiz.

“Gov. Branstad considers Nov. 8th the best date for the special election, which would coincide with the general election, in order to ensure high voter turnout and save Scott County taxpayers the expense of another election,” read the release. “However, Iowa Code allows the County Auditor to prevent a special election from occurring the same day of a general election if the County Auditor believes there are undue difficulties with administering both elections.”

The difficulties of adding Senate District 45 to the this year’s ballot should have been obvious. First, overseas and military ballots have already gone out. So those voters would have been disenfranchised from voting in the election. Second, completely new ballots would have to be printed before early voting starts next Thursday. Mortiz said in her written response to Branstad’s office that her printer told her they might not be able to finish completely new ballots until October 17 (printing election ballots aren’t easy – they’re a special format and have to be tested in the voting machines). And you’d still have to wait for the parties to actually nominate their candidates at meetings of their central committees, which require 10 days notice to reconvene. Mortiz told Starting Line she’d be lucky to see a ballot from her printer by November 1.

So adding Seng’s seat to this year’s ballot would have caused a massive disruption and delayed early voting in part of Scott County for weeks. It would have had national implications for the presidential race as well, as Iowa’s third-largest county’s most Democratic precincts would have had a much shorter early voting window than the rest of the state. The entire thing was just totally unworkable.

It’s even a little questionable whether Iowa code allows that. A section of the election code does specifically say that you can hold a special election for a vacancy on the same date as a general election (I previously thought it had to be held afterwards, but that was for a death of a current candidate – since Seng wasn’t on the ballot this year, a different section of the Iowa code applies). But the code also says that the filing deadlines for the special must line up with the deadlines for the regular election. We’ve already passed the filing deadlines for this general election, so that makes it a bit murky. 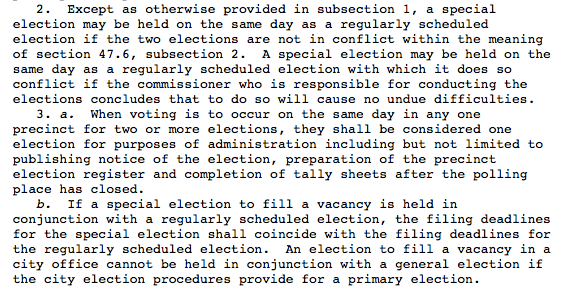 In any event, it’s completely ridiculous for Branstad to try to put the blame on the Scott County Auditor for refusing the general election date. Doing so would clearly have disenfranchised voters and thrown Scott County’s voting process into total chaos.

Branstad also did not have to choose December 27. In his release they frame the choice as being due to a six week blackout period around a general election where you can’t hold a special election. But that six week period covers three weeks before and three weeks after the election. So Branstad actually could have chosen December 6, 13, 20 or 27 (all Tuesdays) as the date for the special. He chose the date most inconvenient for voters.

For a governor whose past legislative session was marked by extreme distrust from Democrats thanks to his 2015 vetoes, it seems like Branstad is preemptively poisoning the well for 2017 with unnecessary partisan maneuvers for post-general election.