Senator Chuck Grassley celebrates another year of 99 county visits today, finishing his final event in Anamosa in Jones County. But just how meaningful or authentic is the so-called “Full Grassley” that Iowa’s senior senator is so well-known for?

This summer a report from Progress Iowa investigated how Grassley mixes private events in with his public events during his 99 County Tour. It found that during his current term in the Senate, Grassley had not held a single public event in eight of ten of Iowa’s most-populated counties. For six years Grassley had held only private events as part of his tour in Polk, Linn, Black Hawk, Woodbury, Johnson, Dubuque, Story, Dallas, Jasper and Fayette counties. And the two others in the top ten – Scott and Pottawattamie – hadn’t received a public visit in the past four years. The counties that he’s held no public events in make up a full 45% of Iowa’s population.

Starting Line put together this map to take a visual look at Grassley’s mix of public and private events. Those in shades of red had zero to two public events in the past six years; those in green had three or more.

When pressed on this disparity, Grassley explains that his 99 County Tour has always been a mix of the two formats so that he can better meet constituents. In addition to his public town hall forums – often held in county courthouses or community centers – he also holds private events at local businesses, schools and community group meetings like Rotary Clubs. Grassley says he ends up speaking with a lot more people at many of these events, especially when his visit is during the workday.

And to a certain extent, that reasoning does make sense. If you’re hitting all 99 counties, you obviously can’t have all breakfast meetings or evening events where more workers and students could attend. You’re going to have lots of 11:00 AM and 1:30 PM meetings where you might speak with more people at a large business or at a school. And Grassley still holds his Q&A sessions at these places and is always open to press interviews after every stop (though it may be awkward for employees to ask tougher questions of Grassley with their bosses standing nearby).

However, the issue here is that he’s very clearly manipulating his schedule and the private event rationale to consistently avoid Iowa’s largest counties. Why avoid public ones there? Because they’re also the state’s most-Democratic and where Grassley is most likely to encounter resistance to his hard-right shift in the U.S. Senate these past six years.

Take a close look at the map above. The largest concentrations of red are around the Des Moines metro where large groups of progressive-leaning activists could show up to an event, and out in Democratic-heavy Eastern Iowa. The most green areas – where Grassley has held more public events – are in reliably-Republican Southwest Iowa and in many less-populated counties.

Compare it to the county results map from the 2012 election results. It doesn’t track perfectly, but you can see an overall trend of Grassley sticking to mostly-Republican areas of the state: 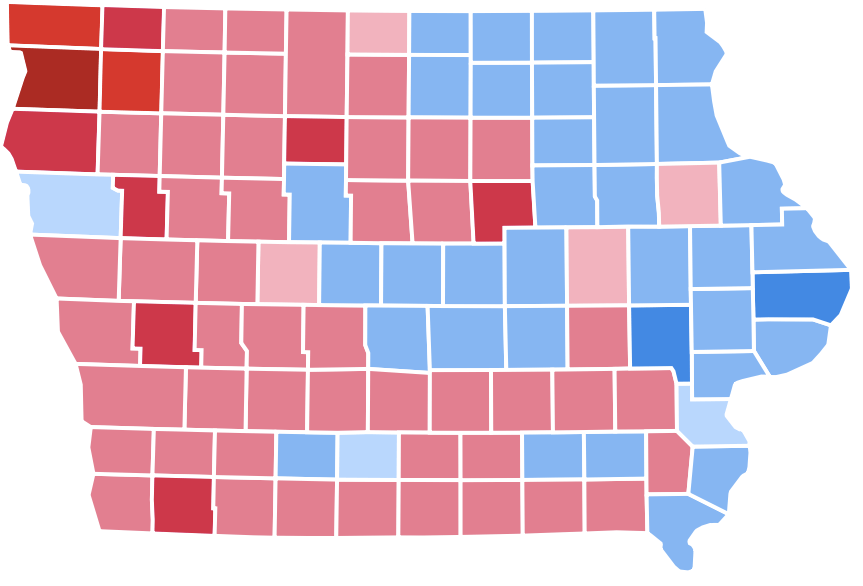 What it seems like Grassley is trying to do is avoid a situation where he’d have to confront a large crowd of people who disagree with him. Yes, he may get a few more detractors than usual in places like Democratic-leaning Winneshiek and Marshall counties where, to his credit, he has held several public meetings. But he doesn’t run the risk of upset voters packing the room in those places like they could in Cedar Rapids, Iowa City, Des Moines, Waterloo or even in nearby places like in Dallas and Jasper counties.

Grassley has also noted at his town hall meetings this year that while he’s seen some voter push-back for his Supreme Court stance, he’s seen similar waves of anger from voters in the past. One of those other times was in 2009 with Obamacare. Democratic senators got the brunt of that anger from the early Tea Party supporters, creating many made-for-TV moments at town hall meetings. Missouri Senator Claire McCaskill saw a series of extremely contentious meetings where hundreds of conservatives turned out to yell at her.

Perhaps those images weigh on Grassley’s mind when these public and private 99 County Tour meetings are scheduled. How would it look to the Republicans’ effort to obstruct President Barack Obama’s Supreme Court nominee if the man most responsible for it had 400 people in Des Moines shouting at him?

Now, this is certainly all Grassley’s prerogative, whether to hold public town halls in major population centers or not. Most senators don’t come close to traveling their state as much as Grassley does. But he shouldn’t be presenting himself as this open and accessible public servant to all of Iowa’s citizens when he clearly is intentionally avoiding nearly half of them. If anything it represents one more way in which Grassley has moved to the extreme right and no longer embodies that respected statesman image that so many Iowans liked. His travel schedule this past six years reflects his voting pattern during the same time: he only cares about representing the people who agree with him.