A lot happened at Ernst’s 2nd annual Roast and Ride this weekend, where Donald Trump headlined with an immigration-heavy speech. What stood out to me, however, was Ernst herself and how she gives off a sort of effortless charm at these events. She really has an unmatched charisma that no other Iowa politician can claim.

Democrats in Iowa like to tell themselves that Ernst is a nutty, unserious extremist who will be a welcome target for defeat in 2020. They should spend some time around her. They’d find a much more complex and compelling politician than the image they’ve boiled her down to from the hog-castrating TV ads or the bread bags comment. The Senate’s first female combat veteran isn’t just another Republican politician – she has the potential to become a historical figure in Iowa, and possibly the nation.

The freshman Senator rolled in early to the Big Barn Harley Davison center on her motorcycle, took off her helmet and proceeded to greet and chat with supporters for the next two hours. Underneath her Harley Davison riding jacket she sported a leather vest with pins for the Army, ABATE (the Iowa motorcycle political advocacy group), American and Iowa flags and a rising sun that was her combat patch for the 41st Infantry Division of the Oregon Army National Guard, which she served under in Iraq. Her salt-and-pepper hair color obscured the fact that she’s only 46-years-old, but her energy and enthusiasm certainly didn’t. She fit in perfectly with the biker crowd in both style and demeanor, more a kindred soul than political celebrity, even with the unending line of well-wishers that formed to chat with her. 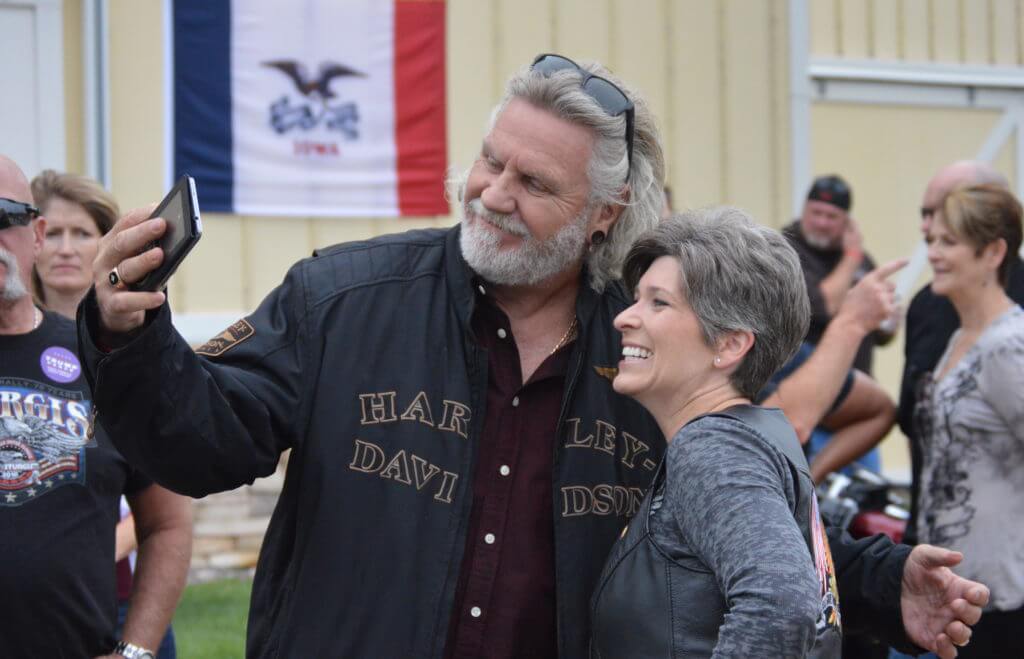 Ernst was mostly greeted with simple, appreciative comments for her service in the National Guard and the Senate. Barely anyone brought up specific policies with her – most just wanted selfies and to discuss family members who serve in a military branch. Ernst repaid most supporters with a big hug or a comforting hand on their shoulder or back.

And she smiled. Constantly. She held one wide, shiny white-teethed grin for a full thirty seconds as she sat on her motorcycle waiting for the signal to head out. But it didn’t seem forced, even in photo op situations. She was legitimately having fun all day (although who wouldn’t when you’re leading over 400 biker friends on a ride around Des Moines?), and that joy was infectious to her fellow riders.

It became quickly apparent just how close and warm a connection these people felt with a U.S. Senator that many of them were meeting in-person for the first time. Joni Ernst is loved in a way by her supporters that no other popular Iowa politician – not Terry Branstad or Tom Vilsack, nor Chuck Grassley or Tom Harkin – ever enjoyed.

That presents a big problem for Democrats looking to regain Harkn’s former seat in 2020: how on earth do you defeat a Senator so naturally good at connecting with voters? And even if she doesn’t poll quite as well statewide as other, longer-serving electeds yet, her volunteer base seems the most passionate of any Republican’s in the state (younger and more female too). Her Roast and Ride brought in 1,800 – smaller than the crowds at a Harkin Steak Fry with similar big-name guests, but it’s a tradition that will only grow with time.

What could knock Ernst off her game? She’s taken a strategically smart and cautious approach to her first term in the Senate, sticking mostly to non-controversial issues like veterans’ health care and agricultural assistance. She’s still cast plenty of unpopular votes, they just haven’t gotten much publicity yet.

On the political front, Ernst played it safe in the presidential race, opting against endorsing her friend Marco Rubio, but still takes her high-profile opportunities when she can, including the State of the Union response just two weeks after being sworn in. She continues to embrace the “Make em’ Squeal” persona from her campaign ads, which seemed at first like a potential liability that could make her seem goofy and unserious, but for which she has seemed to pay little to no price for two years later.

Her far riskier embrace of Donald Trump is a more-recent development, and one she seemed backed into rather than sought out. Ernst sounded cautious notes on Trump as he secured the nomination, and didn’t really seek out the vice presidential nomination that Trump vetted her for (though Branstad pushed her name often). She essentially politely turned Trump down before the offer could even be made, but by then her connection with the divisive nominee was sealed.

That’s the biggest danger for Ernst going forward: her star has risen so fast that she risks getting attached to the worst of an unpopular and extreme national Republican Party before solidifying her standing among Iowa swing voters.

You could see this play out as her Roast and Ride on Saturday progressed. She repeatedly stressed that the “Ride” part of the program was apolitical – the funds raised on that part of the function went to a nonprofit organization that helps wounded veterans. Ernst seemed particularly at ease in the morning for that part.

When asked by the press about the rhetoric of the presidential campaign and Trump’s controversial hire of Steve Bannon, she distanced herself.

“I don’t like this in campaigns. I wish that both of our candidates would tone it down and start focusing on policies and issues,” Ernst told reporters, adding that she “probably wouldn’t” hire someone accused of anti-Semitic statements.

Then came the “Roast” portion, where dozens of national reporters followed up with more pointed Trump campaign questions. Her speech on stage largely took aim at Clinton, with only some words of praise for Trump. Humorously (and revealingly), there were no pictures of Trump, the Roast and Ride’s headliner, on Ernst’s Roast and Ride social media accounts.

And then came the really awkward moment. After a large applause line from the audience, Ernst, Branstad, Kim Reynolds, Steve King and Jeff Kaufmann all joined Trump on stage for a unity picture, even though Trump was still in the middle of his speech. The group stood by awkwardly as Trump continued his speech, and there Ernst was, sandwiched between Trump and King as the bombastic nominee laid out his radical immigration policy. Expect to see that image replayed ad nauseam in negative TV commercials against Ernst in 2020.

But how much will the specter of Trump still haunt Republicans in 2020 if he loses this year? And will Ernst be forced into delicate dances with other extreme national GOP figures in the future? It’s not like the Republican Party is going to instantly revert to some sort of Paul-Ryan-intellectual-conservative utopia following a potential Trump wipeout. The crazy is here to stay, and Ernst’s growing national profile ensures she’ll have to deal with more GOP leaders ill-suited for “Iowa nice” politics.

Still, even with those potential pitfalls, Ernst remains a formidable figure for Republicans in the years to come. She will have a passionate, die-hard volunteer base of both your regular activists and irregular ones – like the 400+ bikers who followed her on the road Saturday – and a national following eager to see her succeed. 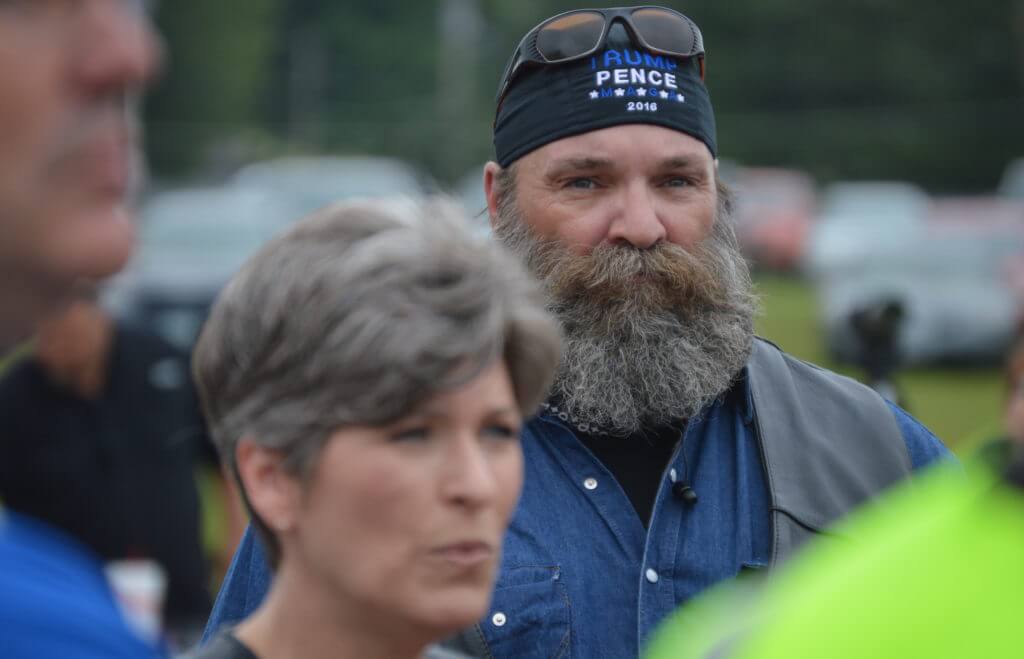 If Democrats want to have a chance at knocking off Ernst in 2020, they’ll need to do a lot better planning than they did for Grassley’s race this year. The thinking of Iowa Democrats’ top leaders this cycle seemed to be, “Oh, I guess Rob Hogg is running, good luck to him. What’s that? Grassley is actually vulnerable now? Uh, let’s see, hey Patty Judge, how about you come off the bench real quick.”

It will require grooming a candidate for years (or several – primaries aren’t bad), getting them connected with national donors and building a robust political operation to give them a strong base of voters and volunteers.

Otherwise, the best chance for Democrats to rid themselves of Joni Ernst is to hope she gets picked as the vice presidential nominee in 2020 on a ticket that loses. Anything less than a long-term, concerted effort means Ernst will be near-impossible to beat in her reelection.

If Iowa Democrats don’t want to see Ernst as an Iowa Senator for the next 40 years, they need to stop being so snooty about castrating jokes and shut up already about bread bags. Joni Ernst is the most compelling, polished and smart politician Iowa has produced in a generation. Time to take her seriously.

11 Comments on "Can Democrats Ever Hope To Defeat Joni Ernst?"