When voters go to the polls in the Northeast Iowa counties of Allamakee and Clayton this year, this is what they’ll see in the Democratic column of their ballot:

Voters in Marion and Dubuque will see similar all-female tickets from the Democrats. In Marion, Senator Liz Mathis and State House candidate Molly Donahue are on the ballot. In Dubuque, Senate President Pam Jochum and Representative Abby Finkenauer fill out the down-ballot slots.

Those three districts make up a particularly historic ballot for Democrats. Two of them – the Northeast and Marion-based districts – are ground zero in the battle for control of the Iowa legislature. In Dubuque, the two legislative candidates have already made history – Jochum is the first Democratic Senate President, while Finkenauer, at age 27, is the Democrats’ youngest member at the Statehouse (both have easy reelection efforts).

For Finkenauer, it’s a welcome – and quick – change. In 2014, after defeating two men in a hard-fought primary, she was on a Democratic ticket of all men (most of whom above her lost). This year is different.

“Just within two years, the second general election ballot I’ll be on looks completely different,” Finkenauer told Starting Line. “This year, every single office down to mine has a woman in the Democrat slot. That means something. I believe in equal representation of men and women in government and women have a lot of history and ground to make up. This year, we are making one heck of a push up that hill.” 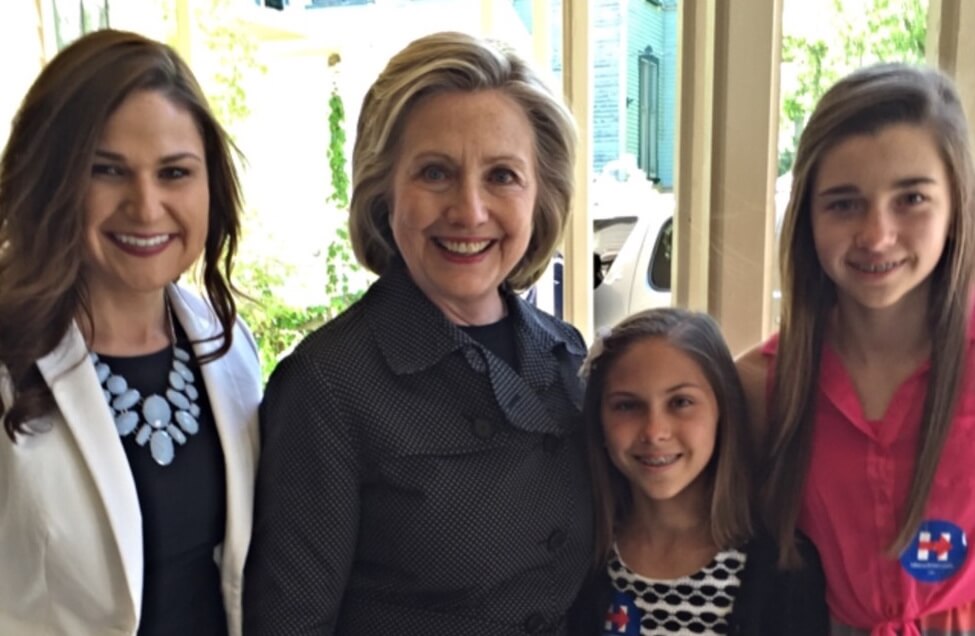 Hillary Clinton’s candidacy has already shattered glass ceilings as the first female nominee of a major party. But she’s not alone in making history.

Democrats were particularly frustrated in 2014 when Republicans beat them to electing the first female federal elected official in Joni Ernst – only Iowa and Mississippi were yet to do so. This year they have an excellent chance to elect a woman to Congress in Monica Vernon, Democrats’ nominee in the Democratic-leaning 1st District, which covers Cedar Rapids, Waterloo and Dubuque. Her opponent, freshman Republican Representative Rod Blum, has been listed as the most-endangered Republican in the country by several news organizations.

Her candidacy, along with Patty Judge’s run for the U.S. Senate against six-term Chuck Grassley, presents a situation where the top five Democratic candidates are all women in three State House districts. There’s elsewhere in Iowa, including in Western Iowa with Congressional candidate Kim Weaver, where there are four Democratic women at the top, but only in Vernon’s district where the state senate map lines up nicely are there five.

In some places, like in Representative Patti Ruff’s district, there’s even more.

“This is an amazing year. It really makes you take notice of the surge of women running for office,” Ruff said. “For example, in Clayton County, most voters have the chance to elect seven women, up and down the ticket. That’s incredible!”

Ruff, from McGregor, was first elected in 2012 and held this Republican-leaning district of rolling hills and Mississippi river towns in 2014. Her success and work this year will have a pivotal impact on the state senate race above her, where Decorah Democrat Jan Heikes looks to knock off Strawberry Point Republican Michael Breitbach. Democrats must pick up this seat held by freshman Senator Breitbach – who won by a mere 17 votes in 2012 – to hold onto the senate if they end up losing a Democratic-held seat elsewhere.

“I’m excited about the number of women running for office this year, and I’m excited to be a part of it. Government will never be truly representative until it actually reflects the people,” Heikes, who has worked in the mental health field, said. “The presidential election is getting a lot of coverage in the news, but when I have been out talking to voters, I think it’s the issues that really effect families here in Iowa that people really care about: school funding, access to healthcare and mental health, jobs.”

Both candidates in Northeast Iowa realize the historic nature of this year and keep it in perspective while campaigning.

“Being born in 1972 gives me a different perspective than women who came before me or after me,” noted Ruff. “I was lucky with the way my parents raised me in believing that I could be anything that I wanted to be. I feel very fortunate in that respect. This election year and watching Hillary Clinton accept the nomination really struck a chord with me.”

Another key battleground for the Iowa Legislature this year lies in the Cedar Rapids suburbs. There Democrats hope frustration among Republican women and independents with Donald Trump will send more voters to Democratic candidates than usual. They’ll need all they can get, as Senator Liz Mathis looks to fend off a tough challenge from Republican Rene Gadelha, and Molly Donahue hopes to upset Republican incumbent Ken Rizer in the Marion-based swing district.

The female candidate movement isn’t limited to Democrats, though. Gadelha and Ashley Hinson, the GOP House candidate in the other part of Mathis’ district, would add to the ranks of Republican women legislators.

This will actually be Mathis’ third female opponent since her first special election win in 2011 over Cindy Golding. Her first rival in her 2012 race was a woman as well – Randi Shannon, who dropped out mid-campaign to become a “U.S. Senator” in a completely made-up Tea Party shadow government (true story).

Mathis, a well-known former TV anchor, has been a big target for Iowa Republicans, who fear she could be a strong statewide candidate for Democrats in the future. She’s been out front this year on holding Governor Terry Branstad’s Medicaid privatization plan accountable.

On the House district side, Donahue’s day job puts her at the confluence of all the issues Iowa voters are most upset over with the Republican governor and legislators.

Donahue is seeing an opportunity with Marion voters who once leaned Republican. Trump’s bombastic candidacy and past commentary on women aren’t just driving voters to Democrats – it’s driving them specifically to female candidates. The presence of all-female Democratic tickets benefits everyone, from Clinton on down.

“Because of what is happening on the other side of the aisle, it’s changing the views of a lot of people,” Donahue said. “We’re knocking on independent doors, we’re knocking on Republicans, because this is such a different year. There’s a different feel out there. We’re talking to everybody, and have been well-received.”

The campaigns of Mathis and Donahue have worked closely with Vernon’s, whose home base is Cedar Rapids. Mathis and Donahue share an office in the Linn County Democrats’ office, with Vernon’s staff down the hall. They’re often at fundraisers together and go out for lunch as a group to discuss their campaigns. Judge, who made history many years ago as Iowa’s first (and still only) female Iowa Secretary of Agriculture, joined them for a fundraiser Sunday night.

It’s an open question how many of these contenders will pull off victories this year, with the volatile presidential campaign likely to play a key part.

But Iowa Democrats aren’t just excited about their female candidates, they’re counting on them. More than half of Democrats’ best pick-up opportunities lie with them, including Heather Matson in Ankeny, Jessica Kean in Maquoketa, Jennifer Konfrst in Windsor Heights, Claire Celsi in West Des Moines, Donahue in Marion and Heikes in Decorah.

Still, while the White House may finally be run by a woman next year, there’s still a long way to go at all levels of government to get close to gender parity. If things go well in these Iowa districts, it will move the ball forward in a significant way for Iowa women.

“Who knows? Maybe after this election women candidates will stop getting asked about the ‘old boys club’ in politics and we could just be equal, or male candidates could start getting asked about the ‘sisterhood’ instead?” Finkenauer pondered. “It might take a few more 2016-type ballots to get to that point, but a girl can dream, and hopefully this year sparks more dreams for young women and girls all over Iowa and the U.S.”