Iowa Republican Congressman Steve King appeared on a story on Sioux City’s KCAU TV this Friday, talking about the bill he introduced named “Sarah’s Law.” King explains how his law would change ICE deportation policies in honor of Sarah Root, a young woman killed by an undocumented immigrant while at…

What’s that on Steve King’s desk in that shot?

Is that a Confederate flag? Yep, that’s what is, alright.

Yes, it appears King has a whole little collection of flags on the desk where he works on crafting the nation’s policy. It includes a United States of America flag, a State of Iowa one, the “Don’t Tread on Me” Gadsden flag, a Papal State flag and the Confederate flag. That’s the one used by those folks who seceded from the country and is typically regarded as racist imagery, in case you had forgotten. Also, as an important point of clarification you may also need, the state of Iowa, where King is from, fought on the Union’s side. 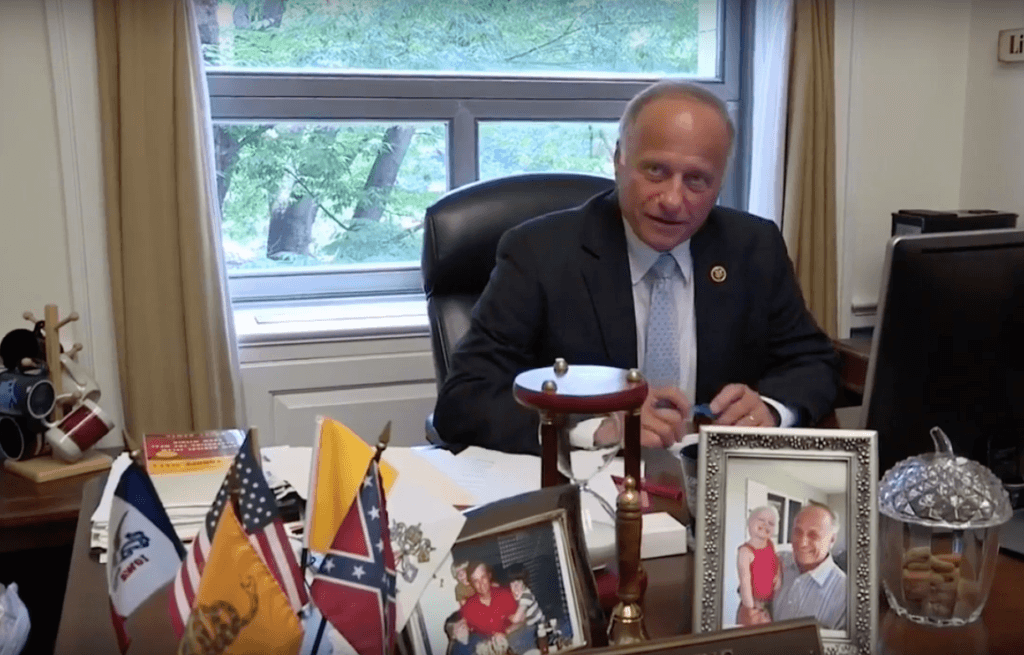 Of course, nothing with Steve King really comes as a surprise these days. And King has defended the displaying of the Confederate flag multiple times in the past.

“I regret deeply that we’re watching this country be divided again over a symbol,” King said in 2015 on the House floor after the Charleston shootings, during a speech defending the Confederate flag. “When I go to Germany, they’ve outlawed the Swastika, I look at them and think, ‘We have a 1st Amendment, that can’t happen here in the United States because we’re open enough’ … They’re saying we should outlaw that so the American people don’t have a chance to see our heritage. Everything about America’s history is not glorious. Everything in our history is not right in our judgement looking back in hindsight … We can accept our history, we can be proud of our history. We can unify our country.”

Notably in previous instances King defended the flag on a free speech basis and on what he feels it symbolizes for those in the South. But defending someone’s right to do something and actively displaying that particular symbol on your work desk is two different things. Perhaps he simply sees his office as a museum, displaying American heritage icons. Though the Gadsden and Papal State flags seem to represent who King is on a personal level, being a Tea Party supporter and Catholic.

It doesn’t appear that KCAU has the piece on their website (TV stations don’t write up an online story for every story they do), but King helpfully posted the video on his own YouTube page. Watch the whole clip here:

Also of note: during that time in 2015 over the discussion of the South Carolina Confederate Flag issue, Republican Party of Iowa chairman Jeff Kaufmann blasted a local GOP county party for using that flag in one of their parade floats. He threatened to outright kick the county party out of the state organization.

Sometimes local activists go astray and do something foolish. But this is one of Iowa Republican’s most prominent members, a seven-term member of the United States House of Representatives, proudly displaying the Confederate flag on his desk in his official office. That should lead to some interesting discussions within the state party, not to mention among voters in the 4th Congressional District.

38 Comments on "Is That… Yep, Steve King Has A Confederate Flag On His Desk"