Each election cycle in Iowa, the biggest campaign battlegrounds center around swing legislative districts. In suburban Linn County, the rural northeastern counties, Cedar Falls, central Iowa around Marshalltown and Newton, along with a few pockets out west, Democrats and Republicans send extra staff, mailings and volunteers. Democrats in particular scour every apartment complex, senior retirement home and college campus to drag out as many voters as they possibly can for these close legislative races that determine control at the Statehouse.

As you can see, Vilsack and Culver’s vote margins in these six counties accounted for about 3/4 of their statewide margin in the winning years of 2002 and 2006. When you fail to run up the totals in those urban centers, as Culver and Braley did in 2010 and 2014, you simply have no chance as a statewide Democrat in Iowa.

Obviously, there are tons of factors that go into each of those races. But we can take a look at how those individual counties are doing with Democratic turnout a different way. Here’s the overall registered Democrats turnout percentages in those four elections (I’m tossing in Woodbury, where I worked in 2010, just for fun):

And a graph for visual purposes: 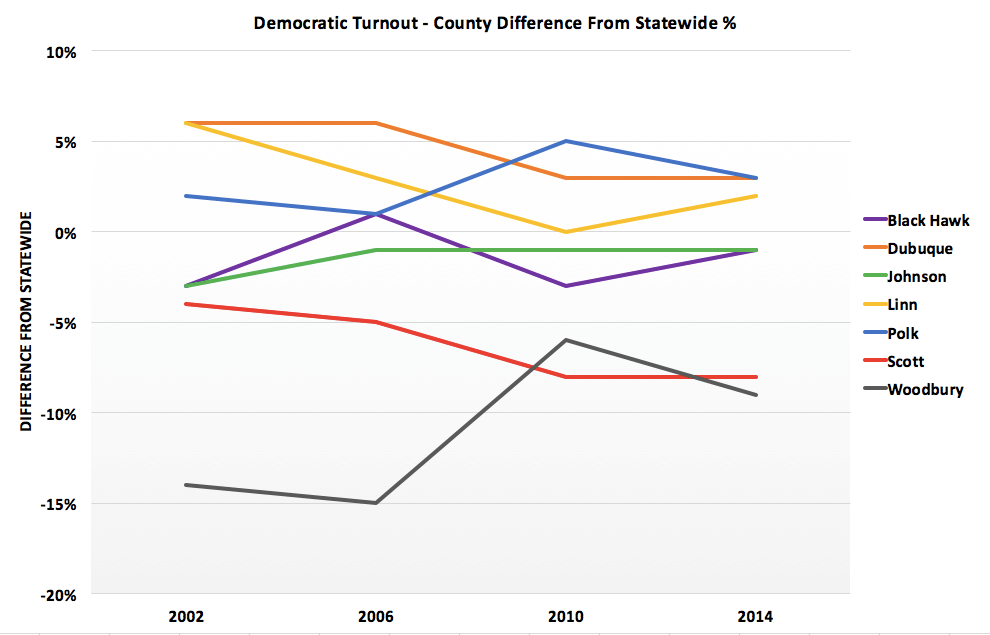 For the most part, there hasn’t been a dramatic change in any county’s performance, save for Woodbury. Dubuque and Linn are slightly worse off in turning out Democrats than they were over a decade ago. Scott County is in a precipitous decline. Johnson has stayed steady, while Black Hawk has bounced around, but usually is just under the statewide average. Polk County has seen an important improvement, though oddly Culver underperformed the most in the year they turned out Democrats the best. And Woodbury has improved dramatically, partially thanks to a recent focus on turning out Hispanic voters and a strong absentee ballot effort in 2010.

Still, in many of the places in Iowa where the most Democrats reside, Democratic turnout is under or just marginally above the statewide average.

So what to do?

Years and years of coordinated campaigns have failed to significantly improve key counties’ performances over the statewide average. But it’s hard to say if anyone’s really at fault over that. The Iowa Democratic Party goes through entire staff changes every two to four years as new chairs come and go. Institutional knowledge often gets forgotten. County parties typically get distracted by their multitude of other organizational duties. Allied groups like labor unions often have a statewide focus, instead of an intense local one.

Here’s my suggestion for what should be done: individual local elected Democrats, representing heavily Democratic districts, need to step up and build their own political machines.

The best way to turn out sporadic voting Democrats is to have a long-term, local infrastructure where year after year, the same local activists are working the same precincts, talking to the same voters, figuring out how to get into the same apartment complexes, and delivering the same absentee ballots to the County Auditor’s office.

But it all has to be organized around one person or one local organization – not picked up by a new 20-something field staffer every two years (no offense to them – besides, any organizer knows how much easier his/her job is when the locals have a go-to list of volunteers). It also has to exist in non-campaign years, building relationships and planning tactics when you don’t have an election deadline looming.

And a key part of this is local and concentrated. A group focusing on 10-20 heavily Democratic precincts can likely have a bigger effect than a county-wide canvassing team just scratching the surface of every precinct, only visiting each one once or twice (you do still need those, of course). Imagine if every time Des Moines or Cedar Rapids builds a new, upscale apartment complex for young professionals, a team member from the local elected Democrat’s operation goes to greet and register them to vote. And then that same person re-visits that place multiple times throughout the election, getting to know the residents on a personal level. That’s a lot better than an IDP canvasser walking by the apartment complex on their list, finding out they can’t get in, and moving on.

Does Iowa have any of these machines? Not really.

The county parties simply have too many other tasks to focus on and sometimes have to commit most of their resources to the swing legislative districts. AFSCME and ISEA have good long-term operations that promote younger leaders and effectively turns out their members, but this is more about complete ownership of a small number of precincts. Kurt Meyer has built a strong network with the Tri-County Democrats, but they don’t have an urban center to turn out.

The only operation in the state that really comes close is “La Machina,” the Des Moines South Side machine run by several of the county’s prominent Italian families. For decades they’ve run a robust, family network-focused absentee ballot program in the working class neighborhoods of Des Moines’ Italian and Mexican communities, though they’re not as influential as they once were (partly because the Italian community has gotten more dispersed throughout town). Some Democratic leaders question their relevancy and win record these days, but I’ve seen their work up close. They have a good operation and certainly make a difference in the numbers, but it’s not enough to win a race completely on its own (as field programs rarely do). The biggest problem is that Machina gets utilized much more in primary races than the general.

That’s a good model to build off of, however. It’s not just a group of your regular party activists who are particularly effective, it’s a network of skilled absentee ballot operatives, some paid, who know the ins and outs of their community.

Democrats need operations like that, actual political machines in their urban, heavily-Democratic counties like Polk, Linn, Scott, Black Hawk and Dubuque. They don’t have to run the entire counties. They just need to significantly boost the turnout in 10-20 of the state’s best Democratic precincts.

The people best suited to create and run that are Democratic incumbents in safe seats. For one, they obviously have a lot of Democrats in their district. In many cases, they represent the Democrats least likely to vote. For another, without the need to run all-out campaigns every two or four years where you also do a lot of persuasion, you have the time and money to do this work. You can hire a part-time organizer to keep things running in the off-years. You can keep an organization of activists and family friends meeting regularly.

The problem is motivation. Why do all this work when you yourself don’t need the votes? Obviously it’s incredibly helpful to the top of the ticket, but that’s not always enough.

But there’s many other ways it can be personally advantageous. We live in the lead-off caucus state. How many elected officials’ endorsements during the caucus brought with them nothing but their own vote on caucus night and a line in a press release? Most of them. Couldn’t you advance your career and your issue interests if your endorsement actually brought with it dozens of volunteers and could single-handedly win a dozen precincts on caucus night for a potential next President of the United States? These people remember Iowans who help them.

And then there’s the legacy to consider. State Senator Dick Dearden sat on a treasure trove of sporadic-voting Democrats on Des Moines’ East Side for years and did nothing. Hispanic voters increasingly made up a larger share of the population in his district, something that would have been great to have a local elected spearhead getting them organized to vote for Democrats. Would his daughter have won the primary to succeed him had Dearden built and commanded a real political operation in his district, instead of only getting excited for things like dove hunting legislation? Probably. Have Joe Seng or Wally Horn done anything in their heavily Democratic districts in Davenport and Cedar Rapids?

There’s tons of untapped potential in key urban, Democratic precincts all over the state. For Democrats to have a real chance of retaking the Governor’s mansion in 2018, or to have long-lasting success on a state level at all, some elected Democrats need to step up and start building up their own political machines in Iowa.

5 Comments on "Which Democrat Will Build Iowa’s Next Political Machine?"