Former U.S. Senate candidate Tom Fiegen has not taken his blowout defeat in this month’s primary very well. After receiving a mere 6.8% of the vote in a four-way primary (a regression from his 9.4% total in the 2010 Senate primary), Fiegen refused to congratulate or endorse his opponents. A few weeks later, he officially left the Democratic Party. Now he’s calling on his voters to reject all Democrats running for office, up and down the ballot.

Fiegen was a vocal supporter of Bernie Sanders during his Senate run. Since the end of the national primaries, some of Sanders’ most ardent supporters have had a difficult time in unifying with the Democratic Party and Hillary Clinton as the certain nominee. But none have seemed to go as far as Fiegen now is – believing that Sanders voters should not only vote third party in the presidential race, but should reject Democratic candidates at the local level as well.

Often throughout the Senate primary, Fiegen declared himself to be the only “pure” candidate, even attacking State Senator Rob Hogg – the state’s most respected advocate for climate change – as a fraud. Now it appears Fiegen thinks all Democratic candidates, whether they’re running for State House, County Supervisor, or school board, are all corrupt. Apparently everyone is a fraud when compared to Fiegen.

Of course, if the “progressive” voters who backed him were to do so, they would be voting against hundreds of actual progressive leaders who have accomplished real results at the state and local level. It would ensure Republicans have complete control over Iowa. And while some of Fiegen’s most extreme supporters think there’s no difference, they would do well to be reminded of the Democrats fighting against Branstad’s mental health closures, for increased education funding and in favor of expanded solar and wind energy.

And in almost all cases they’d simply have no one to vote for. There are exceedingly few third party candidates in local races in Iowa. And most are of the libertarian variety, not the socialist type.

So Fiegen would essentially be taking the great energy and enthusiasm that came out of the Sanders campaign, which has already made a real impact on moving the Democratic Party leftwards (if not completely to their satisfaction yet), and throwing it all away in one big hissy fit.

That type of critical thinking, however, may not be going on in Fiegen’s head these days. His social media posting of late has descended into an ugly stream of rants and re-tweets of angry anti-Democratic nonsense. Among them were suggestions that President Barack Obama should be indicted along with Clinton, a tweet mocking the Democrats partaking in the U.S. House sit-in for gun control, and crude photoshopped pictures of Clinton herself. 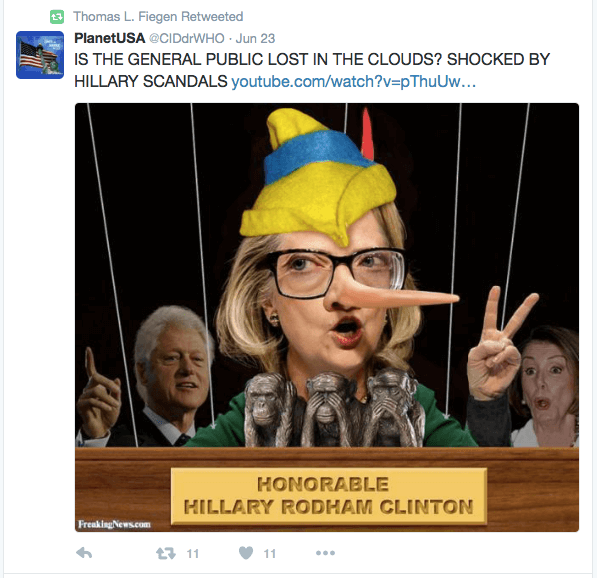 Fiegen has also delighted in using blatantly sexist language and imagery as well since losing out to Patty Judge in the primary. He has called her on social media “BIG Pig Patty Judge.” He’s ostensibly referring to what he sees as her stances on hog confinement operations, but any real progressive would know calling a female candidate a “pig” in any way is incredibly sexist and just plain dumb.

He also seems to enjoy sexist depictions of Clinton, of which he has often re-tweeted: 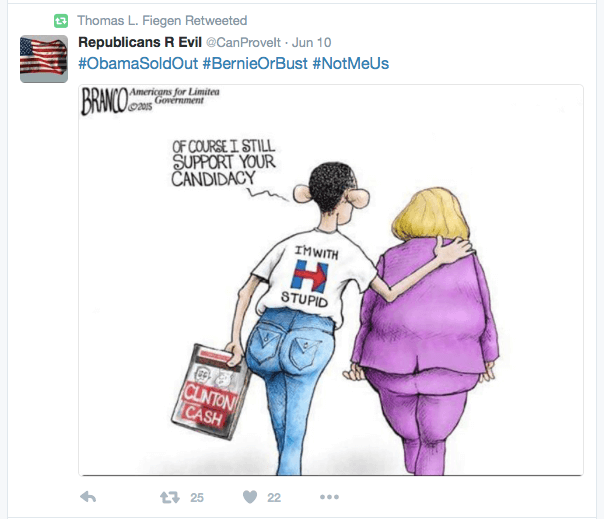 [Edit 7:15: shortly after posting this piece, he had a new round of interesting re-tweets, including this one:] 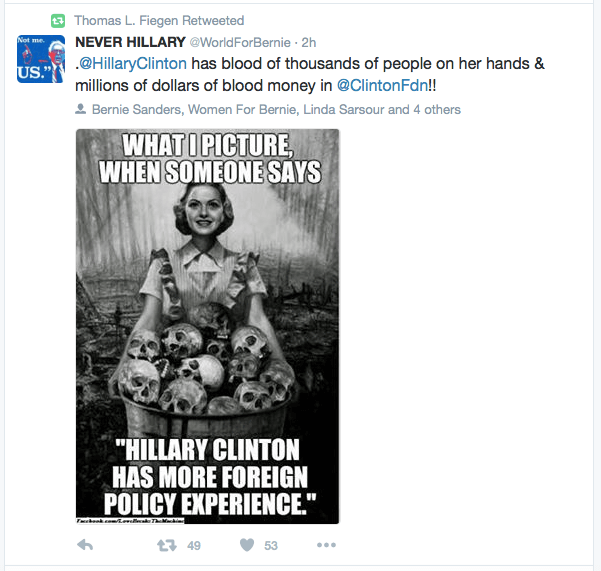 Where Fiegen goes from here is unclear, and John Deeth wonders if he might launch an independent Senate candidacy out of spite. Regardless, it is certain he is now doing much more to undermine the issues he purportedly supports by encouraging people to go on a cynical and vindictive attack against any and all Democrats.

The next question in this annoying saga may go to former Fiegen supporters themselves. He had a few activists in the state backing his bid, including some Sanders supporters who subsequently ran for elected positions within the Iowa Democratic Party. Will they publicly reject Fiegen’s descent into a mission to destroy that very party? And why should any Democrat trust their judgment in leadership roles when they backed such an angry, counterproductive man in the primary?

Hopefully people will learn some lessons from this affair. There were a lot of new, idealistic voters who entered politics this year. Any of us around for a while could have told you that candidates like Fiegen, who insist on their own purity, conduct nasty, ad hominem attacks on his opponents, has a background of pro-life support, and who fails to run a serious campaign is clearly a candidate whose mission will not end well, and who no one should have trusted in the first place.