Every presidential election cycle brings about new organizing tactics on the Democratic side. In 2004 Howard Dean ushered in the era of online grassroots donations. 2008 saw Barack Obama’s campaign develop and hone the neighborhood team leadership model used in so many campaigns now.

2016 may be remembered for the innovative social media organizing tactics being spearheaded by Bernie Sanders’ national volunteer network.

As voters – especially young ones – get harder to contact every year thanks to cell phones and limited-access apartment living, campaigns increasingly look to new ways to reach them online. Sanders’ base is largely in this demographic, so solving that problem has become key for his candidacy. Much of the experimentation with new methods has come from his grassroots supporters.

One of the most interesting new tactics that Sanders volunteers have attempted and experimented with is something they call “Face-banking.” That’s where they contact voters they have various connections with in other primary and caucus states to encourage them to support Sanders. While that sounds simple, they’ve actually refined the method through months of experimenting the same way that professional operations and consulting firms test and develop the best phone and door-knocking scripts.

Reddit serves as a major hub for Sanders’ online grassroots network, where they coordinate their efforts on the r/SandersForPresident subreddit. There supporters encourage others to move from “slactivism” into actual campaign activism. Since it’s largely volunteer-driven, that’s helped create some unique and new online organizing tactics.

Face-banking emerged from this network early this year as a way Sanders supporters around the country could reach voters in upcoming primary and caucus states. The key with Facebook is that you can find friends and friends of friends who “like” Bernie Sanders pages.

Some programming-savvy supporters created the “Bernie Friend Finder.” Users drag a small Sanders toolbar into their bookmarks, then open it when they’re on Facebook. Just a few clicks from that will show you all your Facebook friends and friends of friends who live in a certain state that “like” Sanders. 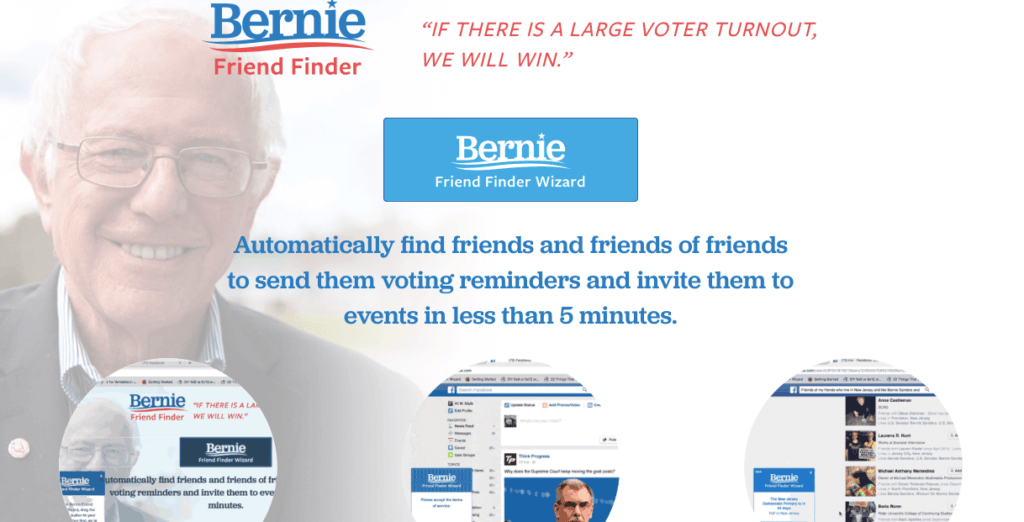 Even though these people are already supportive, Sanders volunteers realize that support on social media doesn’t necessarily translate into actual votes. You have to remind these people of when registration deadlines are and encourage them to vote.

“Facebanking attempts go a step beyond merely measuring sentiment by taking Bernie’s social media advantage and converting this form of passive support into active voter participation,” explains the FAQ on the subreddit.

At first Face-banking revolved around the simple method of sending private messages to friends.

“Initially, I tried private messaging people, friends of friends,” says Teri Gidwitz, a Sanders volunteer from Chicago who runs one of the Illinois Sanders Facebook pages. “Lots of clicking and time consuming.”

But volunteers found that in many cases their messages would get filtered by Facebook if they were only friends of friends of the person they messaged and not get delivered.

So they also tried status-tagging, in which a user writes a positive status update about Sanders, then tags people in it from the Sanders “like” list. That got the pro-Sanders message to pop up in a lot of people’s news feeds, but also draws the attention of Facebook’s spamming policy.

“It was easy and some people were really receptive, but others weren’t and asked me to ‘remove them from my list,’” explains Gidwitz. “And some people must have complained about me (reported me as a spammer) to Facebook as I wasn’t allowed to tag people after using it a few times … I stopped after Facebook’s rules seemed to “catch on” to what I was doing and I didn’t want to end up in Facebook jail again.”

“Essentially they disallow you from tagging people for awhile (10 days maybe), with little warning and they start throwing up photo captchas to prove you’re human. Pain in the neck,” she adds.

The preferred method now is inviting people to large Facebook events about voting. A volunteer would use the specially-generated list of friends and friends of friends in an upcoming state and invite them to an event like “New York Votes For Bernie April 19.” That event would include polling locations and other information on Sanders’ campaign.

The volunteer community has settled on this as their current best practice. It’s less spammy since Facebook users only get a notification that they can ignore if they want, rather than getting tagged in something.

What’s particularly interesting about this grassroots operation is how open they are with their volunteers about the strengths and weaknesses of each method (though no Reddit volunteer leaders responded to requests for an interview). The Reddit page explaining Face-banking goes through the strategy and drawbacks to each option in a way you wouldn’t see in an official campaign office. And leaders in the Sanders Reddit page constantly reinforce that while Face-banking is useful, it’s not meant to replace phone-banking or canvassing. Volunteers are always directed toward those options first, and the Reddit community has put up large phone-banking numbers throughout the campaign.

“Phone banking is definitely encouraged, with a couple of different goals depending on stage of the campaign,” says Gidwitz. “One, qualify potential undecided voters so on-the-ground staff can canvass them. Two, remind them to vote in the days before their election.”

As the nomination battle drags on, the ranks of Sanders supporters swell as more are activated in each state. Iowa volunteers continue to aid the national effort, and many of their early efforts also took on creative approaches.

“We started rather traditionally in Woodbury County; we phone banked and door knocked,” says Jeremy Dumkrieger, one of the Sanders activist leaders in Sioux City. “The strangest adjustment was the new ability to phone bank from home. I could stop by the Bernie office and there could only be three staffers inside. At first, I thought we were losing madly, but with Bernie there was phone banking going on from people’s homes – in town, from other parts of the state, and other parts of the country.”

Especially early on when Sanders was less-known, volunteers needed to find creative ways to get his message out. So they tried everything. Literally, everything.

“We had a rag tag group of about eight hardcore Bernie supporters who brainstormed how to get attention locally and then put into action,” explains Dumkrieger. “Aside from the standard debate parties and trainings, we built floats for the lighted holiday parades, we had chili cook-offs, and an occasional photo booth in which we had people dress up in a Bernie wig and glasses and tag their friends on Facebook. We had street rallies for the Fight for Fifteen, Fight Climate Change, and for Women’s Rights. We also made light up Bernie signs and called ourselves the ‘Bernie Light Brigade.’”

Dumkrieger’s dog got dressed up in a Bernie shirt to add some visibility around the neighborhood, and groups of supporters walked around the local mall in matching shirts as well.

One of their favorite moments came from using the big Bernie puppet that made its way around Iowa.

“We were able to use him dozens of time around town and he made the local news several times,” Dumkrieger says. “He was the main event of our ‘Awaken the Force Weekend.’ I dressed him up like a Jedi complete with a lightsaber and canvassed our local movie theatre during the release the latest Star Wars movie.” 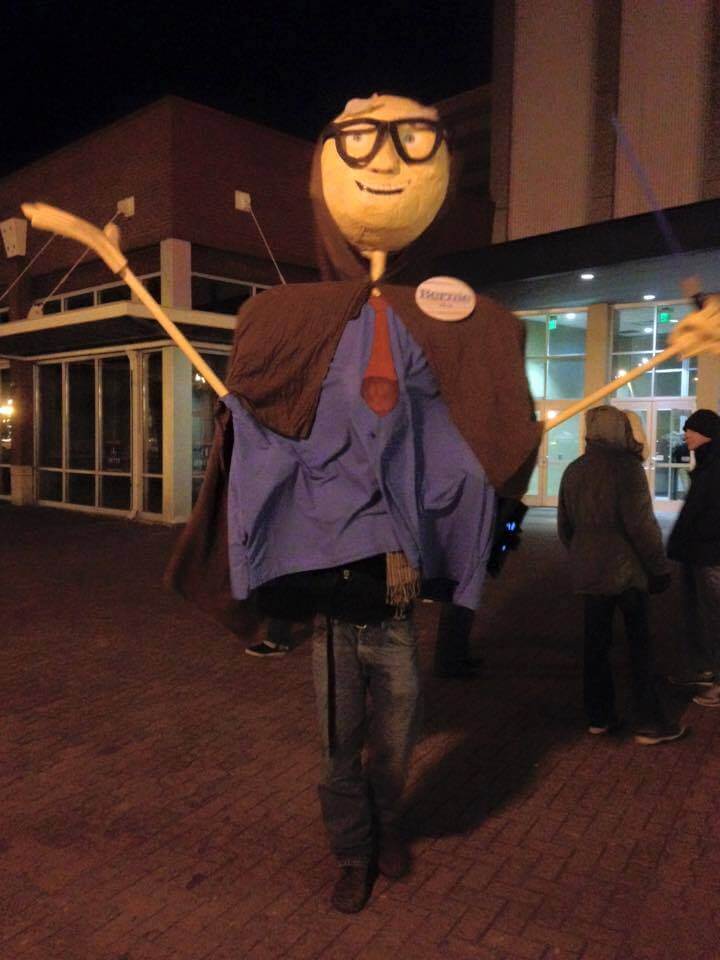 The official campaign liked that idea so much they used it across the state (which was particularly helpful as the movie came out right as the campaign lost their VAN access for two days). The Sioux City volunteers signed up several hundred new hundreds at their showings. Sanders would later win Woodbury County, despite Clinton narrowly taking it in 2008.

Throughout it all, Dumkrieger says the local Sanders staffers were very accommodating of the ideas the volunteers came up with. Phone-banking and canvassing were still the priority, but they realized the utility of the more creative tactics as well.

“With any grassroots campaign comes invention, as necessity is inevitable for someone so ‘unknown’ to Iowan’s like Bernie Sanders,” Dumkrieger says. “Technology changes so fast, I’m sure something new will come along and will change the game again.”

But the Sanders volunteers still realize that they’re blessed with an inspiring candidate. All the creative and innovative tactics they use on social media and locally can only go so far.

“All the technology in the world won’t help a candidate if the message isn’t on point,” says Dumkrieger.