It’s that time in the Iowa Caucus campaign where you can easily run into a celebrity, business leader or famous political figure pretty much anywhere you go in Iowa. This Tuesday afternoon Ben Cohen and Jerry Greenfield of Ben and Jerry’s dropped in to meet customers at Smokey Row Coffee shop in Des Moines on behalf of their endorsed candidate, Bernie Sanders. Sadly, they did not bring ice cream.

What they did bring, however, was a message about why Iowans should get on board with Sanders’ campaign in the Iowa Caucus.

“Our country needs a real political revolution,” said Ben Cohen after shaking hands and taking pictures with Iowans enjoying cups of coffee at Smokey Row. “If you want to just fiddle with the edges, there’s a lot of candidates you can vote for. But nothing’s going to undo the many problems that have been created unless people actually go to the caucus.”

The two Vermont ice cream businessmen have been involved in Iowa and national politics before. Their Sensible Priorities group organized in past Iowa Caucuses, spreading information about national budget spending. They advocated for more social project expenditures and scaling back the defense budget. Iowans will likely remember the Oreo comparisons and big, colorful pie charts they used in demonstrations at events. This writer still has tons of those little red pens with the roll-out charts.

“We’ve never gone out and campaigned for a presidential campaign,” noted Cohen. “This is the only time we’ve ever done it. He’s the only candidate who’s really been worth voting for.”

They also have a special connection with Sanders, hailing from his home state.

“We’ve known Bernie for about 30 years since he was first elected mayor as Burlington,” said Jerry Greenfield. “What’s remarkable about Bernie is how consistent he’s been with his message about inequality, about taking care of the most vulnerable in this country. About how we’re the richest country on the face of the earth, so we can afford to have healthcare and parental leave and paid medical leave and a $15/hour minimum wage. All we have to do is have everyone pay their fair share.”

Greenfield added that Sanders simply isn’t your average politician, and that he’s driven by integrity and values. 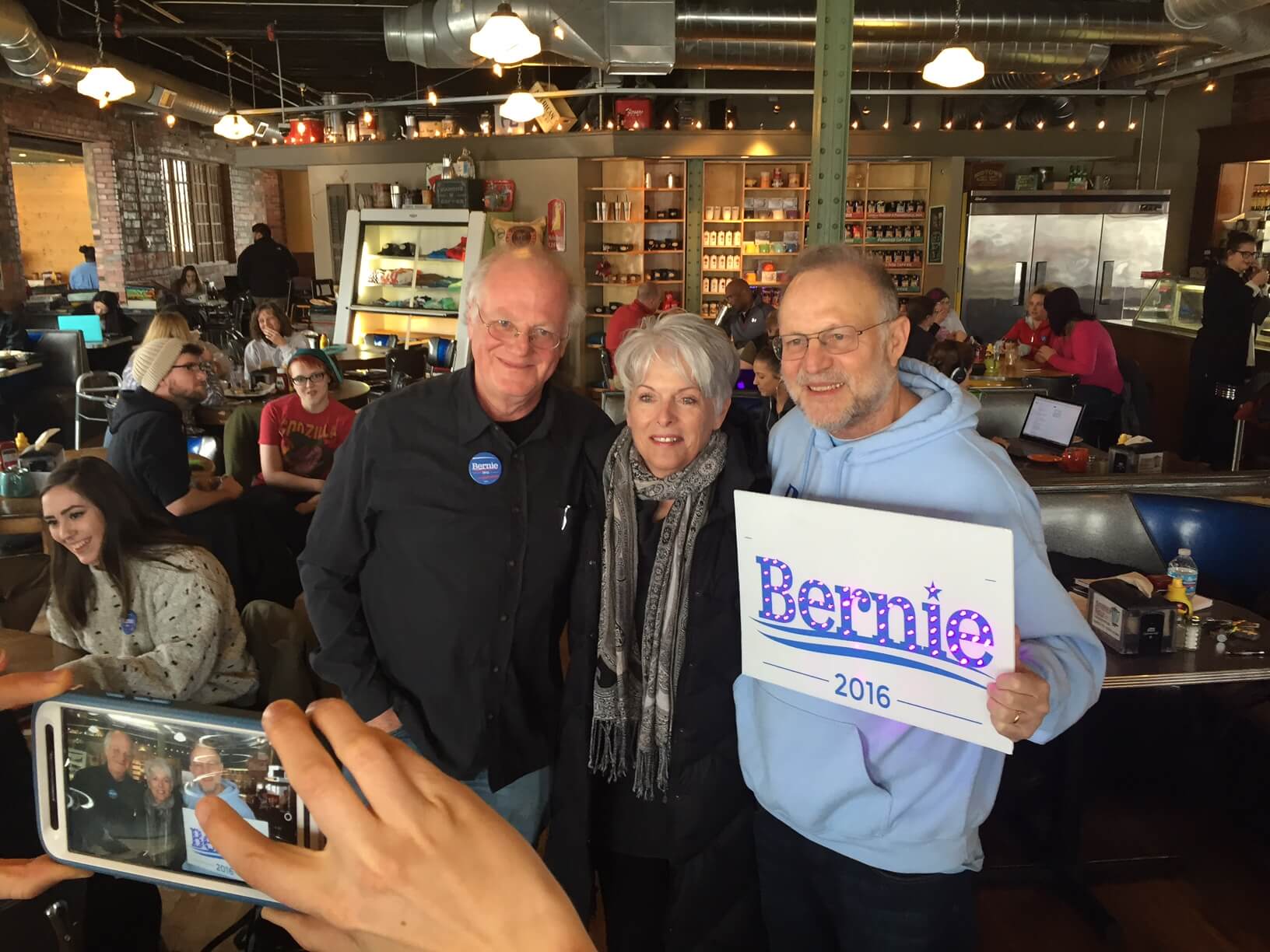 To help Sanders on his presidential run, Cohen came up with a special flavor just for the Sanders campaign. While Ben and Jerry’s the company doesn’t endorse, Cohen decided he could personally make a unique ice cream concoction himself, which he named “Bernie’s Yearning.” And he packed quite a metaphor into one pint.

“It’s a participatory flavor,” Cohen explained. “You take the lid off the pint, you open it up and you see this huge disk of solid chocolate. And underneath is just plain mint ice cream. That huge disk of solid chocolate represents the majority of the wealth that’s gone to the top one percent in this country since the end of the recession. The mint ice cream is the rest of us. The way you eat it is you take a soup spoon and you whack that piece of chocolate into a lot of little pieces, and then you mush it around, spread it out, and there you have it: Bernie’s Yearning.”

“This particular flavor for Bernie tops anything,” added Greenfield. “Not just the concept, the name is fantastic, plus Ben made all the pints himself in his kitchen.”

The two continue their travels in Iowa today for Sanders, including a stop in Council Bluffs.