Ever since Hillary Clinton’s 11-hour performance in front of the House Benghazi Committee and her subsequent rebound in the polls, most national observers had written off the chance for a Bernie Sanders upset in Iowa. There has been good evidence to back up that idea.

Clinton’s ground organization in the state is unmatched in scope, experience and time here. They never took Iowa for granted, with Clinton and big-name surrogates continuing to barnstorm the state for months. She hasn’t slipped up in any major way in the debates or media interviews. Endorsements from labor unions, elected officials and national advocacy groups have gone overwhelmingly to Clinton, leaving Sanders to essentially win all on his own with few allies. And she’s not relying on turning out a wide swath of younger Iowans who have never caucused before. It would appear to an outside observer that Clinton will handily win the Iowa Caucus.

But to accept that conventional wisdom willfully disregards everything being seen on the ground in Iowa. Sanders continues to attract massive crowds everywhere he goes, posting turnouts of 800 in smaller and midsize towns like Ottumwa and Knoxville. Crowds of 1,200 and 800 braved single-digit temperatures to see Sanders at Des Moines-area events this weekend, along with about 400 to 600 in both Marshalltown and Boone. The Sanders campaign expects to hit a total combined attendance of over 50,000 at their Iowa events before the caucus.

Behind the scenes, for a very long time Sanders’ campaign has worked to address his weaknesses and focused new outreach on minorities and seniors. And now Sanders himself has apparently gotten the memo, and is forcefully combating Clinton on key issues in a way that could see him drive the debate for once.

At least one new poll reflects this potential movement. The NBC News poll raised a lot of eyebrows this weekend when it showed Sanders only within three points of Clinton, 45-48%. The last Selzer poll, widely regarded as the most able to detect whether new caucus-goers are going to show up, showed Sanders still within striking distance of 9 points back on December 14th. So he always had the chance to close the gap.

What’s so impressive about Sanders’ staying power – and possibly why he could still surprise here – is that he’s still drawing massive interest despite a near-total lack of coverage in the national media. When a Republican candidate has disappeared from cable news this cycle, their support has typically shriveled up and disappeared. Sanders’ crowds are only increasing in Iowa as caucus night nears.

Many have professed skepticism of Sanders’ outsider campaign, one that has eschewed many more traditional strategies of courting influential organization’s endorsements and doing basic press outreach. So too have they focused in on many voters unlikely to vote, much less go to a caucus. But something sure is working.

Behind the scenes something is still propelling Sanders enthusiasm, mostly from a mix of social media, word-of-mouth and good organizing work from the Sanders campaign. And that hard work could bring him close. But it’s always seemed like there needed to be a little extra of something to give him the final push, and we may be seeing it on Sanders’ current trip through Iowa.

Sanders himself has undergone a very important, if subtle, shift in his own campaigning. For the entirety of 2015, Sanders insisted on sticking his focus solely to his overriding message of economic inequality. That caused issues for him at times, like when he awkwardly blew past discussing the Paris terrorist attacks in the second Democratic debate. And it hindered his ability to reach out to other important constituency groups within the party who don’t view that as their main issue. Most of all, his steadfast devotion to those talking points kept him out of the national news cycles.

That’s no longer the case. Sanders was more than eager to engage on the topics of the day both with reporters and in his speeches. And there were three notable new additions added to the top of his rally speeches: electability/polls, social security and guns.

On the electability front, Sanders’ Ankeny rally sounded positively Trump-esque, with Sanders starting his speech by rattling off a number of recent polls that showed him beating Republican candidates by a wider margin than Clinton. At a press conference with reporters after his Marshalltown event, Sanders tore into Clinton’s recent ad claiming she was the one who could best beat the Republicans.

On guns, Sanders brought up the issue that has proven tricky to his progressive appeal early on in his speech. He recounted at several events how he lost an election in 1988 because he opposed the NRA on the assault weapon ban, and mentioned his “D-” NRA rating.

“I understand that in the last weeks of a campaign, a panicky Clinton campaign suddenly now says Bernie Sanders is a stooge of the NRA. Well, some stooge! I’ve got a ‘D-‘ lifetime voting record from the NRA,” Sanders told reporters.

And senior issues now feature more prominently in his speech as well. He held an event specifically on the topic at a senior community center in Newton on Saturday, but also made sure to hit up Social Security and his plans to expand it near the start of every other event. His new lines highlight how few seniors can really get by on $13,000 or $14,000 a year from Social Security. He also makes sure to recount his story of when he took seniors in a bus over to Canada to buy cheaper prescription drugs.

Throughout his entire trip Sanders also showcased a much more combative tone with the front-runner Clinton.

“This program – it’s not free – would cost the average worker about $1.61 a week, about 80 bucks a year,” Sanders said in Ankeny in discussing paid leave, attempting to turn one of Clinton’s key issues into a weakness for her by pressing her on a plan to pay for it. “Three months, paid family and medical leave, I think that’s a good investment, I would hope Secretary Clinton joins us in fighting for that proposal.”

He brought Clinton up by name multiple times throughout his rallies, something he very rarely did before.

“I would hope very much that Secretary Clinton would come on board and work with us on opposition to that [Bakken] pipeline,” Sanders said in a section on climate change. 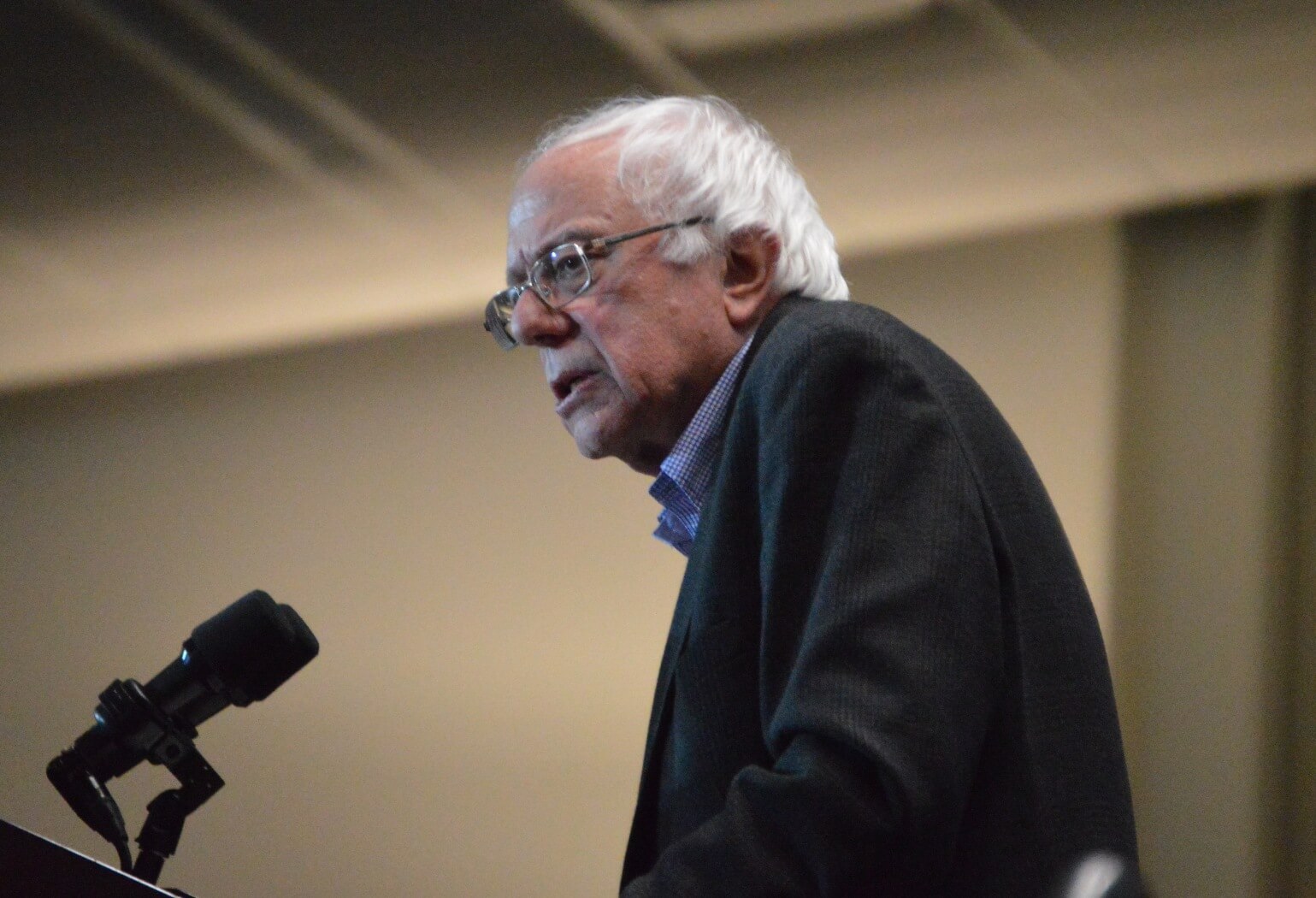 Indeed, Sanders seems like a real candidate now, not just the unlikely leader of a progressive movement hoping to get economic inequality more into the national political discussion. He’s forcefully pushing back on potential weaknesses and taking sharp aim at the front-runner he needs to surpass here in three weeks.

A betting man should probably still put their chips on Clinton’s organization and lead in Iowa, at least right now. But many national reporters should be taking a closer look into Sanders’ momentum and Iowa operation. Because if you add Sanders’ newfound personal campaigning focus to his already strong and motivated base of supporters, we could be headed for a surprise upset on caucus night.