Drake University and Iowa Democrats are getting ready for the big event on campus in Des Moines today. The second Democratic presidential debate is tonight, hosted by CBS News, KCCI, the Des Moines Register and Twitter. The day, however, has taken on a more somber tone in the aftermath of the horrific terrorist attacks in Paris last night. The questions asked and strategies of the candidates tonight are likely undergoing changes right now.

Starting Line has been roaming Drake’s campus for much of this week, taking in the spectacle and talking with students about the excitement surrounding the hosting of a nationally televised Democratic debate. Drake hosted debates in the past, but none were as high-stakes as tonight is, considering how few debates are scheduled this cycle.

Here are some of our photos from today and earlier in the week:

Drake’s Sheslow auditorium has been transformed into a debate stage. One can only imagine the amount of money spent by the sponsors to create all this: 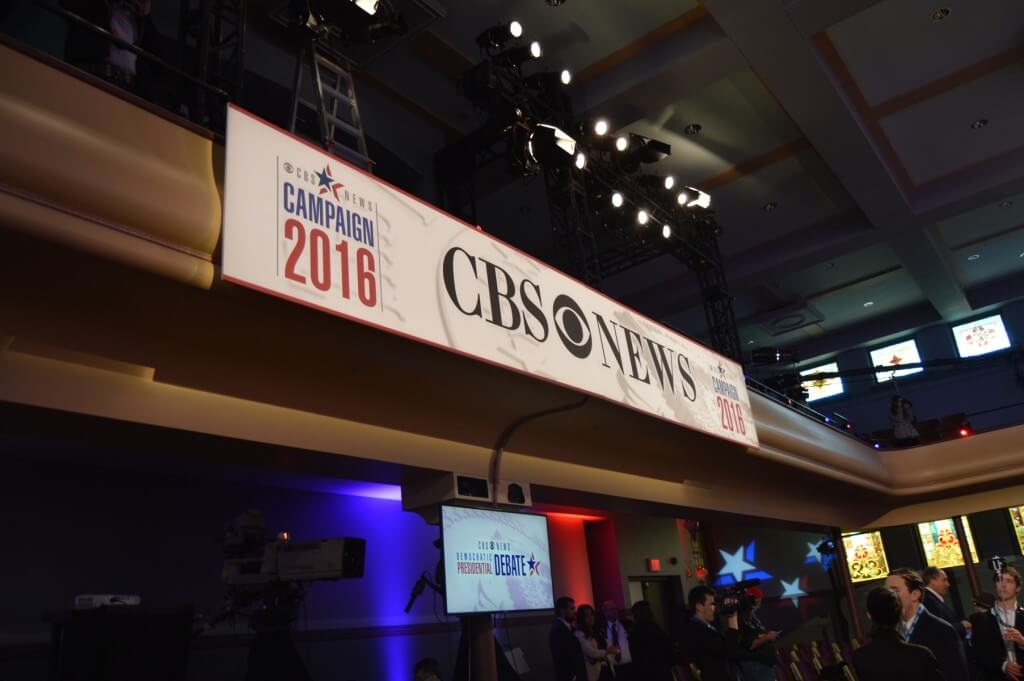 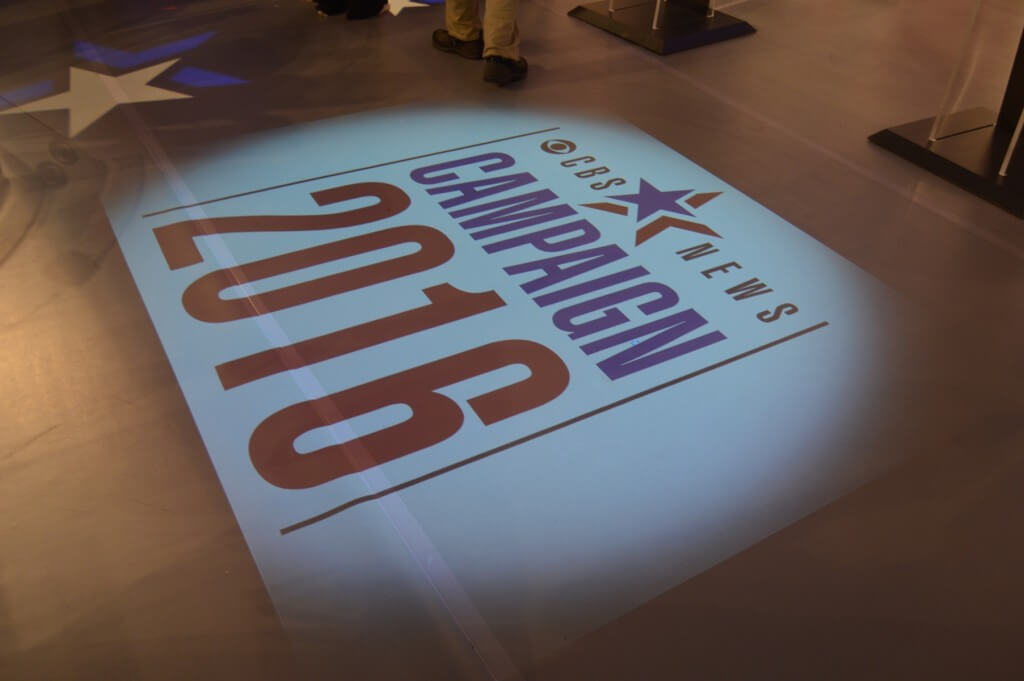 The moderators’ chairs and the screens on their desks: 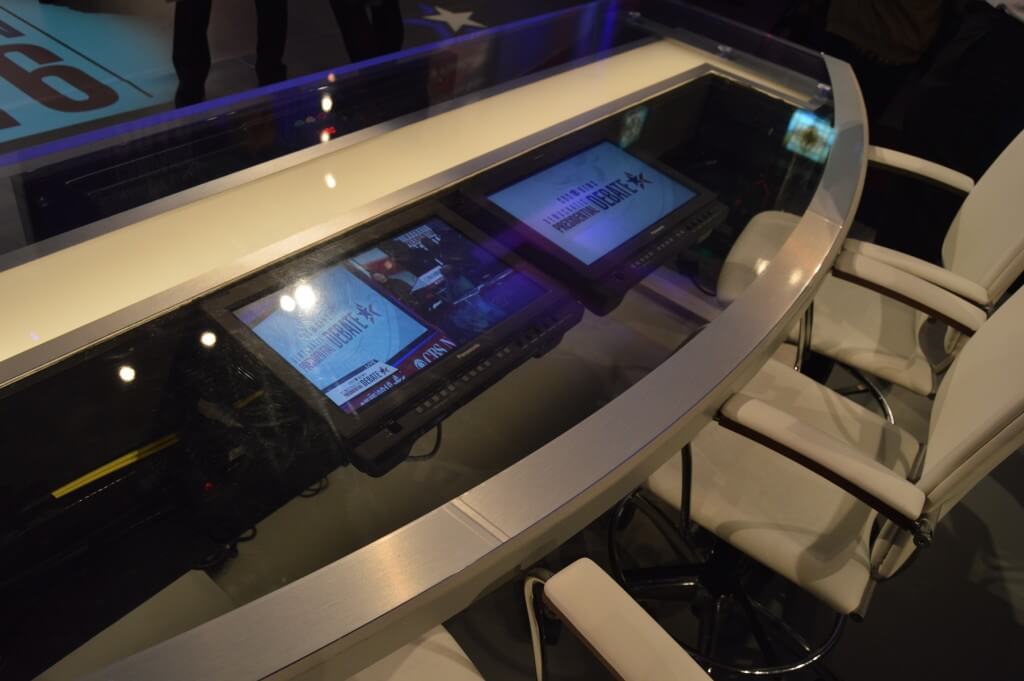 Most importantly, the timer: Here’s what the candidates will see looking out into the auditorium: The setup for the debate has been going on all week, with huge trailers set up all over campus: 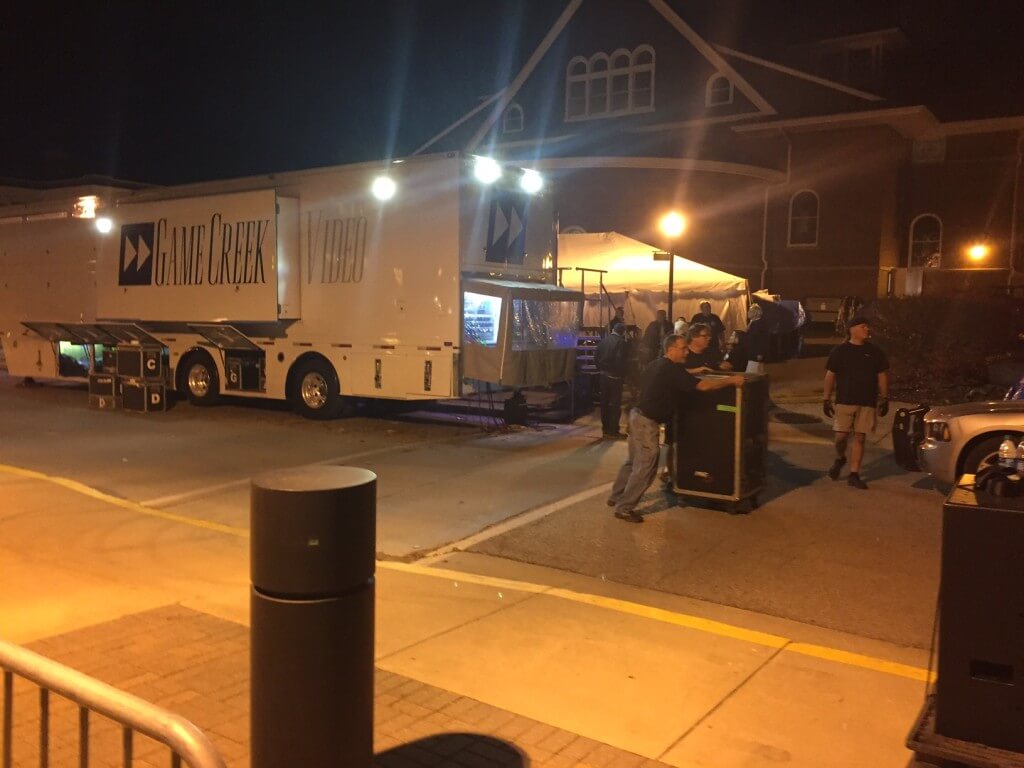 It sounded like the campaigns were originally going to stage another round of large sign wars today. After the events last night in Paris, it sounds like things are being scale back with no rallies. Some O’Malley cars are parked along the street, but that’s about it: 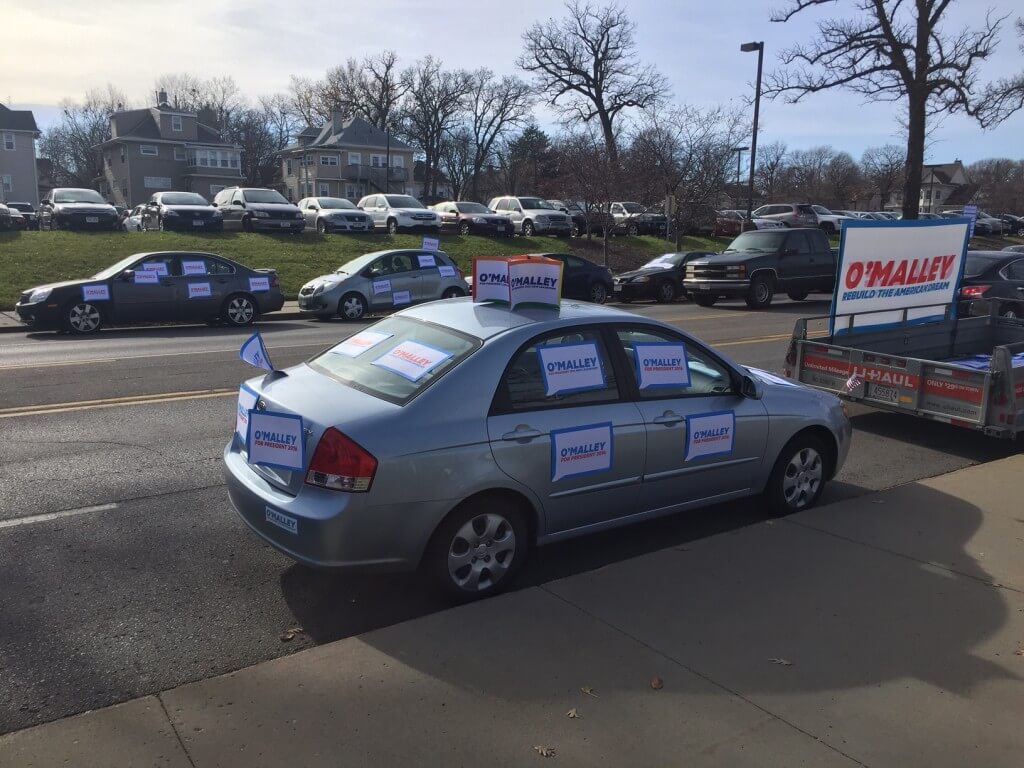 Each campaign has chalked the sidewalks on campus heavily for their candidate (O’Malley’s put many turtles around campus, reference his slow-but-steady campaign): 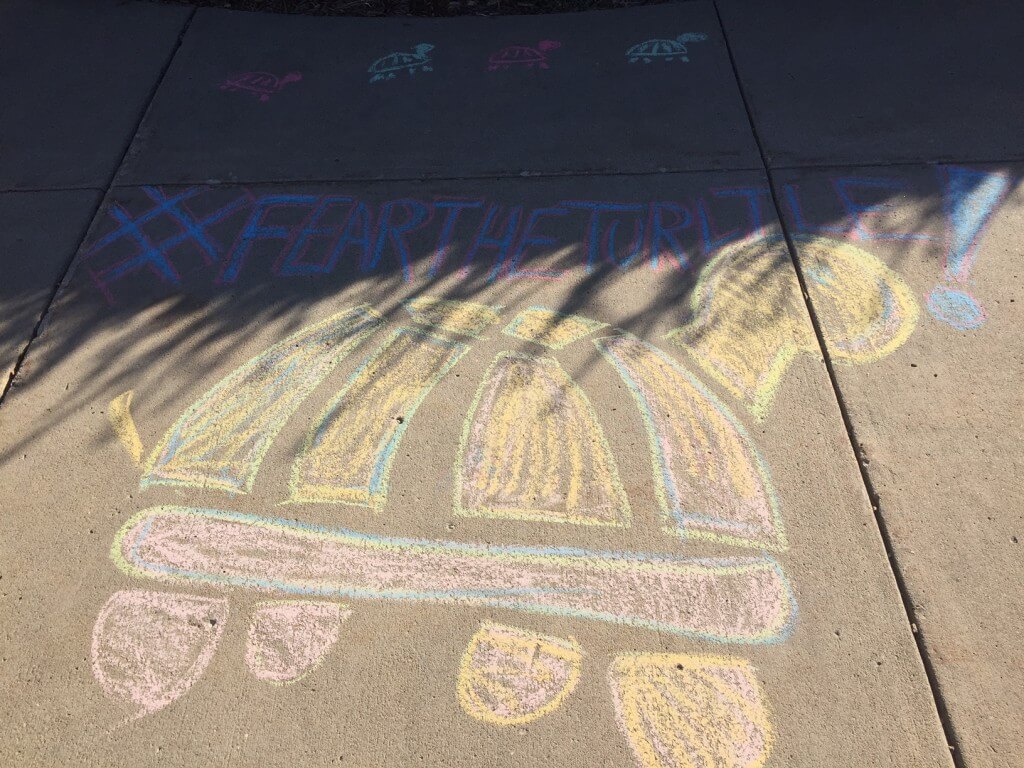 A Pancakes and Politics event was held on campus this morning. Each campaign set up tables and talked with students. DNC Chair Debbie Wasserman Schultz did a Q&A there: 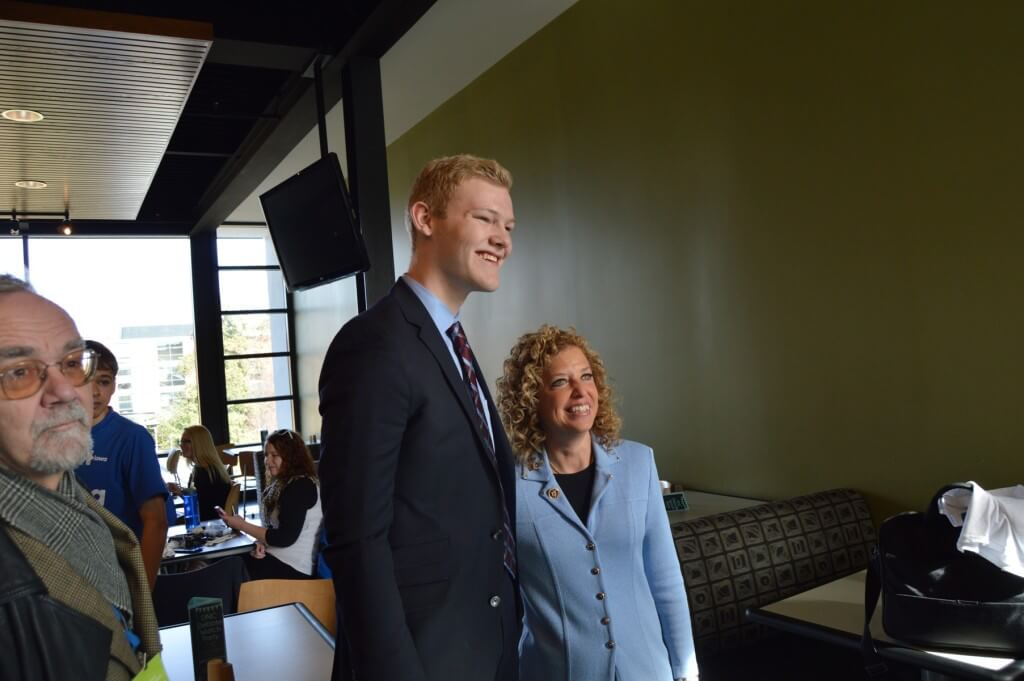 Students wrote on a board the issues that are important to them: 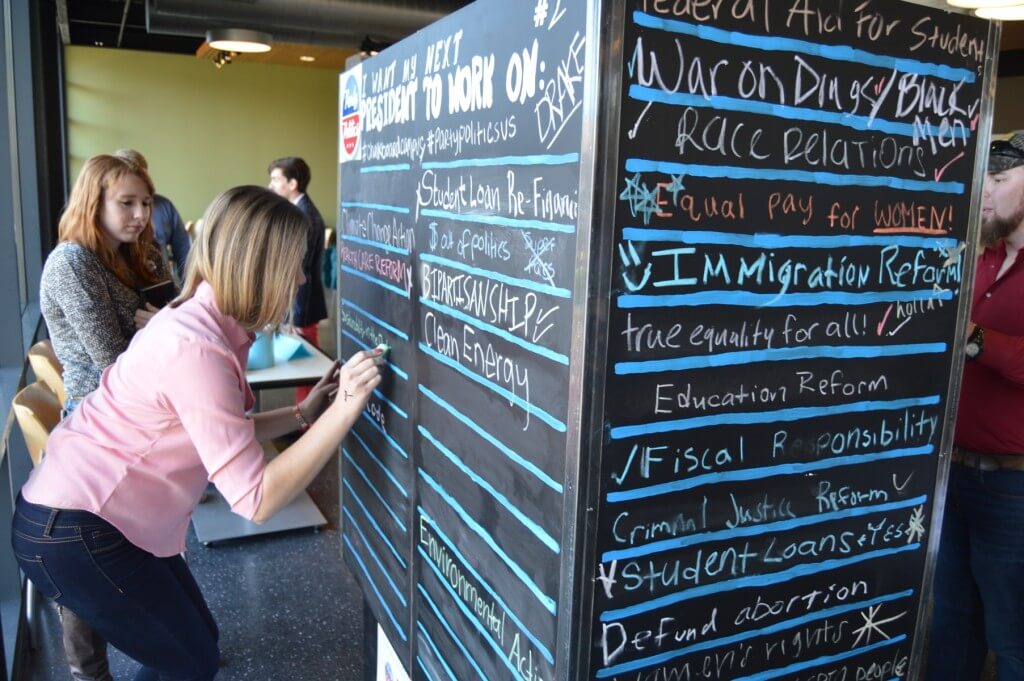 Students and staff from each campaign spoke with students: 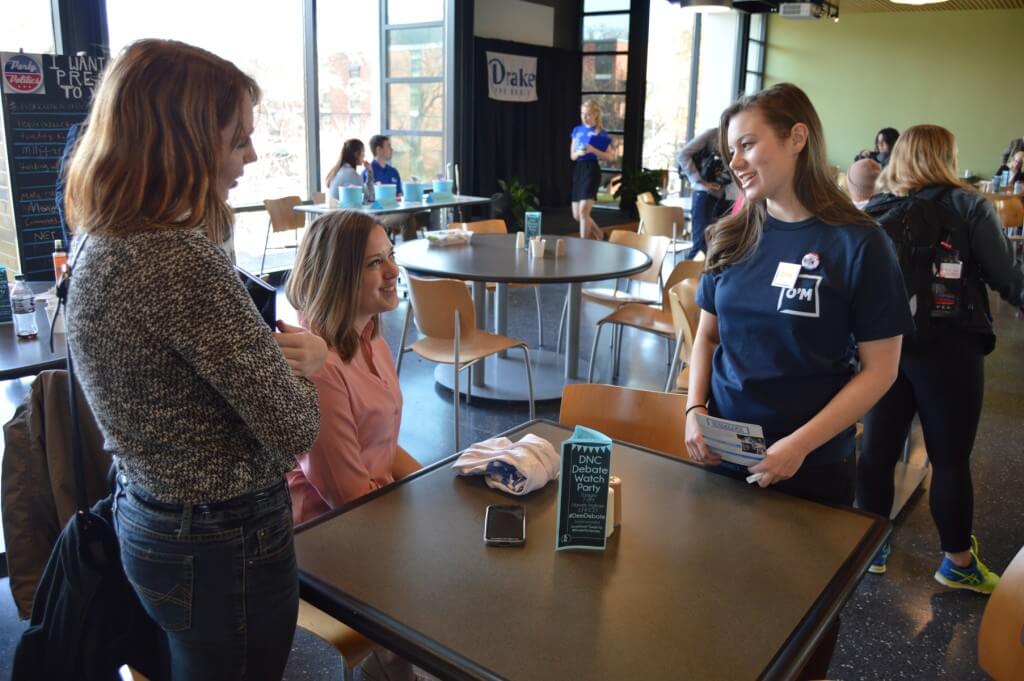 Griff the Bulldog, Drake’s live mascot this year made an appearance. He is also announcing his run for President: 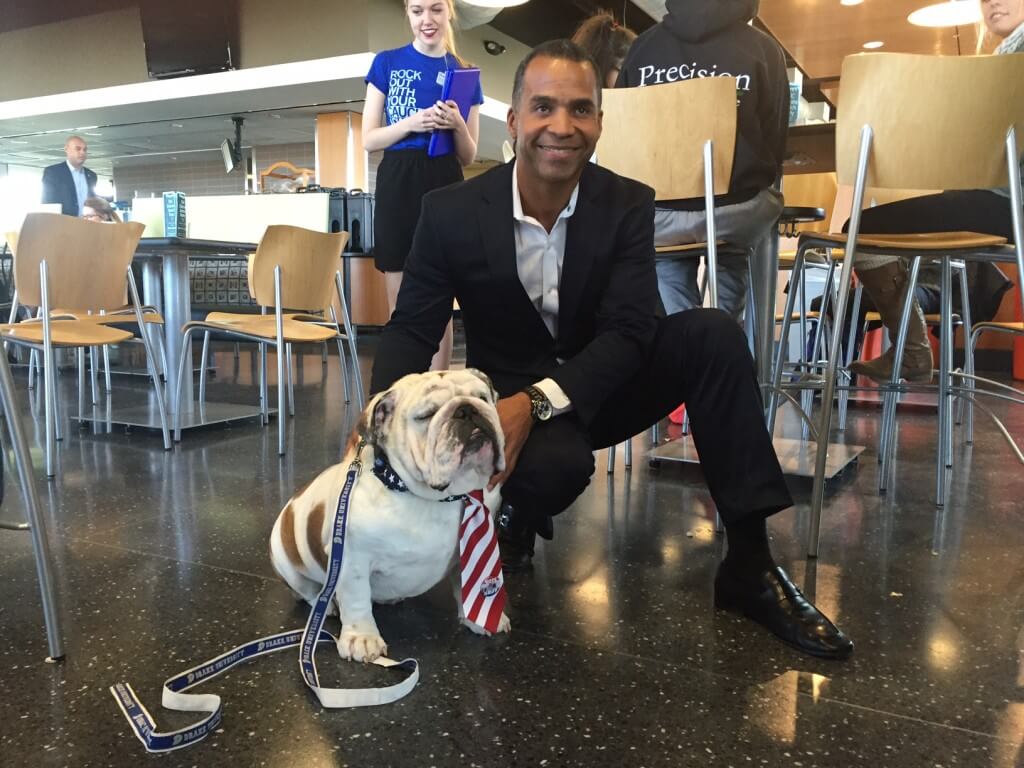 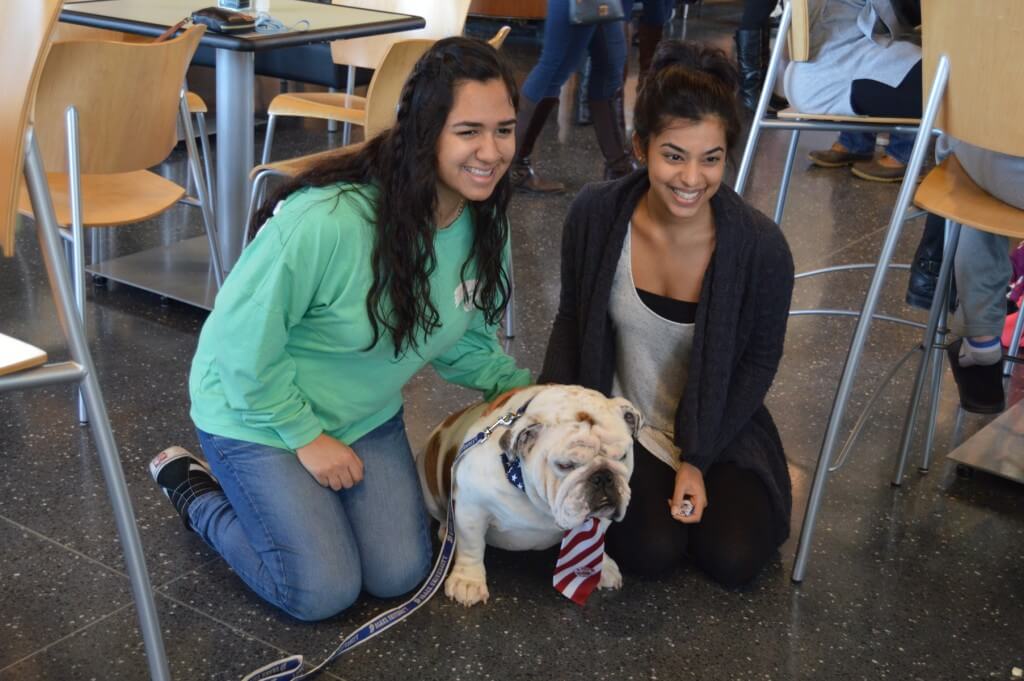 DNC Chair Wasserman Schultz has been around campus and Des Moines a lot the last two days. She held a round table on issues affecting working families yesterday: 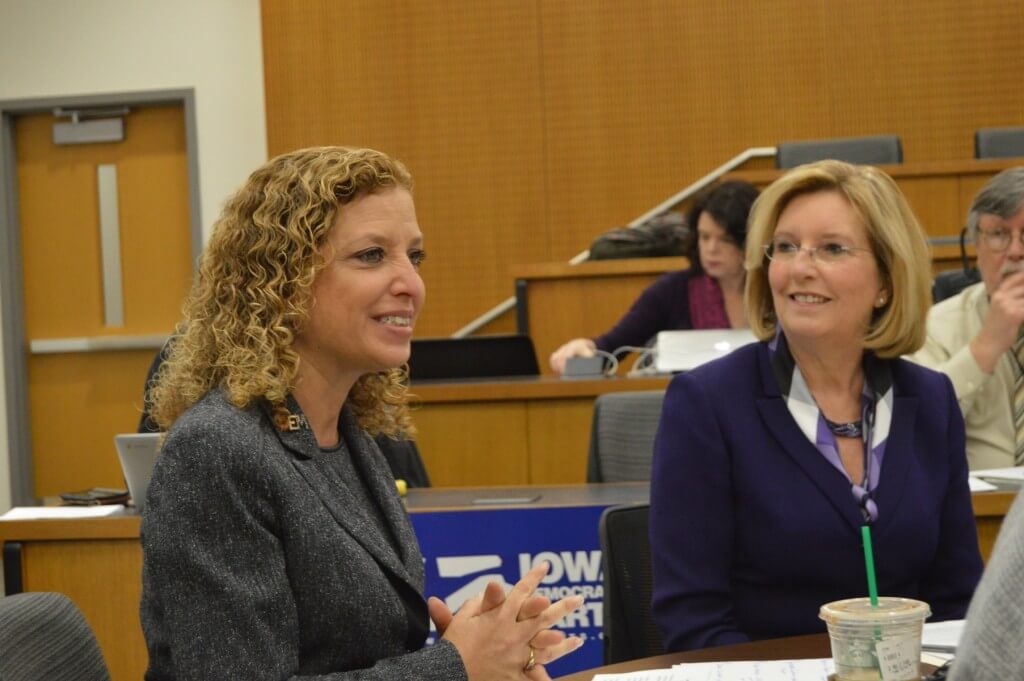 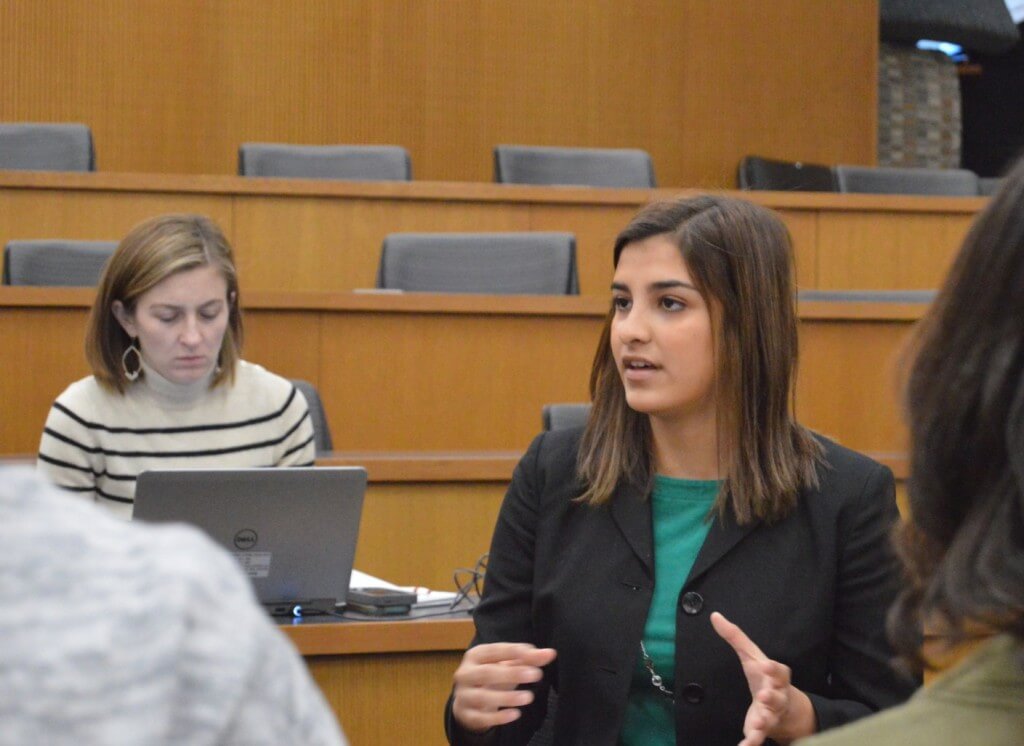 Last night the Make It Works issue group held a free event in the Marriott Hotel downtown, talking up their issue of equal pay. Donna Brazile stopped by: 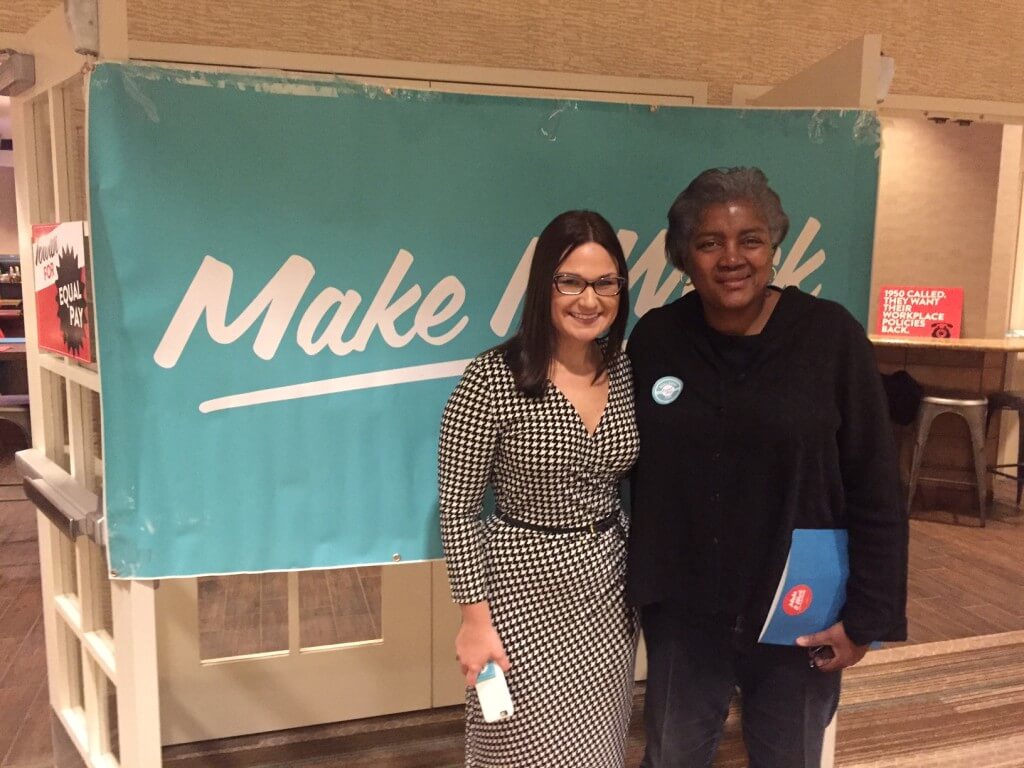 The Drake Democrats got together yesterday to make signs for the debate, which IDP chair Andy McGuire dropped by. Many of them have gotten special opportunities to help with either the debate preparation or the earlier Yahoo News event: 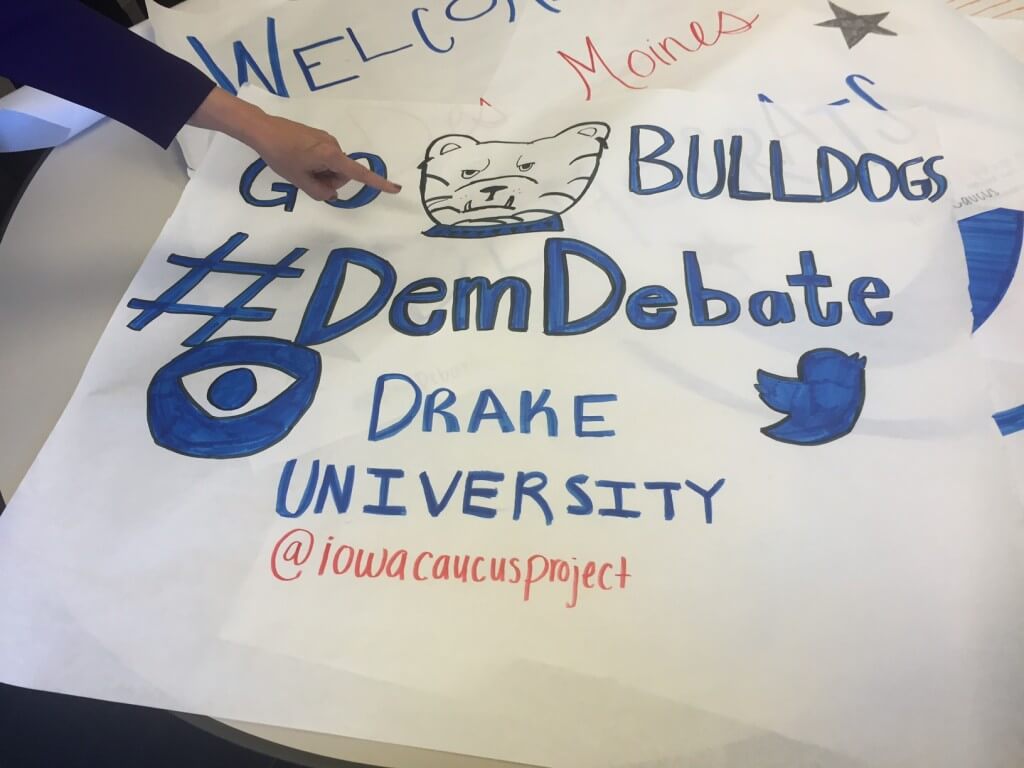 Tons of media are obviously in town for the event: 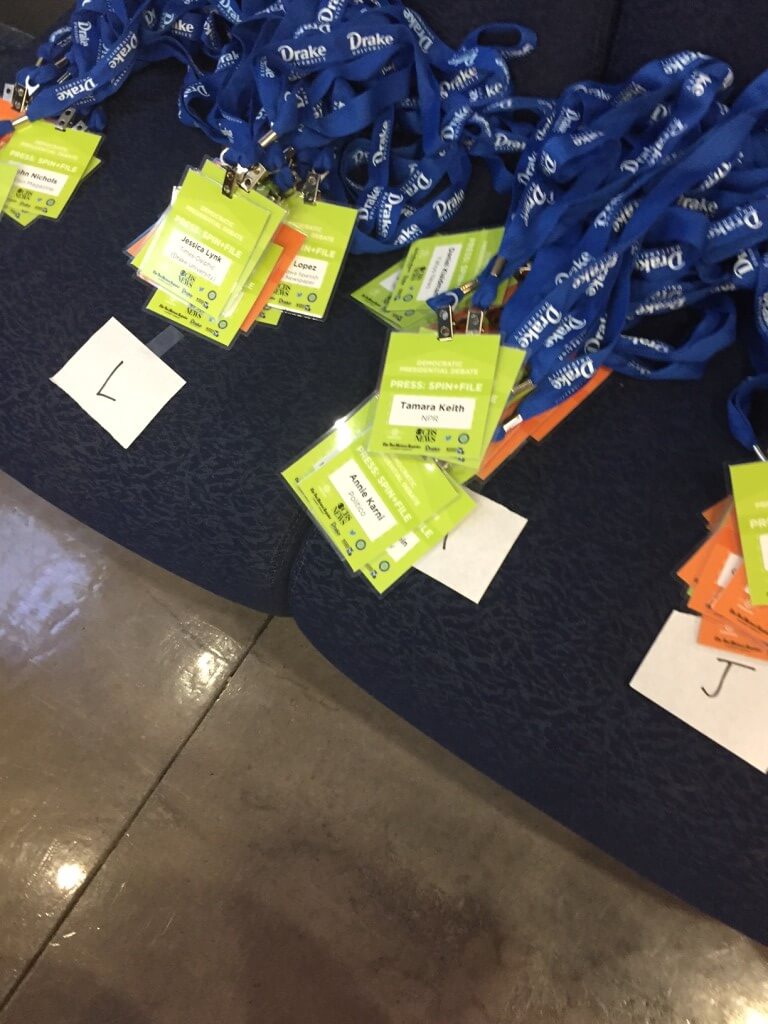 Here’s the press file room Starting Line will be spending most of the day in: 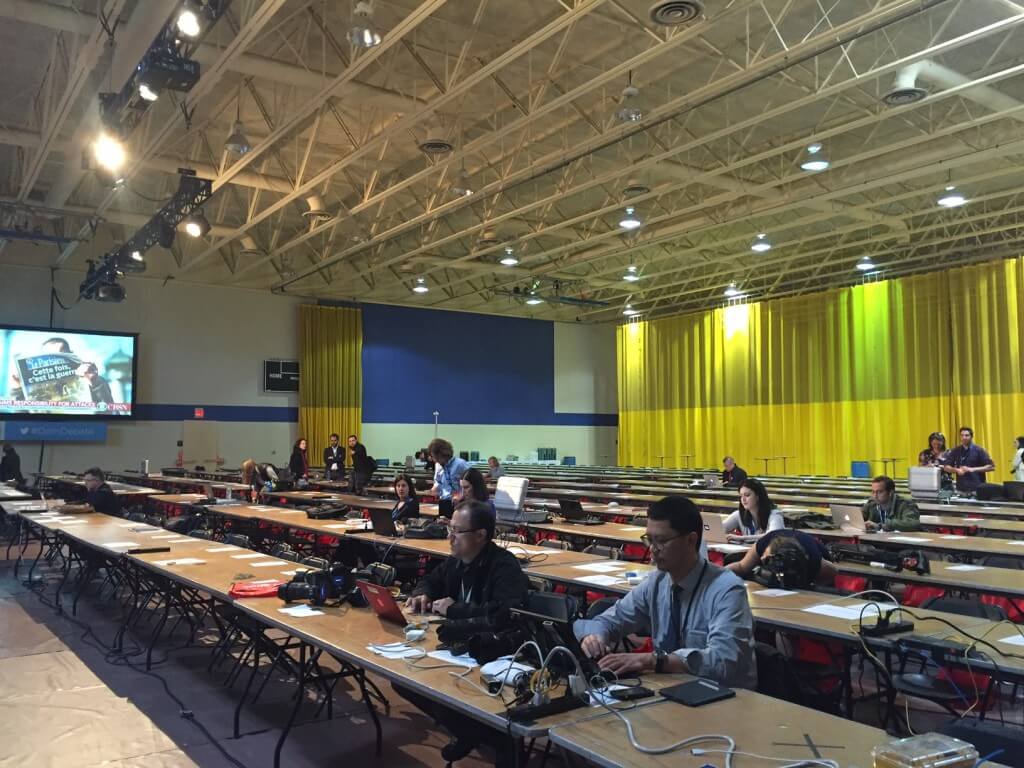 Earlier in the week Drake students were treated to both a Yahoo News Digital Democracy day-long forum, and an NPR taping that brought in a group of students and professors to discuss youth voting: 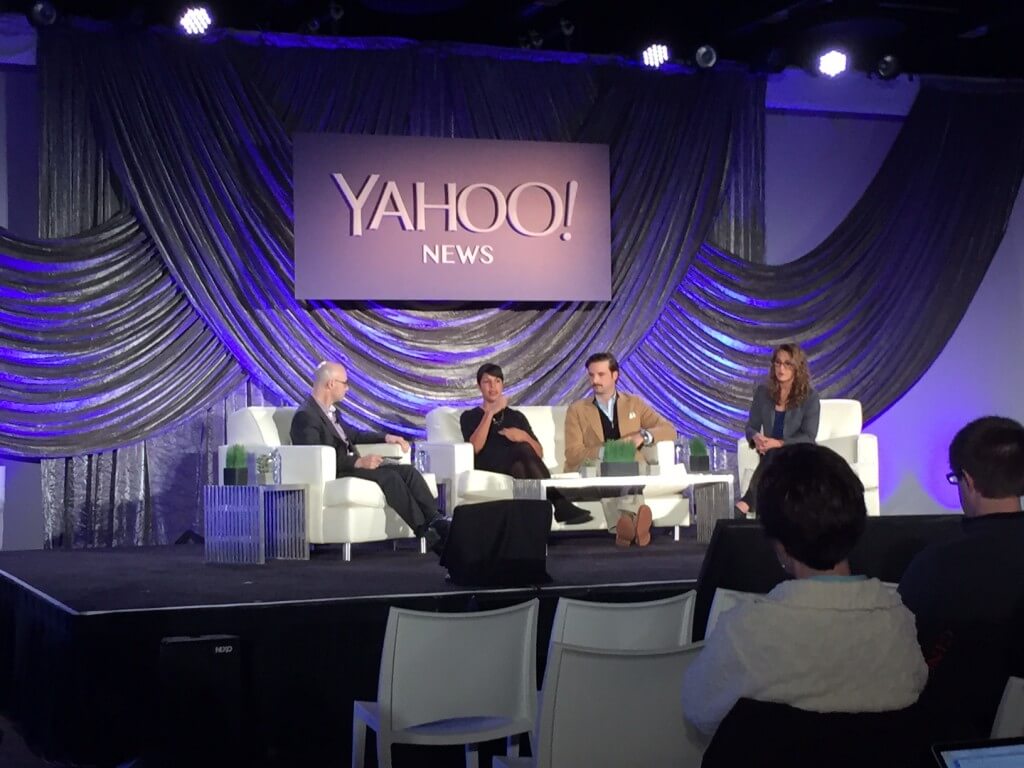 That’s all for now, watch us on Twitter for tonight’s debate and check in tomorrow for our recap and analysis.