Wednesday afternoon students, professors, and activists gathered in the Biorenewable Complex at ISU to kickoff Senator Hogg’s Climate Solutions Tour and open a discourse around the UN Climate Negotiations in Paris this December. The discussion, hosted by the Climate Reality Project, featured a diverse group of concerned individuals familiar with the industries, policies, and environmental practices here in Iowa.

“The science is clear: we must urgently act to safeguard our people and our property from the dangers of climate change,” said State Senator Rob Hogg of Cedar Rapids.  “The good news is we have many solutions that work for our businesses, our workers, our farmers, and our health.”

The Climate Reality Project has been working to mobilize students in Iowa to raise their concerns around climate change and to build support for a strong, ambitious agreement in the upcoming UN Climate Negotiations, also known as COP 21. At ISU in particular, student leaders have taken it upon themselves to be an outlet for the student body to voice their climate concerns to their representatives. In only two months the Climate Reality Project at ISU has gathered nearly 3,000 petitions from students, as well as rallied hundreds of students to attend events as an expression of their support for climate action.

“Millennials across the country understand the science and severity of climate change,” said Climate Reality Project organizer Joseph Heegaard. “We have the technology, the passion, and the resources to realize the solutions available and pave the way for a safe, sustainable, responsible future.” 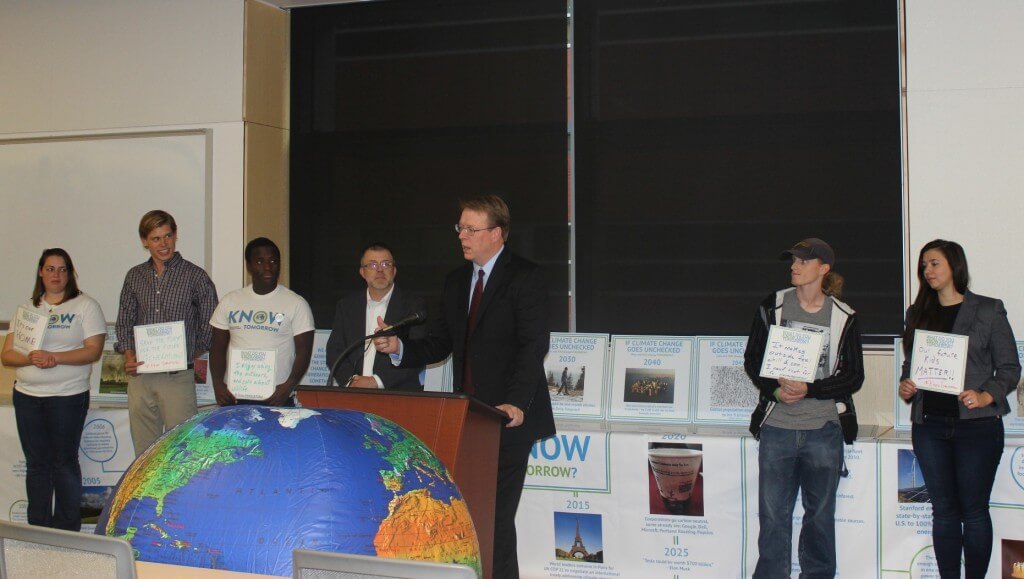 The Climate Reality Project has established student groups in over 60 colleges and universities across the country and aims to deliver 100,000 petitions to President Obama from the Millennial generation alone preceding the Climate Negotiations. The Negotiations will take place in Paris this December and have received widespread attention as world leaders from 195 countries prepare to establish regulations on the green house gas emissions causing climate change.  The overarching goal of the negotiations is to reduce the quantity of these emissions in attempt to avoid a global temperature increase of 2° C (3.6° F), which would likely be catastrophic to coastal cities and certain large-scale industries.

Come Friday, November 13, the Climate Reality Project at ISU will conduct a panel consisting of professors, students, and community members to open a discourse on the efficacy and extent of the proposed emissions regulations.  The panel will address the urgency and ramifications of climate change, as well as the economic feasibility of the regulations set forth at the UN Negotiations.  Senator Rob Hogg will continue onto his multiday statewide climate solutions tour in effort to explain just how practical and attainable renewable energy solutions are, as fossil fuels become the energy source of the past.

Climate Reality Project began in 2006 and is a nonpartisan, nonprofit organization that works to catalyze a global solution to the climate crisis by making urgent action a necessity across every level of society.